But there are several aircraft features designed to be invisible to passengers that might change the way you fly. From a secret button to give you more wiggle room in your chair, to a hidden handrail to grip onto while walking down the aisle, there's more to your plane than meets the eye.

Read on to find out more…

The armrest next to the aisle may appear to be an immovable object, but if you search underneath towards the back you will be rewarded with a button. 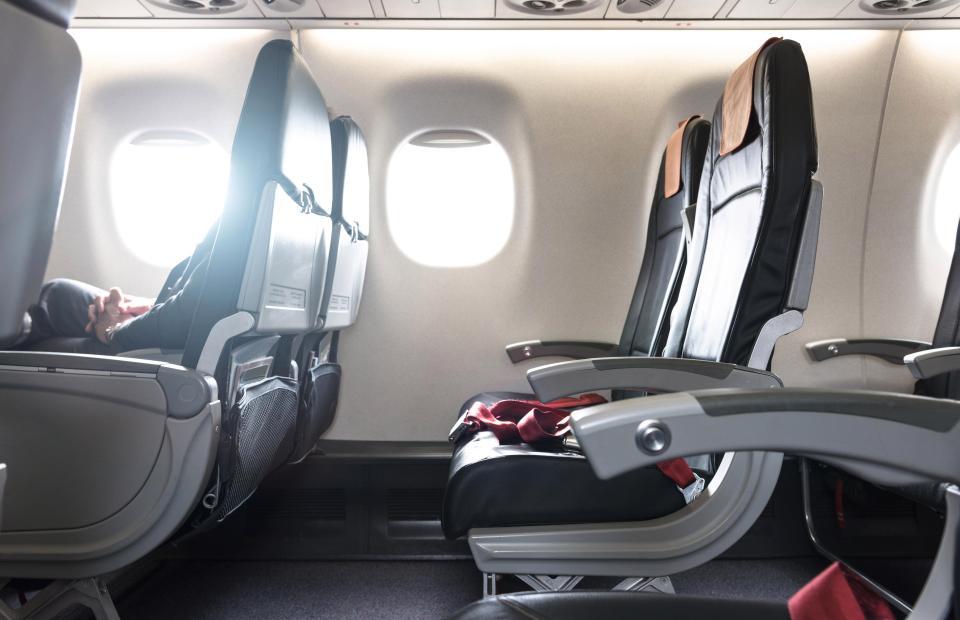 Press it and you are able to move the armrest so it’s flush with the back of your seat to gain precious extra millimetres of chair width.

It also makes it a lot easier to get up from your seat when the tray table is down.

The windows aren’t just for holiday photos, they are part of the plane’s safety features – the easiest way to check up on a wing mid-flight is to look out the window.

The best view for assessing the airworthiness of the wing is marked by an innocuous-looking black triangle. 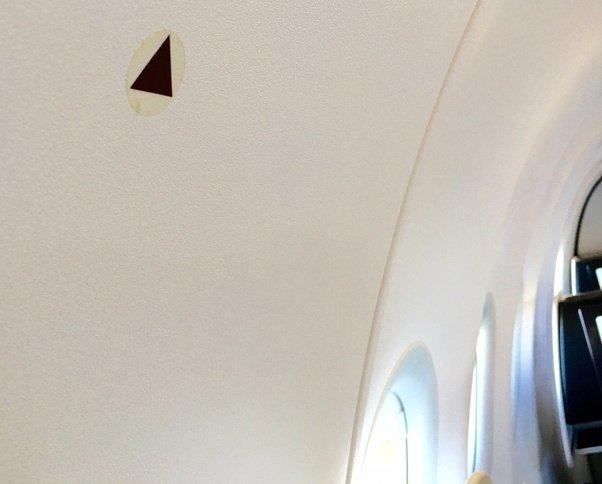 Retired aerospace engineer Lee Ballentine wrote on website Quora: “The black triangle marks the location of what has been called the ‘William Shatner Seat’, or the seat with the clearest view of the wing.

“The Shatner reference is to one of the strangest Twilight Zone episodes, “Nightmare at 20,000 Feet”. In it, Shatner’s character sees a gremlin on the wing of the plane he’s a passenger on.” 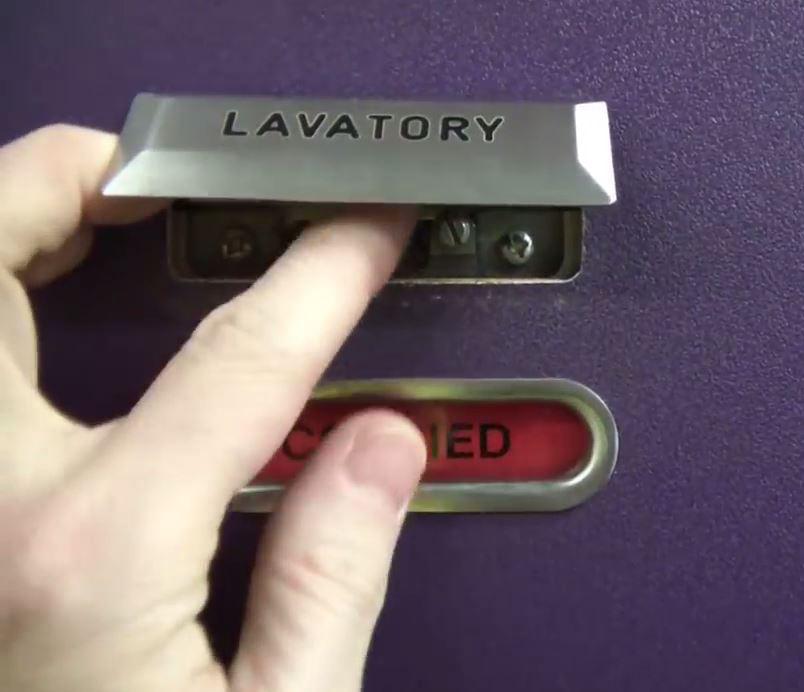 In the event of an emergency, cabin crew can access occupied toilets by using a small button.

The hidden latch, often behind the no smoking sign, allows crew to access the toilets in an emergency.

If unruly passengers overstep the mark, they could find themselves in cuffs and being handed over to airport police.

These aren't the typical metal handcuffs though, it’s far more likely that cabin crews are issued with cable ties as restraining tools.

Meanwhile, since 9/11, sky marshals on flights to and from the US have been allowed to carry concealed weapons on planes – they function as undercover armed escorts, ready to leap into action should the need arise.

Just who is “packing heat” is kept a secret from even the cabin crew though – in August a United Airlines steward caught a glimpse of a marshal’s gun which caused an emergency landing — with the marshal arrested, mistaken for a rogue passenger with a gun.

A defibrillator is also found on most aircraft, to be used if any passenger suffers a cardiac arrest. 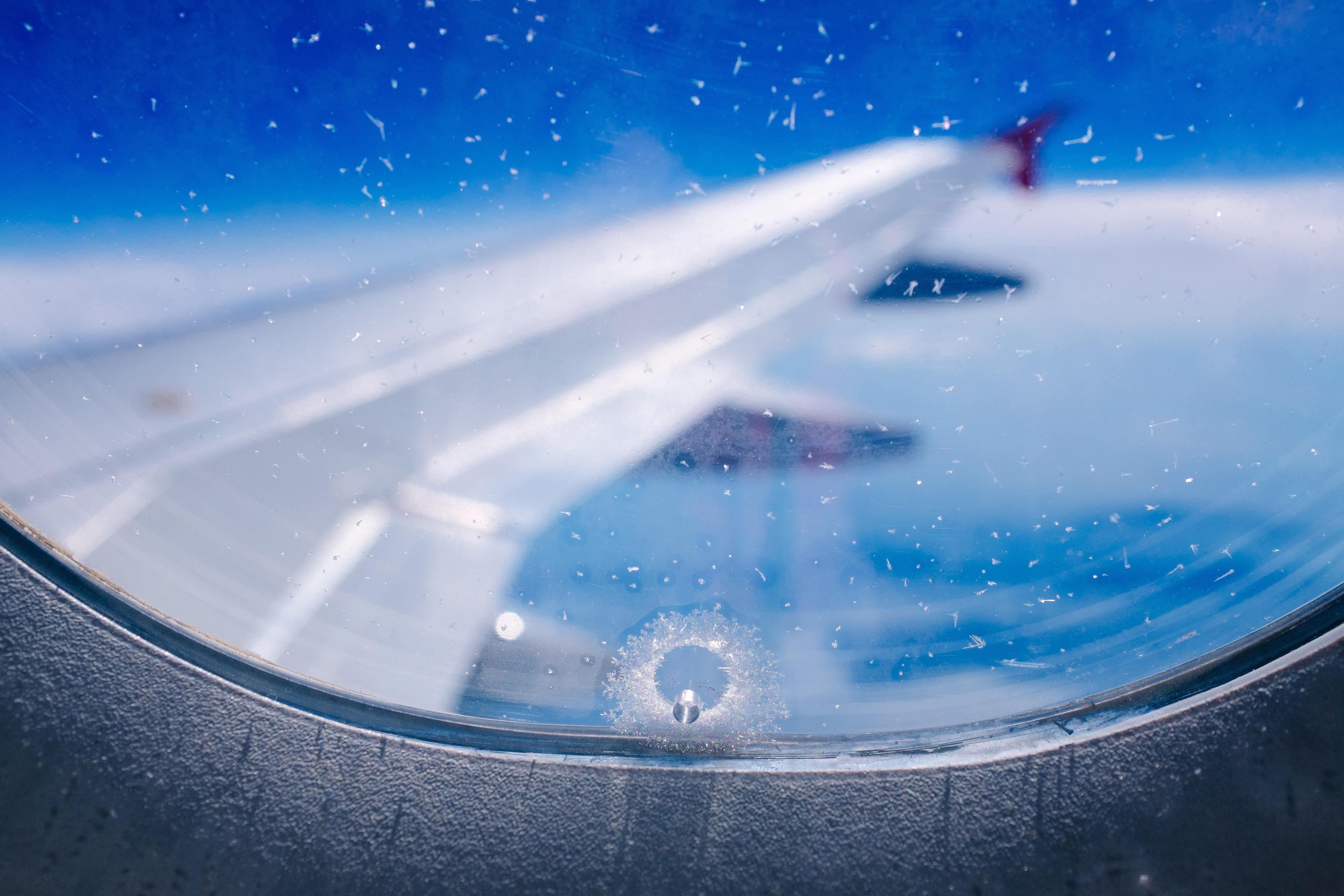 In the middle of the triple-glazed reinforced aeroplane windows, there is often a hole.

As air cabins are pressurised, the plane needs some sort of safety valve for the enormous load on aircraft windows. The hole you see is only there to take pressure off the inner pane of glass.

Swirling above your head is a cocktail of chemicals ready to explode into action. Should your cabin depressurise and those yellow face masks drop into your lap, you won’t have much time to think about the details. But it’s an incredibly complicated process.

It wouldn’t be space or weight-efficient to provide every passenger with an aqualung. Instead there is a mixture of barium peroxide, sodium chlorate and potassium chlorate — powders and liquids which react violently together to rapidly produce oxygen. 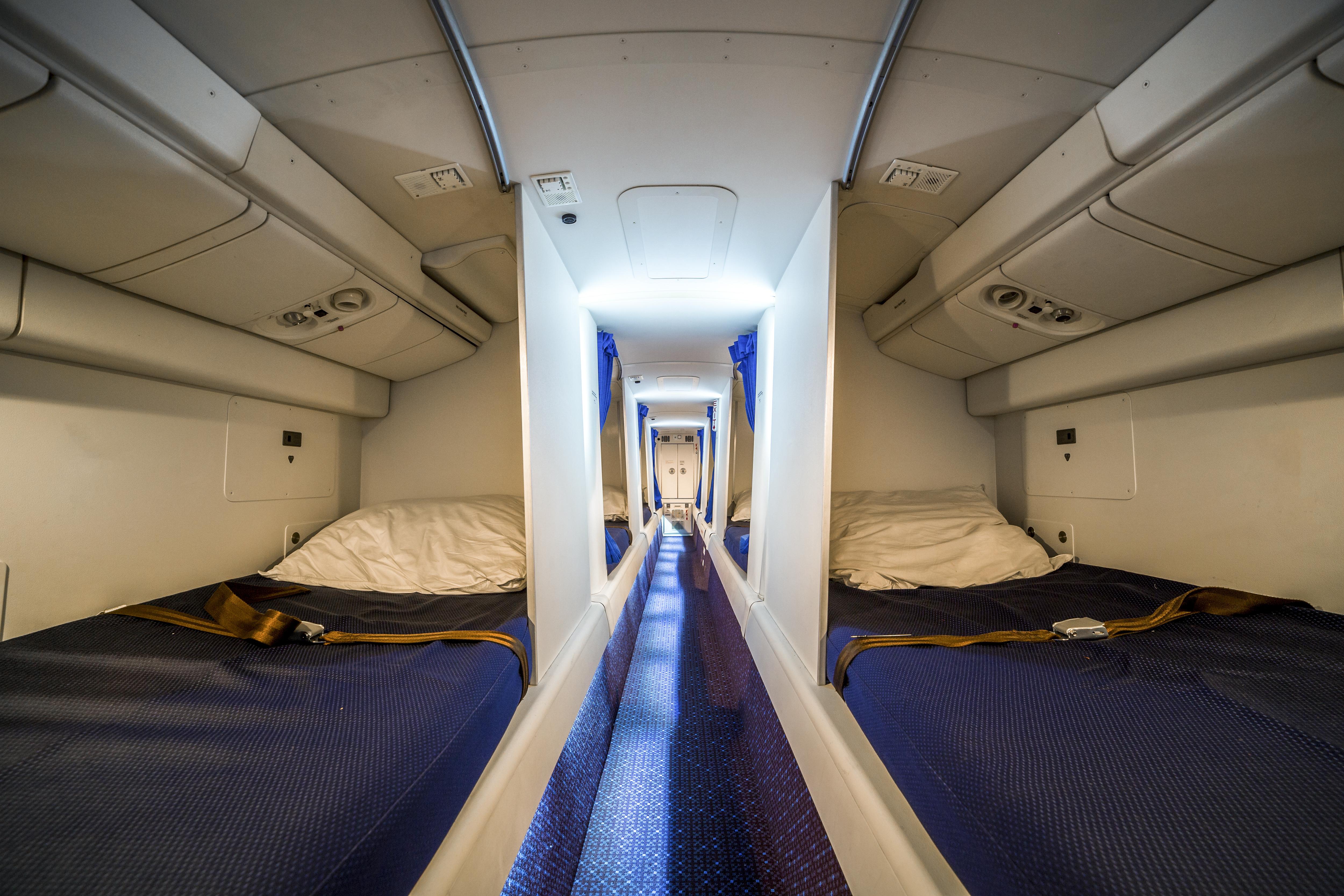 Have you ever wondered where the crew go to get away from the passengers?

Most long-haul aircraft are designed with crew compartments for attendants to nap and take a break.

8. Grab handles on the emergency exit

The large handle on the emergency door might be considered over-engineered, but this is a “calming measure”.

Evacuating passengers tend to be a bit panicky, so providing a handle to hold onto can slow down the escape, which also helps to maintain an orderly queue for the emergency slides. It’s also something for attendants to hold on to, to avoid being barged out of the way. 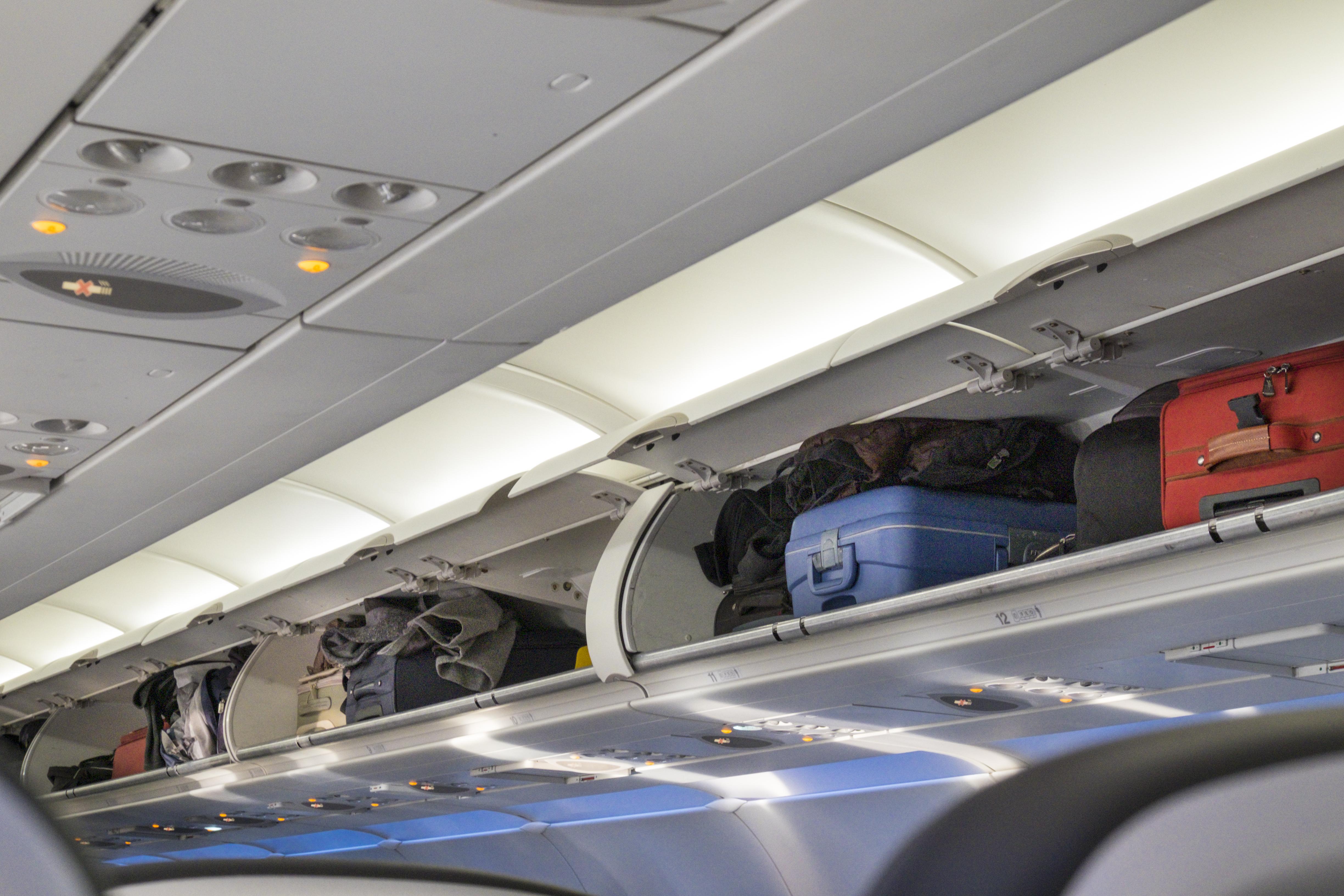 If you need to traverse the cabin without grabbing the backs of sleeping passengers headrests, there is a more considerate way.

Along the skirting of the overhead bins there is sometimes a handrail moulded into the fuselage.

Since the ban of smoking on most airlines, why new planes still have ashtrays built in is a mystery to most passengers.

But health and safety regulations stipulate that there must be a safe place to stub out a cigarette mid-flight, if someone sparks up illegally.

Should someone ignore the rules – and they still do – it’s better to have the trays in the bathrooms than have smoking embers disposed of in the bin. 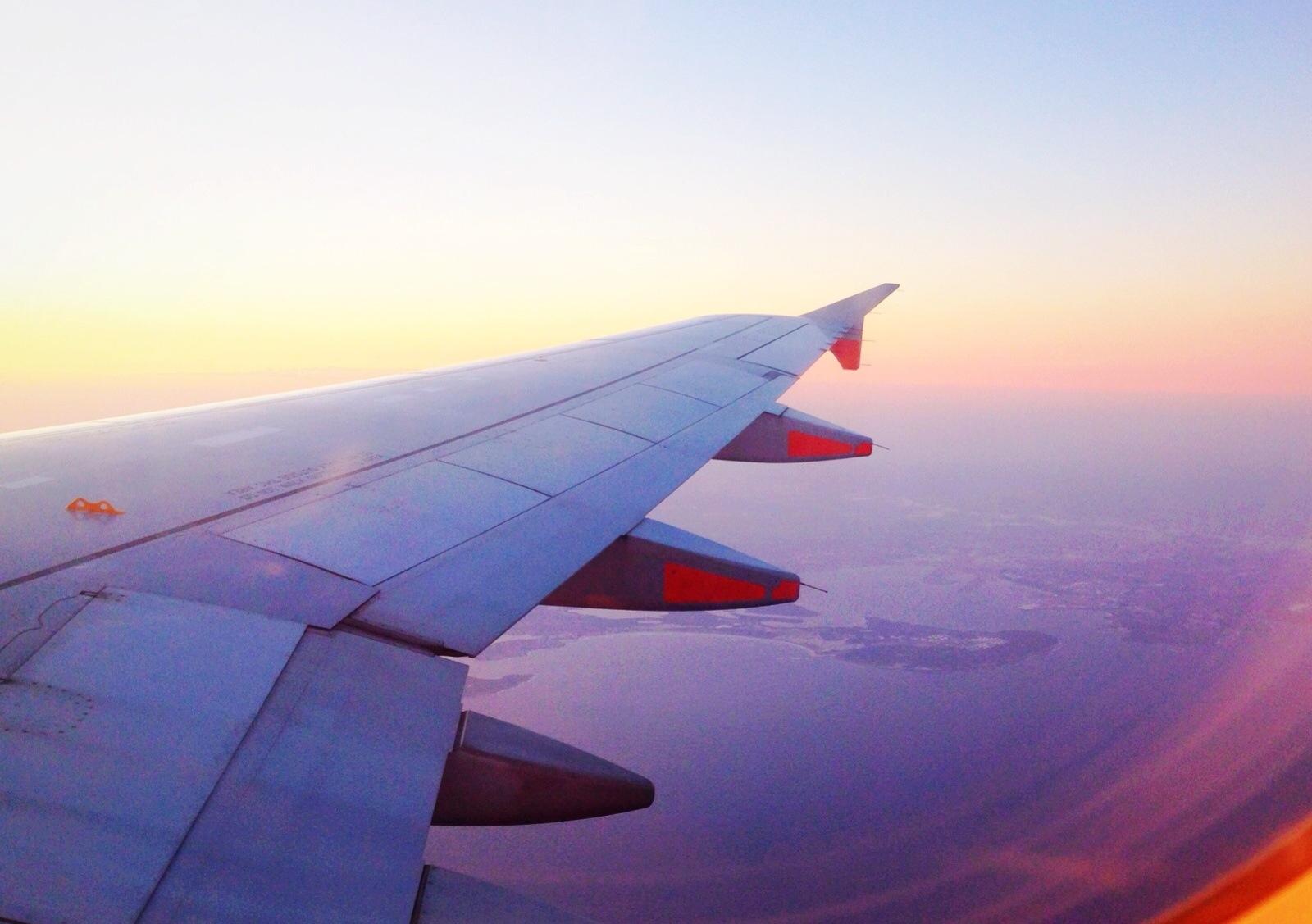 Hopefully you will never have to make use of these curious little features. However, in the event of landing on water these hooks on the wing are rudimentary handholds.

As in Captain Sully’s “Miracle on the Hudson”, rope can be attached to the hooks for easier escape by passengers over the wing.

Flight attendants are issued with gas masks. Instead of those restrictive yellow masks on strings which passengers get, gas masks free them up to move through the aircraft and address any problems.

This story originally appeared on the NZ Herald and was republished with permission.