Want a peaceful Ibiza experience? Now is the time to go

Party off: MailOnline hops on a British Airways flight from London City Airport to Ibiza – and discovers that NOW is the perfect time to visit for a peaceful experience on the island

July is high season for party hotspot Ibiza and it would normally be thrumming with tourists with a yen for sun, sea and unbridled hedonism.

This summer, however, the island has a very different tempo. The streets are quiet and while some places are open, the superclubs like Amnesia and Privilege remain shut until at least next year.

So, is it all masks and antibacterial gel on the White Isle? Well, sort of. 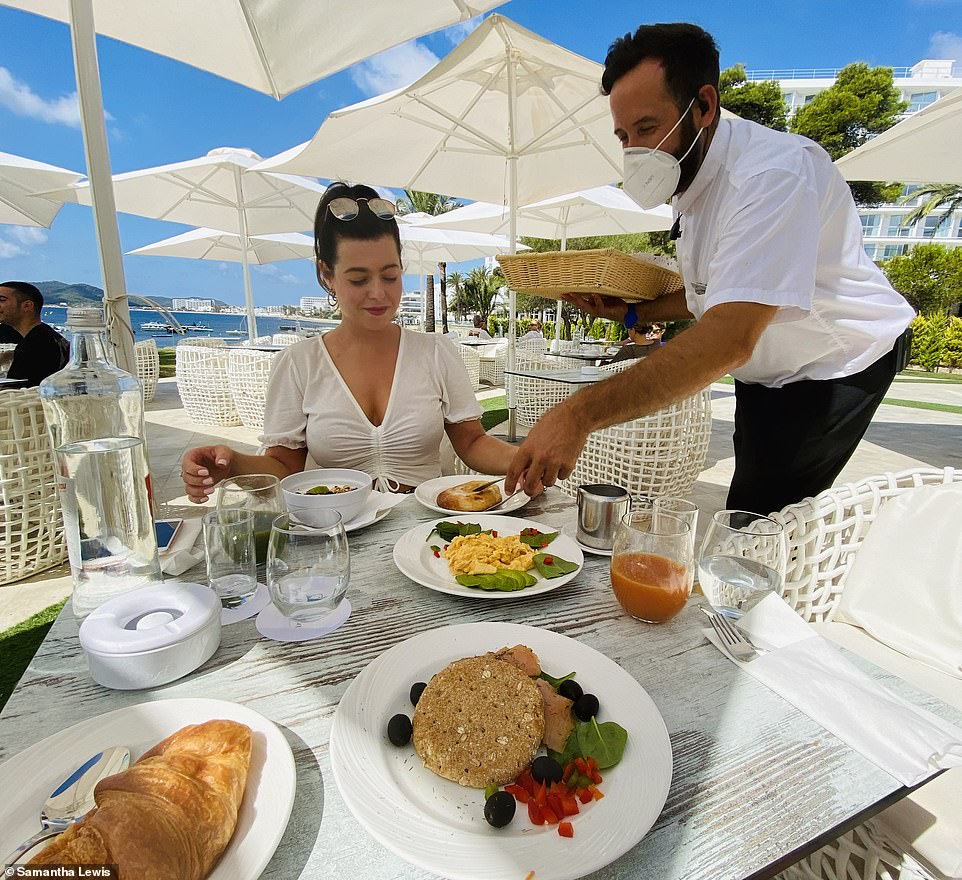 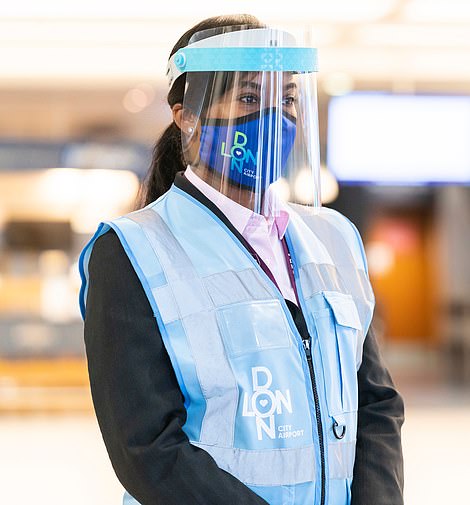 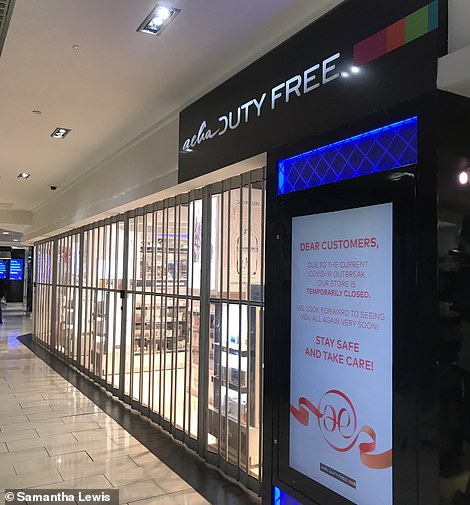 Pictured left is a member of staff at Covid-ready London City Airport. Samantha snapped the image on the right, of the closed duty-free shop, as she passed through the airport to her BA flight to Ibiza 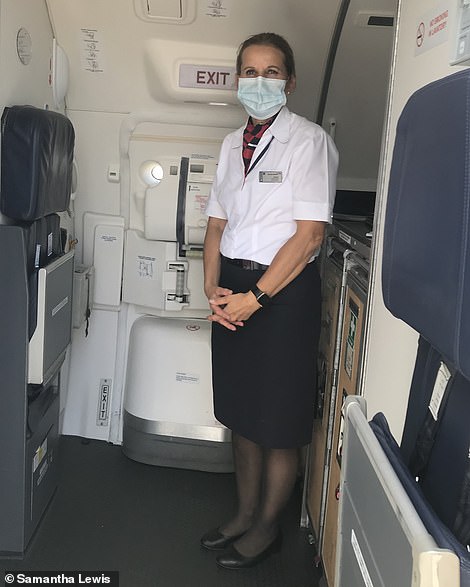 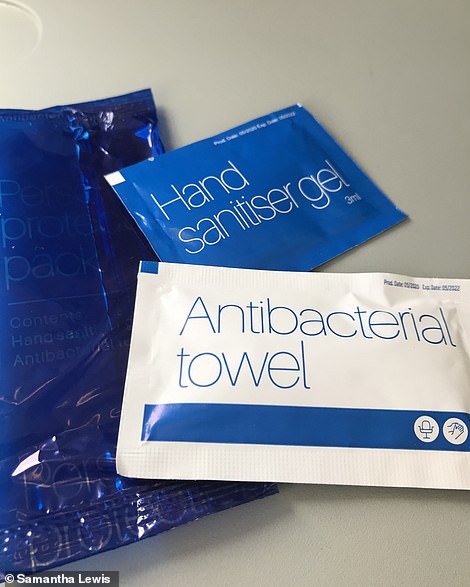 A BA stewardess greets Samantha as she boards her flight, left. Pictured right are the anti-coronavirus products given out to passengers for free 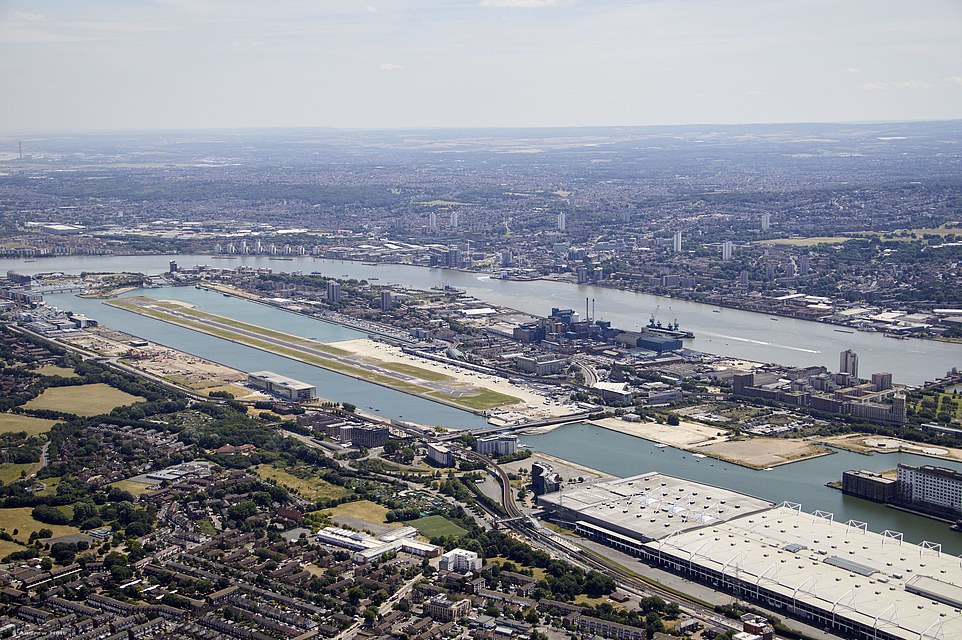 London City Airport is the only airport actually in London. It lies three miles from Canary Wharf and six miles from the City of London

I travelled to Ibiza a few days after the air bridge to Spain came into effect, which means Britons can now visit without having to quarantine on their return.

I was excited, but a little anxious, arriving at London City Airport. Check-in was deserted and I breezed through without having to queue. The duty-free shop was closed, but you could grab a coffee and last-minute toiletries if needed. Everywhere was very clean and people were being sensible about social distancing as we waited in the departure lounge.

My BA flight was almost full, so I was sitting next to someone – but masks are mandatory and were worn throughout the entire flight. Don’t expect an onboard tipple as alcohol isn’t being served but you are provided with a carton of water and pack of biscuits, alongside a sachet of antibacterial gel and a wipe. 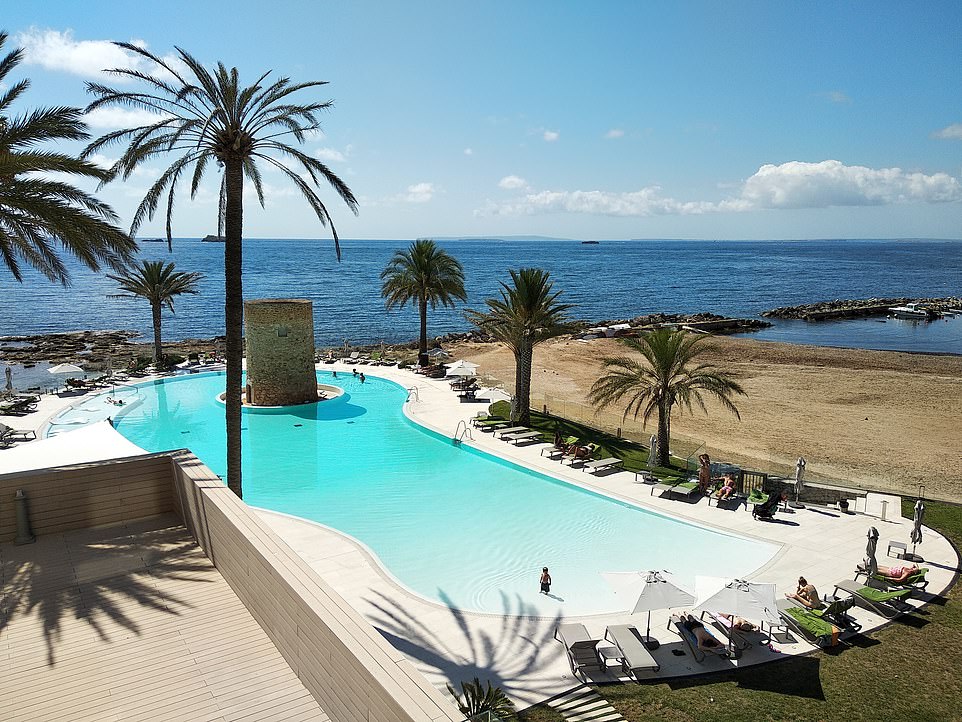 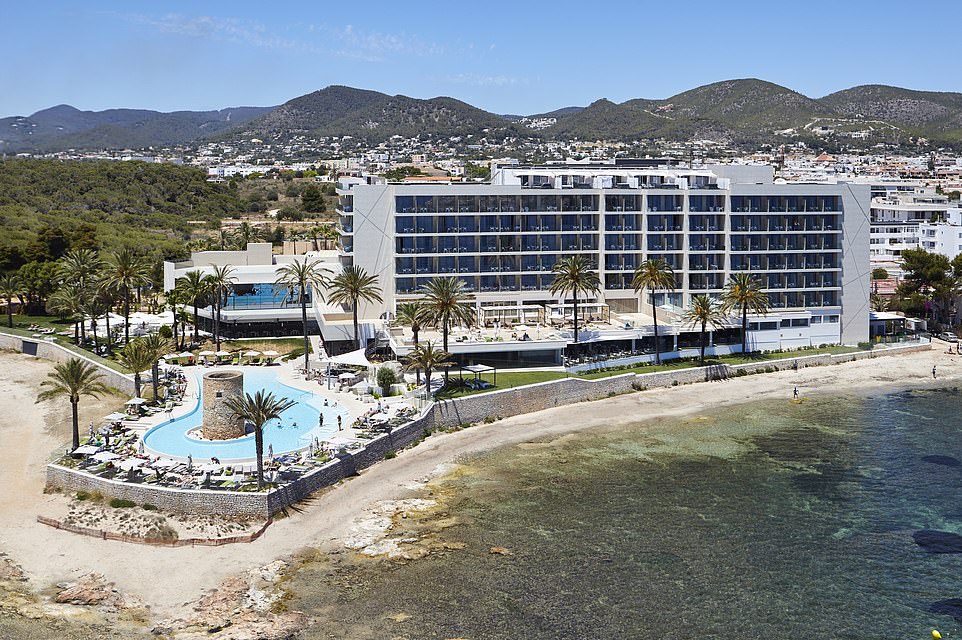 The hotel was 30 per cent full, so it was easy to social distance, writes Samantha 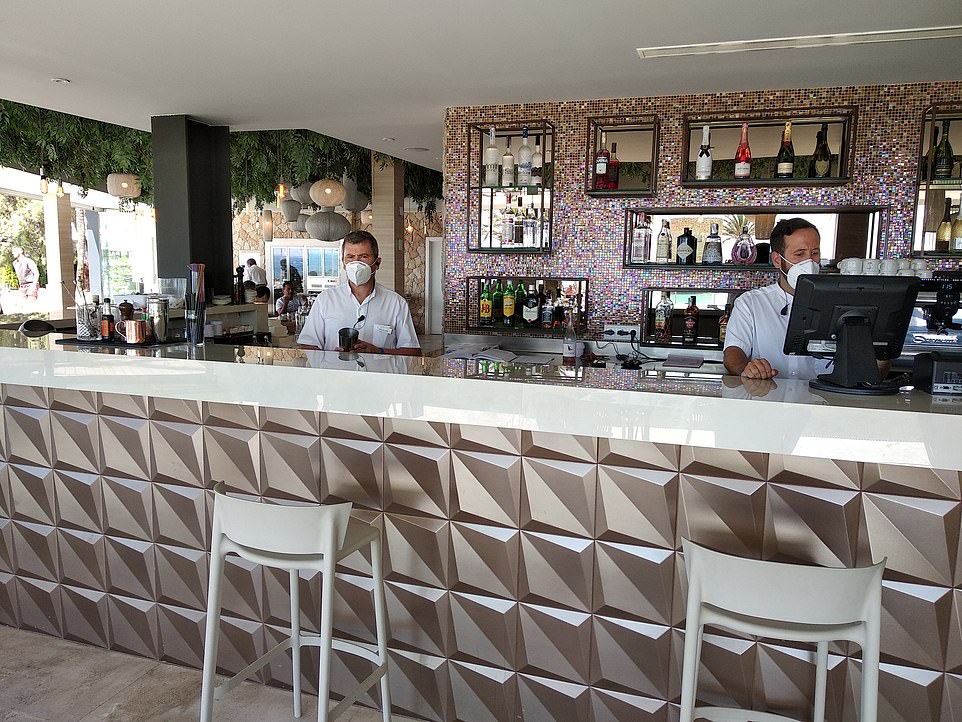 Masks at the hotel are compulsory, except for the swimming pool and restaurant

The scene was similar when we landed at Ibiza Airport. There wasn’t the usual gaggle of hen parties and lads on tour, just a few people milling around. You have to fill out a mandatory health form and have your temperature taken – but it’s a swift process.

From there we headed to our hotel, Hotel Torre del Mar in Playa d’en Bossa. The hotel was 30 per cent full, so it was easy to social distance.

The Spanish are stricter about wearing face masks, which meant we had to wear them around the communal areas except for the swimming pool and restaurant. 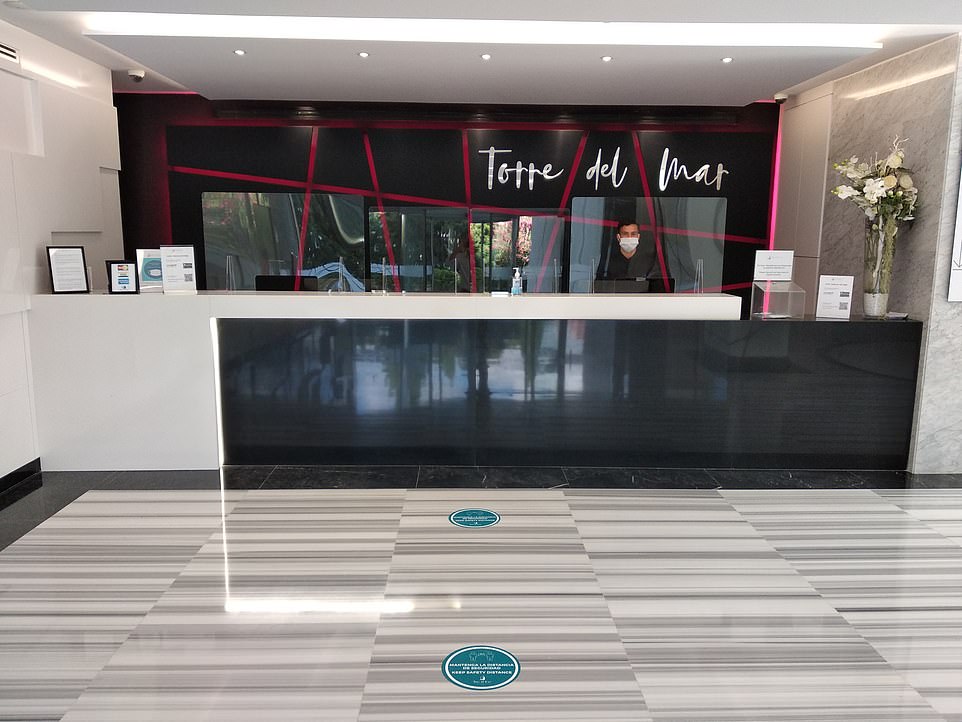 The glitzy reception desk at Hotel Torre del Mar, with a staff member in a mask and social distancing markers on the floor 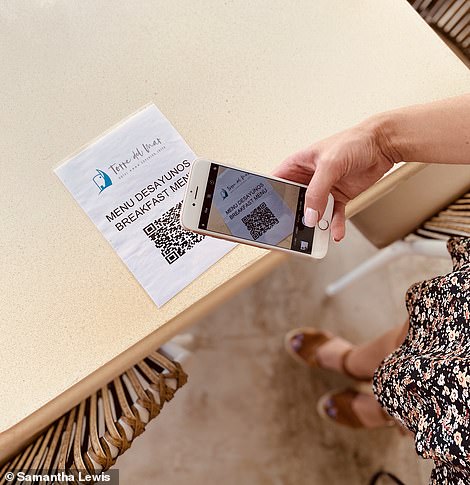 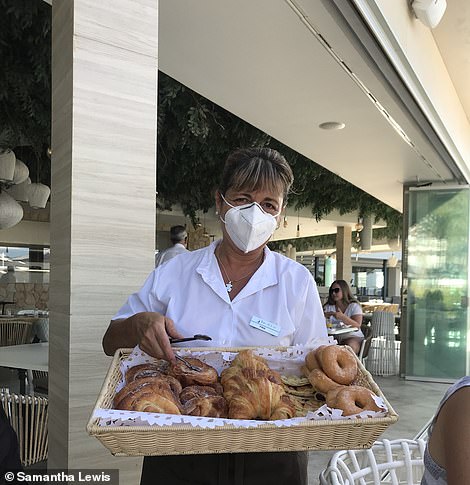 There were slot times for breakfast at Hotel Torre del Mar and the menu was accessed via a QR code (left). Pictured right is the breakfast basket of pastries 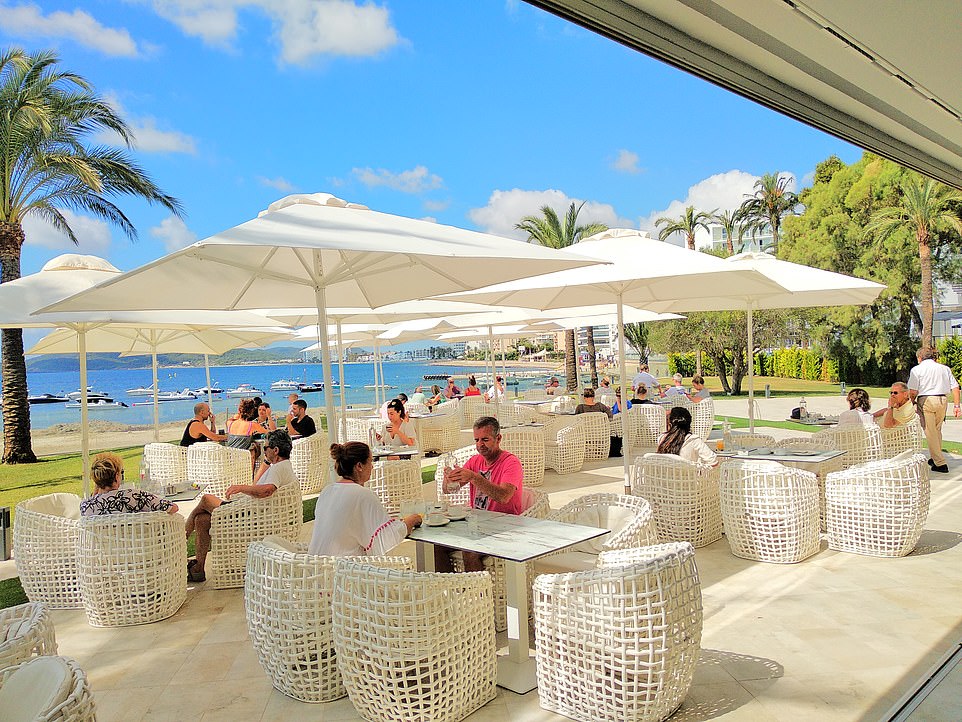 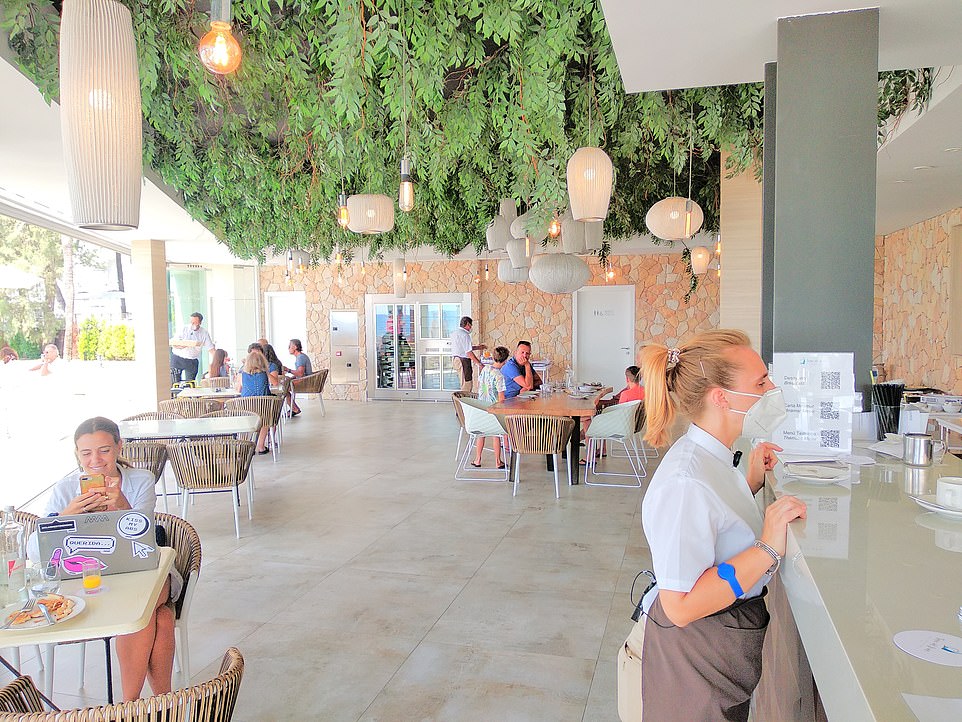 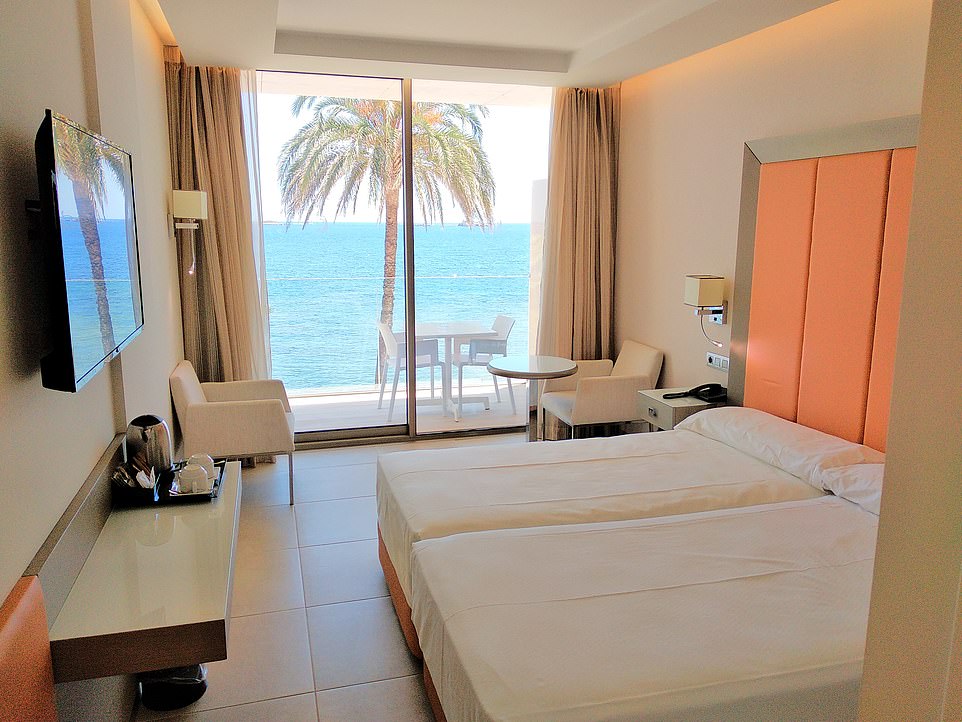 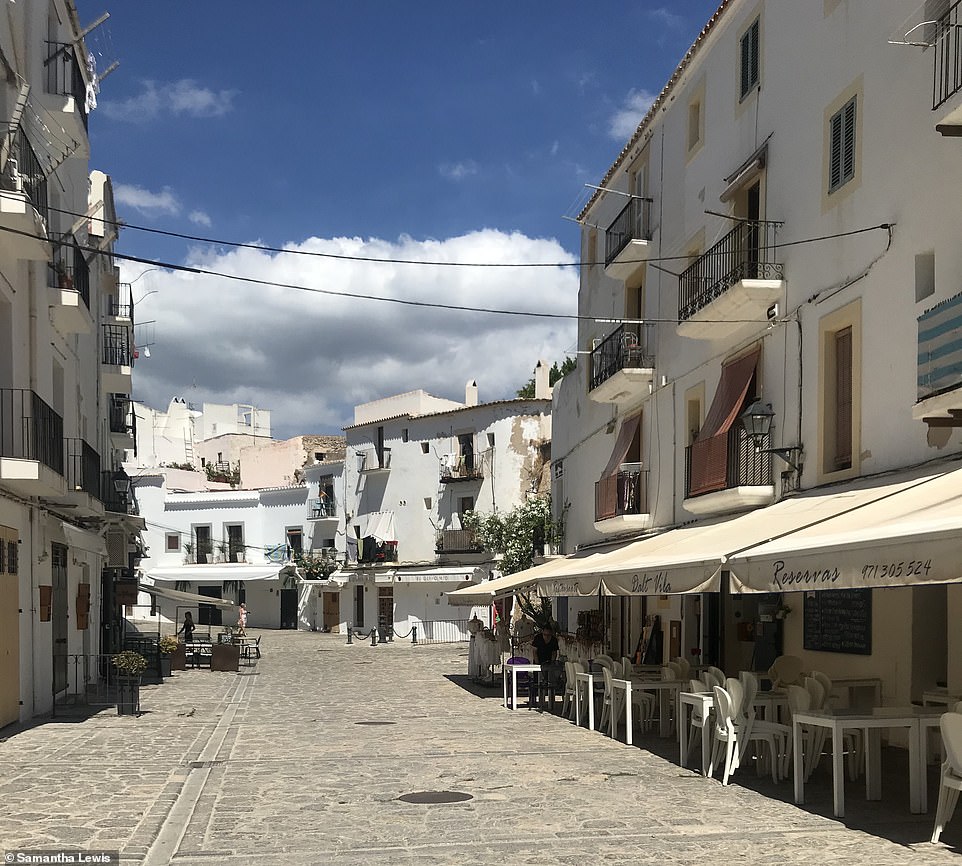 Samantha wandered around Ibiza Old Town (this image was taken by her during the stroll) and enjoyed a coffee at Croissant Show, known for providing revellers with post-clubbing sustenance. Sam writes: ‘I didn’t spot any bleary-eyed customers, but the coffee was superb’ 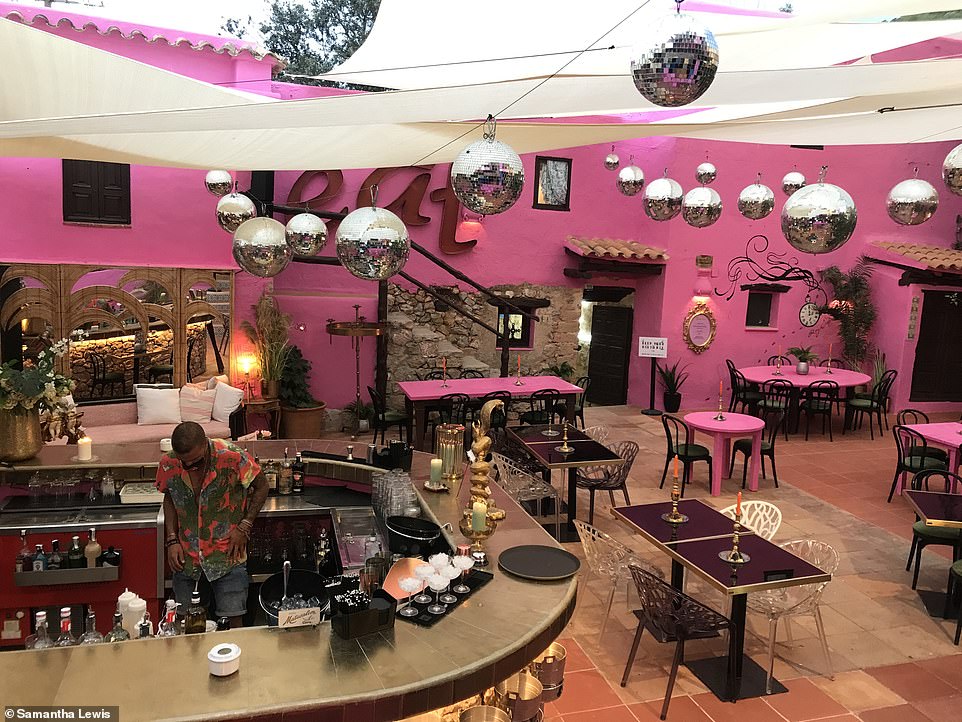 Samantha dined at legendary party hotel Pikes, pictured. And ‘got the best seat in the house at the new Pamelas restaurant’

BA CityFlyer operates two services per day from London City Airport to Ibiza (www.ba.com). Tickets cost around £145 (based on an economy fare between Aug 4-7). For information about how London City Airport is prioritising passenger safety, click here. Rooms at Hotel Torre del Mar start at around £198 per night.

Other marked changes included booking slot times for breakfast and no soft furnishings in the room, but otherwise, it felt reassuringly normal.

Later that night we dined at legendary party hotel Pikes in the San Antonio hills. You’d normally struggle to get a table here, but we had the best seat in the house at the new Pamelas restaurant.

The next day we wandered around Ibiza Old Town and enjoyed a coffee at Croissant Show, another infamous spot. The French-style cafe is usually open all hours and known for providing revellers with post-clubbing sustenance. I didn’t spot any bleary-eyed customers, but the coffee was superb.

My overall verdict? Ibiza felt a little soulless. However, it’s a perfect time to visit for a slower and more peaceful experience on the island if you feel comfortable to travel.

Pikes describes itself as an ‘iconic institution, steeped in rock ‘n’ roll history and brimming with personality’. George Michael, Grace Jones and Freddie Mercury are just a handful of the famous faces that have given the A-list haunt custom

a, experien, Ibiza, peaceful, Want
You may also like:

Railway holidays that explore the UK's most beautiful destinations, including Cornwall, Wales & Scotland from £189pp

The UK's most breathtaking peninsulas