Only THREE of the 40 police forces in England fined people for not wearing a mask over two-month period after they were made mandatory on public transport, in shops and indoor venues

Only three police forces in England fined people for not wearing face coverings in indoor public places during the coronavirus pandemic, a study found today.

British Transport Police are the leading force in issuing fines, having given out 51 fines after stopping 50,729 people between June 30 and September 8.

BTP have made 3,545 ‘interventions’ with passengers on public transport who were not wearing coverings approached by officers and asked to leave.

Face coverings were made compulsory in England on public transport on June 15, in shops on July 24 and a series of indoor locations on August 8. 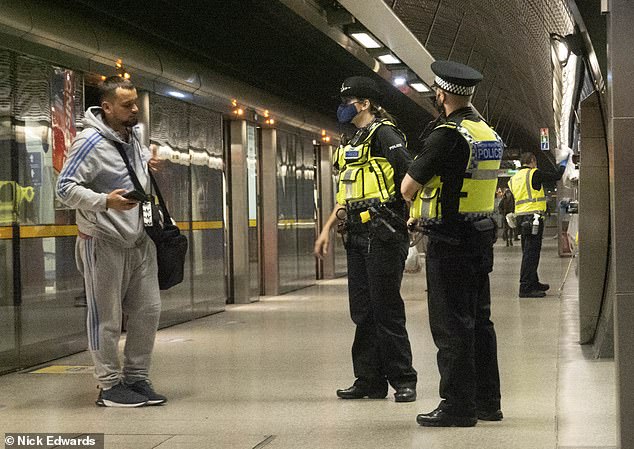 The only other two forces enforcing fines against those breaking the rules have been Lancashire Constabulary with two and Lincolnshire Police with one.

With the fines standing at £100 for first offences, this means just £300 worth of fines have been issued by police forces excluding BTP, who patrol trains across Britain.

The findings came from a series of Freedom of Information requests sent to all 40 forces in England by London-based marketing agency Reboot Digital.

Separate figures issued by the National Police Chiefs Council last week suggested police have given out 61 fines for failing to wear a face covering on public transport, up from 38 up to the middle of August, while 28 were handed out for not using a mask in shops.

The greater number could be because six forces – including the Metropolitan Police and Greater Manchester Police – did not respond to Reboot’s survey. 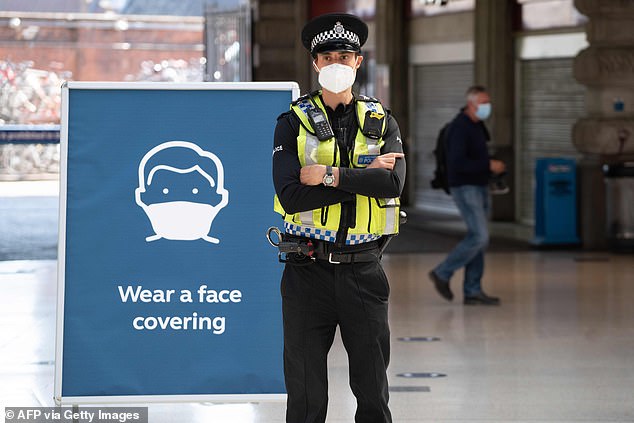 Last week Stanley Johnson, the father of Prime Minister Boris Johnson, apologised after being photographed in a shop in London without a face mask.

The police and Transport for London have enforcement powers including issuing fines of £200, reduced to £100 if paid within 14 days, for the first offence.

Repeat offenders will have their fines doubled at each offence – and after the first offence there is no discount, so the second fine is £400 and the third £800 up to a maximum of £6,400.

But there are exemptions for children under the age of 11, people with certain physical or mental disabilities, police officers and other emergency workers.

TfL has said its enforcement officers have stopped more than 100,000 customers from getting on its services until they put on face coverings.

The data was revealed after it emerged last week that half the fines handed out by police for breaking coronavirus rules have gone unpaid, with around 9,000 rebels set to clog up the courts.

Some 51 per cent of the 18,646 fines handed out by police in the crisis have been ignored, refused or contested.

Prosecutors are now preparing for an avalanche of cases due to go through magistrates courts for failure to pay, including many refusing because they are disputing the circumstances of the fine being handed out.

The figures came as police chiefs faced questions over the effectiveness of penalty notices after figures showed that a tiny number of people had been punished for flouting self-quarantine travel rules, despite thousands being referrred to officers.

Some 4,114 cases have been referred to police by health authorities, but only 38 people were fined for failing to self-isolate after arriving from a country on the UK Government Quarantine list.

Police were unable to trace hundreds suspected of breaking the rules.

In 440 cases, police took no enforcement action after no one was home when they called and another 240 travellers escaped a penalty after lying about their home address or it being incorrectly recorded.

Separate data from forces in England revealed just 15 fines were handed out to those flouting the ‘rule of six’ regulations in the first week.

Council chiefs have issued a closure notice to a beauty salon in Merseyside after a poster in its window denied the existence of Covid-19.

The poster at Skin Kerr in Bootle also said no face coverings were being worn on site despite rules requiring staff to wear surgical face masks and visors, and that ‘Covid talk is banned’.

Sefton Council said it has taken action to temporarily close the premises despite a number of visits from environmental health officers and a recent warning letter. 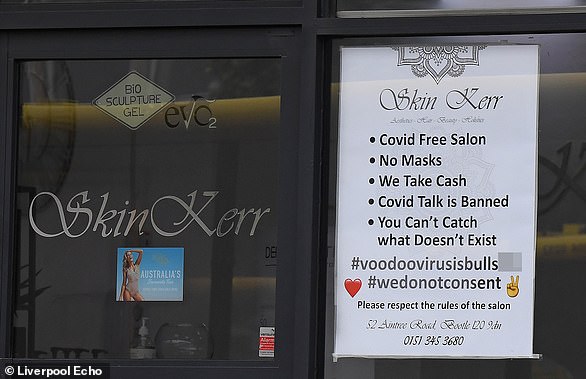 A poster at Skin Kerr in Bootle said no face coverings were being worn despite rules requiring staff to wear surgical face masks and visors, and that ‘Covid talk is banned’

Paulette Lappin, cabinet member for regulatory, compliance and corporate services, said: ‘It is the responsibility of businesses across Sefton to ensure they have the required measures in place to protect their staff and their customers from Covid-19 infection and we know that most of them are doing their utmost to comply.

‘And the council is working closely with the Health and Safety Executive to provide support and advice to our local businesses.

‘However, when businesses refuse to comply and insist on putting people at risk from the pandemic, we will not hesitate to take action against them as we have with Skin Kerr in Bootle.’