Istanbul/Beirut: The civilian death toll resulting from Turkey's offensive into northern Syria has risen to 30, the Syrian Observatory for Human Rights said on Saturday.

Also, a Kurdish police force in northern Syria says a car bomb exploded outside a prison where members of the Islamic State group are being held, but there was no word on casualties. 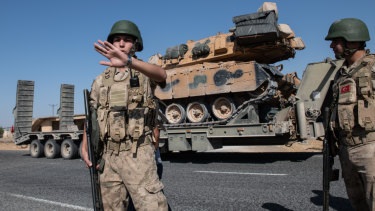 The police force said the blast occurred early Saturday outside the central prison in the north-eastern city of Hassakeh, much of which is controlled by Kurdish forces.

The Britain-based Syrian Observatory for Human Rights said after the blast, Kurdish fighters brought reinforcements to prevent prisoners from escaping.

No one claimed responsibility but IS sleeper cells have carried out such bombings.

Kurdish fighters are holding about 10,000 IS fighters including about 2000 foreigners.

There have been concerns that, as Kurdish fighters try to repel Turkey's invasion, some IS detainees might try to flee.

Thick plumes of smoke rose around the border town of  Ras al Ain on Saturday as Turkish artillery pounded the area.

Intense gunfire also resounded from within the town while war planes could be heard flying overhead.

The Kurdish-led Syrian Democratic Forces (SDF) denied that Turkish-backed forces had taken control of the town centre on Saturday after a senior Turkish security official said it had been seized.

"The [Syrian rebel] national army took control of the town centre this morning," the Turkish official said. "Inspections are being conducted in residential areas."

However, Marvan Qamishlo, an SDF military media official, said Turkish-backed forces had entered one neighbourhood of Ras al Ain, the industrial district, following hours of heavy Turkish shelling that had forced a "tactical retreat" from that area.

"Now the SDF's attack has started and there are very fierce clashes now," he said on Saturday. "The clashes are continuing in the industrial district," he added, saying this was the part of Ras al Ain closest to the Turkish border.

Last Sunday, US President Donald Trump cleared the way for Turkey's air and ground invasion after he announced his decision to pull American troops from their positions near the border, drawing swift bipartisan criticism that he was endangering regional stability and risking the lives of Syrian Kurdish allies who brought down IS in Syria.

Trump had said at the time that the estimated 1000 US troops were not in harm's way from the Turkish offensive.

There has been fierce international criticism of the assault and concern about its humanitarian consequences. The Syrian Kurdish-led administration said nearly 200,000 people have been displaced as a result of the offensive.

Turkish President Tayyip Erdogan dismissed the mounting criticism of the operation and said on Friday that Turkey "will not stop it, no matter what anyone says".

The US has ramped up its efforts to persuade Ankara to halt the offensive, saying Ankara was causing "great harm" to ties and could face sanctions.

It was quieter at Tel Abyad, the operation's other main target about 120 kilometres to the west, with only occasional shelling heard in the area.

The Turkish-backed Syrian rebels said earlier they had cut the road that connects Ras al Ain and Tel Abyad and had captured 18 villages since the operation began.

On Friday, the Pentagon said US troops came under artillery fire from Turkish emplacements though none of its soldiers were wounded near the Syrian border town of Kobani, 60 kilometres west of the main area of conflict.

Turkey's Defence Ministry said its forces did not open fire at the US base and took all precautions to prevent any harm to it while it was responding to fire from a nearby area by the Kurdish YPG militia, which Ankara regards as a terrorist group.