50-metre superyacht pieced together at Dutch dock sold for £28MILLION

A luxurious 50-metre superyacht that would easily blend in with the plush vessels floating in Monaco’s marina has been painstakingly fitted together in the Netherlands.

Incredible pictures show the steel hull of YN 18850, ‘Project Triton’, being lifted by crane onto the aluminium superstructure of the vessel at the Heesen Yachts facility in Oss.

The yacht’s sleek, curvy design is inspired by the flowing lines of classic cars.

The vessel offers four large bedroom suites and one master stateroom on the main deck, and can easily accommodate up to ten guests.

But they will have to wait for more than year to stay on the superyacht, which is on the market for £28 million, as it is not expected to be completed until February 2020.

Heesen said: ‘Her… bulbous bow ensures smooth and comfortable sailing even in rough sea conditions. Triton is built according to the highest Dutch quality standards.’ 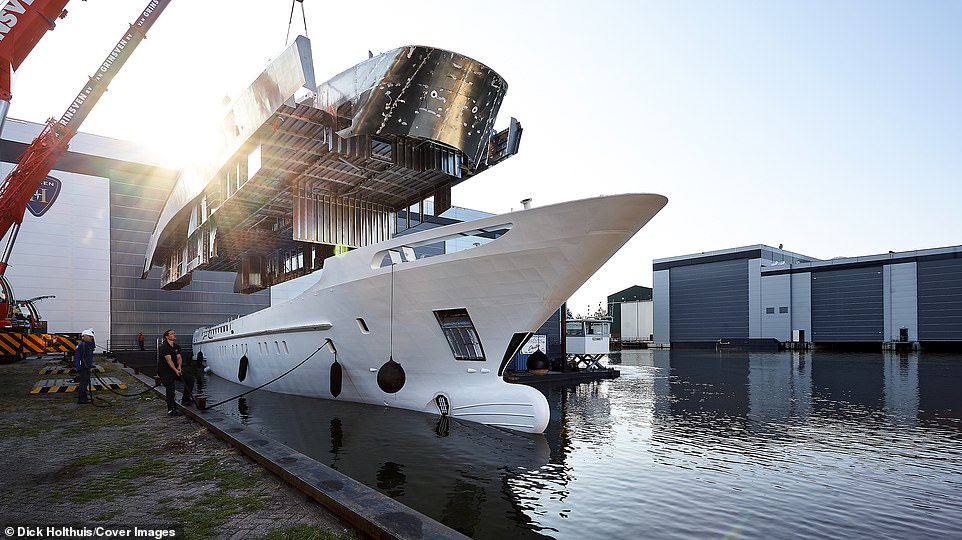 A view of the joining together of Project Triton’s steel hull and aluminium superstructure at the Heesen Yachts facility  in Oss, Netherlands 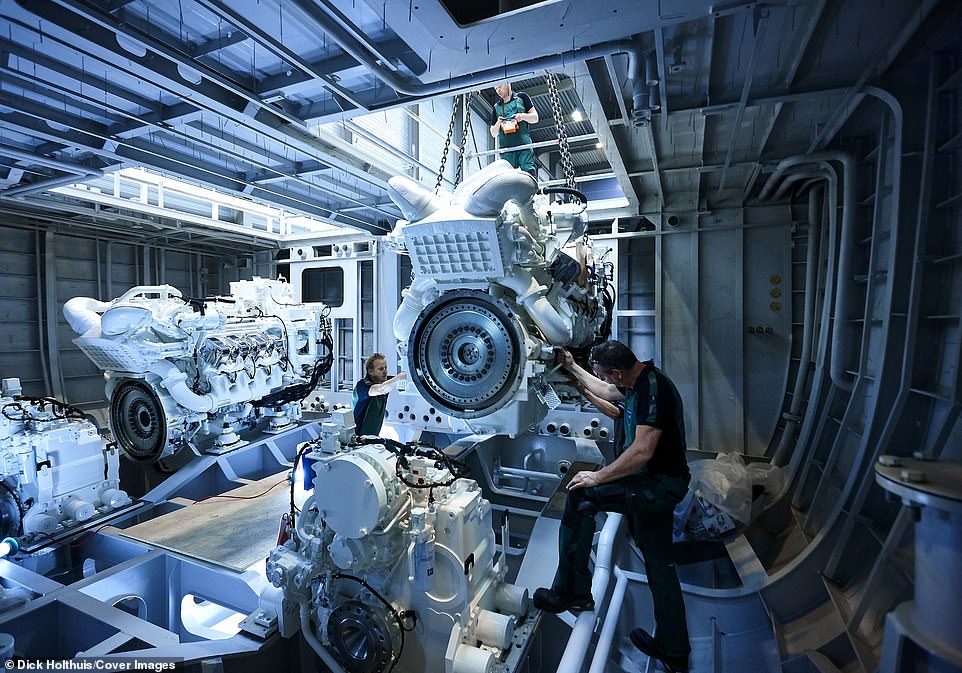 Inside the superyacht, Heesen staff continue putting together the pieces of the vessel, which will be ready for delivery by February 2020 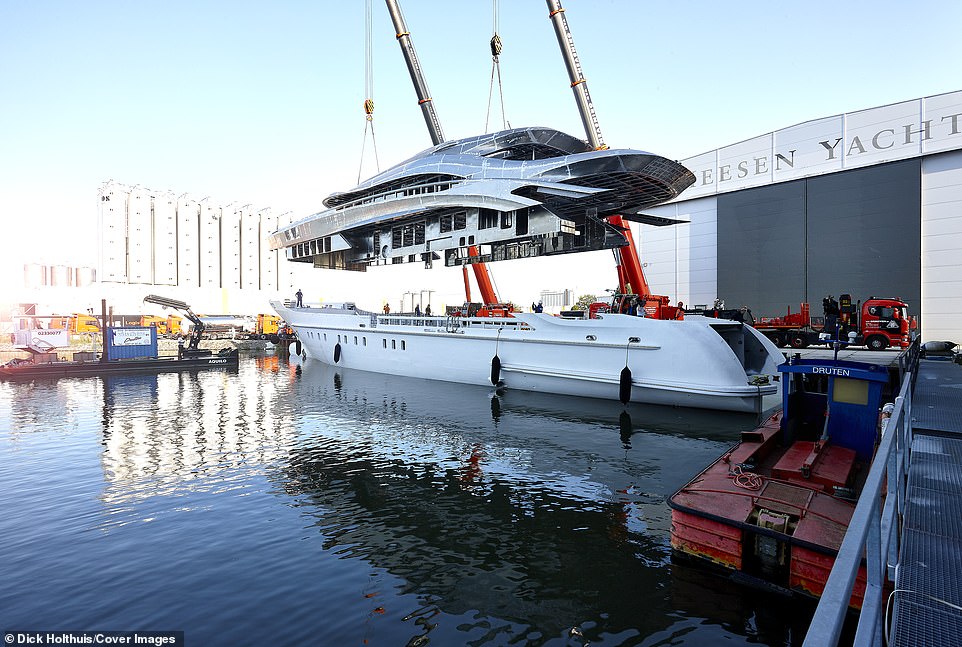 This incredible photo shows the superyacht being pieced together in Oss: the steel hull of YN 18850, ‘Project Triton’, is being lifted by crane onto the aluminium superstructure of the vessel 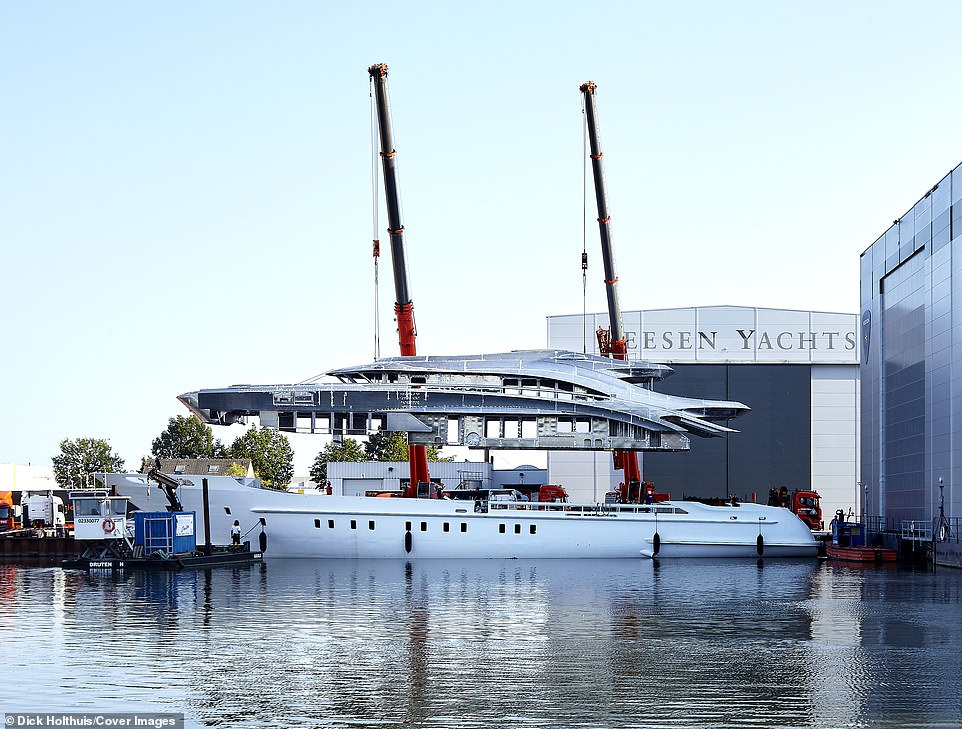 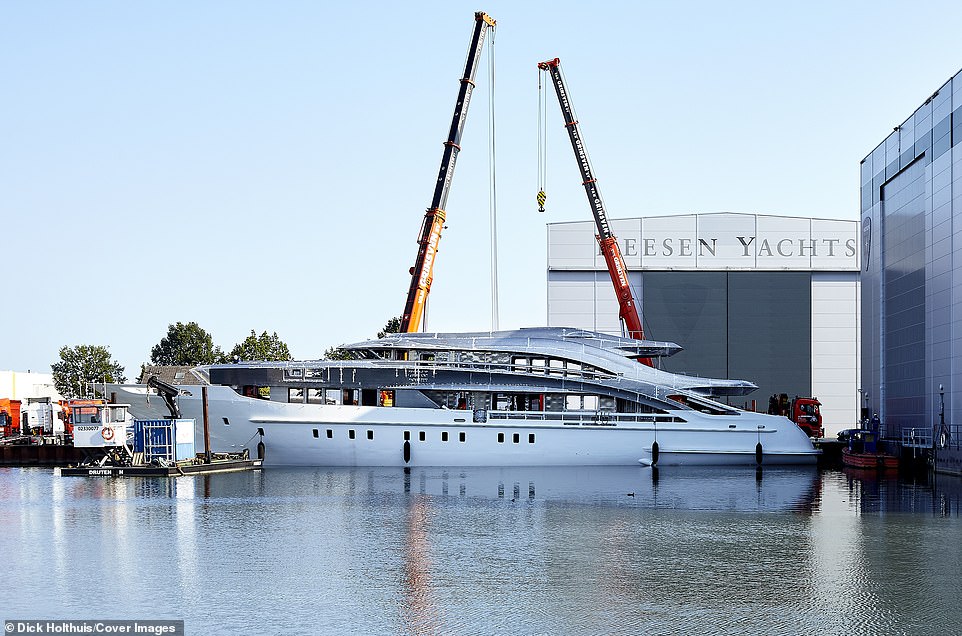 The above photo shows the moment the main components of the Dutch superyacht are joined together, using cranes to slot the pieces in place on the water 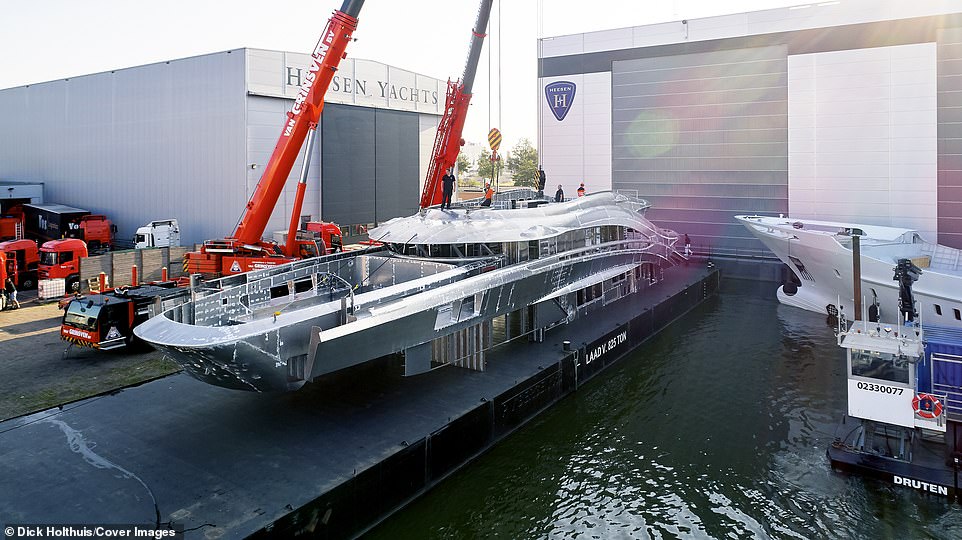 Project Triton is the second in the firm’s new 50-metre steel class, sporting exterior lines by Clifford Denn and an interior design by Reymond Langton 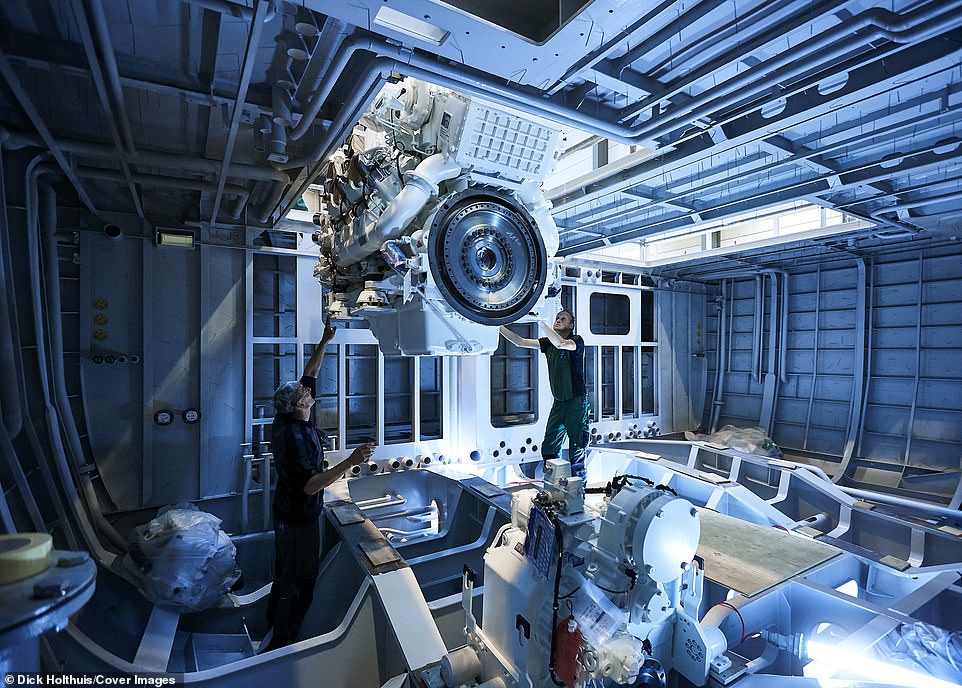 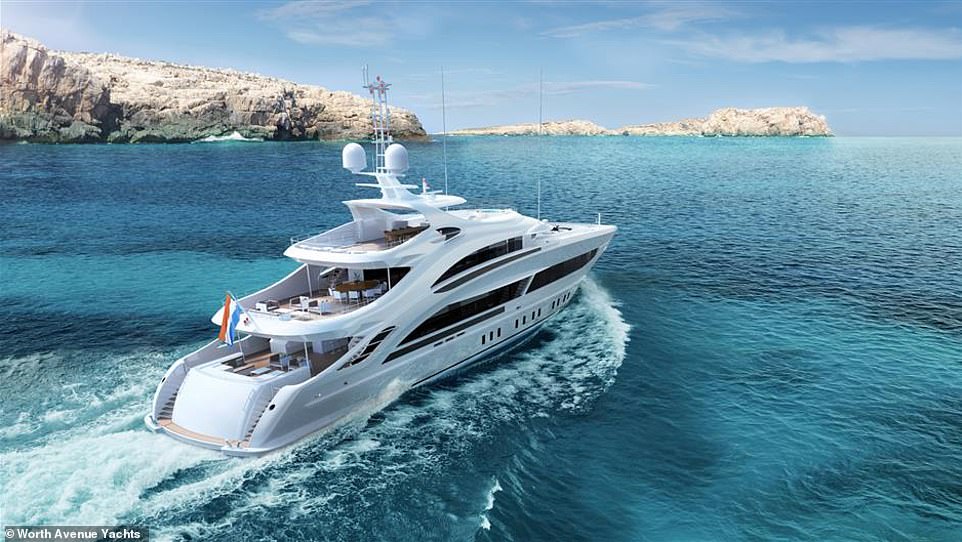 This is how the finished superyacht will look once completed in the Netherlands. The luxurious yacht features plenty of sleek lines, and its curves were inspired by those seen on classic cars 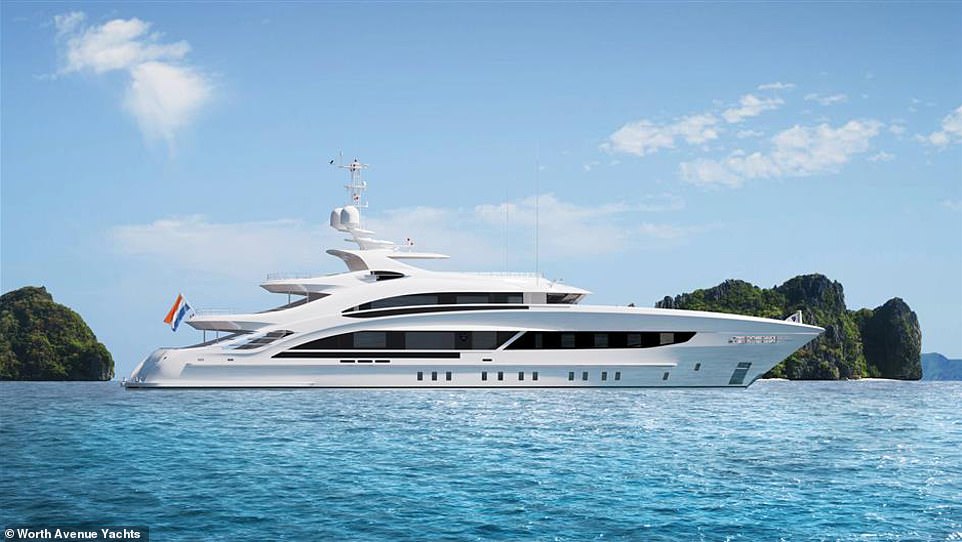 It has plenty of entertaining space both indoors and on deck, as there’s accommodation for 10 guests in four large suites and one master stateroom on the main deck forward 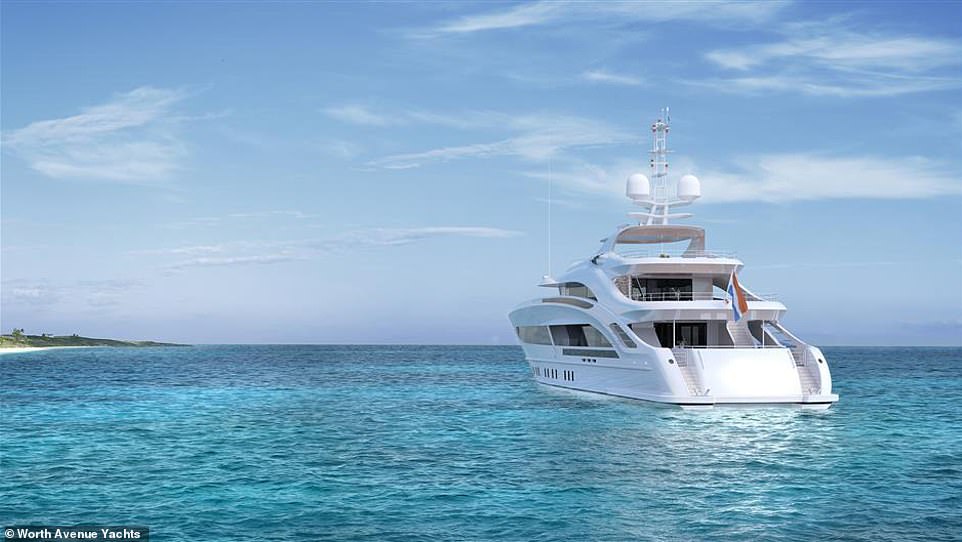 The superyacht is on the market for £28 million, and will be ready to take to the ocean in just over a year 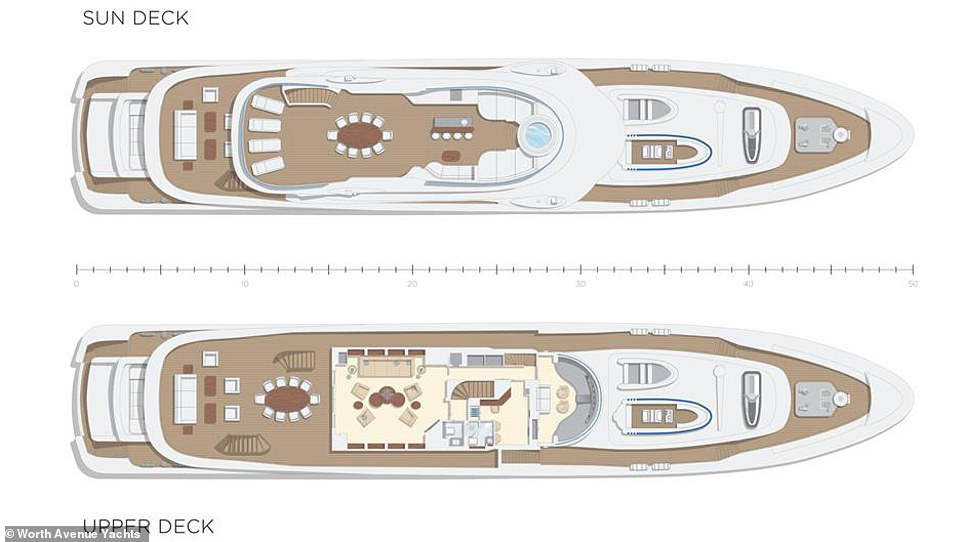