65% of staff said they travelled to work last week

Defiant workers return to the office: 65% of staff said they travelled to work last week despite PM’s WFH ‘if possible’ message – the highest number in seven months

Nearly two-thirds of working adults travelled to their workplace in Britain last week – the highest proportion since the coronavirus lockdown began – in a clear sign that firms are ignoring official advice to work from home.

Some 65 per cent of employees said they commuted between October 7 and 11, either exclusively or combined with home working, despite the Government urging people to work from home if possible on September 22.

The figure is up from 62 per cent the previous week and is the highest percentage since the data began being recorded by the Office for National Statistics when national lockdown restrictions started easing in late May.

There was also a decrease in the proportion of people who are not in work for reasons such as temporary closure of their business or workplace, being on annual leave, or being unable to work because of caring responsibilities. 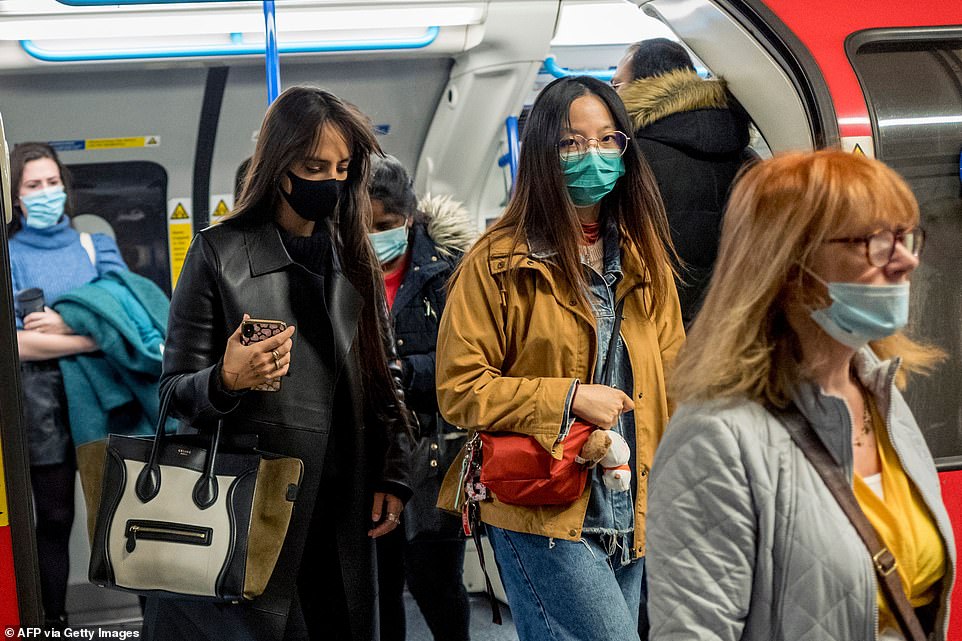 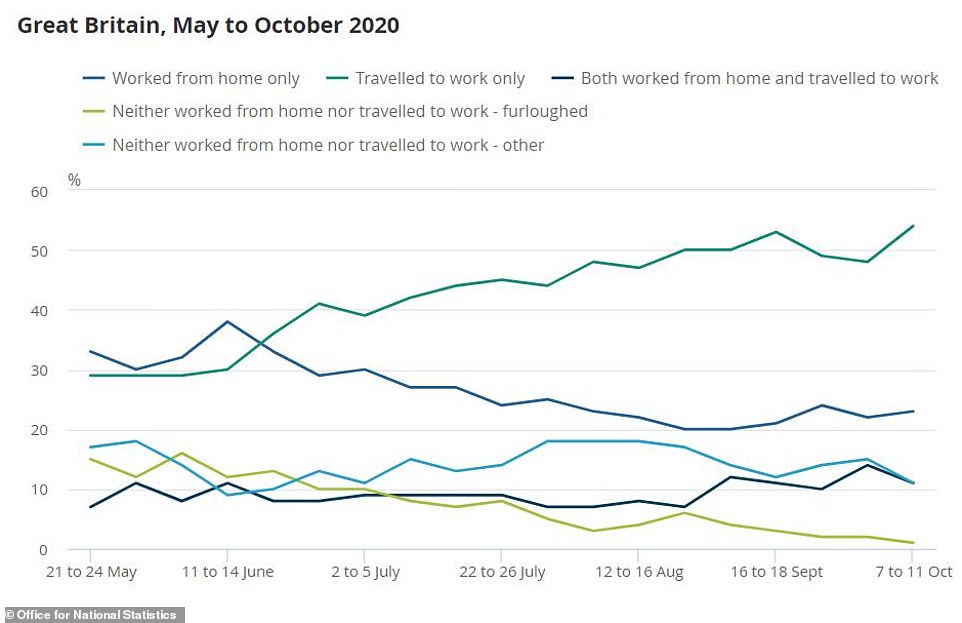 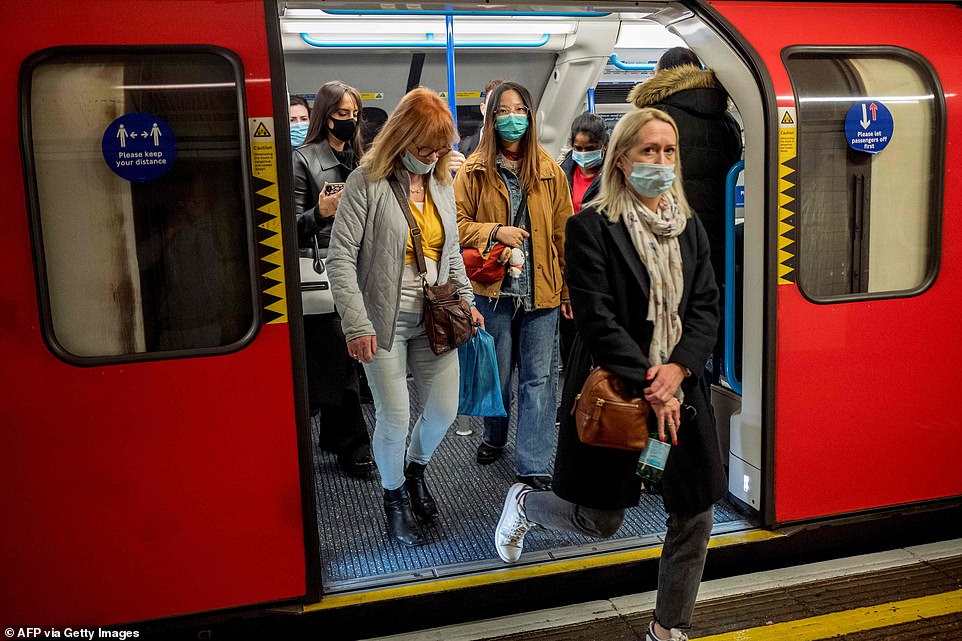 The percentage of people not in work because they had been furloughed was down to 12 per cent, falling from 17 per cent the previous week. The proportion who worked exclusively at home remained stable at 23 per cent.

Ministers are under mounting pressure to drop demands for an expansion of London’s congestion zone as a condition for bailing out cash-strapped TfL.

Sadiq Khan is locked in urgent talks with the Government to secure a £1billion funding package before TfL burns through the last of its reserves, threatening to grind transport in the capital to a halt as early as this weekend.

It is understood negotiations have stalled because of ministers’ insistence that any such cash injection depends on the Mayor extending the congestion zone to the North and South circulars.

Mr Khan is refusing to sign up to such an agreement, which would see up to three million citizens of Greater London forced to pay £15 to use their cars.

He believes such action would inflict further pain on Londoners, who were yesterday dealt the news they would be slapped with new Tier 2 Covid-19 restrictions from midnight tonight.

The proposed extension to the congestion charge zone has come under fire from both sides of the political divide, with Conservative mayoral candidate Shaun Bailey branding it a ‘death knell’ for businesses.

Meanwhile some 49 per cent of working adults said the pandemic was ‘affecting their work’.

The ONS analysed responses from 1,663 adults in Great Britain to its Opinions and Lifestyle Survey, examining the social impact of coronavirus.

It also found the proportion of adults worried about Covid-19 remains at its highest level since April.

Around three-quarters (74 per cent) of adults said they were very or somewhat worried about the effect of Covid-19 on their life right now.

Some 76 per cent of those who reported living in local lockdown areas said the same.

The study noted that a slightly lower percentage of people in lockdown areas reported socially distancing always or often (77 per cent), compared with those not living in areas subject to restrictions (83 per cent).

But it said this was not a statistically significant difference, adding that it will continue to monitor differences between areas with varying restrictions.

TomTom data also suggests that traffic congestion in London is going up, with levels during the evening rush hour at 5pm yesterday at 64 per cent compared to 48 per cent the previous week.

Wednesday’s figure for the same time was 55 per cent, compared to 50 per cent the previous week; while Tuesday was at 58 per cent, up from 50 per cent.

Meanwhile Transport for London data revealed there were more journeys made on the Tube last week than at any point since lockdown began.

Figures showed there were 1.56million journeys made last Friday, beating the previous high of 1.52million set on September 18 – before Mr Johnson’s announcement encouraging people to work from home if possible.

However it was also predicted today that offices will start to empty again amid fresh lockdowns caused by the ongoing virus crisis.

It comes after retail giant Amazon told staff to continue working from home into 2021, leading a wave of employers who are delaying a return to the office amid soaring coronavirus cases.

The company previously announced plans to allow workers worldwide to stay at home if they could do their job ‘effectively’ until early January. 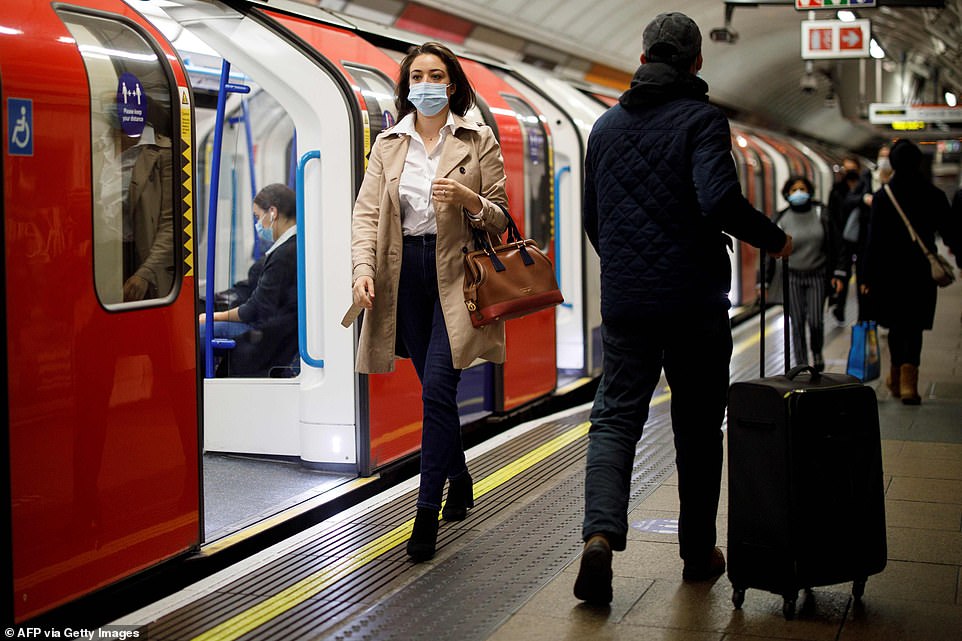 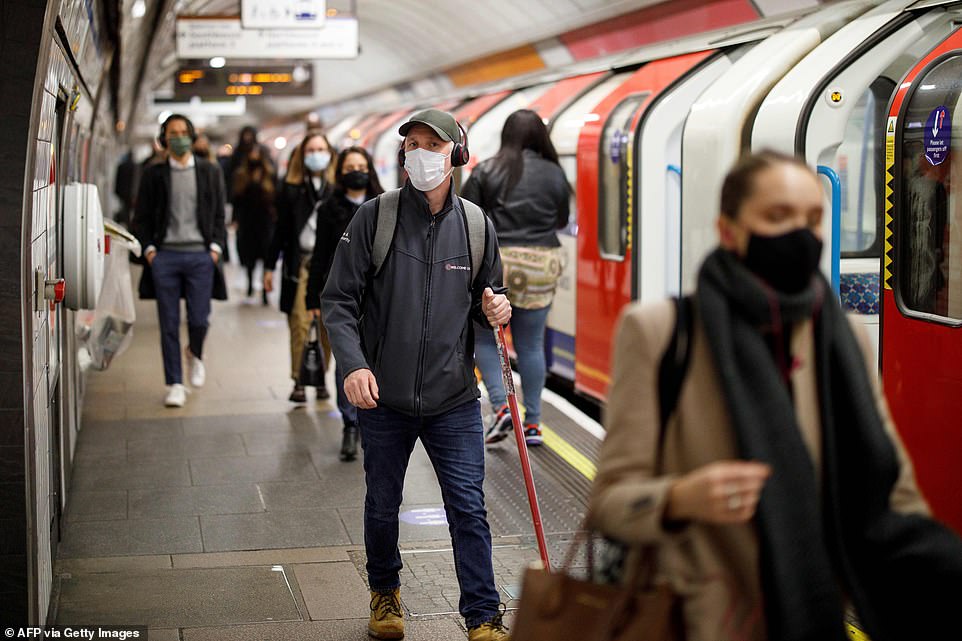 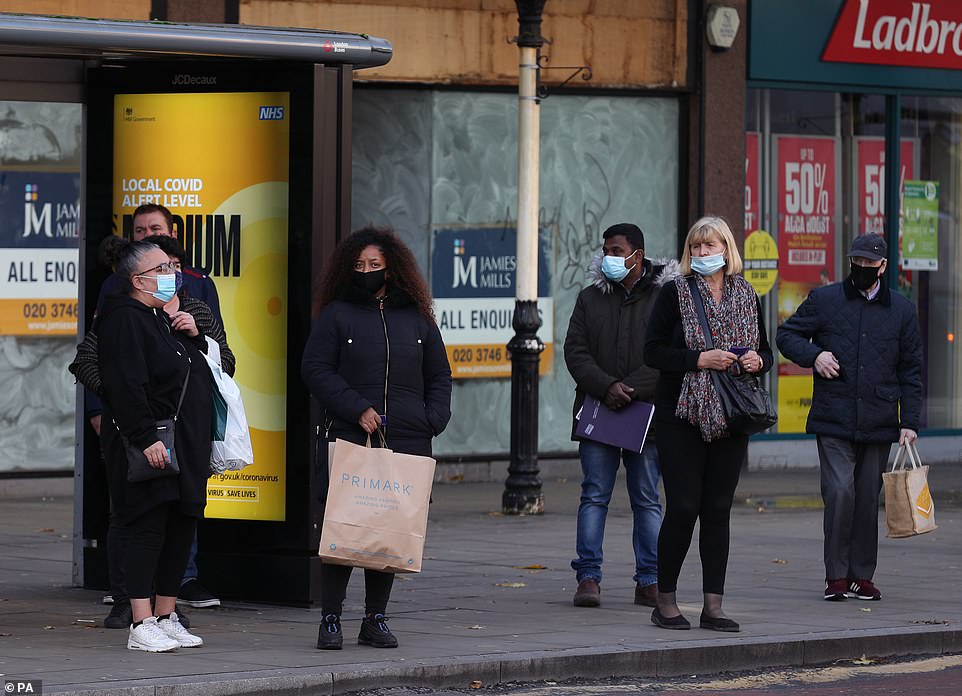 Passengers wait for at a bus in Ealing, West London, this morning as commuters continue to go into the office

But after the government announced plans to put London into Tier Two lockdown restrictions from tomorrow to clamp down on virus cases, they pushed back the expected return date for UK employees to March.

Amazon’s giant British headquarters in London’s Principal Place, which can hold up to 5,000 staff members, have been largely empty since the first lockdown in March this year.

Firms are concerned about setting definitive dates for a return to the office.

More than half of accounting firm KPMG’s 17,000-strong workforce who would usually work at a clients’ office or a company workplace had joined other staff who were already working from home.

The company is believed to have reopened their offices with Covid-19 secure measures, but only staff who ‘need’ to come in are doing so. KPMG have also devised their own app for staff to complete a risk assessment on before they return. 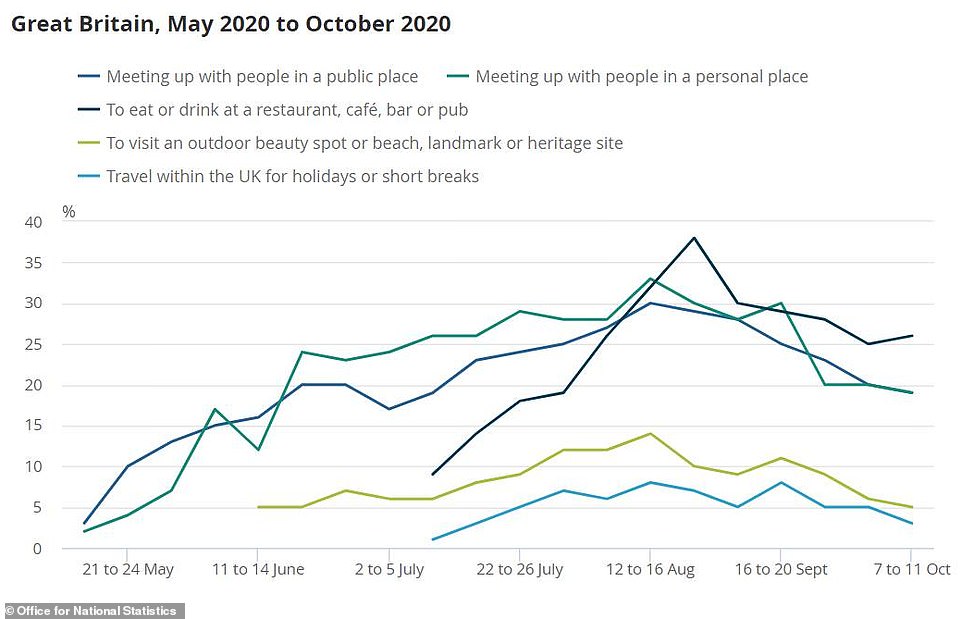 Levels of socialising, visiting an outdoor beauty spot, and travel within the UK have continued to decrease this week after increasing through the summer, according to the Office for National Statistics 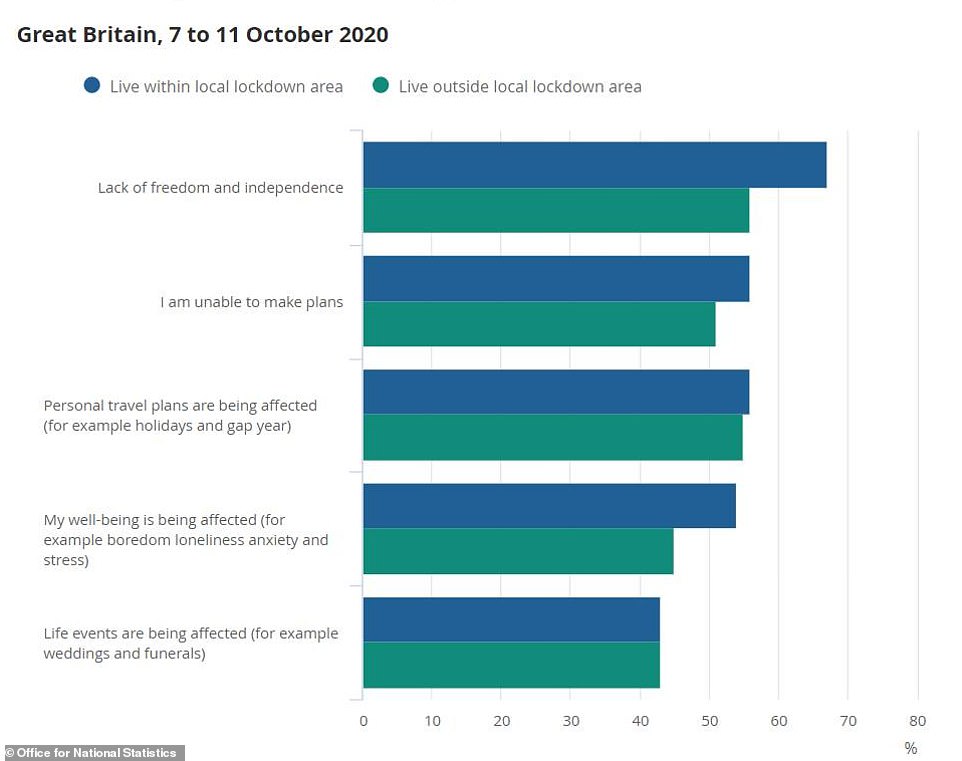 Banking firm Standard Chartered’s London-based headquarters meanwhile is believed to remain mostly empty, with less than one in six staff returning so far.

A source said the company had recently told workers to only come in to their Moorgate headquarters if ‘you are unable to work from home’, meaning occupancy could be ‘as low as 10 per cent’.

It is not clear whether the new government restrictions would change the company’s position, but the source added Standard would comply with any instructions.

But Jon Dweck, chief executive of office timeshare company Space Three Two, said offices will start to empty again amid fresh lockdowns – and firms will have to find new ways of operating to cope with a return to huge numbers of people working from home.

He said businesses are ‘rightly concerned’ about going into another national lockdown.

This data shows the breakdown of London Underground usage by the type of station, with seven different categories above

Traffic congestion data in London provided by TomTom is pictured above. Congestion levels are rising in the evening rush hour – yesterday’s at 5pm was 64 per cent compared to 48 per cent the previous week 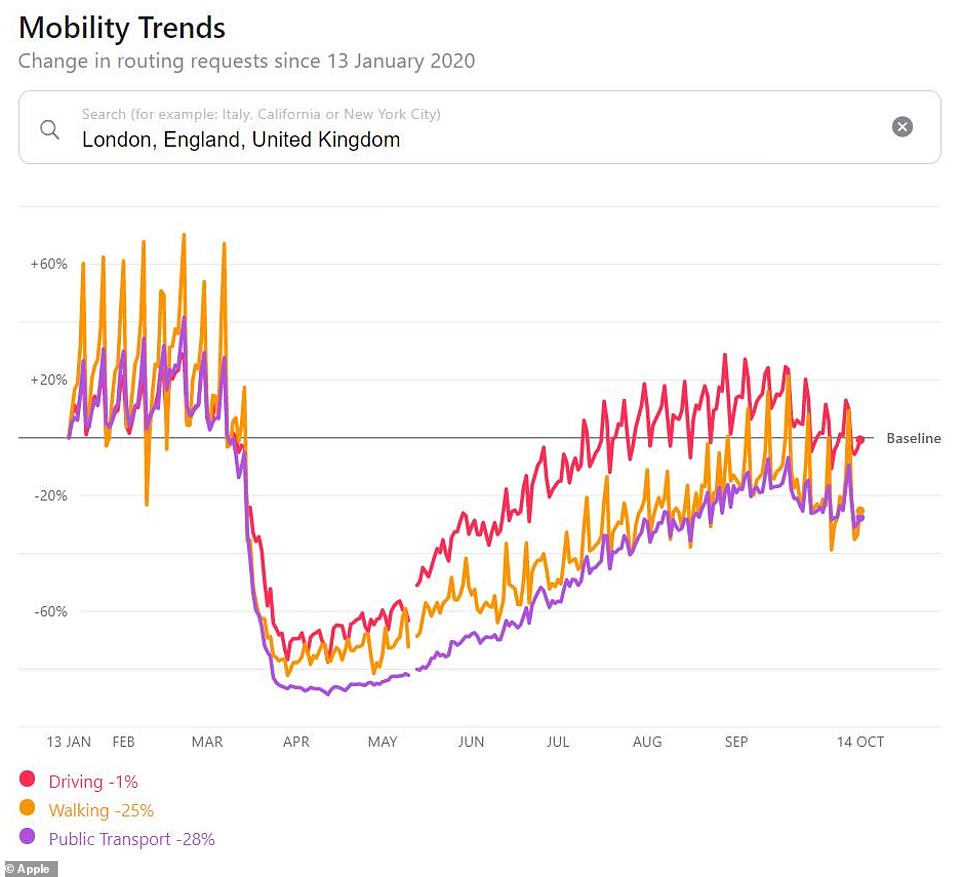 This Apple mobility data map shows how requests for driving (red), public transport (purple) and walking (orange) have changed over the past ten months, based on a baseline of mid-January, slightly falling back down again in recent weeks

Mr Dweck added: ‘While some landlords may offer reduced rent during Covid, empty offices are still an expensive challenge for business leaders.

‘Businesses were already struggling with rents due from the last lockdown and another lockdown could prove catastrophic.

‘We know that under-utilisation of office space is a pre-existing trend, which Covid is making worse. We are likely to see this issue persist long after the pandemic is behind us.’

Mr Dweck went on: ‘We’ve already seen mass redundancies and business closures across the UK and, while some people are still able to travel to work if they need to, it’s likely we’ll see offices start to empty out again with these new restrictions in place.

‘What we need is flexible office space – the ability for businesses to rent out their offices for two to three days a week to other firms who can no longer afford the lease on their office when it stands empty.’