Follow
Home » World News » A baseball hall of famer put $1 million worth of memorabilia up for auction to pay for his sons’ college tuition. His friend bought everything and donated it back to him.

A baseball hall of famer put $1 million worth of memorabilia up for auction to pay for his sons’ college tuition. His friend bought everything and donated it back to him. 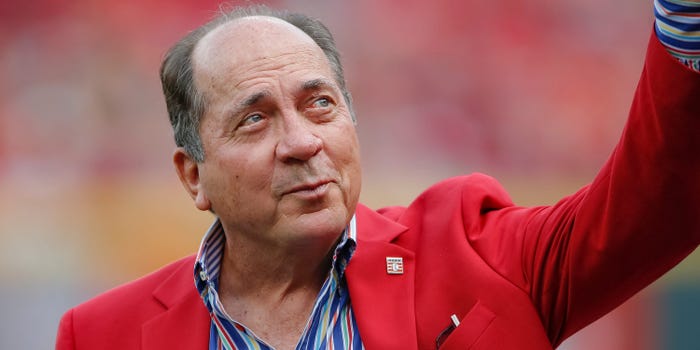 Major League Baseball Hall of Famer Johnny Bench auctioned off $1 million worth of memorabilia last month, and his friend surprised him by buying it all and donating it back to him.

Bench, who spent 16 years on the Cincinnati Reds between 1967 and 1983, told actionnetwork.com's Darren Rovell  that he held an auction on November 14 to raise funds to pay for his 14-year-old and 11-year-old sons' college tuitions.

The auction included his last home run bat, last Reds jersey, a 1968 Rookie of the Year award, and his Gold Glove awards.

Bench's friend Alan Horwitz secretly bought back all of the baseball player's items, placing unusually high bids so it wouldn't be bought up by collectors.

"There was no way I was going to let Johnny sell these to collectors," Horwitz told actionnetwork.com. "Seeing how hard he worked to be recognized the way he was after all these years. Only he deserves them."

It's unclear exactly how much Horwitz spent. He told actionnetwork.com that he spent well over $1 million, and Hunt Auctions told USA Today that bids at the auction totaled nearly $2 million.

Bench said he was brought to tears when the auction house told him what happened.

"I am truly stunned by Alan's generous gesture and am grateful and proud that these trophies and memorabilia pieces will be on display for millions of fans to experience," he told actionnetwork.com. "Alan's only request was to meet my boys, which will happen as soon as we can resume safe travel."

baseball, Baseball Hall of Fam
You may also like: