A bold voice is missing from Thailand’s new Parliament

Two things were missing as the ageing warriors of Thai politics gathered on Friday to inaugurate the new Parliament building with 500 new MPs, the first meeting since elections in March.

The first was consensus over who would govern the country, as the ruling junta continues to negotiate with minor parties to eek out a majority in the lower house. 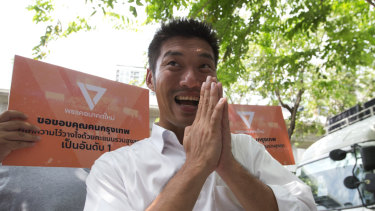 The second was the leader of the third-largest party and a bold new force promising generational change. He who had his status as an MP suspended by the Constitutional Court late on Thursday.

Future Forward Party leader Thanathorn Juangroongruangkit, a billionaire promising a break from the decades-old divisions and whose electoral success surprised pundits and party insiders alike, is facing lawsuits on multiple fronts as opponents including the ruling junta attempt to chip away at his legitimacy.

“While waiting for the verdict, I will continue to work for the people,” Thanathorn said on Twitter.

The Electoral Commission is investigating whether he broke the law by holding shares in a media company, or failed to divest them quickly enough when standing for office. He is also facing claims of sedition and breaching electoral laws for, among other things, pointing out biographical mistakes on a party website and that opposing parties were trying to poach candidates.

Thanathorn has decried the investigations as politically motivated, revenge for his anti-military stance and campaign promises of keeping the coup-prone army under civilian rule and out of power.

The tough tactics show Thanathorn has proven to be a genuine threat. The party has the backing of some of the country’s finest progressive legal minds. It secured the support of millions of young voters and even won over a few arch-conservatives who would not back the political machine of ousted former prime minister Thaksin Shinawatra.

The junta has pulled out all the stops to ensure it maintains power, starting years ago with a constitution that gives the military selection of the entire senate and effective veto power over who can be prime minister. Restrictive campaign laws, questionable electoral boundaries and a complicated preferential system designed to benefit smaller parties denied Thaksin’s forces a majority in the lower house.

One of Thaksin’s proxy parties was also disbanded before the election after King Maha Vajiralongkorn’s older sister offered to stand as its prime ministerial candidate – a move the king quickly kiboshed.

Fresh sedition charges were also laid during the week against one of the most prominent and persistent groups of anti-coup activists, with 13 appearing at a police station on Wednesday over a protest four years earlier. One of those charged won a seat under the Future Forward banner.

The prospect of a junta-led coalition is looking increasingly likely as two leaders of smaller parties have stood aside since the vote. They promised during the campaign they would not back the junta’s proxy party, but their successors are expected to agree to form government in return for a number of cabinet posts.

The opening of the new Parliament on Friday, presided over by the King, was meant to mark a return to democracy five years and two days since the coup.