Bangkok: Thai Prime Minister Prayuth Chan-Ocha plans to order an investigation to identify the people behind the student-led protests sweeping the country, even as he promised to resolve the tension peacefully.

Speaking at a media briefing after a cabinet meeting, Prayuth pleaded with protesters not to use demonstrations as a platform to stir unrest and said the government "is being very careful" not to inflame the situation. 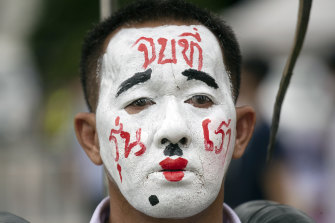 A pro-democracy demonstrator wears face paint that reads “End it with our generation” during a protest at Thammasat University in Pathum Thani, north of Bangkok.Credit:AP

"The majority of people don't agree with this," he said. "We have to look into the demonstrations and who's behind it because there's a lot of money involved. We have to investigate."

Citing the country's economic crisis, the coronavirus pandemic as well as inequality and income distribution, Prayuth said: "We're facing so many problems now, not just the one that has been raised by the protesters. Aren't these more important?"

Thousands of students expected to gather again over the weekend are calling for greater democracy and curbs to the power of King Maha Vajiralongkorn.

Protesters have warned that they will step up pressure on the government if it fails to meet their demands, which include dissolving the parliament, holding new elections and changing the constitution.

Some groups have also demanded the government rewrite the constitution by the end of September to disband the military-appointed Senate and change election laws to make them more democratic. 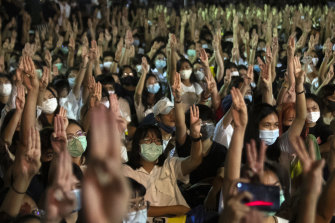 Students raise a three-finger salute, a resistance symbol borrowed from the “The Hunger Games,” during a protest at Thammasat University on Monday.Credit:AP

The government has already threatened to take legal action over posts made to social media platforms critical of the monarchy. Digital Economy Minister Buddhipongse Punnakanta on Tuesday ordered authorities to identify "inappropriate" posts and has already singled out 114 posts mostly made to Facebook, but also Twitter and YouTube, that may be in breach of the Computer Crimes Act.

"All evidence will be gathered and submitted to court tomorrow [Friday]," he wrote on Facebook. "Once the court has issued an order, it will be forwarded to the three platforms. If within 15 days, the accounts are not closed or posts deleted, we'll immediately take legal action."

According to the law, fines for violations are a maximum of 200,000 baht ($9030) and daily fine of no more than 5000 baht per post, he wrote. Thailand has strict lese majeste laws criminalising insults against top members of the royal family. Contraventions have resulted in lengthy jail sentences.

The announcement comes after thousands of demonstrators gathered on Monday as part of near-daily gatherings which have gained momentum after the arrests of top leaders, who have since been released on bail. They reiterated a rare public call last week by one of those arrested, Arnon Nampa, for rolling back measures that increased the power of Vajiralongkorn since he took the throne in 2016.

a, Involved, Lot, money, of, Tha
You may also like: