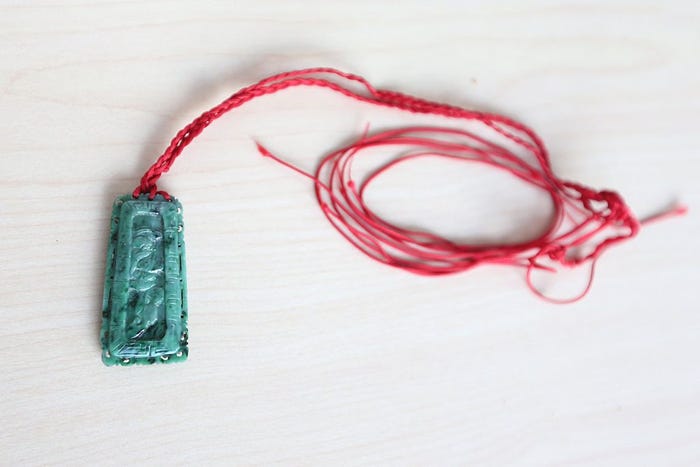 A study published in Science of the Total Environment that suggested COVID-19 is caused by a geomagnetic shift, and can therefore be warded off by jade amulets, has been removed from the journal.

The study, "Can Traditional Chinese Medicine provide insights into controlling the COVID-19 pandemic," has sparked outrage and criticism in the science community and prompted the University of Pittsburgh–based authors to request a retraction, The Scientist reported.

Scientists weighed in, saying the study misunderstands the concepts it covers and is riddled with errors.

"A paper like this gets out there, it's published in some supposedly peer-reviewed journal—it makes the rest of the field look stupid," Joe Kirschvink, a Caltech geobiologist whose research areas include sensing of magnetic fields by humans and other animals, told The Scientist. "And that's a harmful thing."

The study, which is no longer available online, explored the idea that the novel coronavirus isn't new, but rather a virus that has been hidden in DNA and was activated by a shift in the planet's geomagnetic field.

The paper claimed that jade, with it's own geomagnetic properties, can prevent the virus from making you sick, according to The Scientist and The Daily Beast.

The paper's primary author, Moses Bility, is an assistant professor of infectious diseases and microbiology at the University of Pittsburgh.

Bility did not immediately return an email from Insider seeking comment.

The professor told The Daily Beast his theory is sound and blamed the wave of backlash on prejudice in the science community. Other scientists, though, think the publication of the study points to flaws in the peer-review process, The Daily Beast reported.

"I am not sure who peer-reviewed it, but this paper should not have passed," Elisabeth Bik, a microbiologist, told the outlet.

The theory behind the paper was sparked a year ago when some of Bility's lab rats became ill from a lung disease and had to be killed, The Scientific reported. He began to believe there was a connection between the illness in the rats and a vaping lung illness that had been detected in humans.

"My argument was that the iron oxide that's been deposited in these individuals' lungs [from vaping] is somehow interacting with the lithospheric magnetic field," Bility told The Scientist. "And that's triggering this process called magnetic catalysis, basically, it has to do with spin chemistry.

When more of Bility's rats died in February and March, he pointed to the spring equinox, which he associated with a change in the geomagnetic field. The timing also correlated with the rise in COVID-19 cases in the US, the The Scientist reported.

Bility and his co-authors suggested the virus that causes COVID-19 was reawakened due to that shift.

Kirschvink told The Scientist it is true that strong magnetic fields can influence chemical reactions, but that the long-wavelength anomalies in this study aren't close to what would be required to have such an effect.

"This results section is a salad of different ideas taken out of context," he told the outlet.

Also jarring is the idea that jade can stop COVID-19 symptoms, a theory Bility based on records of practices in ancient China during a period of similar geomagnetic conditions, The Scientist reported.

Jade is so weakly magnetized that it will have no effect, Kirschvink said.

Bility told The Daily Beast he expected there would be some pushback on his theory, but never thought it would be so controversial that some would be calling for him to be fired.

He has said the ridicule he faces is a mix of racism, as well as an attempt to keep scientists from thinking out of the box.

He also told the outlet his study is based on "possibilities" and not an absolute truth.

"Nowhere in that article did I say, 'Go buy jade,'" Bility told The Daily Beast.

Academics told The Daily Beast that publishing weak theories related to the pandemic can reinforce conspiracy theories that may lead to the public dodging actual science or safety measures.

But Bility has previously endorsed social distancing and other hygiene protocols. He said he doesn't wear jade because he doesn't know which one would work.

"Even if someone decided to wear jade, which millions already do, it does not preclude them from following public health measures, or taking vaccines when they become available," he told The Daily Beast. "Also, to the best of my knowledge, wearing jade, which humans have done for thousands of years, is not associated with any disease."