Follow
Home » World News » A San Francisco ex-cop is the first in the city’s history to face homicide charges after a fatal on-duty shooting, DA says 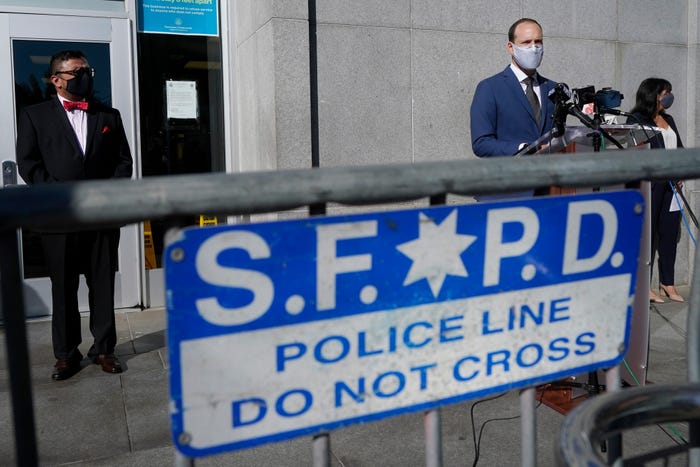 An ex-San Francisco cop is facing charges including manslaughter in connection to the fatal shooting of an unarmed Black man in 2017, according to the San Francisco District Attorney's Office.

On Monday, the city's district attorney's office announced charges against former officer Chris Samayoa—who was terminated from his job in 2018— for shooting unarmed 42-year-old Keita O'Neil, according to Fox News.  Samayoa is facing multiple charges including voluntary manslaughter, involuntary manslaughter, assault with a semiautomatic firearm, assault by a police officer, and discharge of a firearm with gross negligence.

"For too long, we have seen the failures of our legal system to hold police accountable for the violence committed against the members of the public they are entrusted to keep safe. In my administration, police officers are not above the law," District Attorney Chesa Boudin said in the news release on Monday.

Samayoa is set to turn himself in this week, according to the news release.

As the San Francisco Chronicle reported, Boudin is "committed to equal enforcement of the law" and his move is stamped as the first time in San Francisco an officer is charged with homicide.

"As far as we are aware, this is the first time in San Francisco history that an officer has been prosecuted for homicide,"  Boudin tweeted on Monday.

Samayoa was just days into his job as an officer when the incident occurred on Dec. 1, 2017, according to CBS San Francisco. According to the news station, Samayoa along with another officer chased O'Neil, who was accused of stealing a California lottery van, while responding to a report of a carjacking.

CBS SF reported that during the chase, Samayoa pulled out his firearm and shot O'Neil without warning as he was running past his vehicle. O'Neil was hit in his right collarbone and died from his injuries shortly after the shooting, according to the report.

ABC 7's Stephanie Sierra published a statement from the president of the San Francisco Police Officer Association, Tony Montoya. "We are committed to ensuring that Christopher and his family are supported during this difficult time and that he is accorded his due process rights and provided with a vigorous defense against these charges," the statement read.