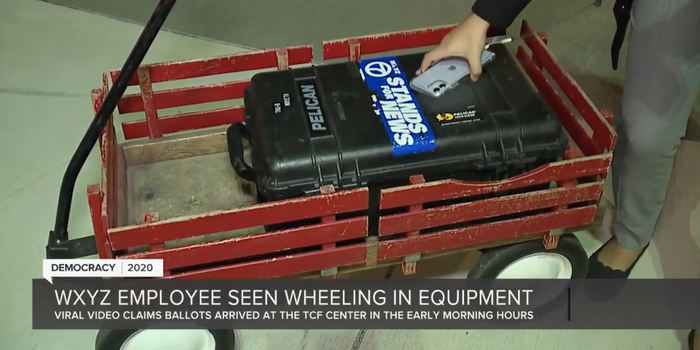 A video circulating online claiming to show an act of voter fraud in Detroit actually shows a local news station's photographer unloading his camera gear from a vehicle.

The video, taken by Texas lawyer and Lawyers for Trump member Kellye SoRelle, shows a man — now known to be a photographer from WXYZ — moving a box from a white van into a wagon.

Conservative news site Texas Scorecard and conservative YouTuber Steven Crowder shared the video on Wednesday, claiming it was "proof" of voter fraud and that the box contained ballots that were being brought into Detroit's TCF Center to be counted long after the polls closed.

SoRelle appeared on Crowder's livestream on Wednesday, where she said she was at the TCF Center as a Republican observer, and said the box looked similar to boxes of ballots she "had seen and been watching and monitoring" at polling stations.

WXYZ investigative reporter Ross Jones disputed the reports early Thursday morning, saying that the box in question was actually filled with camera gear for his team.

"The 'ballot thief' was my photographer. He was bringing down equipment for our 12-hour shift," he said on Twitter. "The video was shot by Kellye SoRell — a Texas attorney and member of 'Lawyers for Trump.' I'm hoping she's a better lawyer than she is a detective."

The photographer told WXYZ that he brought his wagon from home, and said it helped him bring his equipment down a floor at the TCF Center.

Texas Scorecard uploaded the video to its YouTube channel early Thursday morning and it has since had more than 137,000 views. The video is still up, despite its misleading content.