Tree-mendous! Aborist saws the top off an 80ft poplar – and the falling trunk plants itself back in the ground

A tree cutter accidentally began planting more trunks instead of chainsawing them down in a viral video posted on social media.

Footage shows the top third of an 80-foot popular impaling itself in the ground after it is separated from the main trunk near Terre Haute, Indiana.

Arborist Robert Haworth, 32, who removes unwanted and dead trees, was chopping it down on January 7. 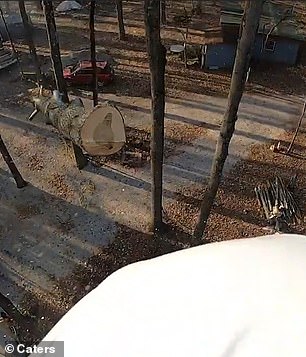 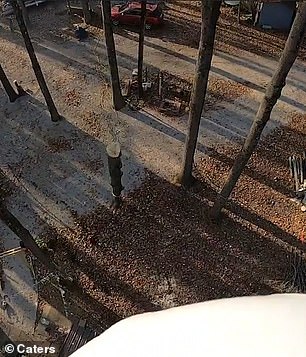 The falling top third of a poplar tree shocked an arborist when it impaled itself in the ground, leaving it standing bolt upright, in Terre Haute, Indiana

The 43-second clip shows Mr Haworth chainsawing through the trunk as he begins to dismantle the poplar.

As it falls the tree spears itself into the ground, leaving it standing bolt upright.

The scene would not be out of place in a thriller or action adventure movie such as Lord of the Rings.

The falling wood luckily missed the pathway and other machinery as it plummetted to the ground.

The land owner had reportedly decided to remove the poplars because they were growing against the side of cabins and causing problems. 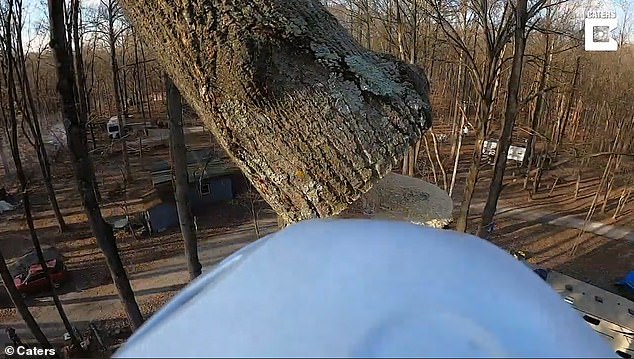 Robert Haworth, 32, had been cutting through the top of the 80-foot tree beforehand

Aborist, falling, pla, sees, Trunk
You may also like: