London: A woman who alleges she was forced to have sex with Prince Andrew when she was 17 and trafficked as a sex slave by the pedophile Jeffrey Epstein, says the Duke of York was lying when he used "ridiculous excuses" to deny their relationship.

Speaking to British television for the first time since the Duke's car-crash interview when he relied on alibis of not being able to sweat and eating at a Pizza Express in Woking instead of partying at a nightclub in London and later having sex, Virginia Roberts Giuffre contradicted the duke's claims by saying he sweated all over her and was a terrible dancer.

In the interview with BBC Newsnight, the Duke of York denied having slept with Giuffre, then named Virgina Roberts, in 2001. He also said he ended his friendship with Epstein, during a visit to his New York mansion which lasted several days, following the American's release from jail for soliciting prostitution from a minor. 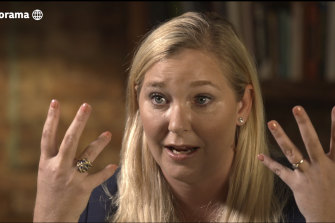 Virginia Roberts Giuffre has given her first UK television intervie with the BBC’s Panorama program.Credit:BBC Panorama

"He is the most hideous dancer I’ve ever seen in my life," Giuffre told the BBC's Panorama program. "I mean it was horrible and this guy was sweating all over me, like his sweat was like it was raining basically everywhere."

"I was just like grossed out from it but I knew I had to keep him happy because that's what Jeffrey and Ghislaine (Maxwell) expected from me."

Giuffre said their encounter at the Tramp nightclub, in a VIP section, was her first introduction to the Duke of York at the behest of Epstein and his then girlfriend Ghislaine Maxwell.

She claimed she later had sex with Prince Andrew at Maxwell's townhouse in the affluent London suburb of Belgravia.

"It was a really scary time in my life," Ms Giuffree (nee Roberts) told the BBC's Panorama program.

"He knows what happened, I know what happened and there's only one of us telling the truth and I know that's me," she said.

She claims she had encounters with the Duke of York in London, New York and in the Virgin Islands and that Epstein, who killed himself in jail while awaiting trial on sex-trafficking charges, flew her around the world on private jets to have sex with powerful men.

In the interview, broadcast on Monday night in Britain, Ms Roberts Giuffre also poured scorn on Prince Andrew's suggestion a photo of the pair had been faked, telling Panorama the picture was genuine and that she had handed the original to the FBI in 2011. 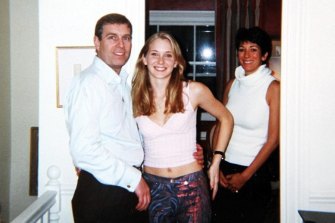 Michael Thomas, the freelance photographer who copied the original picture, revealed it was found amid a pile of photographs Ms Roberts Giuffre handed him that looked like they had "come from Boots".

An affidavit from a man Ms Roberts Giuffre was dating in 2001 reportedly confirms he saw the picture and that she told him she was forced to have sex with the Duke. Another photograph unearthed by Panorama shows the Duke with Epstein and Ghislaine Maxwell at Ascot the previous year.

Prince Andrew stepped down from his Royal duties following the Newsnight interview and has been abandoned by a string of charities of which he was patron, following his disastrous interview last month, which was met with disbelief across Britain.

Panorama revealed that lawyers for five of Epstein's victims want the Duke to provide testimony in their court cases. Pre-trial witness subpoenas have been prepared for all five cases and could be served on the Duke if he returns to the US.

The Duke said he would take legal advice but that if "push came to shove" he would testify.

Sarah Ransome, another of Epstein's alleged victims, told the BBC: "Ghislaine controlled the girls. She was like the madam. She was like the nuts and bolts of the sex trafficking operation and she would always visit Jeffrey on the island to make sure that the girls were doing what they were supposed to be doing.

Ms Maxwell's whereabouts is unknown, but she has previously denied any involvement or knowledge of Epstein's abuse.

Buckingham Palace said in a statement that the Duke had "consistently and emphatically denied any sexual contact or relationship with Virginia Roberts" and regrets his "ill-judged association" with Epstein.

with The Telegraph, London