This is the adorable moment a baby elephant performs for the crowds and appears to have a little dance in the middle of the road.

Showing off for the people who are watching, the baby stamps its feet and kicks its legs out. 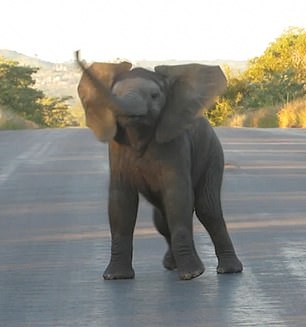 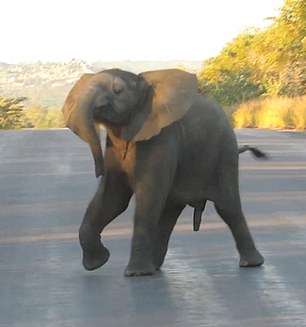 The infant’s ears flap about as it wiggles and shakes its body, nodding its head to show off in front of the people.

He holds his pose for a few seconds as the people filming laugh quietly so they don’t interrupt his display.

The elephant saunters over towards its mother, keeping a little bounce it his step, and crossing his front legs over each other theatrically.

Once his mother emerges from the grass, the baby keeps close to her right side as she comes on to the road.

In the video, the baby continues to bob about and lowers his front legs so his trunk touches the ground.

Unable to keep still, the animal walks backwards and forwards before heading towards the grass at the road side.

In the video, which was taken in June, 2019 and has recently resurfaced online, the pair are soon joined by another two elephants.

The person who took the video said: ‘While leading a wildlife safari in the world famous Kruger National Park, we had this incredible and comical sighting of this baby elephant dancing and playing on the road in front of us.’