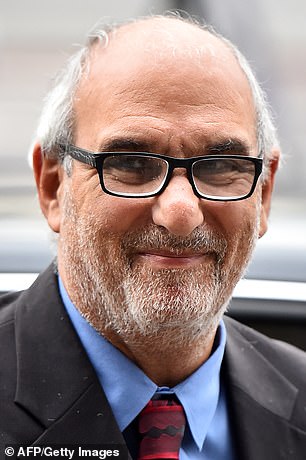 Alan Yentob has denied ‘blackmailing’ ministers into handing over millions in taxpayers’ cash to Kids Company shortly before the charity’s collapse.

The BBC’s former creative director was chairman of Kids Company from 2003 until it went under in 2015 days after being handed a £3million government grant.

Mr Yentob and seven other senior employees – including the charity’s founder Camila Batmanghelidjh – are battling accusations over their role in the financial meltdown in a High Court case.

The Official Receiver claims the board of trustees repeatedly failed to stop the charity’s collapse despite warnings about its perilous financial position.

Mr Yentob and the others could be banned from holding company directorships for six years if found to be at fault.

The charity, which ran centres helping troubled young people in south London and Bristol, received £42million of taxpayers’ money in its lifetime.

The High Court in London heard yesterday that by 2013 the trustees were asking the Government for more than the £4million a year the charity had previously been receiving.

Mr Yentob attended a meeting at 10 Downing Street the following year to ask for £12million.

The request was denied and Mr Yentob was told a £4.2million grant for the following financial year would be the last because ‘the prime minister could not be seen to be favouring Kids Company’.

Then prime minister David Cameron has previously been described as being ‘mesmerised’ by Miss Batmanghelidjh.

In an affidavit for the hearing, Mr Yentob admitted ‘high-level lobbying’, adding: ‘It is true that Kids Company would point out that if government funding was not forthcoming it might be necessary to close centres or close altogether.

Mr Yentob said: ‘These disqualification proceedings are a profound and unjust humiliation for the trustees who gave years of dedication and commitment to supporting the most vulnerable in society.’