Alfie Evans’ supporters have been confronting people who have set up 27 unofficial online fundraising pages in his name and warned people not to donate to them.

The official Alfie Evans JustGiving page has received almost £140,000 of donations since it was set up with the original aim of getting the toddler ‘a diagnosis and treatment’.

But since the death of the 23-month-old from Bootle, Merseyside, numerous other JustGiving and GoFundMe pages have appeared raising money for his funeral and family.

There are now at least 27 online sites raising cash for the family yet only the official site and a JustGiving page set up by Louise Wallace are considered approved by relatives.

Merseyside Police say they have not had any reports of fraud but Alfie’s supporters have warned against donating to any other group. 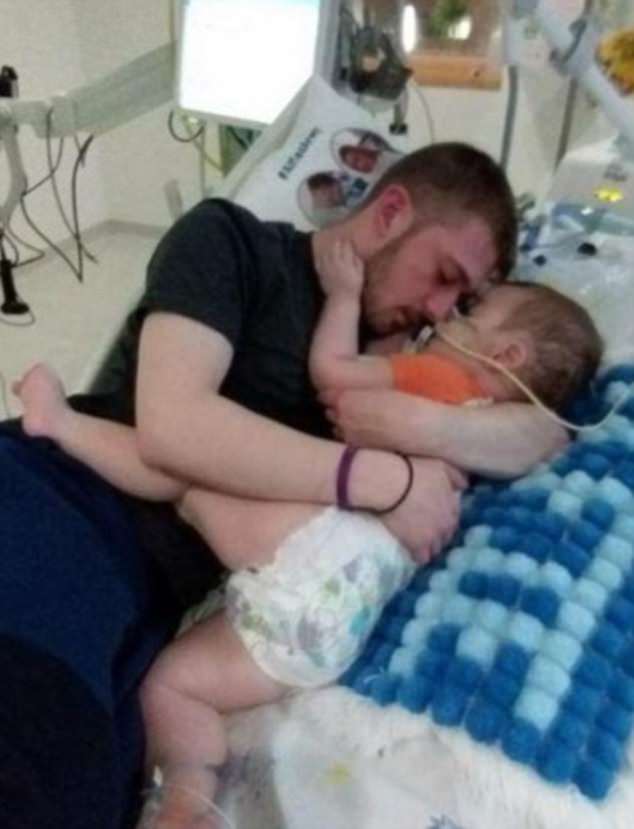 A number of unofficial fundraising pages have been set up for Alfie Evans, pictured with his father Tom, with some supporters warning others not to donate 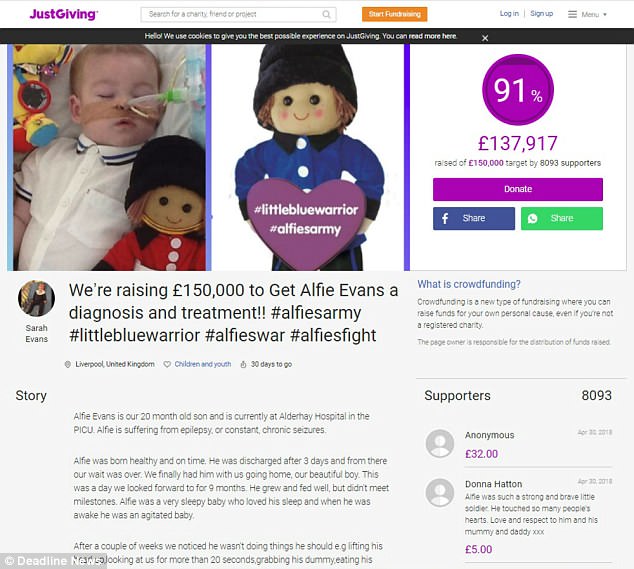 The official fundraising page for Alfie is at £140,000 and is likely to be used towards helping other children after his death on Saturday 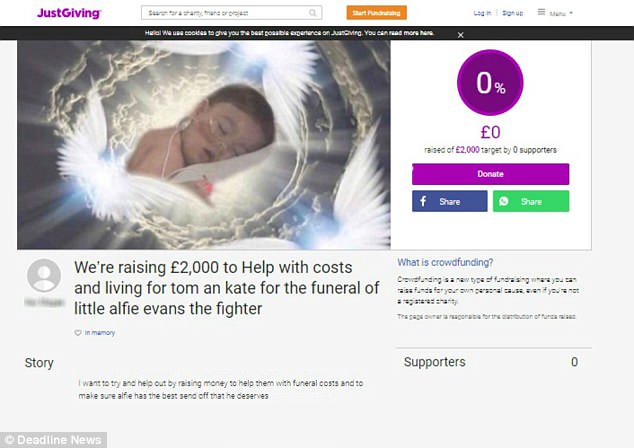 But others have set up new sites to raise money for his funeral for example, which some have called ‘disgusting scams’ – although police have not had any reports of fraud

Just Giving, which gets five per cent of any donations, pulls down around 100 pages every year because of fraud

Just Giving does allow anyone to set up crowdfunding pages but can pull them down and refund money to those who have donated if they receive complaints.

What happens if a crowdfunding page is a scam?

Just Giving relies on the public to report pages that may be raising money fraudulently.

In the first instance they advise people to contact the page owner directly with any concerns.

Every Page owner has an obligation to spend the funds they raise as promised.

If the Page owner fails to respond adequately, or at all, Just Giving can intervene and investigate of they are ‘misrepresenting their project’.

They will then go to the police if they suspect fraud.

Just Giving, which gets five per cent of any donations, pulls down around 100 pages every year because of this.

They will also go to police if they suspect fraud.

Moderators of the Alfie’s Army Official Facebook group, which Alfie’s parents Tom and Kate posted updates in, have slammed multiple pages asking why they have been set up without approval from the family.

Kayleigh Macey Hughes, a page moderator who is believed to be close to the family, posted on her own Facebook writing: ‘F****** disgusting people making their own JustGiving pages using Alfie’s name saying it’s for him when no-one has had any permission off family to do them. Who ever has made them have some respect and take them f****** down’.

A page, set up on Saturday, states: ‘We’re raising £2,000 to Help with  costs and living for Tom and Kate for the funeral of little Alfie Evans, the fighter.’

Kayleigh commented on this page yesterday, writing: ‘Hi can I ask why you are setting a JustGiving page up when you do not have permission to?

‘Please take it down, no family have given you permission. If you do not take it down the police will be called because this is fraud.’

The page is still up but has received no donations.

Another page, which was set up last week, before Alfie died, promised: ‘We*re raising £10,000 to get Alifie out of the hospital.’

Users have since commented on the page, which has so far ‘raised’ nothing.

Tiana Leigh wrote: ‘Do Not Donate This Is A SCAM !!!!’ Emma Thomas wrote: ‘This is sick.’ Jane Daly called it a ‘Disgrace’ 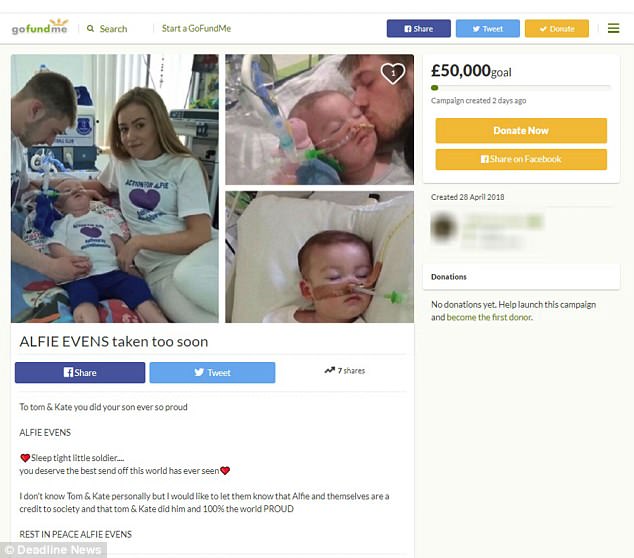 Prime Minister Theresa May has said her condolences are with the family of Alfie Evans – but she believes medical experts should be the ones to make decisions in cases such as his.

Speaking on a visit to Brooklands Primary School in Sale, Greater Manchester, Mrs May was asked if she would support an Alfie’s Law, proposed by North West MEP Steven Woolfe, which would give parents of terminally-ill children more say in end-of-life hospital care.

The 23-month-old died on Saturday after his life support treatment was withdrawn on Monday following a long-running legal battle.

Mrs May said: ‘This is a tragic case. I think all of us feel enormously for the parents of Alfie.

‘This is a great tragedy to have to go through, the death of a child, and particularly to see it happen in this way.

‘It’s important that decisions about medical support that are given to children and to others are made by clinicians, by those who are expert in that matter, but I think at the moment we all feel for Alfie’s family and our condolences are with them.’

Another page, set up to four days ago to raise £1500 for funeral costs, has been made by a user called ‘Help Alfie Evans’, and has raised £40 so far.

Kayleigh also commented on it saying the page was fake.

Louise Smith wrote: ‘Disgusting. Police should be involved.’ Kelly Edwards wrote: ‘You vile human being. How could you do this?’

A GoFundMe page set up two days is trying to raise £50,000, stating: ‘I don’t know Tom and Kate personally but I would like to let them know that Alfie and themselves are a credit to society and that Tom and Kate did him and the world 100% proud.’

Alfie was at the centre of a life support battle, between his parents, Tom Evans and Kate Jones, health officials and the justice system before he passed away on Saturday.

The little boy, who would have been two in May, was in a ‘semi-vegetative state’ and had a degenerative neurological condition which doctors had not definitively diagnosed.

His parents were fighting to take the boy to Italy for treatment after being advised there was nothing else that could be done.

His life support was switched off last Monday, but Alfie stayed alive, breathing on his own until the early hours of Saturday morning.

A Merseyside Police spokesman said there had been no reports to the force about the pages so far.