The incredible snaps of the blue sharks swimming with snorkelers in the clear blue sea were taken off the coast of Plymouth, Devon. 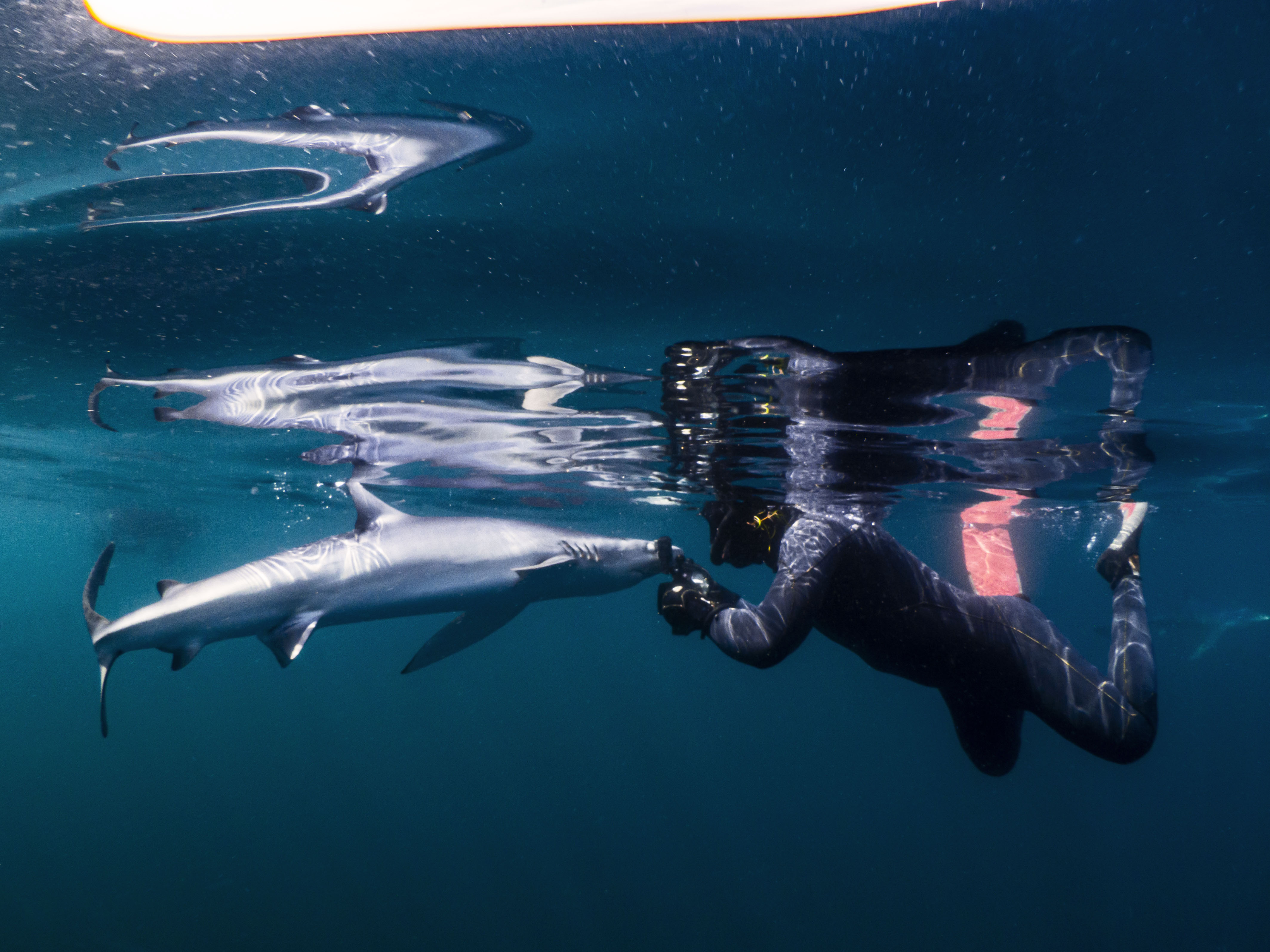 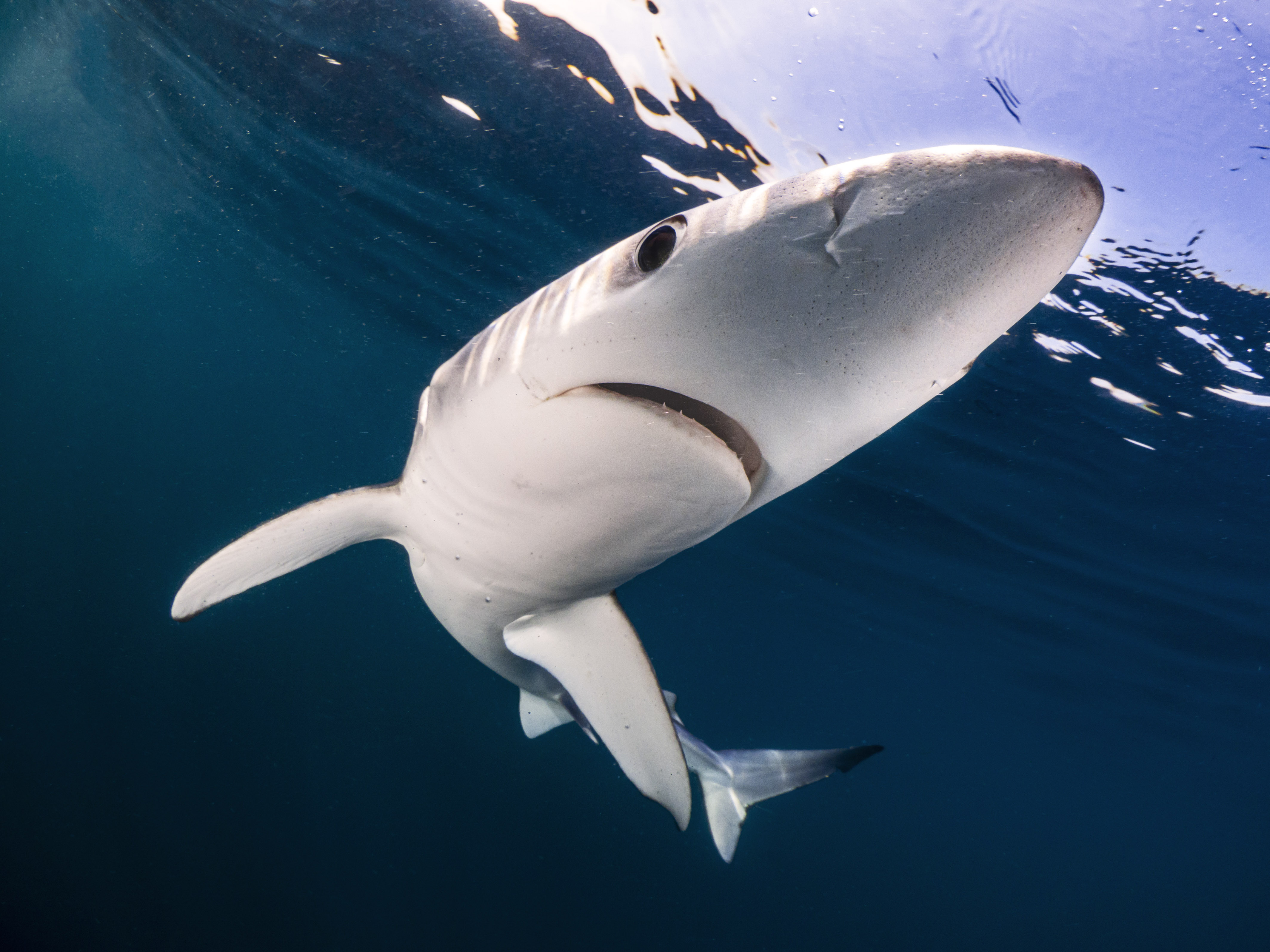 Sean Chinn, 35, a property company director from Birmingham, captured the memorable moment during a diving trip.

He was around 90 minutes from the coast when chum – a bait made of fish parts, bone and blood – was left in the water to try and attract the sharks to the boat and allow guests to swim alongside them.

Sean said: "It's an amazing experience to swim with sharks in UK waters, especially as the majority of people in the UK don't realise UK waters host an array of shark species.

"It's particularly exciting to see a large number of blue sharks in our waters during the summer months.

It's particularly exciting to see a large number of blue sharks in our waters during the summer months."

"With them being a pelagic species they are particularly vulnerable to shark fishing and being caught as by-catch.

"Seeing only females and a juvenile of only a couple of feet in length during my trip shows that the seas around the UK are an important birthing ground for blue sharks and can hopefully lead to more protection for them around the UK."

Blue sharks can be found in British waters but they are only seasonal visitors.

During the summer, they can appear in the seas around Britain as part of their highly migratory lifestyle.

They can travel over 5,700 miles in a single trip.

The male blue shark commonly grows between 6.0 to 9.3 ft, whereas the larger females commonly grow to between 7.2 to 10.8 ft at maturity.

Blue sharks have been known to go for humans and for boats out in sea and are therefore classified as a "dangerous" species.

However, Brits do not need to fear going into the water as there has not been a documented unprovoked shark attack in UK waters since 1847.

Blue sharks have been known to attack humans but they could hardly be described as frequent "man-eaters".

The predators, which have been known to reach up to 12 feet in length, have been implicated in precious few attacks on humans.

Since the year 1580 blue sharks have been thought to have been involved in just 13 biting incidents with only four of those being fatal.

And according to the University of Florida, there are only 12 unprovoked attacks on record.

Blue sharks have been known to go for humans and for boats out in sea and are therefore classified as a "dangerous" species.

There are also reports of attacks following air or sea disasters with accounts suggesting shipwrecked sailors have been maimed by them.

Blue sharks have been reported to circle swimmers or divers for 15 minutes or more before going in for a bite.

The beasts are described as "not overly aggressive" but should be approached with caution, as they may attempt a "test bite".

Like many other sharks, blue sharks are countershaded meaning the top of the body is deep blue, lighter on the sides, and the underside is completely white.

The male blue shark commonly grows between 6.0 to 9.3 ft, whereas the larger females commonly grow to between 7.2 to 10.8 ft at maturity.

Particularly large specimens can grow to up to 12 ft long.

Occasionally, an outsized blue shark is reported, with one widely printed claim of 20 feet long, but no shark even approaching this size has been scientifically documented. 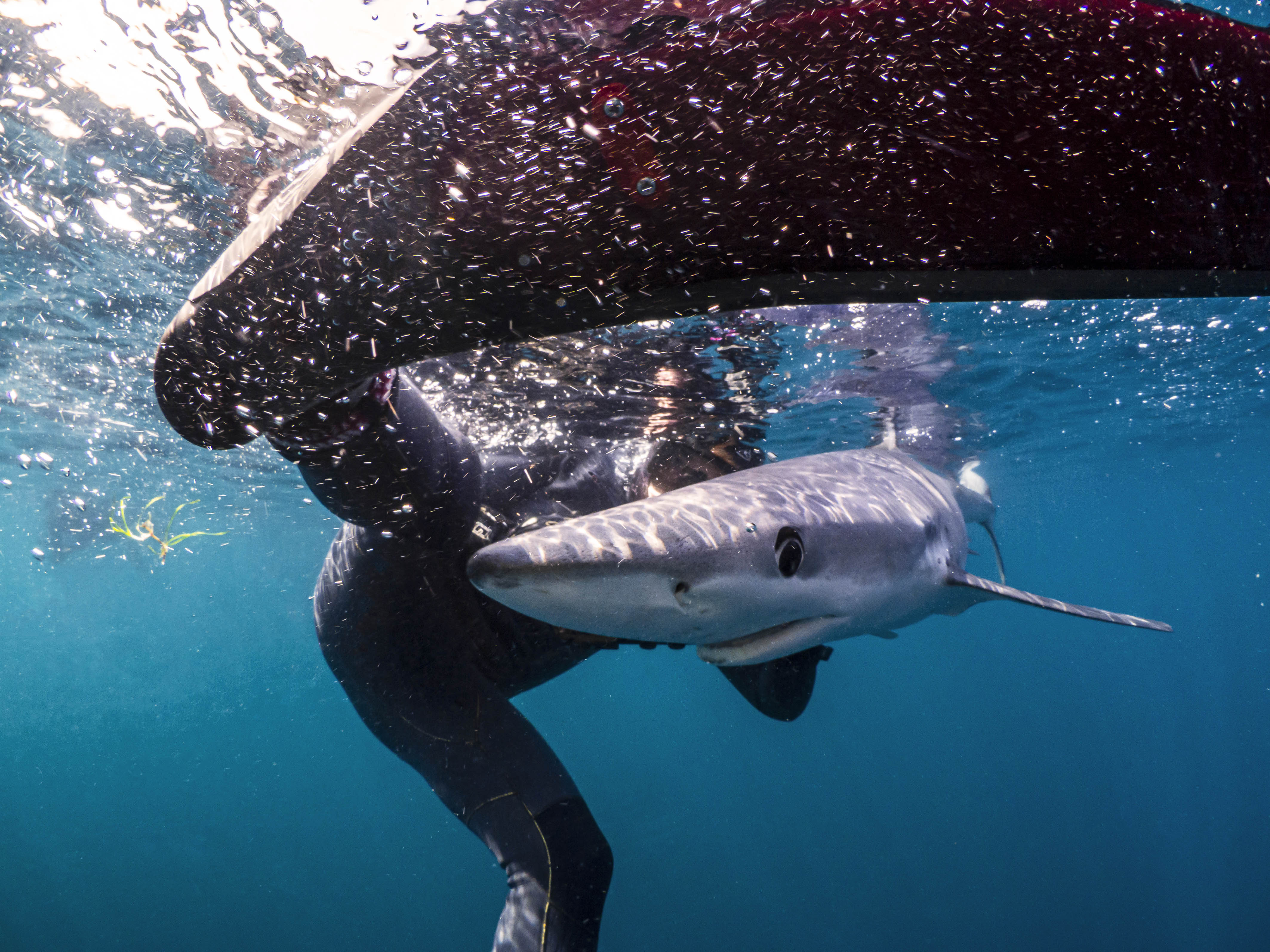 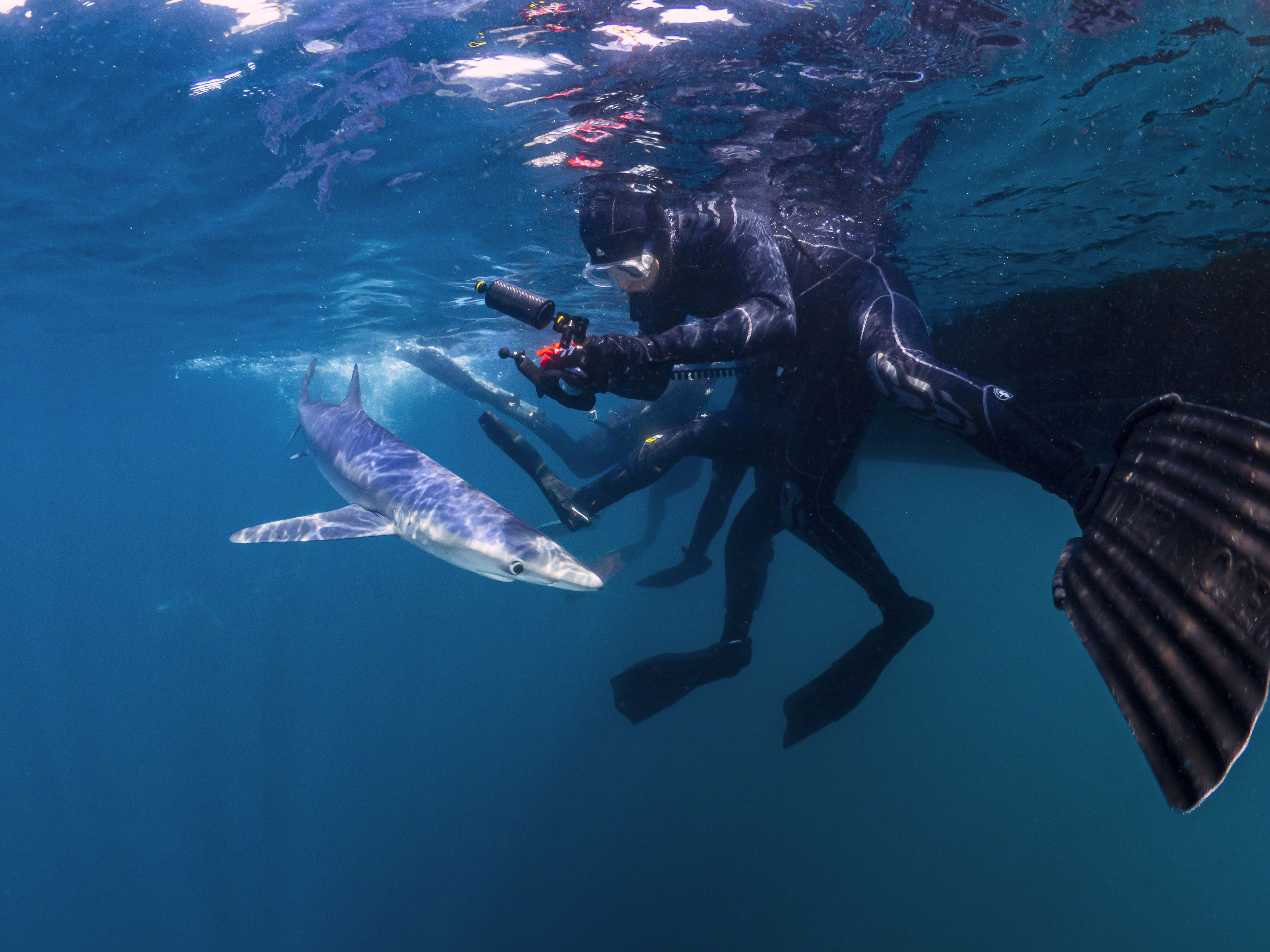 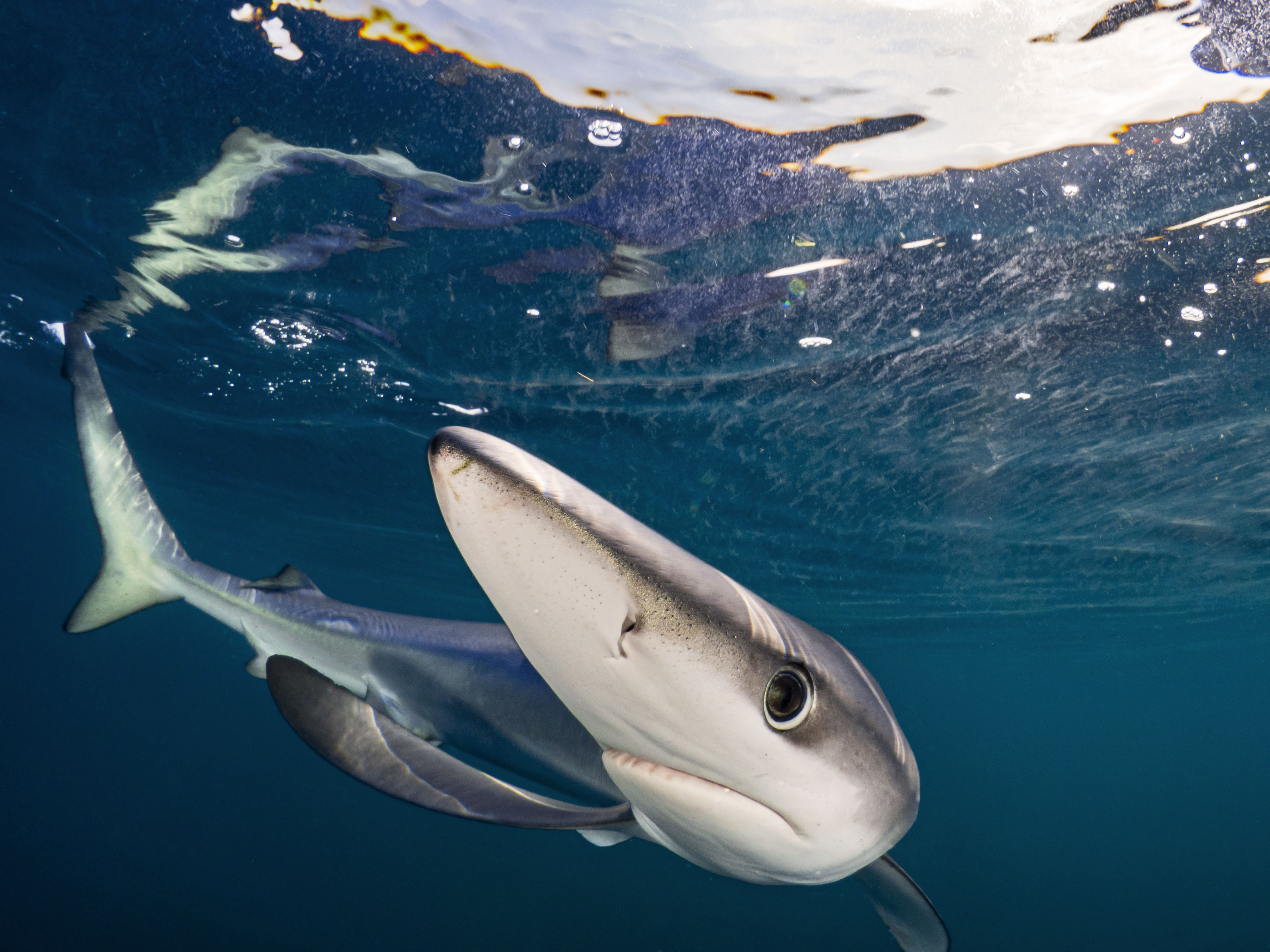 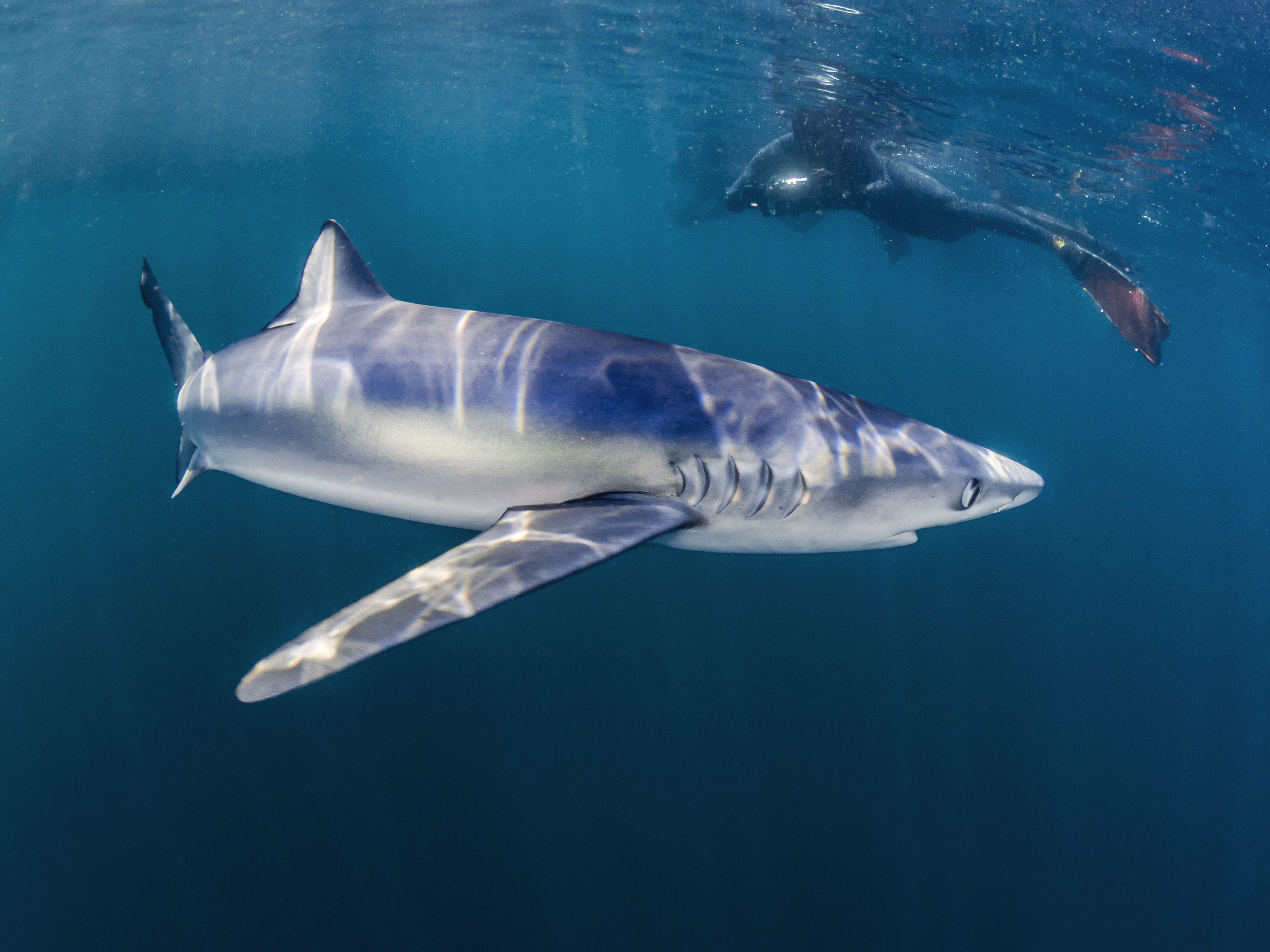