Amazon delivery driver loses the top part of his finger

An Amazon delivery driver has been left ‘in shock’ after his finger was torn off by a customer’s letterbox.

Husam Aljuburi had been half-way through his shift for the online retail giant when he shoved an A5 package through a customer’s letter box on his rounds in Slough.

The 30-year-old was delivering the ‘slim parcel’ and had pushed it into the letterbox, but when he pulled his hand back, his finger became trapped and was chopped off.

The father-of-one then flagged down a passerby, who called an ambulance, with the paramedic in attendance retrieving the fingertip and putting it on an ice block. 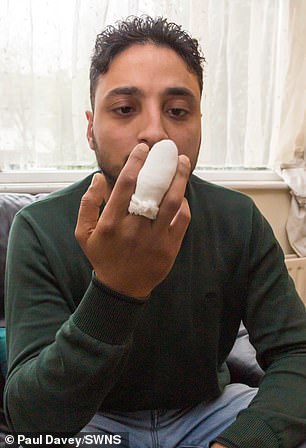 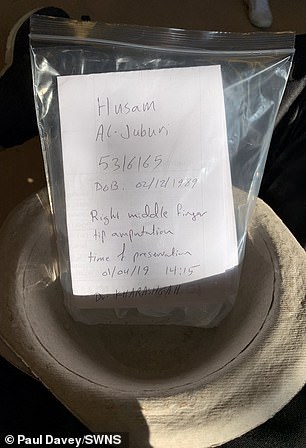 Husam Aljuburi (left) had his finger torn off while delivering parcels. Paramedics put his finger on an ice block (right) after retrieving it 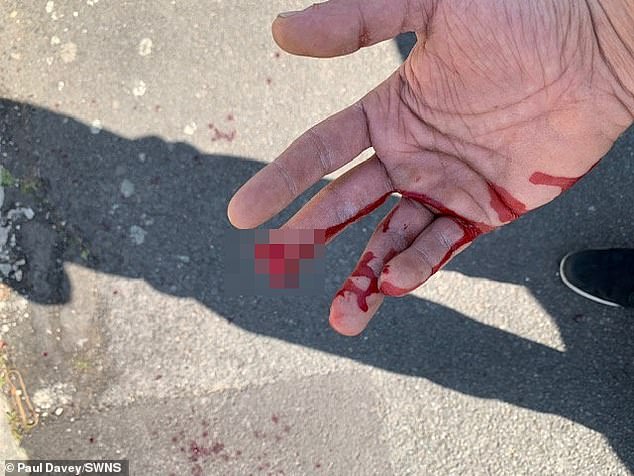 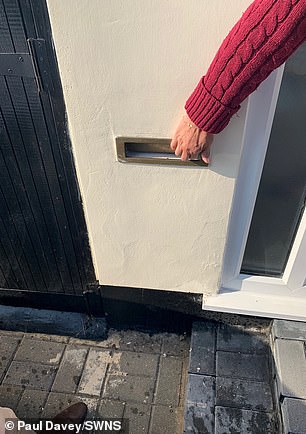 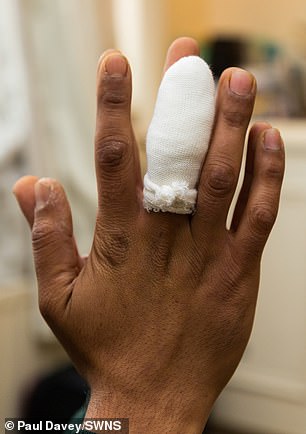 The letterbox (left) where he lost his finger. Husam has been off work since the accident and has to keep having his dressing changed (right)

Unfortunately, medics at Wexham Hospital in Slough were unable to re-attach the chopped off appendage and Husam that had the ordeal of a 45 minute operation, where more of his finger then had to be cut off.

Worried about leaving behind the undelivered parcels, Husam, from West London, then got a taxi back to the property where he lost his finger to pick up the deliveries he had stashed in his nearby car.

Traumatised Husam said he feels like he has ‘lost a part of him’ and hasn’t been able to go back to work due to the pain.

Husam is right-handed and said his life has been ‘completely changed’ by the incident.

He said: ‘PlayStation is going to be a struggle now with the controller. I like playing table tennis too but I suppose that’s going to be a lot harder now.

‘Say if I meet the woman of my dreams I’m always going to be weary now as I’m missing a part of me.

‘I know there are people worse off than me and have lost limbs but I’m still in shock. I’ve made 100,000 deliveries so I know what I’m doing.’

Hassam claimed the parcel was a DVD or book and that because of its size, he had tried to put it through the letter box. 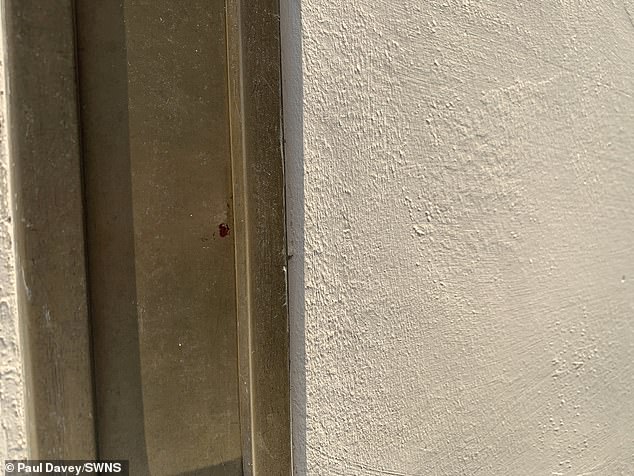 Blood marks can be seen where Husam lost his finger. He said when he returned to the property that the owner had been scrubbing it off her driveway 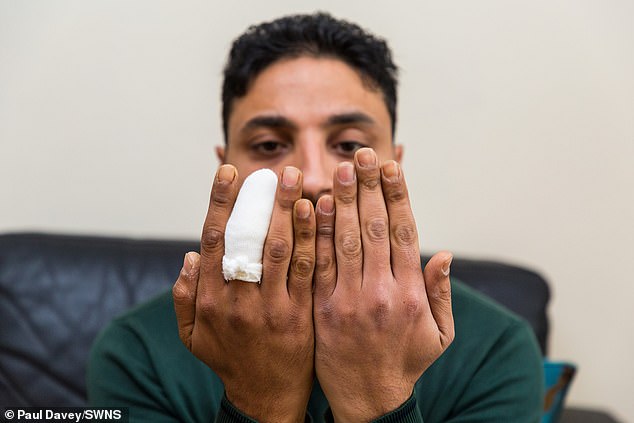 Husam (pictured above) said he had been screaming like mad after the incident. He had been a delivery driver for nine months

‘I put my hand in with all four fingers intact and then seconds later a quarter of my middle finger was off.

‘To be honest I didn’t feel anything but I was screaming like mad. I think it was the shock. I just don’t know how it happened and I’ve never had anything like this happen to me before.

‘I tend to do that as much as I can as you get customers complaining they haven’t received their parcel if you leave it outside. It’s not worth leaving things outside so wherever I can put a parcel through the letterbox I do.

‘But look where that’s got me.’ 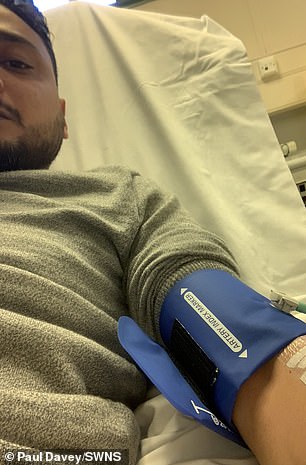 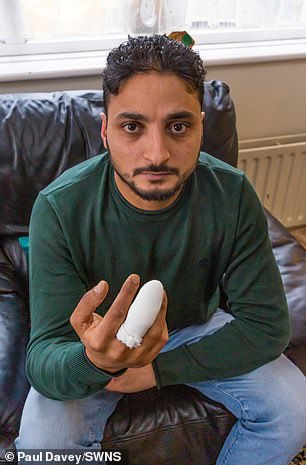 Husam (left at hospital) said the letterbox ‘destroyed his life’ and that he informed Amazon of the incident (Husam at home, right) 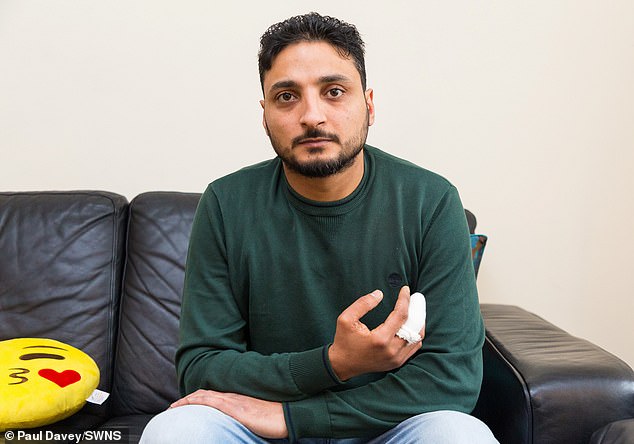 Husam, pictured above at his home in West London said Amazon haven’t sent him a card

Husam had been a delivery driver for nine months and had been delivering his 28th parcel of the day on April 2, when the accident happened.

With blood spurting from his hand, he took a photo, then grabbed his finger and stopped a passerby who called an ambulance to take him to A&E at Wrexham hospital.

Husam added: ‘The person wasn’t in so I was desperately looking around for someone to help. Luckily this a man happened to be walking past.

‘I was hoping for the best but the doctors took one look at it and basically told me there was no chance.

‘Doctors had to cut a bit more of my finger off to sew it back. It’s weird. It was such a quick operation for something that has changed my life forever.’

After four hours, Hussam arrived back at the property and found the owner of the property scrubbing away at blood on her drive.

Husam said: ‘I told her what happened and how her letterbox has destroyed my life but she wasn’t having any of it.

‘I didn’t just cut my finger off and put it through the letterbox for fun.’

When Husam phoned Amazon to inform them of the accident he claims it was ‘shrugged off’ and was told to email Amazon Flex – the delivery driver firm.

He also claims he was told to return the undelivered parcels back to the depot ten miles away or risk not getting paid for the shift.

The next day Husam invited his cousin round to type a complaint letter to Amazon.

Husam, who has to visit his GP every other day to get his dressing change, has been off work ever since.

‘I was in no fit state to drive back what with all the painkillers. Amazon haven’t sent me a card, compensation or even a gift.

‘For all those people who think Amazon is great I just want to tell them how they treat their workers.’

A spokesman for Amazon said: ‘Safety is Amazon’s number one priority.

‘We continue to be in close contact with the driver, wish him a speedy recovery and are sorry that he feels we did not handle the matter correctly.

‘We have investigated the matter and will take appropriate action.’