A south-west Sydney man is facing charges for a bout of alleged violence and abuse against his girlfriend, including an episode in which he brought a gun to bed, held the woman down and sang Twinkle Twinkle Little Star to her.

The 29-year-old Greenacre man was charged with seven offences including assault, unlawful detention, property damage and drug possession. He was granted bail in Sydney Central Local Court on Monday despite police arguing he posed a serious risk to his partner and the community.

The offences allegedly occurred in October, three months after the couple moved into a home in Greenacre together. On the night of October 28, the accused man was angered by a text message the woman, 30, received from her ex-boyfriend, according to police allegations detailed in court documents.

The man allegedly started to verbally abuse her, labelling her a “f—ing slut”, slapped her, spat on her and took her phone. In the following days, the man allegedly sent her constant text messages, contemplating suicide and saying he loved her.

The woman returned to the Greenacre home after work on October 30 after the man sent her a photo of her belongings dumped on the lawn, it is alleged. As she attempted to recover the items, the confrontation escalated when he again took her phone and saw a text from her ex-boyfriend. He threatened to kill her, calling her a “dead person”, lifted her up by the neck and smashed her phone. 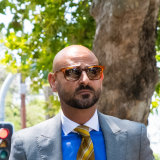 Defence lawyer Omar Juweinat says the allegations are not backed up by the available evidence.Credit:Isabella Porras

The woman was able to leave the house but, allegedly threatened the next day by the man, was forced to return. When she arrived at the home, she saw what she identified as a shotgun. The man allegedly took her into the bedroom, bringing the gun, and wouldn’t let her leave. Crying, she told him she didn’t feel safe.

According to what the woman later told police, the man pinned her down on the bed and started singing lullabies to her, including Twinkle Twinkle Little Star and Rock-a-bye Baby. He told her this was to calm her down.

With the gun allegedly by his side, the man threatened to kill himself, the woman and her family. She stayed the night at the house before leaving in the morning and making contact with triple zero.

A subsequent police search of the property uncovered an empty rifle case, a blood-stained sheet and various kinds of steroids.

The man’s lawyer, Omar Juweinat, said his client admitted to smashing his phone and losing his temper but argued the available evidence did not support all the alleged events, which he described as “American Psycho meets Tarantino”.

“This is not one of those straightforward cases where there’s a plethora of evidence in one direction,” Mr Juweinat told the court, successfully arguing for the man to receive bail.

Referencing to the man’s criminal record, which includes prior domestic violence offences, police had argued against his release from custody.

“It can start very subtly,” Ms Donovan said, including with put downs and coercive control that restricts someone’s freedom and autonomy.

She said community-wide efforts to tackle domestic violence needed to escalate dramatically if the problem was going to be meaningfully addressed.

“Every two minutes, police are getting a phone call related to domestic violence. And under-reporting is huge, which makes that even more frightening to hear,” Ms Donovan said.

On average, one woman a week is murdered by a current or former partner. A third of Australian women has experienced physical violence from the age of 15.