Washington: Photos of an American hunter posing with the dead body of a "rare" black giraffe she is reported to have just killed during a hunt in South Africa have sparked outrage.

Accompanying the post, which shows two pictures of Tess Thompson Talley of Kentucky, were the words: "White American savage who is partly a neanderthal comes to Africa and shoot down a very rare black giraffe courtesy of South Africa stupidity. Her name is Tess Thompson Talley. Please share". 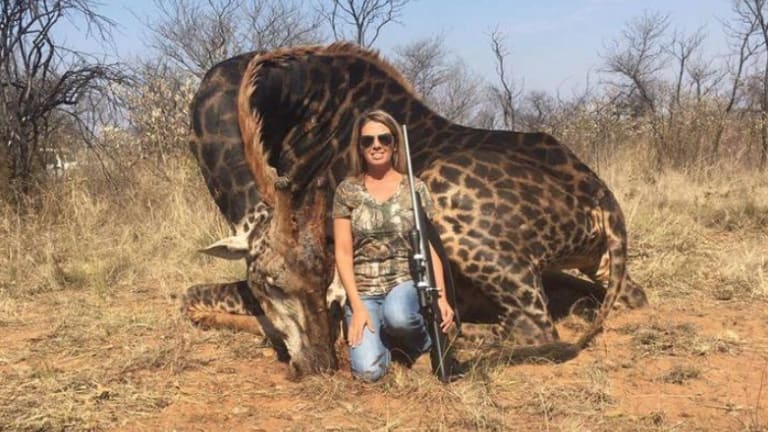 "I'm sick with rage," said a Twitter user identified as Tom Kay. "This waste of life #TessThompsonTalley is hunting beautiful creatures for a laugh."

Another tweeter, identified as Jessica Worley, urged people to "name and shame this grotesque excuse for a human being".

The photos were from a hunting trip Thompson Talley took in June 2017. "Prayers for my once in a lifetime dream hunt came true today!" she said in a Facebook post, apparently now deleted. "Spotted this rare black giraffe bull and stalked him for quite awhile. I knew it was the one. He was over 18 years old, 4000 lbs and was blessed to be able to get 2000 lbs of meat from him."

In 2015, protesters gathered outside the office and home of Minnesota dentist Walter Palmer after he killed a beloved lion, Cecil, near a national park in Zimbabwe.

Talley defended her kill in an email to Fox News: "The giraffe I hunted was the South African sub-species of giraffe. The numbers of this sub-species is actually increasing due, in part, to hunters and conservation efforts paid for in large part by big game hunting. The breed is not rare in any way other than it was very old. Giraffes get darker with age."

Talley also claimed to Fox that the giraffe she killed was too old to breed, and had killed three younger bulls who were able to breed.

"This is called conservation through game management," said Talley.

However, comedian, actor and animal activist Ricky Gervais, tweeted that "Giraffes are now on the 'red list' of endangerment due to a 40 per cent decline over the last 25 years. They could become extinct. Gone forever." He criticised Talley, calling her spoiled, and anyone else hunting giraffes.