This is the shocking moment a tiger attacked its trainer in front of the horrified audience during a circus show in China.

Footage shows the beast walking towards the handler before suddenly tackling him to the ground as other workers rushed to their colleague’s rescue today in Shanxi Province, northern China.

The man sustained minor injuries as the animal had had its teeth removed to prevent it from harming people, an official told Chinese media. 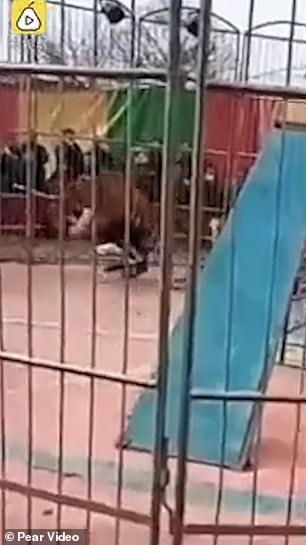 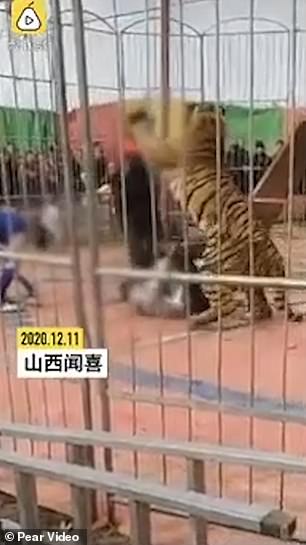 Footage shows the beast walking towards the handler before suddenly tackling him to the ground (pictured left) as other workers rushed to their colleague’s rescue (pictured right) today in Shanxi Province, northern China. The handler is said to sustain minor injuries

The incident took place on Friday during a performance by a family-run circus in Hedi Town, Wenxi County, according to reports.

Footage filmed by a spectator shows the tiger walking inside the fenced stage surrounded by a large group of audience.

The animal is seen slowly approaching its trainer before it suddenly stood up and tackled the man to the ground.

Three staff members rushed to save the handler from being mauled by the tiger while the onlookers screamed with horror.

One woman can be heard shouting in the background: ‘Hurry up, save the man! Hit it! Hit it!’ 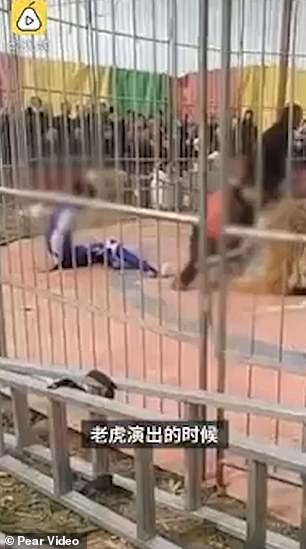 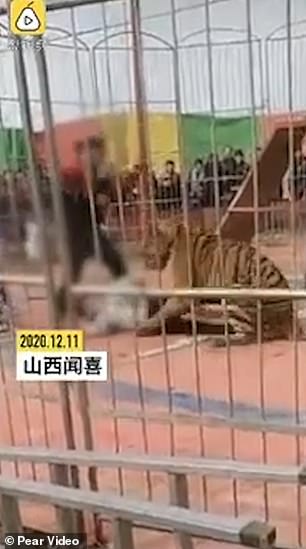 The incident took place on Friday during a performance by a family-run circus in Hedi Town, Wenxi County of Shanxi Province, according to reports. Three staff members rushed to save the handler from being mauled by the tiger while the onlookers screamed with horror

Another clip shows one of the workers repeatedly striking the animal with a long stick to drive it away.

A female worker was also wounded while trying to restrain the tiger, a witness told Pear Video.

A police officer, known by his surname Li, confirmed the incident with reporters and said that the trainer had suffered minor injuries.

‘The tiger didn’t have teeth because it’s a trained tiger,’ Mr Li said. ‘The keeper did not feed it well today and it knocked the trainer to the ground.

‘The man suffered minor injuries. He has returned after being examined at the hospital. He’s fine,’ the official added.

The incident sparked outrage on social media as animal lovers and organisations urged authorities to axe such performances.

Wendy Higgins, director of international media at Humane Society International, called it ‘an all too familiar tragedy’ after viewing the horrific footage.

She told MailOnline: ‘Wild animals made to endure a life of captivity performing circus tricks, are subjected to extremely stressful conditions that can quickly also become a risk to public safety.

‘These are complex, intelligent, sentient creatures, not circus props who exist for human amusement.’

On Weibo, the Chinese equivalent of Twitter, one viewer condemned: ‘The tiger has no teeth? What is the point of this performance? When they hit the tiger with a stick, the tiger’s reaction suggested it was definitely not the first time it had been beaten.’

Another commenter urged: ‘Boycott circuses. Tigers do not deserve to live like this.’

In October, a 440-pound black bear was filmed attacking its trainer during a circus show in central China’s Henan Province.

The attack allegedly occurred after the handler stopped the animal from eating treats thrown by the audience.

animal, by, gets, mauled, trainer
You may also like: