Apple lost just under $180 billion in market value Thursday, plunging eight per cent, the largest one day loss ever recorded by an American company.

Stocks suffered their biggest one-day pull-back since March after investors dumped shares in tech giants including Apple and Facebook and data suggested a long and difficult road to economic recovery ahead.

But Wall Street’s unloading of technology shares on Thursday ended with Apple plunging 8 per cent. Amazon lost 4.6 per cent and Facebook gave back 3.8 per cent.

There seemed to be no explicit catalyst for the sell-off, with economic data coming in roughly where the market had expected and no companies issuing foreboding warnings. But the market felt due for a breather, analysts said. 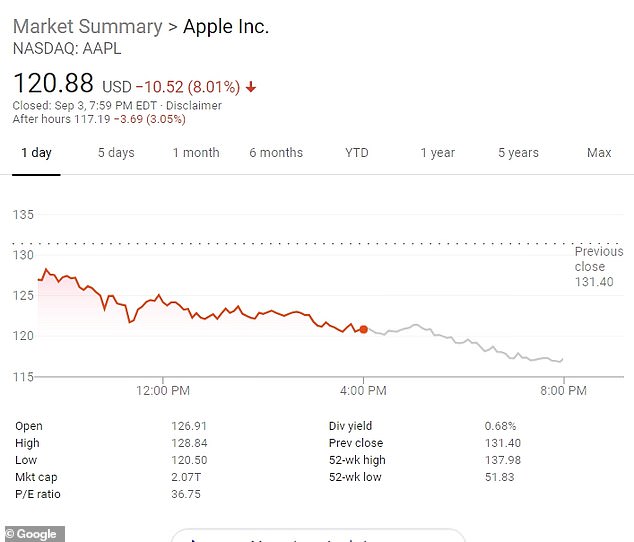 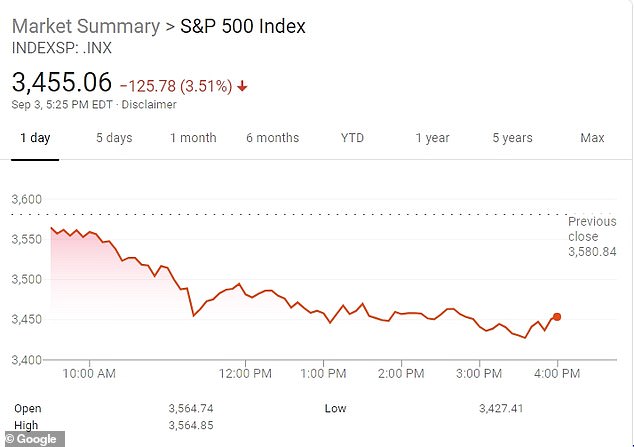 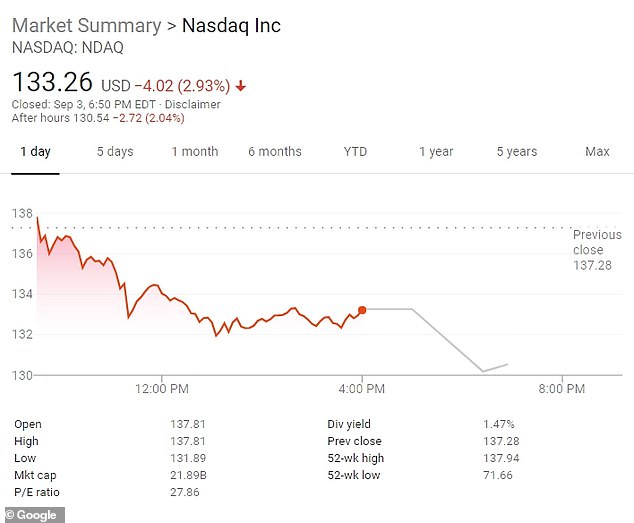 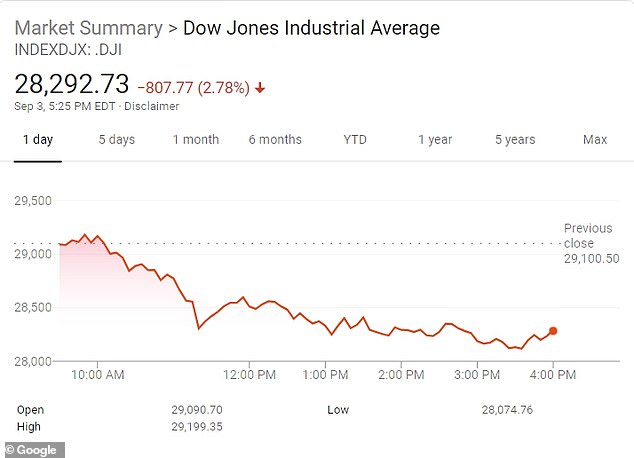 The S&P technology sector, up more than 30 percent on the year as the best-performing of the 11 major sectors, plunged 5.4 percent by the afternoon as investors looked for cheaper stocks outside the tech sector.

Shares of Facebook, Apple, Amazon.com, Microsoft and Google parent company Alphabet all sank throughout the day.

This marked a massive turnaround for the five stocks, which at the end of August were responsible for buoying Wall Street even in the face of a glum jobs outlook.

Investors have been betting on the tech giants riding out the economic crisis and their stocks have driven the market’s recovery from the pandemic lows hit in March.

Investors have been betting those companies will keep making huge profits as people spend even more time online with their devices during the pandemic.

Last month, Apple made history by becoming the first US stock to reach a market value of $2 trillion.

But this high came tumbling down Thursday as traders sold off stocks.

‘The prevalent attitude in the market now is that this is a healthy correction,’ said Mike Zigmont, head of trading and research at Harvest Volatility Management in New York. 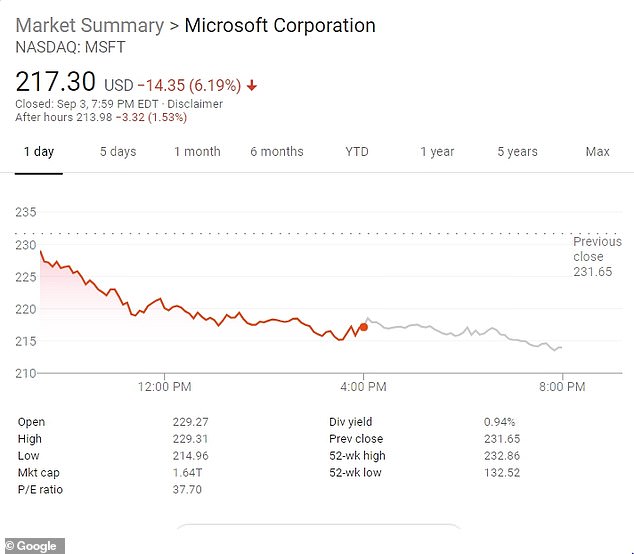 ‘(Investors) are in love with tech stocks and it’s going to take more than this for them to fall out of love with them.’

The pullback in stocks comes a day after the S&P 500 and the Nasdaq closed at record levels and the Dow came within 1.5 percent of its February peak.

Signs the US economy’s rebound from coronavirus-driven lockdowns could be stalling in the absence of another round of stimulus for cash-strapped Americans also weighed on the markets.

New claims for state unemployment benefits totaled 881,000 for the week ending August 29 – down from the 1 million in the prior week, the Labor Department said on Thursday.

Economists had been predicting about 950,000 applications in the latest week.

While the number of claims dropped more than expected, the figure still dwarfs pre-COVID times and is evidence the economy is still struggling to sustain a recovery and rebuild a job market devastated by the pandemic. 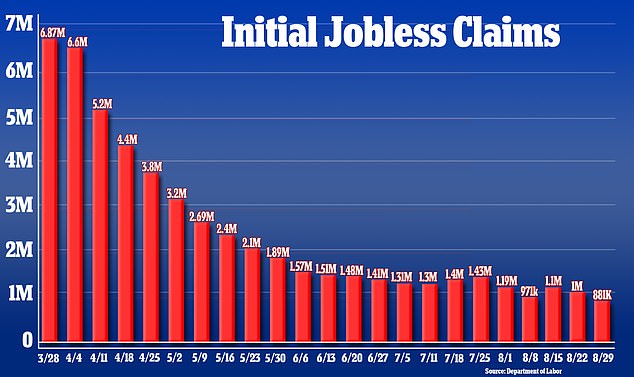 In addition, the methodology used in the weekly report to address seasonal fluctuations has changed, which analysts said led to fewer claims than over the past two months.

Separately, a survey showed US services industry growth slowed in August, likely as the boost from the reopening of businesses and fiscal stimulus faded.

The closely watched monthly payrolls report is also set for Friday which will no doubt impact Wall Street one way or another.

Shares closed 1.4 percent lower after rising more than 1.2 percent, with the group falling 3.76 percent in its biggest one-day decline since April 21. 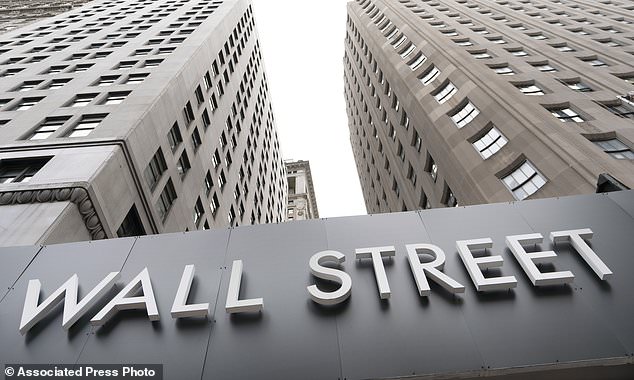 The pan-European STOXX 600 index lost 1.4 percent and MSCI’s gauge of stocks across the globe shed 2.47 percent.

MSCI’s index was on pace for its biggest one-day percentage drop since June 11 after closing at a record high of 594.06 on Wednesday.

The dollar continued to bounce, but gave up some gains after the weekly claims data, while the euro continued its recent slide to dip as low as $1.1789 after climbing as high as $1.20 earlier in the week after the European Central bank expressed concerns about its rapid rise.

Oil prices weakened, with both Brent and WTI crude hitting one-month lows on worries about weaker U.S. gasoline demand and a slowdown in the economic recovery.