Asda has sent shoppers into a frenzy by giving away free packs of vegetables left over from Christmas in a Boxing Day bonanza at stores across the UK.

Boxes of free vegetables have been spotted in several Asda stores across the UK in cities such as Edinburgh, Leeds, Newcastle and Sheffield.

Shoppers up and down the country have been making the most of the bargains which include cut price carrots, broccoli, parsnips and Brussel sprouts. 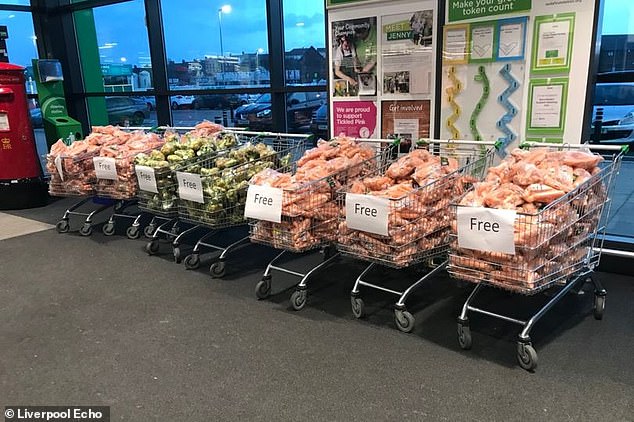 Asda stores across the country have been giving away free vegetables, such as this store in Liverpool (pictured above)

Despite the supermarket chain giving away vegetables, some social media users thought that it would be better if they were to go to homeless people or food banks 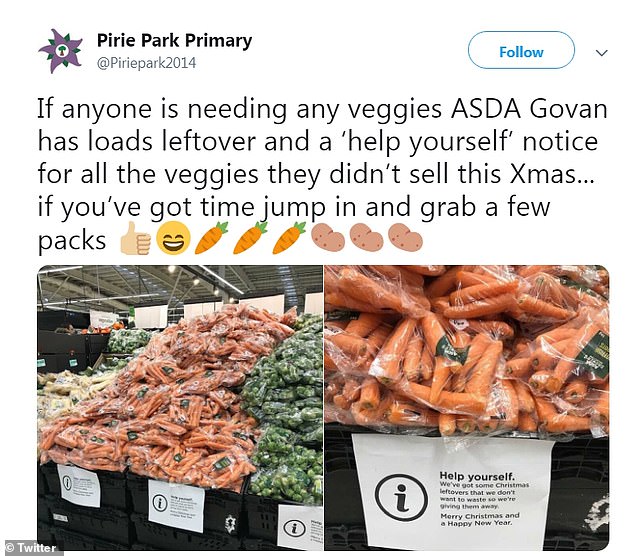 The items are free and are only available in store, so online shoppers will have to venture outdoors to grab the bargains.

A picture shared by a user in the Extreme Couponing and Bargains UK on Facebook showed vegetables up for grabs in Asda’s South Shields branch.

The veggies were labelled with a sign that read: ‘Free to a good home!’

This is while an Asda store in Glasgow is also giving away similar boxes full of free vegetables.

A Facebook post, picturing all the goods on offer at the store has gone viral after being liked and shared thousands of times since it was uploaded on Boxing Day. 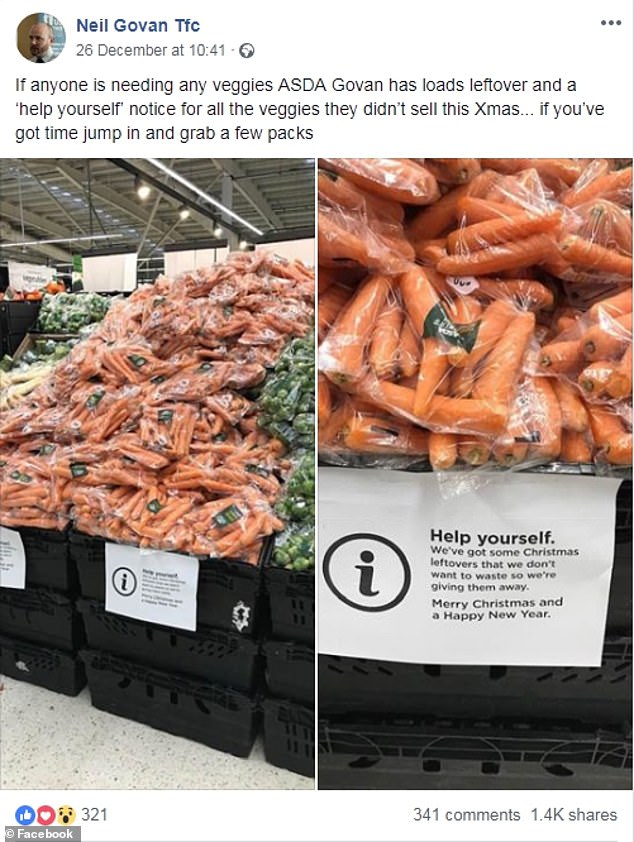 Facebook users shared posts of the free veggies. The sign wishes customers a Merry Christmas and Happy New Year and states they wouldn’t want the vegetables to go to waste

Other supermarket giants such as Morrisons have also been spotted giving away free bread.

However some shoppers say the freebies should be given to those who need it the most, and not just given out for free.

One Facebook user said: ‘They should give it to charity.’

Another commented: ‘It should be given to the homeless or food banks.’

Different Christmas highlighted that stores were giving out free vegetables

Twitter users were also keen to spread the message with one user @sirsandgoblin said: ‘Lads the leckwith ASDA is giving away carrots, parsnips etc, they’ve got S***loads, if anyone is struggling for food there is loads of veg going for free.’

Others jokes that while popular chains such as Marks & Spencer’s were shut, that they would be going to Asda instead.

Diffrent_Christmas said: ‘So marks and Spencers is shut. But. All the carrots, parsnips and broccoli in Asda Ayr are FREE! Pass it on!’

Pirie Park Primary also tweeted a photo of the free food and wrote: ‘If anyone is needing any veggies ASDA Govan has loads leftover and a ‘help yourself’ notice for all the veggies they didn’t sell this Xmas… if you’ve got time jump in and grab a few packs.’

Users were responding to each other in order to let others know where bargains had been spotted.

According to The Sun Asda said there’s a limit to how much food it can donate due to restrictions in storage facilities.

But added that it’s made a £20million investment to help charities increase their facilities.

Through the Asda Fight Hunger Create Change campaign, it also supports FareShare and Trussel Trust charities in giving out 500,000 additional meals each year for people in need, a spokesman said.

Asda, frenzy, giv, sends, Shoppers
You may also like: