The asylum seeker who posed as a 15-year-old GCSE student but was accused of being as old as 30 is almost certainly an adult, an official investigation concluded today.

The unnamed man who came to Britain from the Middle East spent six weeks as a Year 11 pupil at Stoke High School in Ipswich, Suffolk, until pupils and parents threatened a boycott.

The Home Office has launched an investigation into how he was believed and then placed in a school with children as young as 11.

The student was suspended earlier this month after a fellow student posted a Snapchat picture of him in uniform in a classroom with the message: ‘How’s there a 30-year-old man in our maths class?’

His classmates also discovered what appeared to be old pictures of him on Facebook, showing him with a full beard, a hairy chest and swigging a beer, and one even claimed he confessed to being a married father-of-two.

Today whitehall sources confirmed that the 6ft1ins pupil, who spoke broken English, was assessed as being aged over 18 in an investigation ordered by the Home Office.

He is now being treated an adult asylum seeker, meaning that he faces being thrown out of the UK if his claim is refused.

The asylum seeker’s younger brother was also taken out of class but Home Office sources told MailOnline they are sure he is a child – but he is believed to have been moved out of the area. 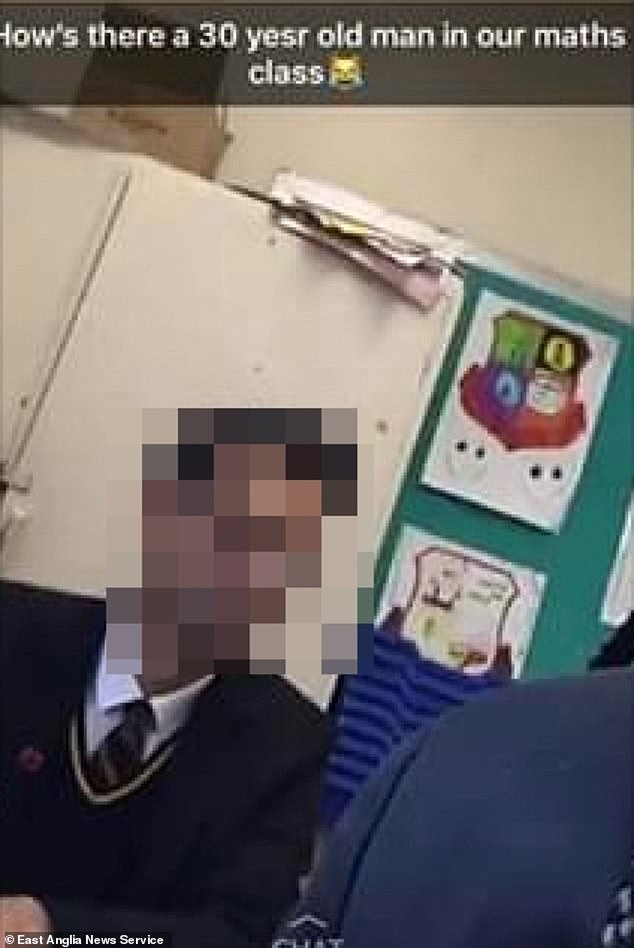 Some outraged parents withdrew their children from the school over the scandal.

They claimed children were potentially being put in danger by the presence of a man posing as a boy.

How young asylum seekers are aged by height, facial hair and voice – but many are ‘given benefit of doubt’

Asylum seekers must be treated as an adult if their physical appearance and demeanour ‘very strongly suggests that they are significantly over 18 years of age’.

Assessments of physical appearance can include indicators of age such as height, build, facial hair and voice pitch.

When assessing demeanour, officials can take into account observations on the individual’s mannerisms, body posture and eye contact.

Instructions state age assessments cannot always provide the same degree of confidence about treating an individual as an adult or a child as can be provided by reliable documents, adding: ‘To allow for this, the principle of ‘the benefit of the doubt’ is applied.’

Earlier this year, a watchdog report revealed some local authorities had raised concerns the ‘benefit of the doubt’ policy was being applied ‘too readily’ in relation to unaccompanied asylum seeking children.

The report, published in March by the Chief Inspector of Borders and Immigration, cited data indicating that from the start of July 2016 to the end of June 2017, the Home Office had raised 705 age disputes.

Age verification processes came under scrutiny in 2016 when teenagers were transferred to the UK from Calais following the closure of the ‘Jungle’ refugee camp.

Controversy erupted when Tory MP David Davies claimed some arrivals ‘don’t look like children to me’.

The Home Office has refused to reveal the newly assessed age of the man or any details of his background due to data protection issues.

The conclusion was reached without the need for medical tests to help determine his age.

This suggests that experts believed it was obvious he was over 18 or the man himself admitted it.

The Home Office is currently investigating how the man’s claim to be aged 15 came to be believed.

A Home Office spokesman said: ‘We are fully committed to safeguarding children and are looking into the circumstances of this case to understand how it was handled.

‘Age-disputed cases remain a challenging area of work in which no single assessment technique, or combination of techniques, is likely to determine an individual’s age with precision.

‘In the absence of clear and credible documentary evidence, Home Office staff must rely on physical appearance and demeanour to make an initial assessment on whether a person claiming to be a child is under 18.

‘If an individual is assessed to be under 18, but subsequent concerns about their age are raised – for example by a school – we will act quickly to reconsider the case.’

The spokesperson confirmed that asylum seekers claiming to be aged under 18 are believed and treated as children by the Home Office unless they meet one of three criteria.

They are only assessed as adults if there is ‘clear and credible documentary evidence’ that they are, an approved local authority assessment reaches the conclusion or if two immigration officers rule that their ‘physical appearance or demeanour very strongly suggests they are significantly over 18 years of age’.

In the case of immigration officers making the ruling, at least one of them has to be of Chief Immigration Officer grade or above. 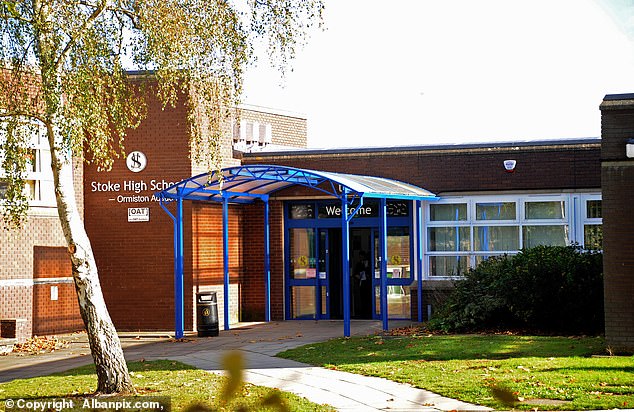 The Home Office spokesperson added: ‘When there is doubt about an individual’s claim to be a child, the individual will be referred to a local authority’s social services department for a careful, case law-compliant age assessment and they will be treated as a child until a decision on their age is made.

‘If an individual is assessed to be over 18, we will process any asylum claim as being made by an adult. If the application is unsuccessful, and appeal rights are exhausted, removal action will be pursued as appropriate.

‘In the absence of documentary evidence, Home Office staff are only able to treat a claimant as an adult if their physical appearance and demeanour very strongly suggest that they are significantly over 18 years of age – and where two officers have reached this conclusion independently.

‘The threshold is set deliberately high so that only those who are very clearly over 18 are assessed as adults.’

The man started at Stoke High School which is run by the Ormiston Academies Trust soon after the start of term in September.

It was suggested that he was the brother of a Year 7 pupil at the school who was claiming he was 12-years-old and appeared to look his age.

Pupils became suspicious when they saw that the clean shaven pupil appeared to have the shadow of a beard on his face.

They then discovered the Facebook profile in his name which described him as having been an architecture student at the Islamic Azad University in Abadan, Iran, before living in Erfurt, Germany.

The pictures on the now deleted profile showed him with a beard and drinking a bottle of beer on a street, and also included an image of the boy who was said to be his younger brother.

It was also revealed that the pupil allegedly bombarded a 15-year-old girl classmate with text messages, prompting her to complain to safeguarding staff – because she was worried about his true age.

But the girl was told that there was nothing ‘sinister’ about the texts as they were not of a sexual nature. When shown the alleged Facebook picture of the pupil with a beard, the teacher allegedly said that people matured at different ages. She stopped receiving messages from him after she complained.

A mother of another pupil said the man had told her son that he was aged 25 and was married with two children when he was asked if he wanted to join in a game of football at break time.

The pupil was removed from the school earlier this month on the day he was due to sit a mock GCSE maths exam and has not been seen there since. The younger pupil who claimed to be his brother was taken out of school at the same time.

The Ormiston Academies Trust confirmed at the time that the pupils were ‘not attending the school’ and that it had asked the Home Office to investigate the case.

The school has not made any new statement and Suffolk County Council has also not responded to requests for comment.

The stepfather of a girl in the same class as the pupil said he had gone to the school to complain before the man was removed and had contacted Suffolk Police to make a complaint that a grown man was ‘posing as a pupil’ in her class.

He said: ‘They logged my call and advised me to go back to the school and demand what action they were going to take,

‘I ended up speaking to this teacher who said that the Facebook picture of the boy was a case of mistaken identity.

‘The teacher actually threatened that all the parents who were jumping on the bandwagon could face legal action because complaining about the pupil was a criminal offence. He was basically calling all the parents bullies.

‘I explained that I was sorry if the pupil turned out to be a genuine 15-year-old, but that parents had a responsibility for the safeguarding of children in their care, as should the school.

‘The teacher told me that he had children himself and all the paperwork and been looked at for this person and had been passed by the Home Office. I was absolutely livid and was trying to behave myself.

‘He was so ignorant and not really listening to what I was saying. I wanted to kick him up the backside and tell him not to be so naïve. My last words to him were, ‘You have not heard the last about this’.