Baroness Hale has revealed she drew ‘satisfaction’ from controversially ruling that Boris Johnson acted unlawfully in the months leading up to Brexit.

The former President of the Supreme Court and her fellow ten judges sparked a constitutional row when they decided in September 2019 that the Prime Minister’s decision to suspend Parliament for five weeks was ‘void’.

In an interview today with Desert Island Discs on BBC Radio 4, Baroness Hale says she had no regrets and reveals that the spider brooch she wore to deliver the bombshell ruling – and which was the source of much speculation at the time – cost just £12.

‘The satisfaction is that we managed to reach a reasoned conclusion with which all the justices agreed,’ says the 76-year-old. 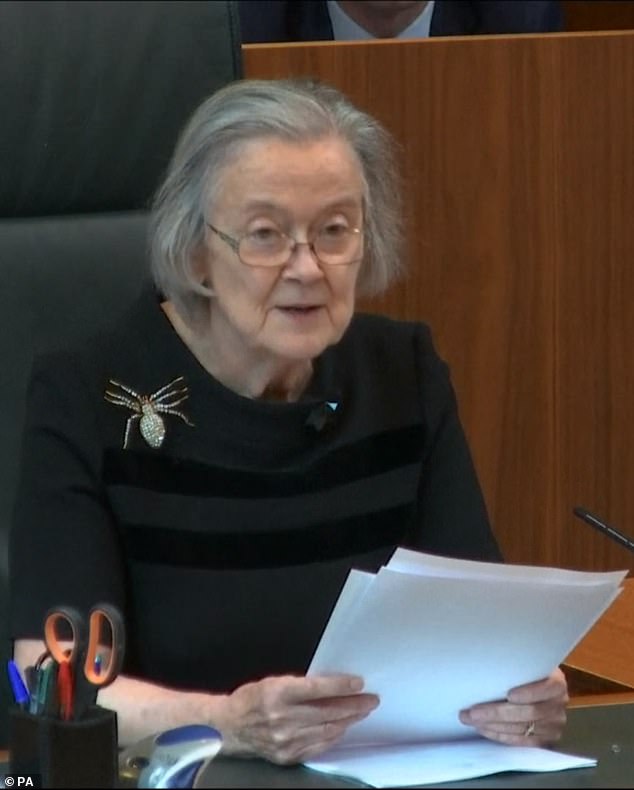 ‘It doesn’t give us any satisfaction at all to tell the Prime Minister or a public authority that what they have done is unlawful, but it is satisfying to reach a judgment.’

The ruling found that the suspension – or prorogation – had ‘the effect of frustrating or preventing the ability of Parliament to carry out its constitutional functions’ to debate the Brexit deal.

While some saw the ruling as a defence of Britain’s unwritten constitution, many regarded it as a back-door bid to undermine the result of the 2016 referendum.

Lady Hale – once the subject of an article in Vogue magazine – believes that much of the criticism was unfounded.

‘It’s difficult for me to understand that because we were not debating whether or not Brexit should happen,’ she says.

‘That had been decided in the referendum and we are a democracy. What we were deciding was what the Government could and could not lawfully do against the context of the Brexit process.’

Her camel spider brooch gained almost as much attention as the prorogation ruling, with people believing it reflected a message about her beliefs. But Lady Hale says: ‘It never crossed my mind that anybody would draw any conclusions from the fact that I was wearing a spider rather than a dragonfly or a frog or anything else that I might have been wearing. While some saw the ruling as a defence of Britain’s unwritten constitution, many regarded it as a back-door bid to undermine the result of the 2016 referendum

‘That particular spider my husband told me cost £12. I think it’s an inspiring story but there were no hidden messages in it whatever.’

A proud feminist and equal rights campaigner, Lady Hale was appointed President of the Supreme Court in 2017 and retired last year.

She admits that her outspoken nature has sometimes counted against her, adding: ‘I am sure there will be things about me that not everybody likes.

‘Possibly my propensity for speaking my mind when I want to. Sometimes my tactlessness. I am sure I am tactless from time to time.’

Lauren Laverne’s Desert Island Discs interview with Lady Hale is broadcast on BBC Radio 4 today at 11am. The programme will be repeated on Friday at 9am.

apo, Baroness, Hale, her, reveals
You may also like: