The UK is set for a rather wet and windy morning, particularly so in the north and the west, according to BBC meteorologist Carol Kirkwood. The BBC Breakfast presenter warned that these conditions are going to be travelling eastwards through the course of the day. The country is also set to experience some “gusty winds” in the weather too.

Ms Kirkwood told viewers: “A couple of fronts through the day will be moving from the west to the east, bringing all of that rain.

“We start the day with some mist and fog patches across parts of west and north of London, East Anglia and Hampshire.

“That will lift and some eastern areas are getting off to a relatively dry start.

“But it won’t last because the rain in the north where it’s heavy will continue its journey moving eastwards.” 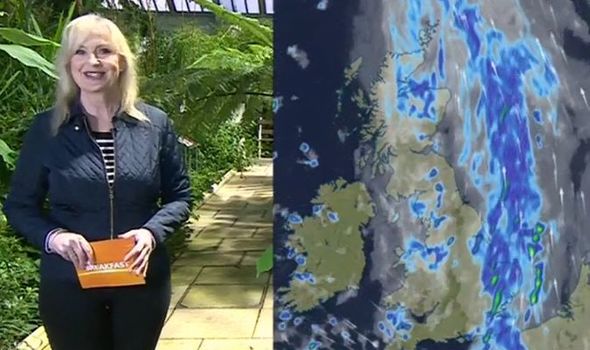 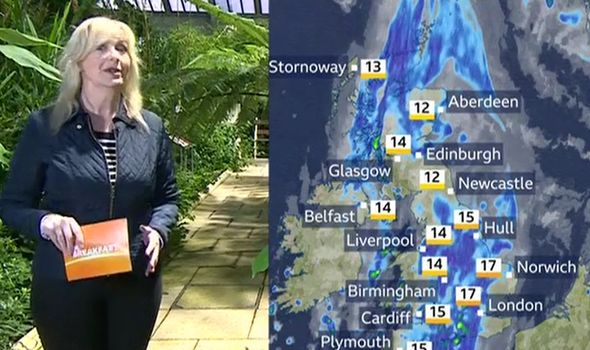 She continued: “As it clears Northern Ireland, you’ll be left with some hefty showers.

“Gusty winds will move through the Irish Sea and also the English Channel.

“But even inland it’s going to be gusty today with temperatures ranging from 12 in the north to 17 in the south.

“As we head on through the evening and overnight, our rain continues, eventually pouring into the North Sea.” 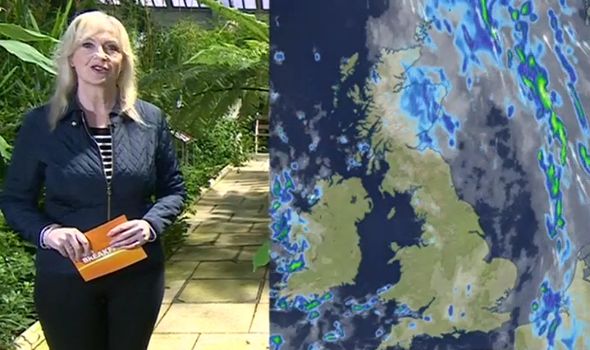 The weather presenter added: “But we’ve got a curl around the far north of Scotland.

“So for northeast Scotland and northern isles, it’s going to be wet.

“Under clear skies, it’s going to be quite a cool night, cooler than the one just gone.” 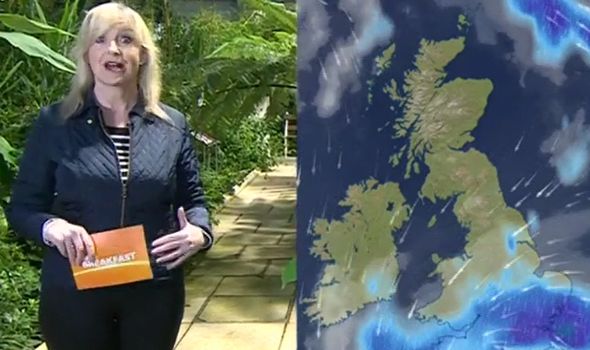 Ms Kirkwood said: “The temperatures for some rural areas will fall as low as freezing so for some there will be some frost around.

“Tomorrow will start off with that rain across the northern isles and northweast Scotland.

“It will move across northern areas generally through the course of the day.

“For many of us though there will be a lot of sunshine around with fair amounts of cloud.

“There’ll also be a few showers across Wales, and one or two into Northern Ireland.”