BBC Weather: Europe set for SNOW and heavy rain over next 24 HOURS – ‘not good news!’

BBC Weather forecaster Darren Bett warned high pressure will push northwards towards the end of the week and allow for heavy rain and unsettled conditions to strike the continent. Mr Bett said: “Wetter weather moving in off the Atlantic and heading its way towards the Mediterranean.

Temperatures, though, dropping considerably across much of Scandinavia

“The Eastern side of the Med still looks largely dry. There will be some sunshine and some warmth as well.

“One or two showers developing inland over the higher ground. But a much drier day for the Balkans.

“Temperatures, though, dropping considerably across much of Scandinavia and cooler winds coming down from Bisque and bringing all this wet weather as well.”

The BBC forecaster said there will be more longer spells of rain across Europe on Friday. 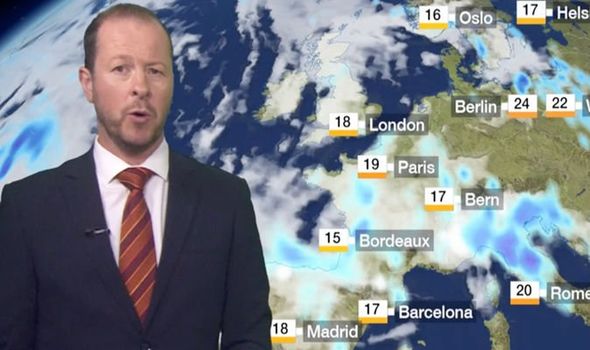 He added: “Still raining probably in Warsaw and up towards Oslo on Saturday. Some wet weather working its way into central parts of the Mediterranean and more rain in the Balkans given all the flooding that we had earlier on in the week.

“It’s not going to be good news. That rain is going to sit around there further north into Oslo over the next few days.

“It could be heavy and it could be thundery as well. And we will see some showers returning back to Berlin probably as we head to early next week.

“Still dry in Athens with some sunshine and perhaps a few showers for London and more particularly into Paris. But it remains on the cooler side there is Porto.”

The Met Office warned rain will come as early as Friday across the UK as a band of miserable weather moves north.

Forecaster Aidan McGivern said: “On Friday we’ll see an initial spell of rain pushing its way west across parts of England and Wales followed by showers followed by a lot of cloud cover.

“Compared to recent days it’s going to be much more cloud in the sky across England, Wales and southeastern Scotland

“Temperatures on their way down and certainly on that North Sea coast it will feel quite chilly with the wind coming in from the east.

“A lot of cloud cover so the weather changing ever so slowly over the next few days but still some warm and bright weather to be found.”