Beautician, 25, avoids jail after hurling pint glass into crowd of women and wounding one of her friends by mistake

A beautician who hurled a pint glass into a crowd of women only for it to hit one of her friends by mistake has been spared jail.

Demi James, 25, left businesswoman Stacey Finney with wounds to her arm and hand after the glass hit the victim accidentally when it was aimed at someone else during a drunken fight.

Miss Finney, 32, had to have treatment to her elbow and doctors also repaired a tendon in her hand which needed eight stitches after it was severely damaged in the incident.

The injuries left her unable to drive her two children to school and she was off work for a month.

James, from Platt Bridge, Wigan, Greater Manchester accompanied Miss Finney to hospital and at first assumed the victim would accept the incident was an accident. 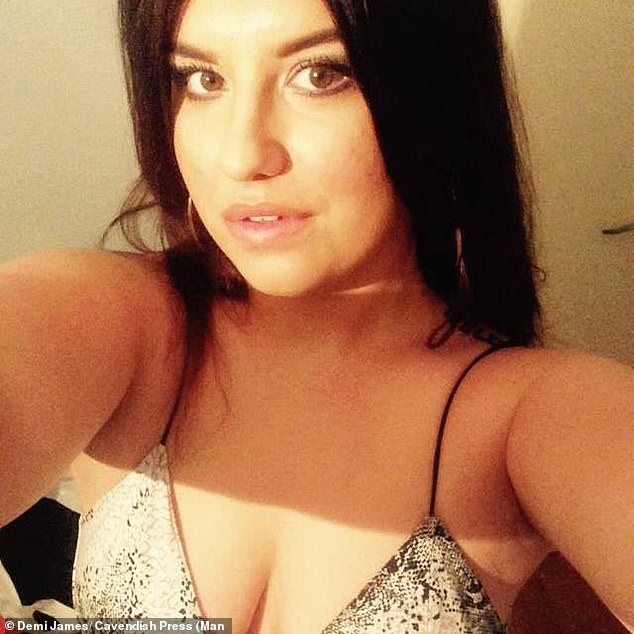 Beautician Demi James (pictured), 25, has been spared jail after she hurled a pint glass into a crowd of women only for it to hit one of her friends by mistake on a night out in Atherton, near Wigan 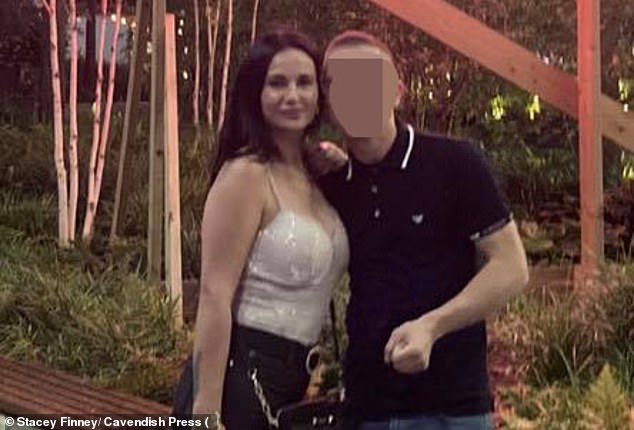 Stacey Finney (pictured), 32, had to have treatment to her elbow and doctors also repaired a tendon in her hand which needed eight stitches after it was severely damaged in the incident

But she was reported to police 26 days later by Miss Finney who complained of suffering financial loss. It is believed she is now claiming damages through the taxpayer funded Criminal Injuries Compensation Authority which compensates victims of violent crime.

At Bolton Crown Court, mother-of-two James faced jail after she admitted unlawful wounding but was given 15 months imprisonment suspended for two years.

The court heard that she had a history of drink-related violence but claimed the glass accidentally ‘came out of her hand.’

She and the victim who have been friends for four years are still on good terms despite the assault. Doctors said it is expected the victim who runs a bar will regain full use of her hand.

Earlier the court was told James and Miss Finney had been for a night out together in Atherton, near Bolton when trouble broke out in the Mountain Dew pub on July 5 last year. 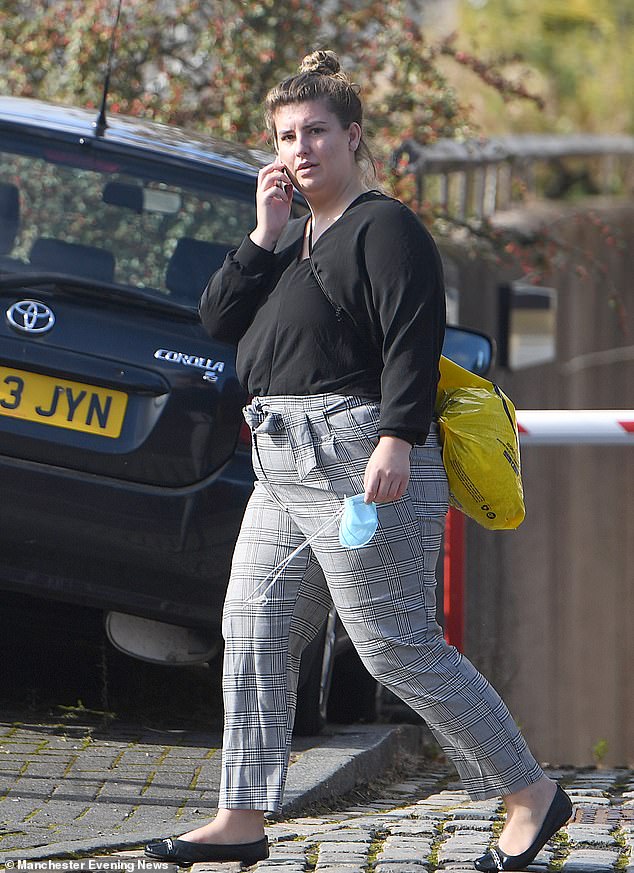 Mother of two James faced jail after she admitted unlawful wounding but was she was given 15 months imprisonment suspended for two years. Bolton Crown Court heard she had a history of drink related violence. Pictured: James at court yesterday

James who had given birth to her second child just three months earlier was joined by her boyfriend during the evening. But an argument broke out between the couple in the beer garden over suspicions he was being unfaithful and several other women became involved in the row.

Mr Colin Buckle prosecuting said: ‘Stacey moved away as the argument continued but she saw Miss James throw a glass towards the group of girls that had become involved. The glass missed its intended target and then hit Stacey and she saw the injuries it caused.

‘The victim left the pub whilst injured and received a phone call from Miss James in which she enquired about her injury. It was decided Stacey should go to hospital and Miss James attended there with her boyfriend and stayed until the victim went for an X-ray.’

Asked why it took almost a month for mother of two Miss Finney to report her friend to police, Mr Buckle said it was possible it might assist in her claim for compensation with the. 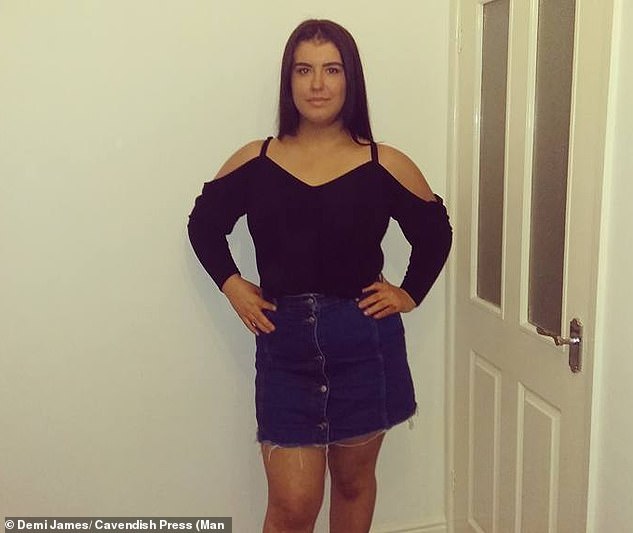 He added: ‘The complainant didn’t given a statement to police until July 31 when she realised the seriousness of the injury and the limited function she had with her finger. I suppose there is inevitable conclusion to draw that it might be that the complaint decided that was the way forward.’

James was interviewed the following September and offered a prepared statement saying the attack occurred after she was ‘surrounded and left feeling intimidated’ by the group of young women.

She admitted holding the glass but denied throwing it intentionally saying: ‘There was aggression, I was intimidated and outnumbered and I just recall the glass coming out of my hand although I didn’t intend to throw it at anyone. Stacey and I remained friends afterwards and I thought she had accepted this was an accident.’

But in a statement to police eye witness Lauren Derbyshire said: ‘Demi suddenly threw a glass that she was holding towards my face. I saw her lift her arm up above her head and throw the glass. I was able to move quickly and dodge the glass but I was sure it was aimed at me.’ 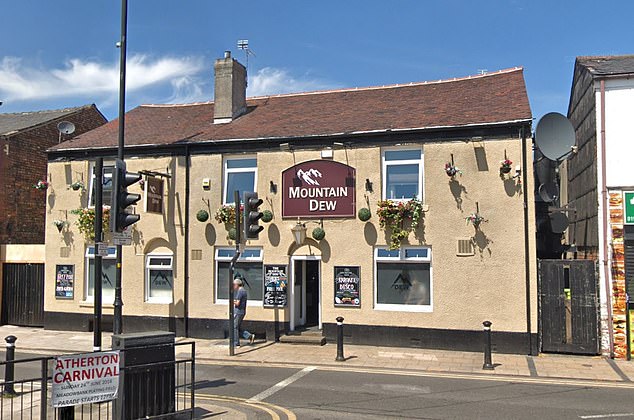 ‘Stacey moved away as the argument continued but she saw Miss James throw a glass towards the group of girls that had become involved. The glass missed its intended target and then hit Stacey and she saw the injuries it caused,’ the court heard. Pictured: The Mountain Dew pub

Miss Finney herself said: ‘Demi stood up and hurled the glass towards a group of girls. This has caused significant financial impact on me as I have been unable to work and I will only be receiving sick pay.

‘It has upset me that my children has seen their mother with these injuries. I was also unable to wash without getting the dressing of the wound wet. I was not able to drive or take my children to school and was off work for a month.’

The court heard James had six previous offences on her record including a drunken assault upon a neighbour and racially abusing a taxi driver. She also had a caution for occasioning actual bodily harm following an assault in a pub whilst she was intoxicated.

In mitigation defence lawyer Paul Treble said James and her boyfriend had been in an abusive relationship and she had been drinking heavily. The couple have since split up.

Mr Treble said: ‘We accept that by throwing a glass there was obviously a serious risk of injury but this assault was reckless. She deliberately threw the glass but wasn’t deliberately aiming at somebody. 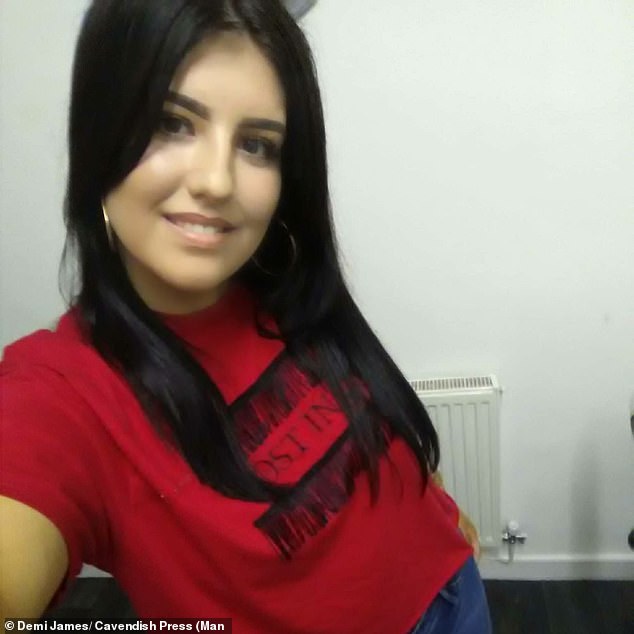 In mitigation defence lawyer Paul Treble said James (pictured) and her boyfriend had been in an abusive relationship and she had been drinking heavily. The couple have since split up

‘She just felt threatened by the group around her. It was a charged environment and she was upset with her partner and she was in drink. She wasn’t carefully weighing up her actions. She wasn’t targeting a specific individual.’

Mr Treble added: ‘She accepts full responsibility for what happened. She and Miss Finney were friends and still are. The victim has been supportive and has been anxious about the possibility of her going to prison.

‘We’re not criticising her but the reason this came to the attention of police was because it was an injury which caused her financial loss and she was anxious to secure financial compensation as she is entitled to.

‘The defendant is genuinely remorseful. She was in an abusive relationship with her boyfriend and when your partner is causing problems, lying to you and you’re doubting his fidelity, emotions run high.’

Sentencing Judge Timothy Stead said: ‘It does look as though the reason Miss Finney complained was so he could make make her claim – but she has been an innocent victim of crime so she is entitled to make a claim.’

He told James: ‘I just hope you realise how close you have come to going to prison and you are someone who has to be careful when going out drinking. Throwing a glass at somebody – even if you hit the wrong person – is serious.

‘But you have two young children and you have to put them first. I am assured that you have rid yourself of an abusive relationship which I know has caused you problems.’

James will also have to complete 30 rehabilitation requirement days and take part in the ‘problem solving court’ programme for female offenders.