Satellite imagery captured before and after North Korea conducted what it called a ‘very important’ test at a satellite launch site suggested it had tested a rocket engine, experts said on Monday.

Images taken on Saturday before a test at the Sohae satellite launching station showed vehicles likely to be used in an engine test, next to a testing bunker.

Pictures of the same site a day later showed the vehicles had been moved, while soil behind the bunker appeared to have been disturbed, likely by a rocket exhaust. 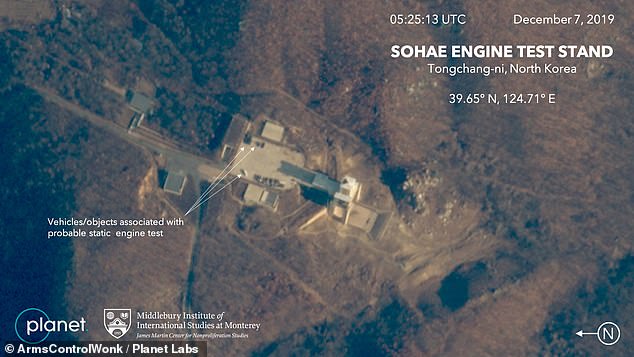 An image of North Korea’s satellite launch facility at Sohae showed vehicles associated with engine testing at the facility on Saturday, ahead of a ‘very important’ test 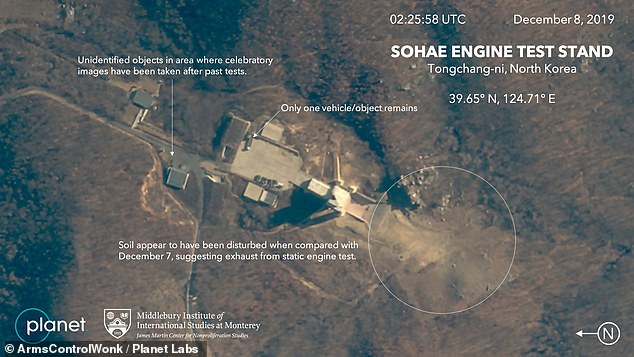 Another image, taken a day later, showed the vehicles had been moved and soil behind a testing bunker hand been blasted aside by a rocket exhaust

It comes as a year-end deadline set by North Korea for Donald Trump to soften his stance on denuclearisation and return to negotiations looks certain to expire.

On Saturday, Kim Jong-un announced that denuclearisation was now ‘off the table’ in talks, and blasted Trump for playing a ‘trick’ to satisfy his domestic political agenda.

Jeffrey Lewis, of the Middlebury Institute of International Studies in California, said: ‘Vehicles and objects appear on Dec. 7 to conduct the test.

‘They are mostly gone on Dec. 8, but the ground appears to have been disturbed by the exhaust from the test.’

Asked on Monday if it had been an engine test, a spokeswoman of Seoul’s defence ministry declined to confirm the suggestion, saying site monitoring and detailed analysis were underway with U.S. intelligence authorities.

The Sohae site has never before been used to launch an intercontinental ballistic missile, but it has been used to test missile engines.

Past satellite launches have helped scuttle talks with the United States.

North Korean leader Kim Jong Un has warned he may take a ‘new path’ if the United States fails to address his demands.

Jeffrey Lewis, an expert in North Korean rockets from the Middlebury Institute of International Studies in California, pointed out the differences on Twitter 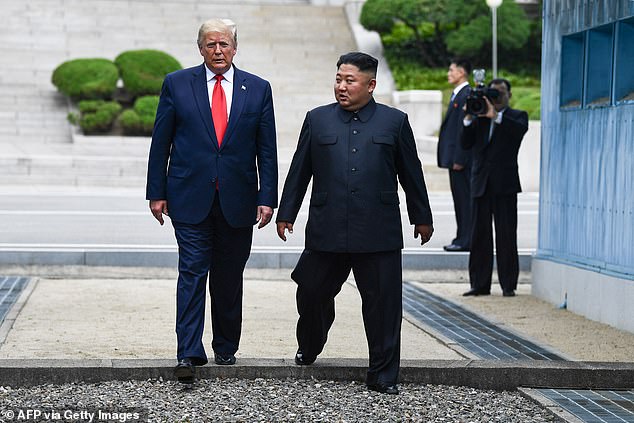 He did not say what the path would be, but observers have said it might include the launch of a space satellite, which would help North Korea demonstrate progress in its rocket capabilities without returning to overt military provocations, such as firing an intercontinental ballistic missile (ICBM).

Some South Korean experts said North Korea may have tested a solid fuel rocket engine, which could allow it to field ICBMs that are easier to hide, faster to deploy and therefore harder to shoot down.

‘They may well have tried to see the thrust and duration of a solid-propellant rocket engine for ICBMs,’ a diplomatic source in Seoul told Reuters.

‘That’s effectively what they can do on the ground at this point without firing anything into the air.’

Following the test, Trump warned Kim Jong-un on Sunday that he has ‘everything’ to lose if he does not rid his country of nuclear weapons.

‘Kim Jong Un is too smart and has far too much to lose, everything actually, if he acts in a hostile way,’ the president tweeted on Sunday.

‘He signed a strong Denuclearization Agreement with me in Singapore.

‘He does not want to void his special relationship with the President of the United States or interfere with the U.S. Presidential Election in November.

‘North Korea, under the leadership of Kim Jong-un, has tremendous economic potential, but it must denuclearize as promised.

‘NATO, China, Russia, Japan, and the entire world is unified on this issue!’ 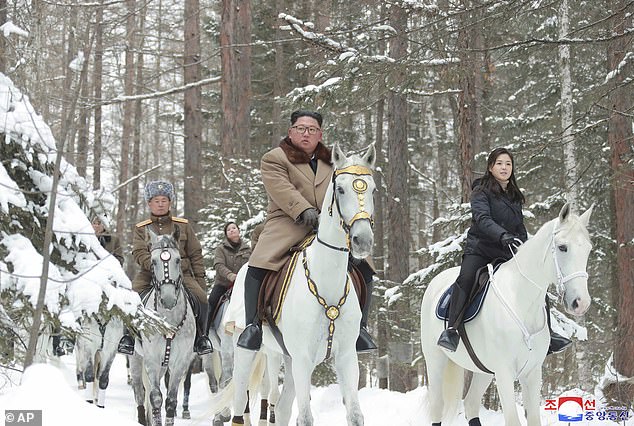 Kim has made two high-profile trips up a sacred mountain on horseback, a trip typically undertaken by members of the ruling family when important decisions need to be made

Kim Dong-yub, a former South Korean Navy officer who teaches at Kyungnam University in Seoul, also said North Korea could have tested a solid fuel engine as it has been striving to shift from liquid fuel.

North Korea appears to have used Soviet-era liquid propellants in all its ICBM or satellite launches in recent years, while developing solid fuel missiles to be fired from a submarine, officials and analysts say.

In March 2016, state media said Kim oversaw a ‘successful’ test of a high-power solid-fuel rocket engine ‘designed and manufactured in the Korean style’.

Kim also said the North’s rocket industry had ‘firmly transitioned’ to solid fuel from liquid propellants, while inspecting a newly developed missile based on a submarine-launched ballistic missile in February 2017.

‘It could be solid fuel or they might have developed a new engine,’ said Jeong Han-beom, director of the Graduate School of National Security at Korea National Defense University.

‘In any case, it’s meant to improve their capabilities for ICBMs, which need to be tested several times, while sending a message to Washington that we might go back to those old days of military confrontation if negotiations fail.’

after, And, before, images, sugges
You may also like: