Donald Trump has emerged odds-on favourite to win the US election as gamblers abandoned Joe Biden overnight to place a flurry of bets on the President.

Trump was favourite at 4/5 early Wednesday, according to aggregate site Oddschecker, versus Joe Biden at 5/4.

Biden was way ahead before the polls closed at 1/2, but that lead quickly fell away as results rolled in showing Trump had out-performed the polls, just as he did in 2016.

Trump has now fallen back to 58 per cent, putting him narrowly ahead but with results still too close to call.

£400million has been wagered on the election, UK betting site Betfair says. 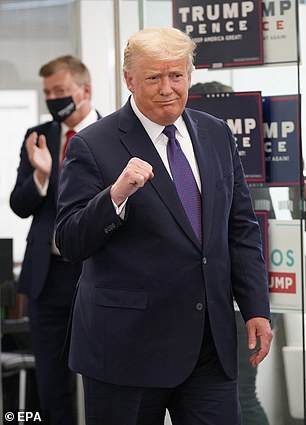 Donald Trump has emerged as narrow odds-on favourite to win the US election according to bookmakers, as gamblers abandoned Joe Biden (right) overnight to bet on the President

While a majority of money bet on the election had gone on Biden, bets placed on the night itself were mostly placed on Donald Trump.

Betting ahead of election day had largely gone with pollsters, who predicted Joe Biden as the likely victor.

But as early results started coming in, the narrative flipped as it appeared Trump had out-performed his polls – just like he did in 2016.

Wins in the swing states of Ohio and Florida for Trump took the option of an early, easy win off the table for the Democrats.

But later on Biden flipped the state of Arizona, keeping him in the race, and won the key rust belt state of Minnesota.

It now appears the race will come down to three so-called Rust Belt states – Michigan, Wisconsin and Pennsylvania.

However, counts in all three states were progressing slowly. Officials in Pennsylvania had warned ahead of time that the count could take several days to complete.

That raises the prospect that the overall winner of the election might not become clear until Friday, when the deadline for counting votes expired.

It has also teed up the possibility of a bitter and protracted legal battle similar to the one that played out in Florida in the 200 Bush vs Gore election, that ended up going all the way to the Supreme Court.

Trump and Biden were locked in tight races in battleground states across the country Tuesday night as they concluded an epic campaign that will shape America’s response to the surging pandemic and foundational questions of economic fairness and racial justice.

From coast to coast, races were too early to call in the most fiercely contested states on the map, including Florida, North Carolina, Georgia and Pennsylvania. 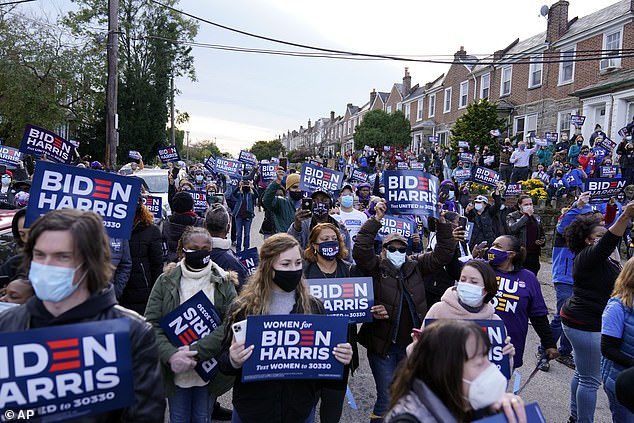 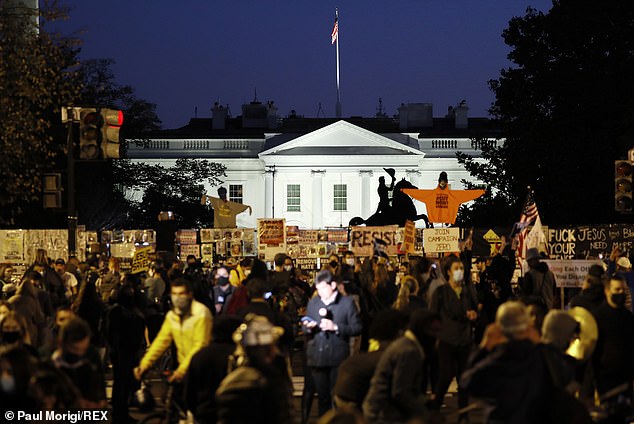 Americans made their choices as the nation faced a confluence of historic crises with each candidate declaring the other fundamentally unfit to navigate the challenges.

Daily life has been upended by the coronavirus, which has killed more than 232,000 Americans and cost millions of jobs.

Millions of voters put aside worries about the virus – and some long lines – to turn out in person, joining 102 million fellow Americans who voted days or weeks earlier, a record number that represented 73 per cent of the total vote in the 2016 presidential election.

Democrats typically outperform Republicans in mail voting, while the GOP looks to make up ground in Election Day turnout.

That means the early margins between the candidates could be influenced by which type of votes – early or Election Day – were being reported by the states.

Biden entered Election Day with multiple paths to victory, while Trump, playing catch-up in a number of battleground states, had a narrower but still feasible road to clinch 270 Electoral College votes.

betting, Donald, markets, say, Tru
You may also like: