See, I’m not THAT lame! Joe Biden shows off surgical boot and says he’s feeling ‘good’ after fracturing his foot playing with his German Shepherd Major

Joe Biden said he was doing ‘good’ after he fractured his foot while playing with his German Shepherd Major and showed off the black medical boot on his right foot.

The president-elect was seen wearing the boot for the first time Tuesday, when he arrived at The Queen theater in Wilmington to introduce his economic team.

He thanked reporters for asking and raised his foot to show off his medical gear.

He arrived at his economic event walking slowly but without a noticeable limp. He stood at a podium to make his opening remarks but, in contrast to last week’s event where he introduced his national security team, there was a table and chairs for the president-elect to sit while his new economic team spoke.

But after standing to speak for about 15 minutes Biden limped visibly as he went to sit down after introducing his choice as Treasury Secretary, former Federal Reserve chair Janet Yellen.

Biden suffered the injury on Saturday and visited an orthopedist at Delaware Orthopaedic Specialists in Newark, Delaware, for an examination Sunday afternoon, his office said. 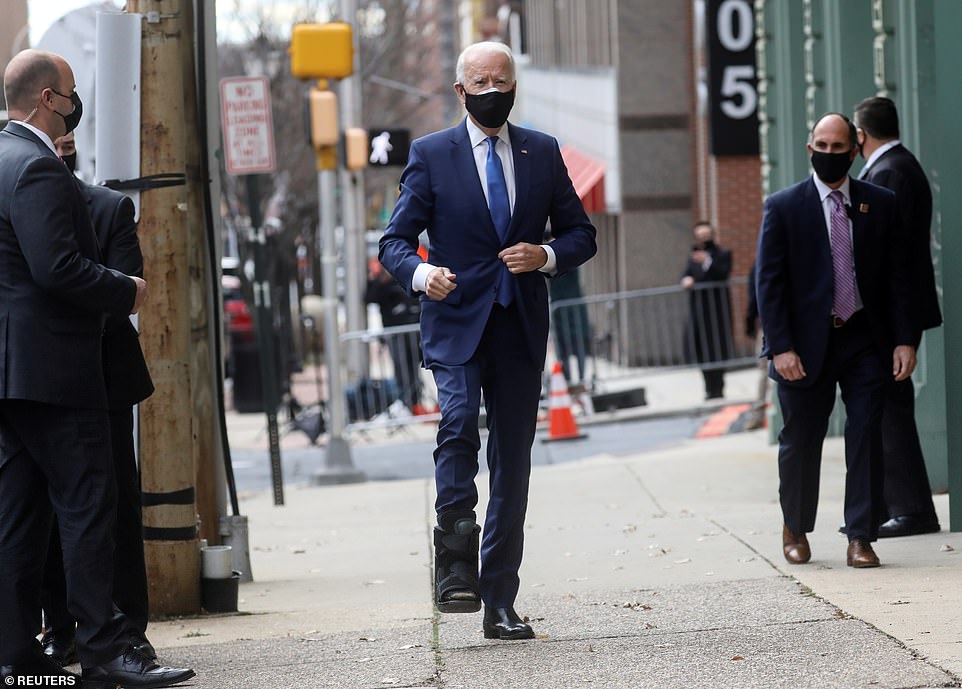 Joe Biden fractured his foot playing with his dog, he showed off his injury in Wilmington 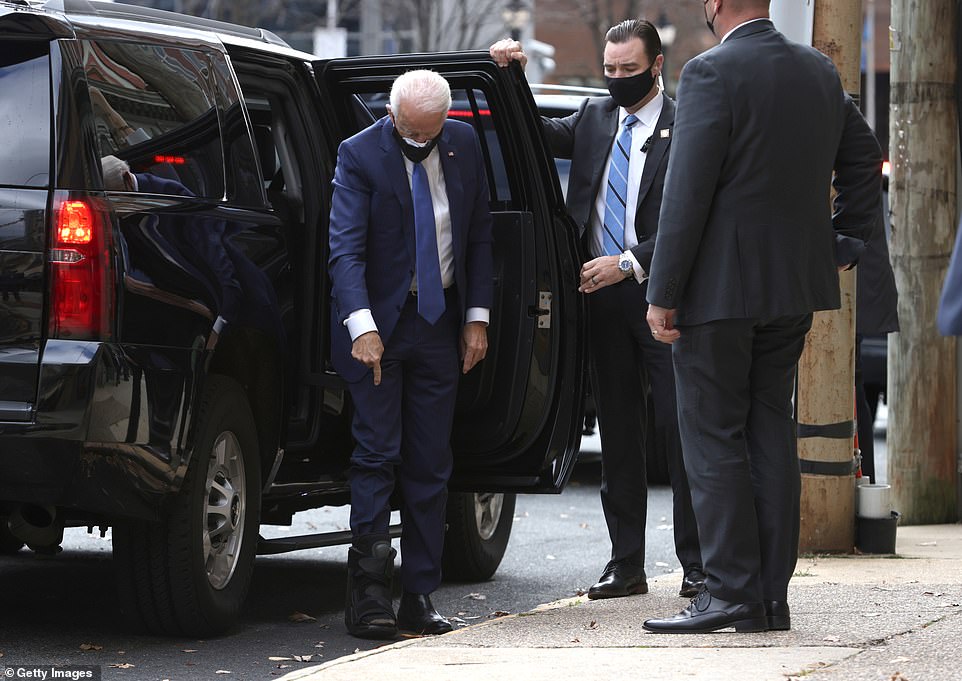 Joe Biden points to his injured foot, where he’s wearing a surgical boot 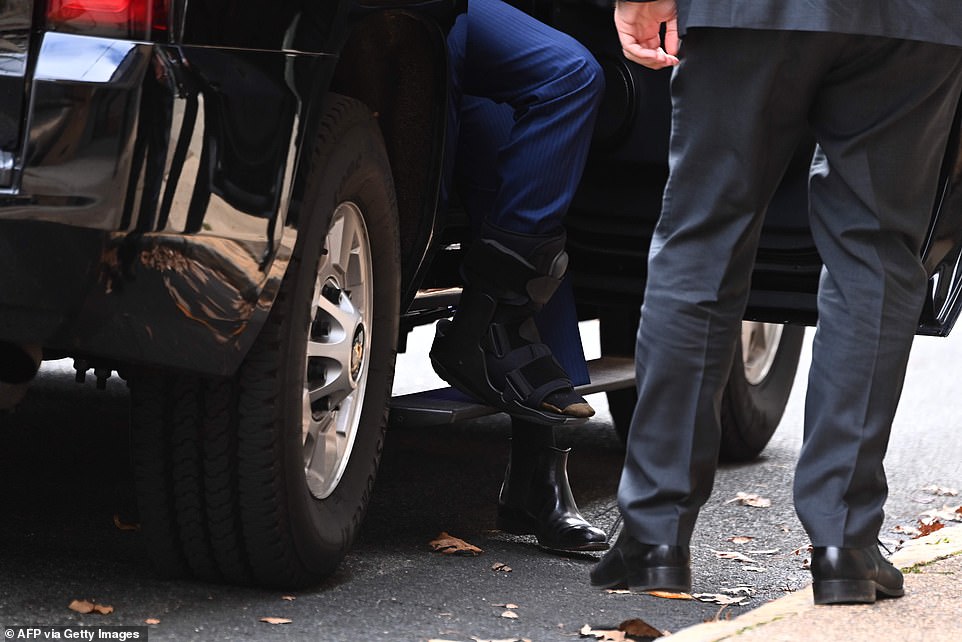 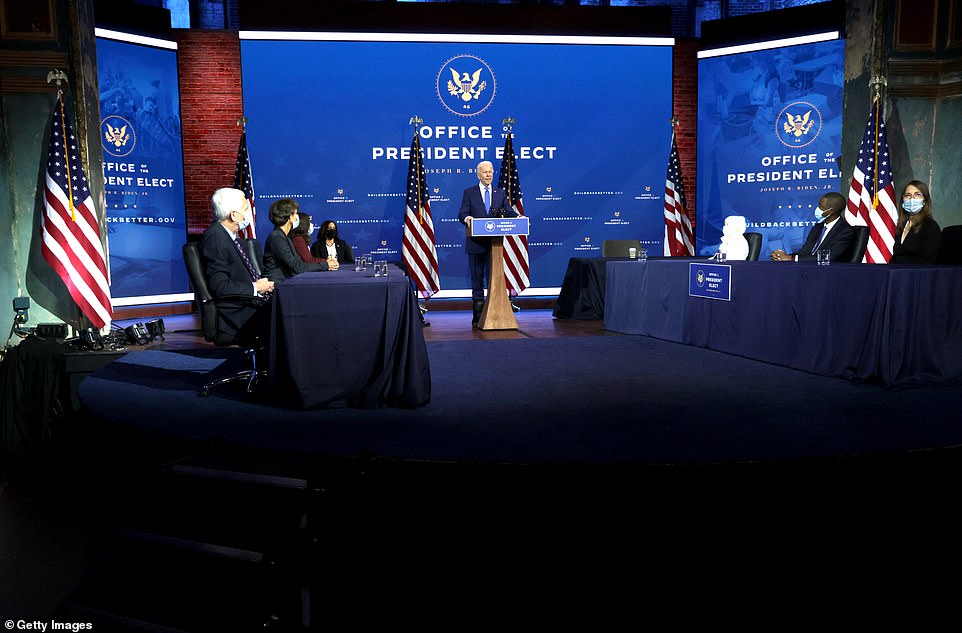 On his feet: Joe Biden stood to spoke for 15 minutes to introduce his economic team picks including (right) Janet Yellen his Treasury Secretary pick 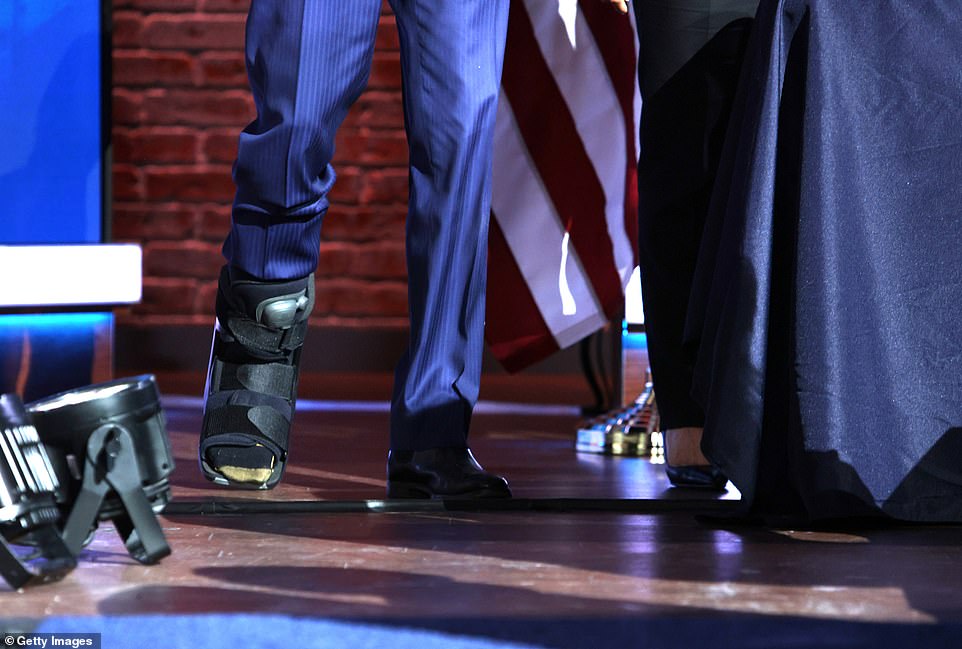 Boot on stage: Biden’s surgical boot is set to be a feature of life for several weeks, although it is unclear if he will still be in it for his inauguration 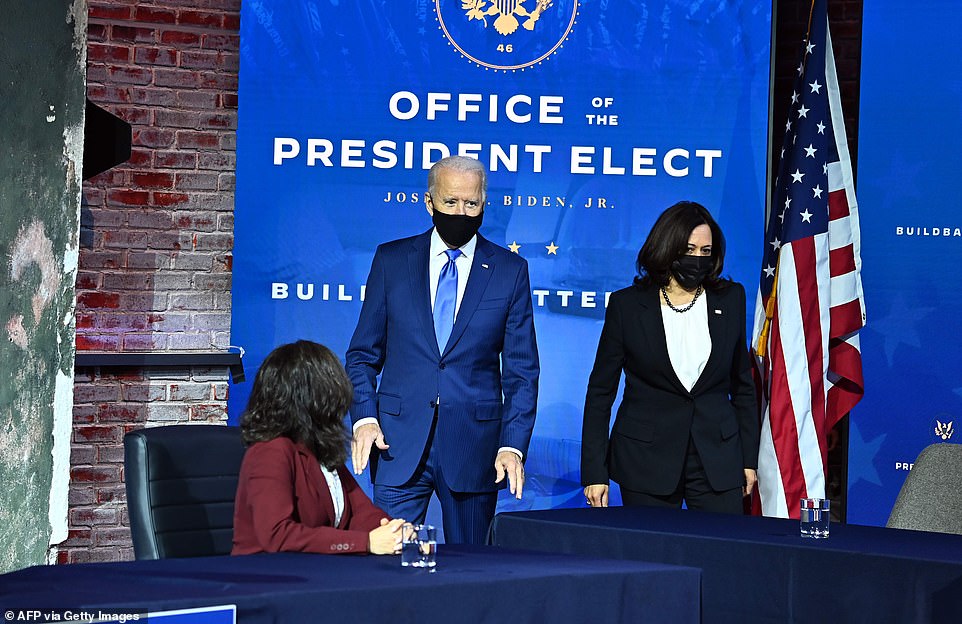 Walking gingerly: Biden came in to the Queen Theater with his vice-president elect, Kamala Harris 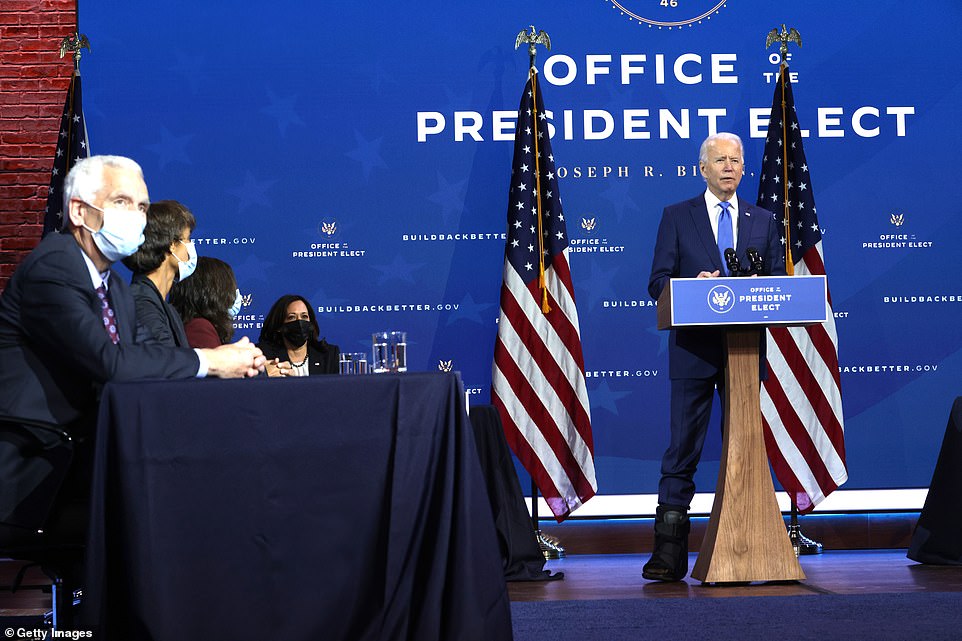 Standing appointment: Biden spoke from behind a lectern, but sat down afterwards

As Biden, who will likely be wearing a walking boot for several weeks, was getting ready to leave the doctor’s office, he was photographed by NBC News getting into a vehicle.

Initially, Dr Kevin O’Connor said Biden ‘sustained a sprain of his right foot’ and that there was ‘no obvious fracture’.

But a subsequent CT scan ‘confirmed hairline (small) fractures of President-elect Biden’s lateral and intermediate cuneiform bones, which are in the mid-foot,’ according to a statement from O’Connor.

‘It is anticipated that he will likely require a walking boot for several weeks,’ O’Conner added. 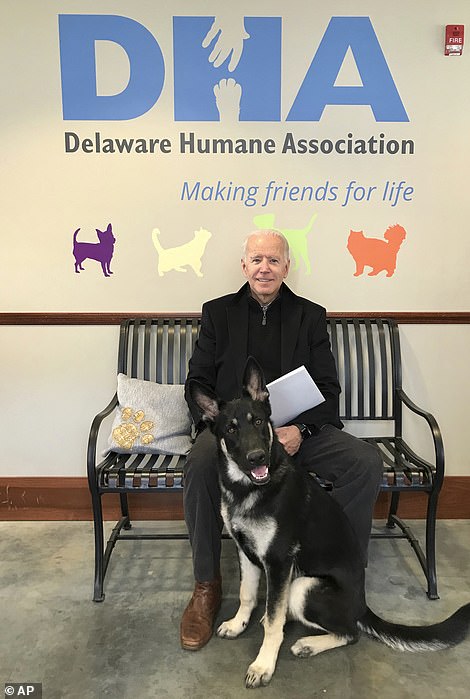 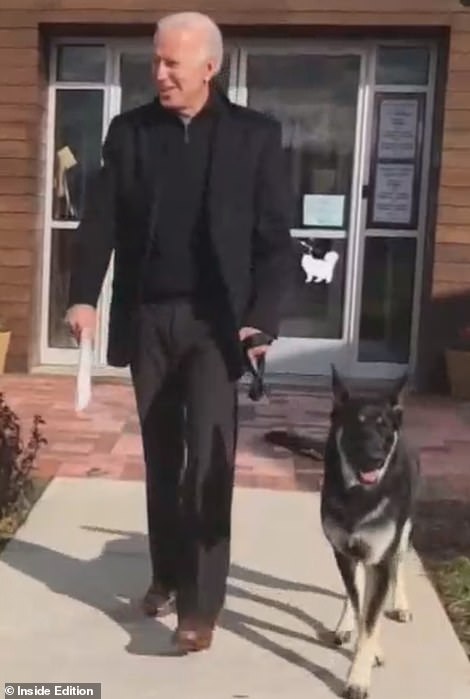 President-elect Joe Biden (left and right with Major in 2018) fractured his foot while playing with his dog Major and will require a walking boot for several weeks, according to his doctor 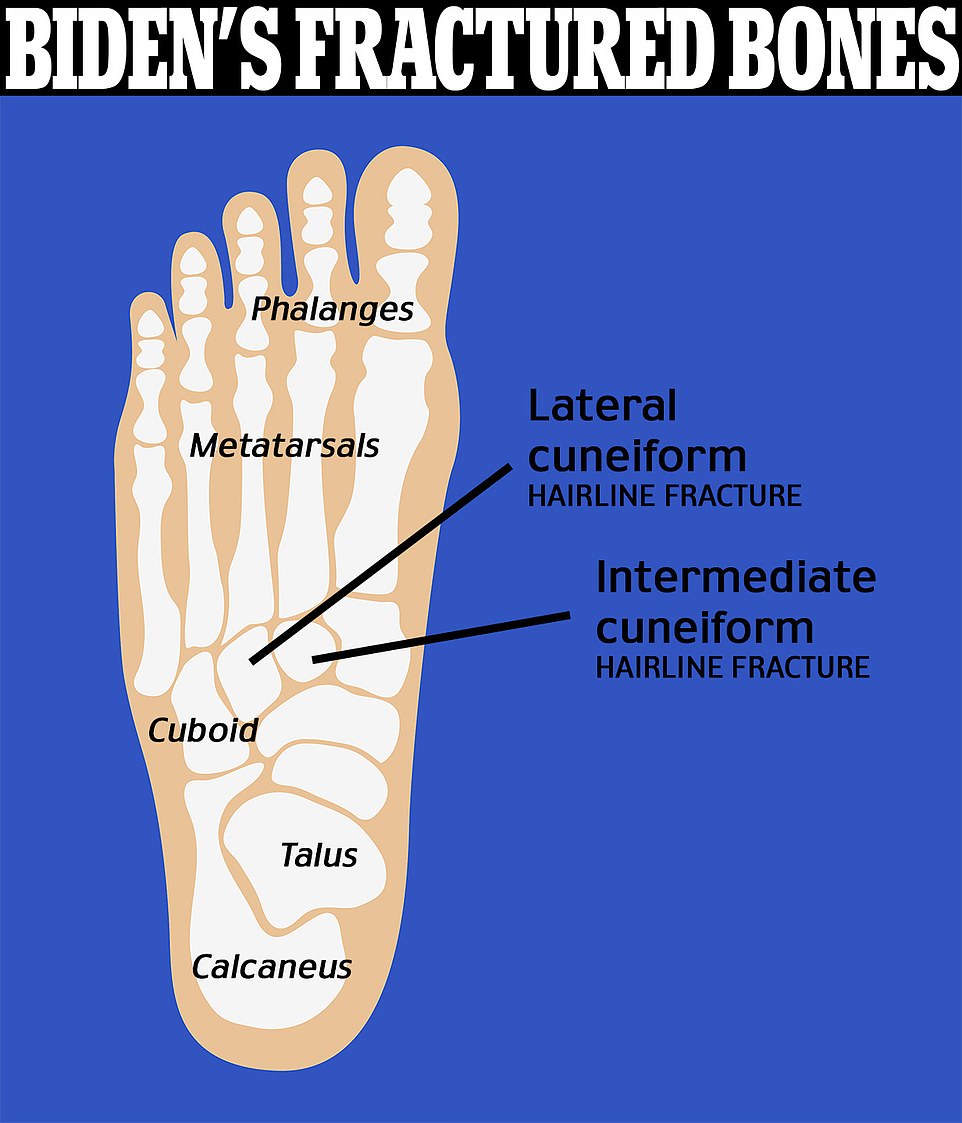 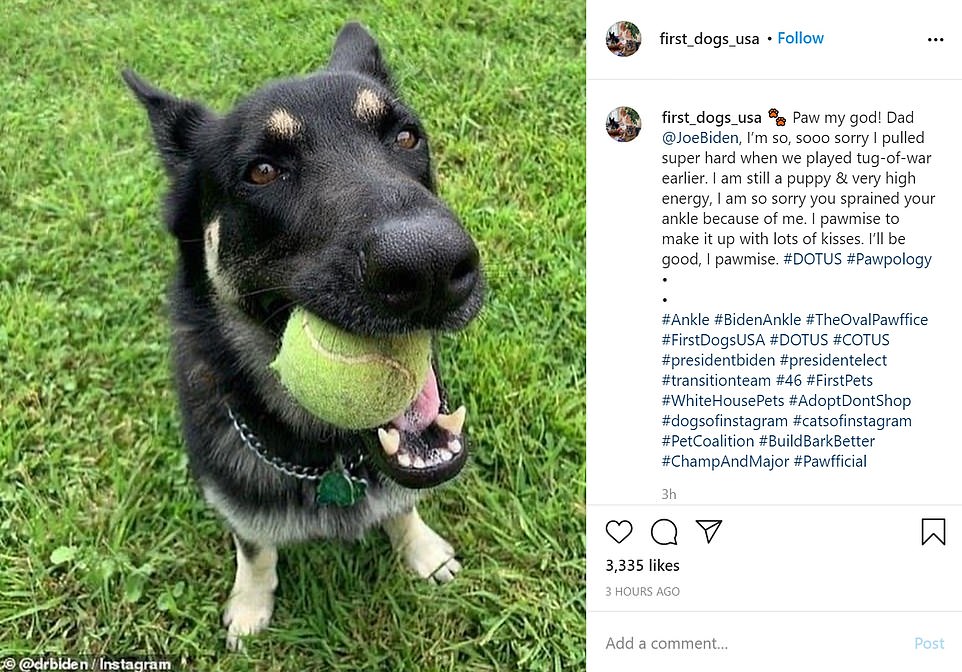 Shortly after Biden visited the doctor, the Instagram fan page for Biden’s dogs, @first_dogs_usa, shared an ‘apology’ from Major. ‘Paw my god! Dad @JoeBiden, I’m so, sooo sorry I pulled super hard when we played tug-of-war earlier,’ the post reads

Biden’s office said he was taken to the doctor ‘out of an abundance of caution’.

Fractures are a concern generally as people age, but Biden’s appears to be a relatively mild one based on his doctor’s statement and the planned treatment.

At 78 he will become the oldest president when he’s inaugurated in January; he often dismissed questions about his age during the campaign.

He released a doctor’s report in December that disclosed he takes a statin to keep his cholesterol at healthy levels, but his doctor described him as ‘healthy, vigorous’ and ‘fit to successfully execute the duties of the Presidency’.

Reporters covering the president-elect were not afforded the opportunity to see Biden enter the doctor’s office, despite multiple requests.

Secret Service agents were seen standing outside the office as a doctor had a look at Biden’s injury.

Biden was playing with Major, one of the Bidens’ two dogs, when he sprained his ankle.

The Bidens adopted Major in 2018, and acquired their first dog, Champ, after the 2008 election.

Biden officials have said Major will become the first rescue dog to live in the White House.

The Bidens have said they’ll be bringing their dogs to the White House and also plan to get a cat.

Biden, boot, OFF, shows, Surgical
You may also like: