Washington: The White House has acknowledged the United States will miss President Joe Biden’s goal for 70 per cent of American adults to have received at least one COVID-19 vaccine dose by the July 4 holiday.

When Biden announced the goal at the beginning of May the US appeared on track to reach the target, but the average daily vaccination rate has dropped significantly in subsequent weeks.

The acknowledgment from the Biden administration comes as health officials grow increasingly concerned about the increased spread of the new Delta variant in the US and its potential to cause another wave of infections when temperatures drop later in the year. 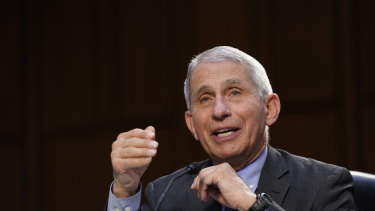 Anthony Fauci, director of the US National Institute of Allergy and Infectious Diseases, said he was concerned about the increased spread of the Delta variant in the United States. Credit:Susan Walsh/AP/Bloomberg

Sixty-five per cent of American adults have received at least one vaccine dose according to the Centres for Disease Control and Prevention, meaning the US is likely to reach a rate of around 67 per cent by Independence Day.

It will be the first COVID-19 goal that Biden has failed to reach, after the US easily achieved his initial goal of 100 million doses, and subsequent goal of 200 million doses, administered within his first 100 days in office.

Earlier this month, Biden designated June a “month of action” on vaccines, an effort that included the promise of free beer for vaccinated Americans if the nation met the July 4 goal.

Jeff Zients, the head of the White House COVID-19 task force, said at a briefing on Wednesday (AEST) that it would take a “few weeks” longer for the US to reach the 70 per cent target.

Zients said the main reason the US will miss Biden’s 70 per cent target was that not enough younger Americans aged between 18 and 30 have yet been vaccinated.

“We want every American in every community to be protected and free from fear of the virus,” Zients said.

“That’s why we’ll keep working to vaccinate more Americans across the summer and into the fall…we are not stopping at 70 per cent and we’re not stopping on July Fourth.”

He continued to stress the positive, saying that vaccinated Americans will be able to enjoy a “summer of joy, a summer of freedom”. 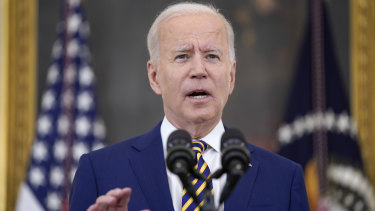 Earlier in the month Joe Biden had designated June a “national month of action” on vaccines. Credit:AP

“We are going to have a Fourth of July that is beyond everyone’s expectations,” he said, noting that COVID-19 cases and deaths in the US have plummeted since the start of the year.

In north-eastern states like Vermont around 85 per cent of the adult population is vaccinated; in southern states such as Mississippi less than 50 per cent of adults have been vaccinated.

At the White House briefing Anthony Fauci, Biden’s top medical adviser, said the nation could not rest on its laurels when it eventually hits the 70 per cent milestone.

“We are not done until we completely crush this outbreak,” he said.

Fauci said he was concerned that younger, un-vaccinated Americans were not protected against the new Delta variant which appears to lead to higher rates of severe illness and hospitalisation.

The Delta variant, which now dominates the United Kingdom, is believed to make up around 10 per cent of new cases in the US.

Biden, concedes, house, It, White
You may also like: