‘Could we BE any more overwhelmed with the response?’ Police say they’ve identified David Schwimmer lookalike suspect ‘caught stealing crate of beer from Blackpool restaurant’

Police have identified a criminal suspect who bears a striking resemblance to Friends star David Schwimmer which caused a major stir online.

Blackpool police posted a CCTV grab of a suspect leaving a restaurant carrying a crate of stolen beer cans. However, eagle-eyed social media users noticed the uncanny similarity between the man and the US TV star.

Such was the likeness, David Schwimmer filmed himself re-enacting the theft in a New York shop and posting the footage online. 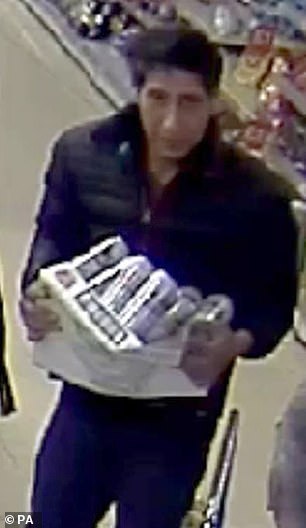 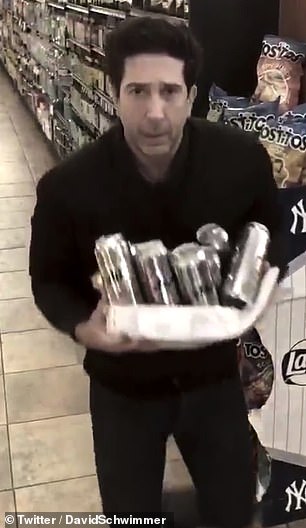 Blackpool Police were looking for help to find a suspected thief (left) when thousands of people responded to a Facebook appeal pointing out the man’s likeness to the 51-year-old actor, who then did his own spoof video from New York (right)

‘Officers, I swear it wasn’t me. As you can see, I was in New York. To the hardworking Blackpool Police, good luck with the investigation,’ posted the actor, who plays Ross in Friends

Today, Blackpool Police provided an update on the investigation: ‘Could we BE any more overwhelmed with the response to our CCTV appeal after a theft at a restaurant in Blackpool?

‘Most importantly, we’re now satisfied we’ve identified the man in the still & our enquiries are very much continuing.

‘Huge thanks for sharing it with your Friends.’

In yesterday’s hilarious spoof, Schwimmer wrote: ‘Officers, I swear it wasn’t me. As you can see, I was in New York. To the hardworking Blackpool Police, good luck with the investigation.’

Blackpool Police were looking for help to find a suspected thief when thousands of people responded to a Facebook appeal pointing out the man’s likeness to the 51-year-old actor.

The alleged theft happened on September 20, a post by Blackpool police said.

The image features a man with dark bushy hair, holding a pack of beer, staring up at the camera.

The original post read: ‘Do you recognise this man? We want to speak to him in relation to a theft at a Blackpool restaurant on the 20th September.’

However, Facebook users were quick to point out the similarities with the US actor.

One person quoted the famous theme tune by the Rembrandts: ‘So no-one told me life was going to be this wayyyy.’

Another said: ‘I heard his getaway driver was stuck in second gear…’ 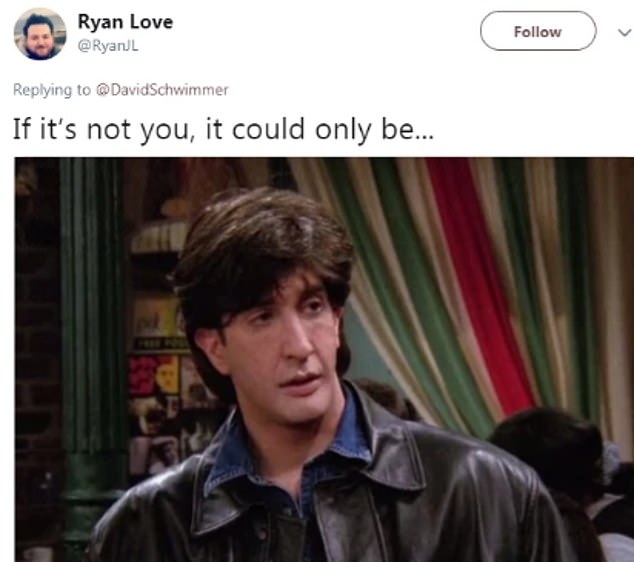 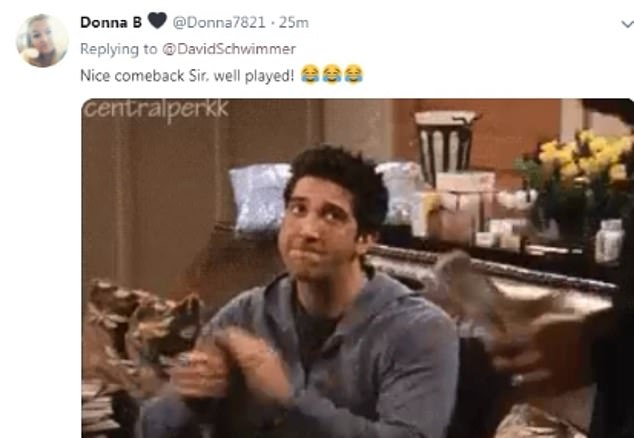 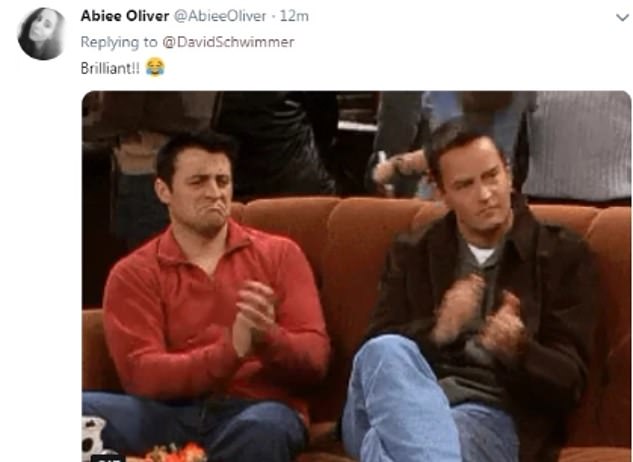 Nick Croston said: ‘I don’t think it’s been this guy’s day, his week, his month or even his year….’

Scottish police also got in on the act, with officers in Dumfries and Galloway also sharing the post and warning members of the public to ‘keep away’ from the suspect. 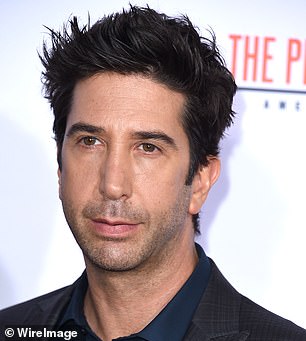 ‘He is known to have studied karate and we believe he has mastered the art of Unagi, the state of total awareness,’ they said, in a reference to one episode of the sitcom where Ross claims to be an expert in self-defence

‘He is known to have studied Karate and we believe he has mastered the art of Unagi, the state of total awareness.’

Another user said: ‘So no one told you life was gonna be this way; Your job’s a joke, you’re broke; Your love life’s DOA; It’s like you’re always stuck in second gear; And before you know it you’re in SPAR stealing some beer.’

Even the police joined in on the joke.

‘Thank you to everyone for your speedy responses. We have investigated this matter thoroughly and have confirmed that David Schwimmer was in America on this date. We’re so sorry it has to be this way.’ 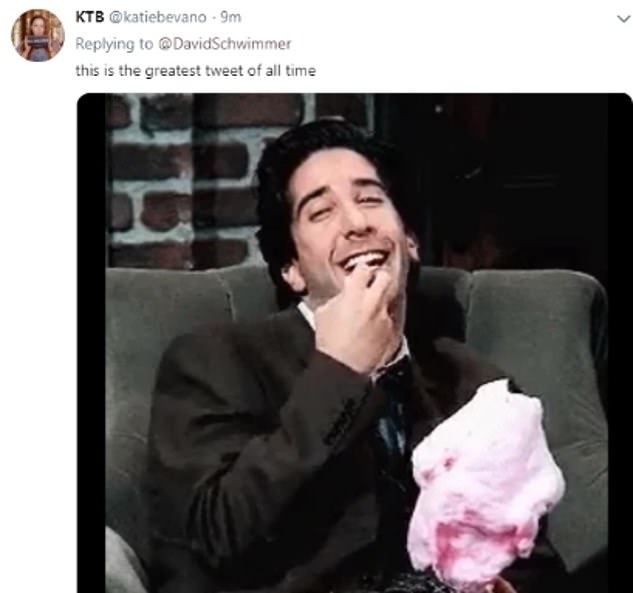 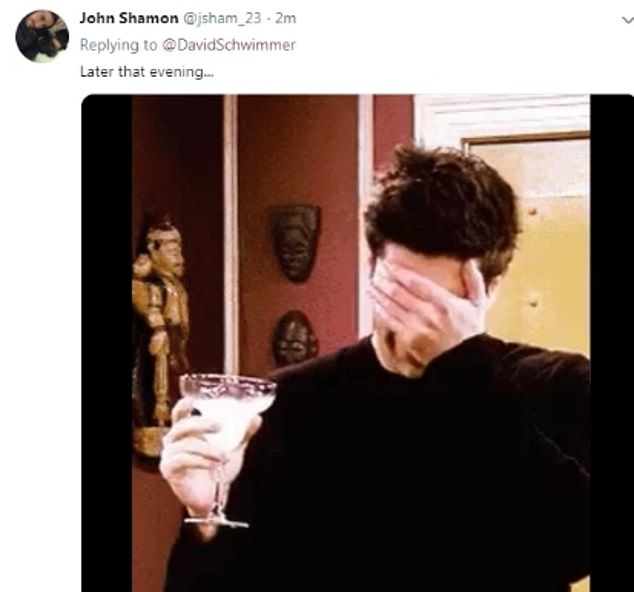 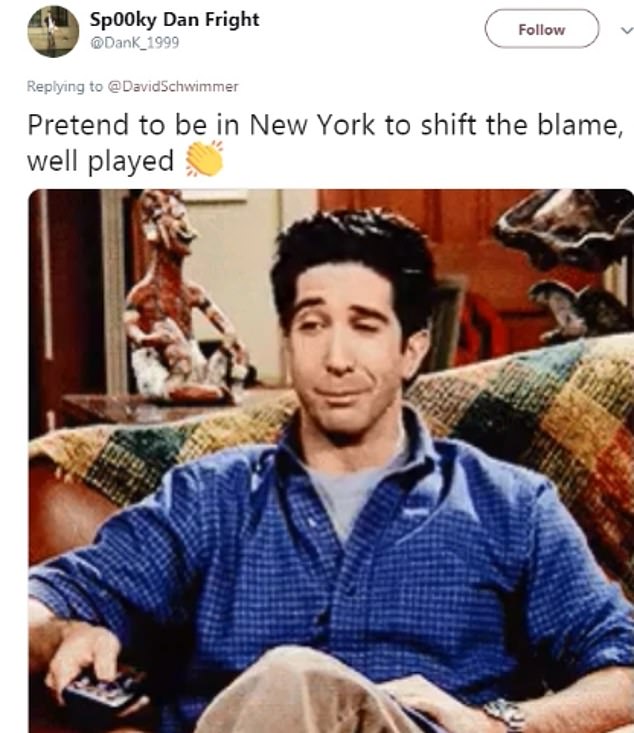 One Twitter user said Schwimmer’s response to the appeal was ‘the greatest tweet of all time’ while another joked, ‘Pretend to be in New York to shift the blame, well played’