London: British Prime Minister Boris Johnson has tested positive for coronavirus and has been forced into isolation during the worsening emergency in the United Kingdom.

In a video posted to Twitter, Johnson, aged 55, said he had developed mild symptoms and was tested inside Downing Street by National Health Service staff on the advice of the country's chief medical officer. 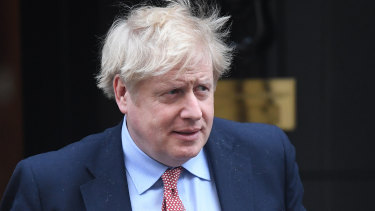 He vowed to continue leading Britain's response to the pandemic via teleconferencing, however the diagnosis will raise questions about the Prime Minister's contact over recent weeks with other key officials and cabinet ministers.

"I am working from home, I'm self-isolating and that's entirely the right thing to do but be in no doubt that I can continue, thanks to the wizardry of modern technology, to communicate with my top team to lead the fightback against coronavirus," he said.

Health Secretary Matt Hancock, who is responsible for ensuring the NHS can handle the expected influx of patients, has also tested positive and is self-isolating from home.

Johnson last appeared in public on Thursday night, when he stepped outside Downing Street to join in a national applause for National Health Service workers. The day before, he appeared at a press conference alongside chief medical officer Chris Whitty and chief scientific officer Sir Patrick Vallance – the two key figures advising the Prime Minister on how to battle the pandemic.

Britain's chancellor Rishi Sunak has also been working closely with Johnson but has not developed any symptoms so has not been tested.

Johnson is the first world leader to contract the virus. Prince Charles also tested positive earlier this week and is self-isolating in Scotland. Clarence House said the 71-year-old heir to the throne had mild symptoms and was in otherwise good health. His wife, Camilla the Duchess of Cornwall, tested negative.

Buckingham Palace said the Queen's last face-to-face weekly meeting with Johnson was on March 11 and stressed she was in "good health". The Queen last met Prince Charles on March 12.

Johnson's fiancee, Carrie Symonds, is pregnant with the couple's first child and is due to give birth in the summer. Pregnant women are in the government's official "at risk" category and have been advised to self-isolate for 12 weeks.

Westminster has been a hotspot for COVID-19 over recent weeks. At least two government ministers have had the virus and Neil Ferguson, an Imperial College London expert who has been advising Johnson and his team, also self-isolated after coming down with symptoms.

Johnson has been conducting daily press conferences in Downing Street for nearly two weeks. Downing Street only recently introduced new measures to increase the physical distance between the Prime Minister, his advisers and the press during the daily appearances.

He also appeared in the House of Commons for an hour on Wednesday for Prime Minister's Questions.

In his video, Johnson again urged the public to comply with a strict nationwide lockdown to limit the spread of the virus.

"The more effectively we all comply with those measures, the faster our country will get through the epidemic and the faster we will bounce back," he said.

Nearly 580 people have died during the coronavirus pandemic in the United Kingdom. There are 11,658 confirmed cases however Johnson's advisers have previously said the true number of cases is probably in the hundreds of thousands.

The death toll has risen from 475 to 578, health officials have confirmed.

In a tweet, Australian Prime Minister Scott Morrison wished Johnson well: "Take care Boris Johnson from all of us over here in Oz. Thinking of you and all our UK friends as we work together to get through this."

Boris, F---, Johnson, positive, tests
You may also like: