Guilt-stricken mother killed herself after hearing son, 8, shout ‘Mum’ as he died in fire that was started by Halloween tea lights as she dozed on sofa after drinking wine 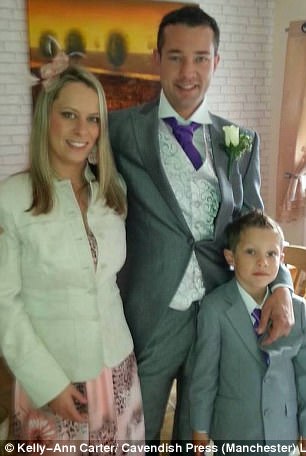 Kelly-Ann Carter with her son Lucas and partner Andy Hough

An eight-year-old boy died after a severe fire caused by a pumpkin candle swept through his home, an inquest found.

Lucas Carter was asleep upstairs when the flicker from two tealights inside the Halloween lantern caught the living room curtains on October 30, 2016.

With minutes, the flames engulfed the whole lounge and then spread to the hall of the house in Platt Avenue in Sandbach, Cheshire.

His mother Kelly Carter, 35, was so distraught she killed herself just two weeks later because she couldn’t forgive herself for being unable to save him.

A separate inquest into her suicide last year heard she drank brandy then hanged herself at the home of boyfriend Andrew Hough whilst he was asleep in bed.

‘She couldn’t forgive herself and didn’t want to be here without him. He was her world, he was her best,’ her best friend Sarah Blakey told the inquest.

‘To her he was her greatest achievement and he was an absolute credit, a lovely little boy.’ 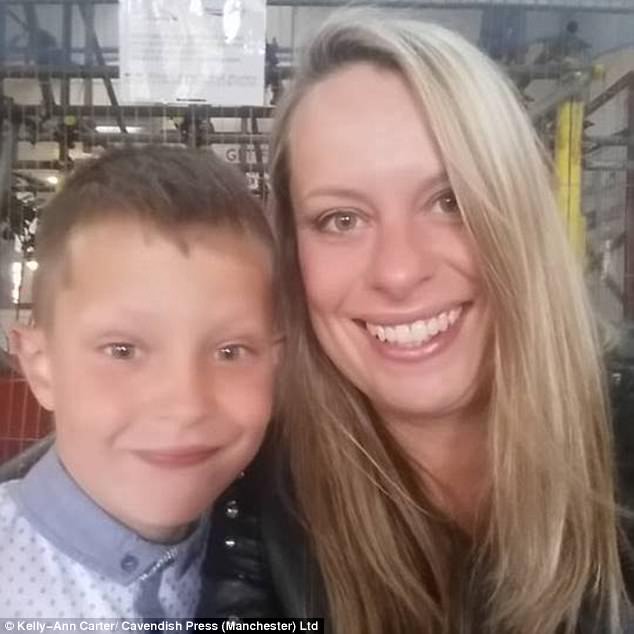 Kelly Carter, 35, from Cheshire, attempted to rescue son Lucas when when the deadly blaze broke out at their family home – but she was beaten back by the force of the flames 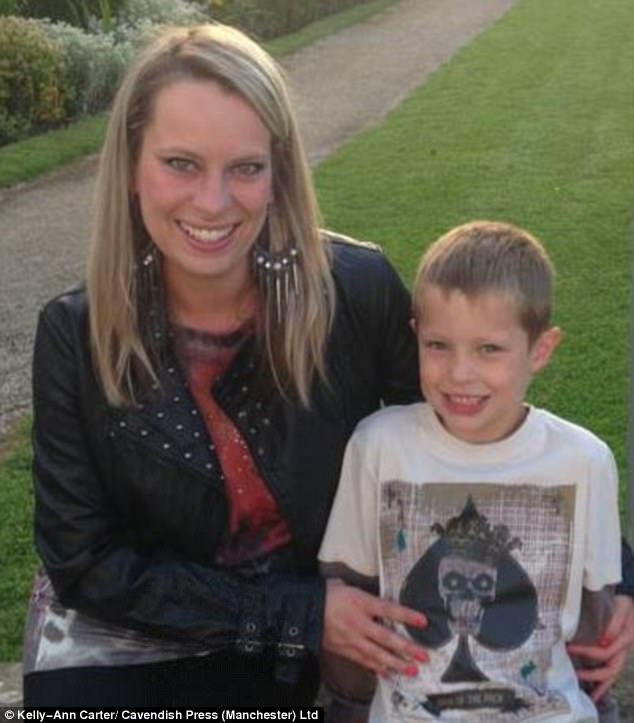 Just two weeks later, whilst in a state of anger at being being unable to save her child whom she called ‘her world and her best’, Miss Carter drank brandy then hanged herself at the home of boyfriend Andrew Hough whilst he was asleep in bed

On the night of the fire, Lucas watched a scary Halloween film with his mother before going to bed, an inquest in Crewe heard on Friday.

She then dozed off on the couch after drinking some wine and lighting the candles, awaking to find the bay window curtains ‘orange’ with flames.

The fire was so severe Kelly was beaten back as she tried to rescue Lucas from his bedroom upstairs, where a passerby heard him cry ‘mum’ before he succumbed to the smoke.

The Offley Primary pupil was rushed to Leighton Hospital but he suffered a cardiac arrest and died. The cause of death was determined to be smoke inhalation.

The inquest heard that the distraught mother told police on the night of the fire: ‘If you can do anything again, don’t light candles.’

Barman Daniel Gall had just finished his shift at the Tavern pub when he heard an alarm and spotted the fire on his way home. 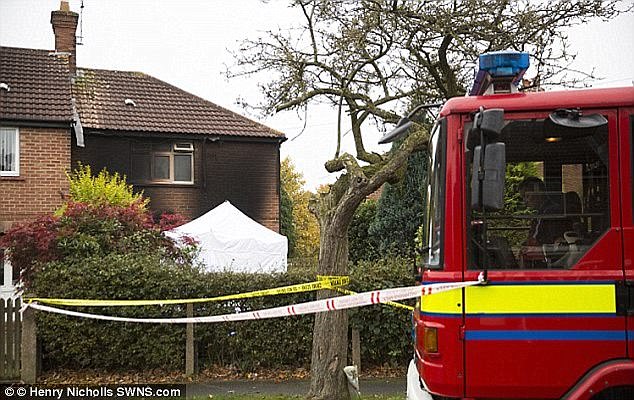 The fire was caused by a lit pumpkin and soon swept through the home, an inquest found 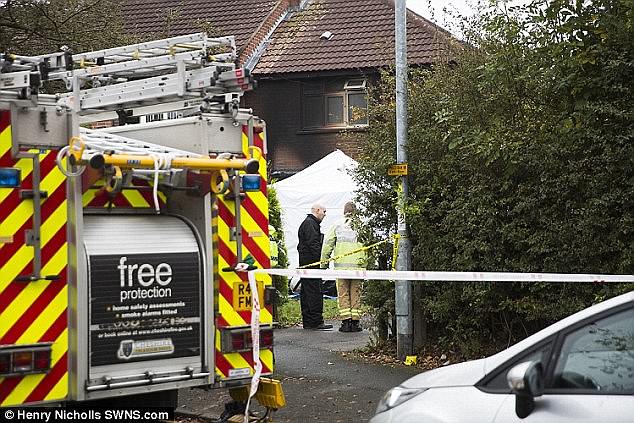 He said he saw Kelly screaming outside the property. ‘She was saying, ‘could you get him out of there’.

‘She had burns on both arms and her face was black with soot.’

Daniel tried the doors, but the fire was too intense to get inside, so and another neighbour put a ladder against the wall. 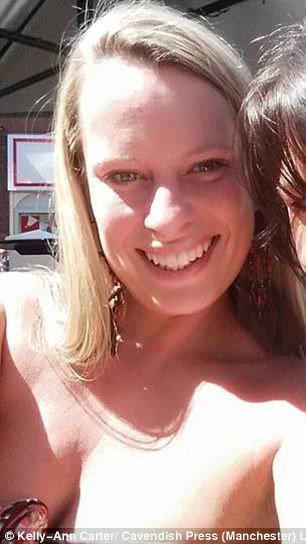 Ms Carter’s inquest heard in November that she told her best friend she would ‘do the same as your mother’ who also committed suicide, but not until after Lucas’ funeral

They had just smashed a side window when fire crews arrived. Lucas was carried outside and firefighters began CPR on the front lawn.

Fire investigation officer Ian Pugh told today’s hearing that the balance of probabilities was the the lit pumpkin started the blaze.

Concluding it was an accidental death, Cheshire coroner Claire Welch said her ‘heart went out’ to Lucas and Kelly’s family for their double loss.

‘This was nothing more than a truly horrific accident. It is perhaps a salutary reminder of the dangers of using naked flames in the home,’ she said.

Ms Carter’s inquest heard in November that she told Ms Blakey she would ‘do the same as your mother’ who also committed suicide, but not until after Lucas’ funeral.

She said she tried to take a dressing gown cord with knots tied in from Ms Carter, on the night before her death, but she wouldn’t let her.

‘Lucas was buried on November 18 and Kelly’s funeral was the following Friday,’ she said.

Mr Hough, 33, said he left her downstairs watching TV and came downstairs at 5am to wake her up from the couch and get her to come to bed. 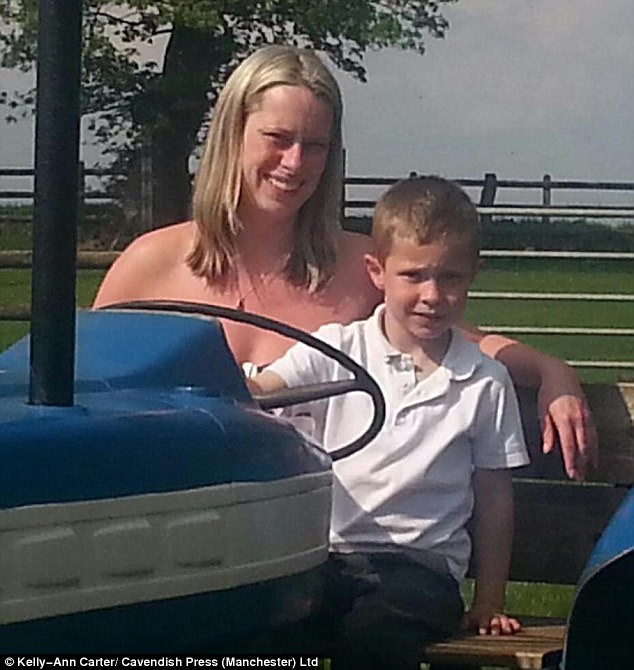 She said she tried to take a dressing gown cord with knots tied in from Ms Carter, on the night before her death, but she wouldn’t let her 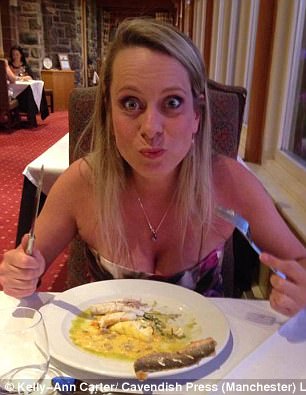 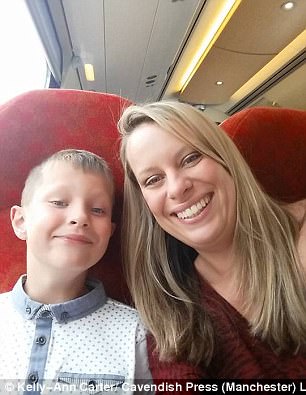 ‘At 9:36am I went downstairs and as I got to the bottom step I saw Kelly. I phoned my mum and Kelly’s sister Gemma,’ he said.

Police agreed with their version of events: ‘[Mr Hough] had come down in the morning to find her hanged against the bannister of the staircase.

‘The overall view was that we didn’t believe there was any suspicious circumstances or third party involvement because of the fact that she lost a loved one earlier on and it was too much for her.’