London: Britain and the European Union have given themselves three days to salvage negotiations for a crucial post-Brexit trade deal which would soften the economic impact of their divorce and avert huge border disruptions from January 1.

The UK formally left the EU on January 31 this year but remains within the bloc's single market and customs union during a "transition period" that ends on December 31. Both sides are now scrambling to thrash out a free trade deal to come into force once the transition period ends. 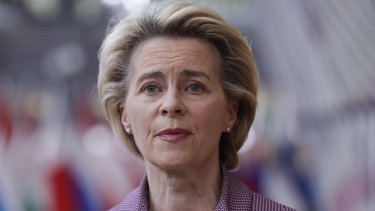 The Vote Leave campaign repeatedly promised voters in the 2016 Brexit referendum that the UK would be able to quickly and easily strike a new trade deal with the EU.

Jim Harris, the chief executive of Britain's Revenue and Customs service, on Monday said filling out customs paperwork would cost UK businesses an £7.5 billion ($13.5 billion) each year even if a deal is reached.

Authorities expect the number of customs declarations made in the UK each year to rise from 54 million to 265 million.

In a joint statement on Monday night, Johnson and von der Leyen said: "We agreed that the conditions for finalising an agreement are not there due to the remaining significant differences on three critical issues.

"We asked our chief negotiators and their teams to prepare an overview of the remaining differences to be discussed in a physical meeting in Brussels in the coming days."

Negotiators are stuck on three key issues. The two most easily resolved are the level of access EU fishing fleets should have to British waters and the terms of how a new deal is governed in case of breaches from either side.

The biggest sticking point is the so-called level playing field – the term used for whether the UK should abide by certain EU rules so that British businesses are not able to gain a competitive advantage over European ones, potentially via state aid.

Irish Foreign Minister Simon Coveney told reporters that political leaders around Europe were "increasingly frustrated and increasingly resigned" to the possibility of no deal.

"In Brussels certainly the mood is starting to shift to contingency planning for a no deal, as opposed to the compromises that are necessary to get a deal done," he said. "That is not where we want this to go."

A Downing Street spokesman on Monday conceded an "Australian-style" deal with the EU really meant no deal.

"As a matter of fact, Australia does not have a comprehensive free trade agreement with the EU," he said.

"So the bulk of their trade is done according to WTO terms. So, Australia terms would mean that the UK would trade with the EU under WTO terms, based on the principles of free trade."

And, Britain, Europe, FI, for, head
You may also like: