Follow
Home » World News » Britain back on the boil! Storm Leslie could spark a ‘second SUMMER’

Britain back on the boil! Storm Leslie could spark a ‘second SUMMER’

Heavens open! Britons break out the brollies as rain sweeps the south… but Storm Leslie will bathe Britain in second summer with 70F heat next week

Britons will be basking in unseasonably high temperatures upwards of 68F (20C) next weekend as a ‘second summer’ could be ushered in by incoming Storm Leslie.

Temperatures are expected to rise as the tropical storm, currently hovering near North East Bermuda, moves eastwards from the US – narrowly avoiding the UK.

The humidity, partially triggered by a string of depressions from Storm Leslie, will increase temperatures in the UK, with the mercury rising to over 20C by Wednesday next week. 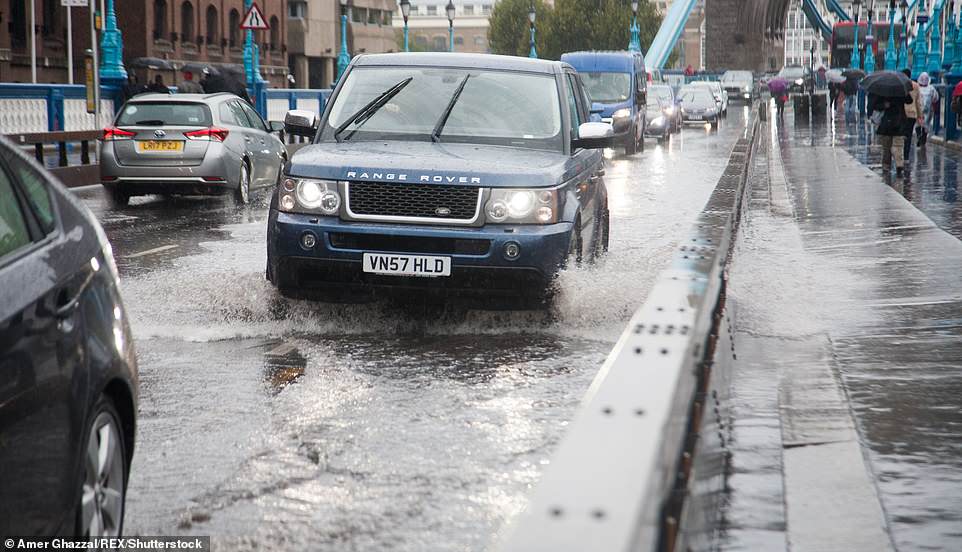 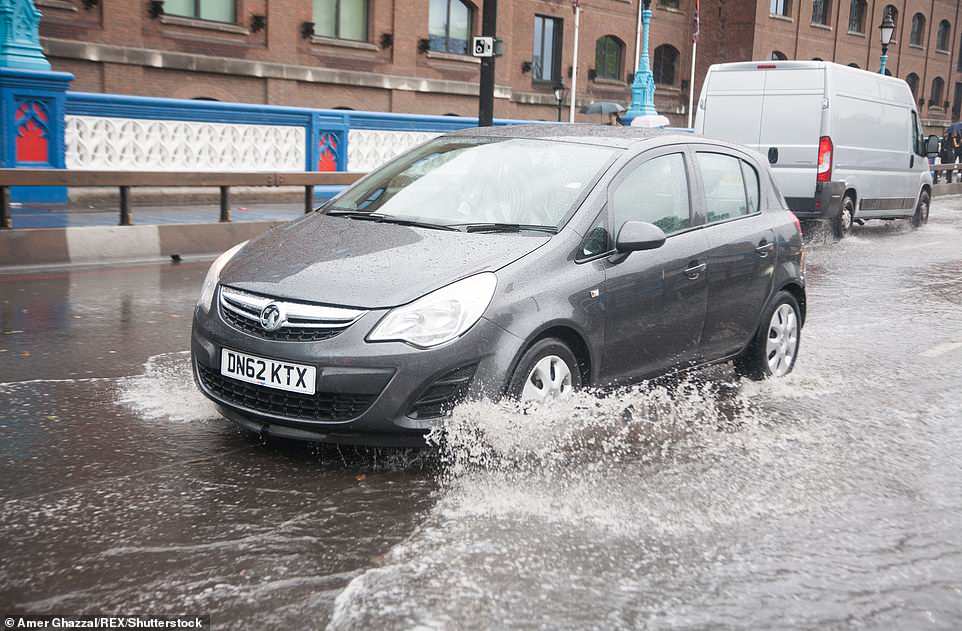 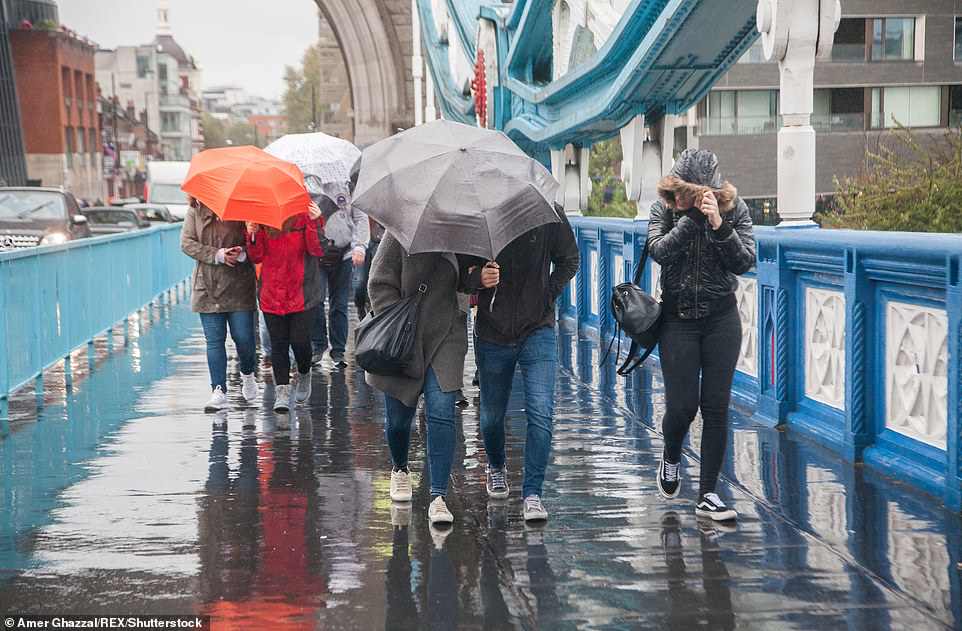 Thursday and Friday feel more like a midsummer’s afternoon, with highs in the mid-20s – around 5C higher than the average for this time of the year.

However Britons will have to wait for the hot temperatures as rain is forecast across much of the South West of England, through into the Midlands and parts of the South East today.

Wet weather is expected to push southeastwards today, helped along by a strong northeasterly winds that will lead to a notably colder day across much of England and Wales. 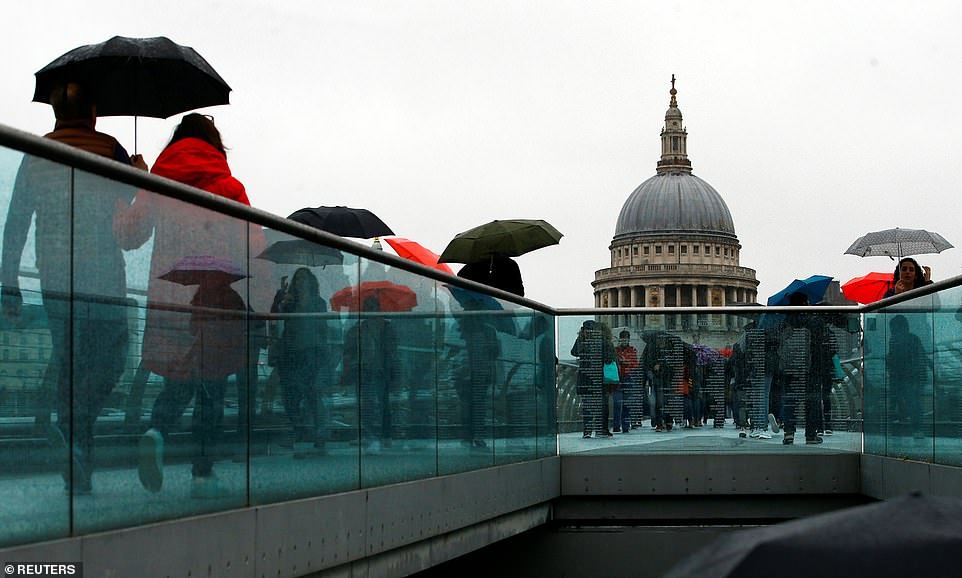 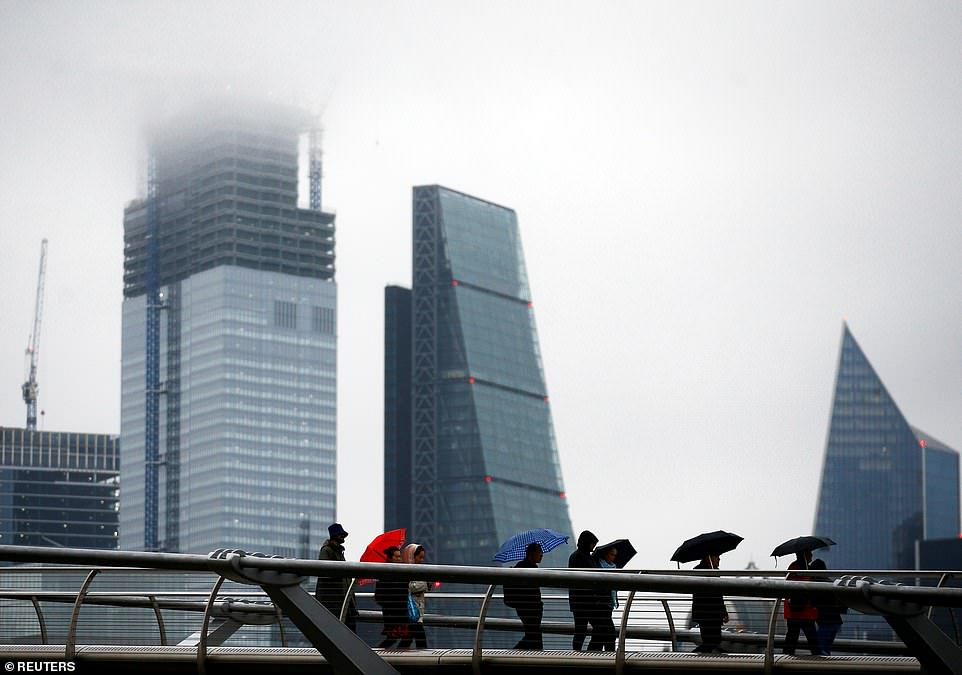 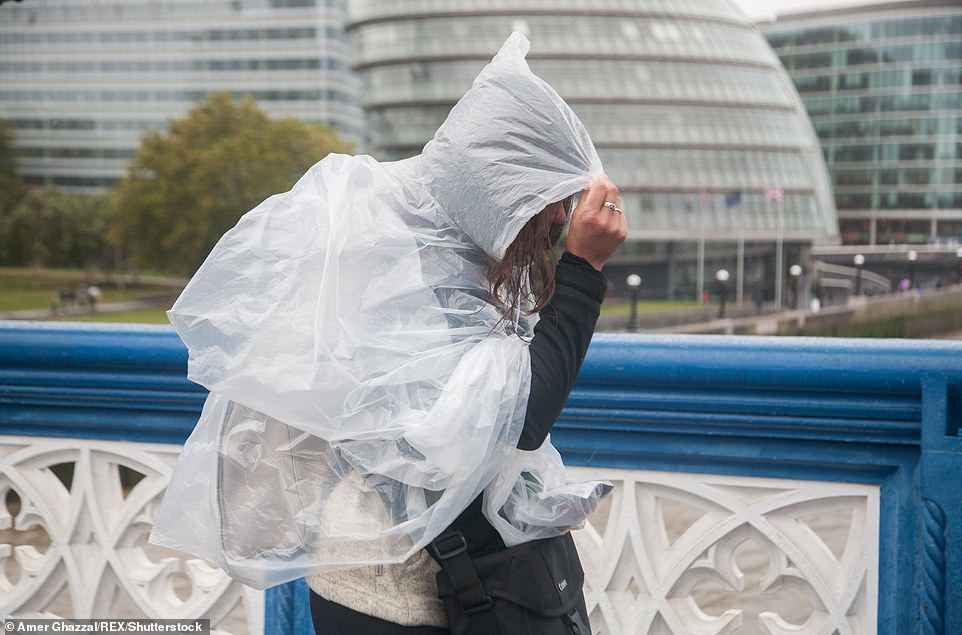 Highs of 15C have been forecast in Dover, while Birmingham, Dumfries and Aberdeen will see lows of 7C.

Sunshine and a few showers will wash over Scotland and Northern Ireland and will extend into northern England later.

Heading into the evening, a cold and clear night is expected for most with widespread frost and isolated mist and fog patches. The northwest will be windier with some rain forecast.

Heavy rain and gales moving east across Scotland and Northern Ireland. Drier with sunny spells elsewhere, but remaining rather chilly for all.

The weekend ahead is set to be a massive contrast between the North and South of the UK, as temperatures in the south plunge. 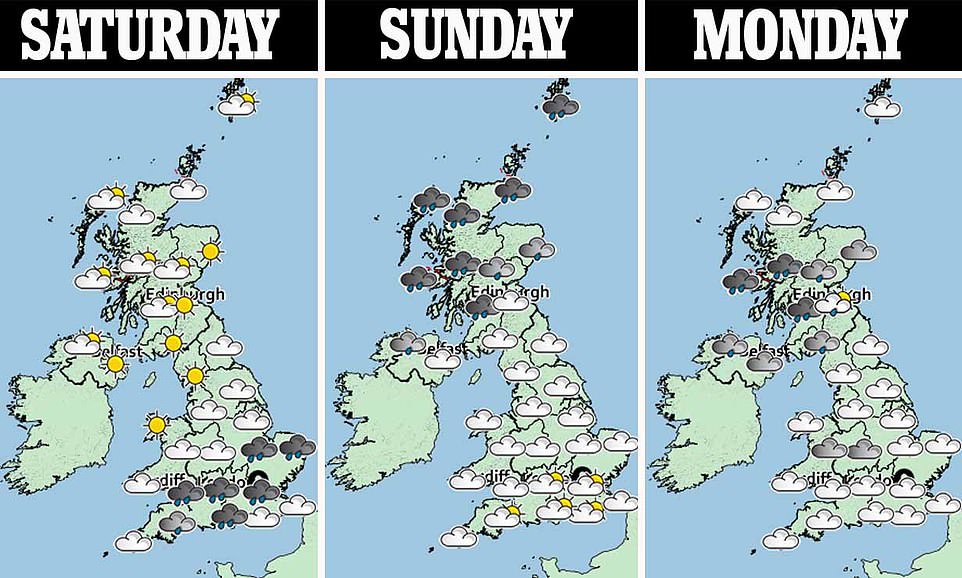 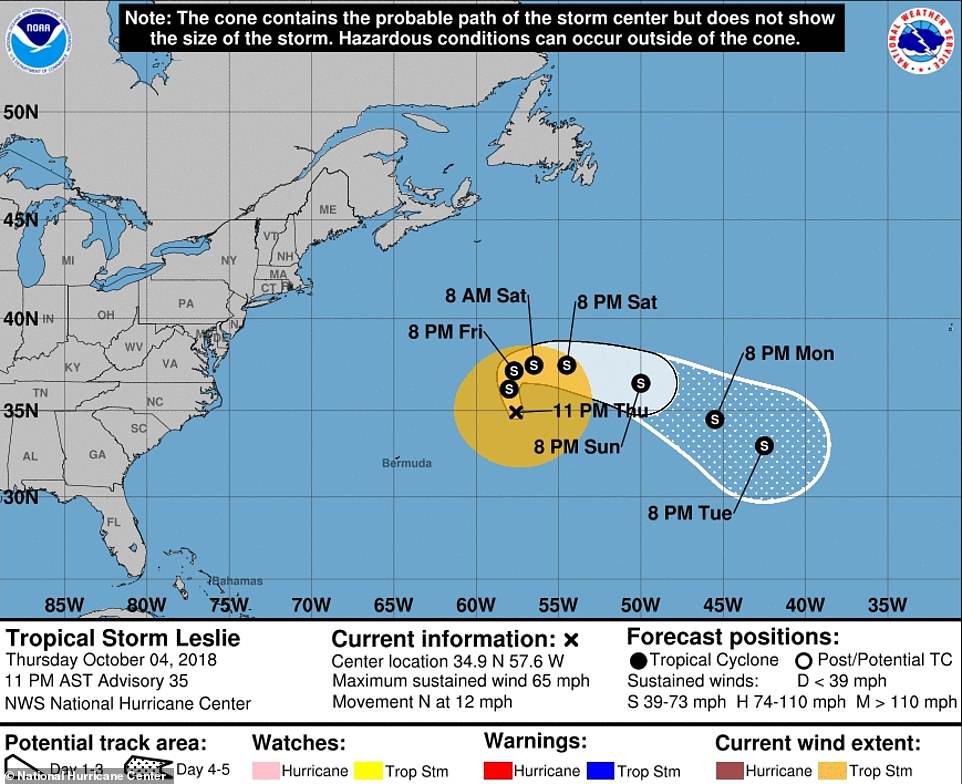 The projected track of Hurricane Leslie, which is currently battering the southern United States with 80mph winds, is shown 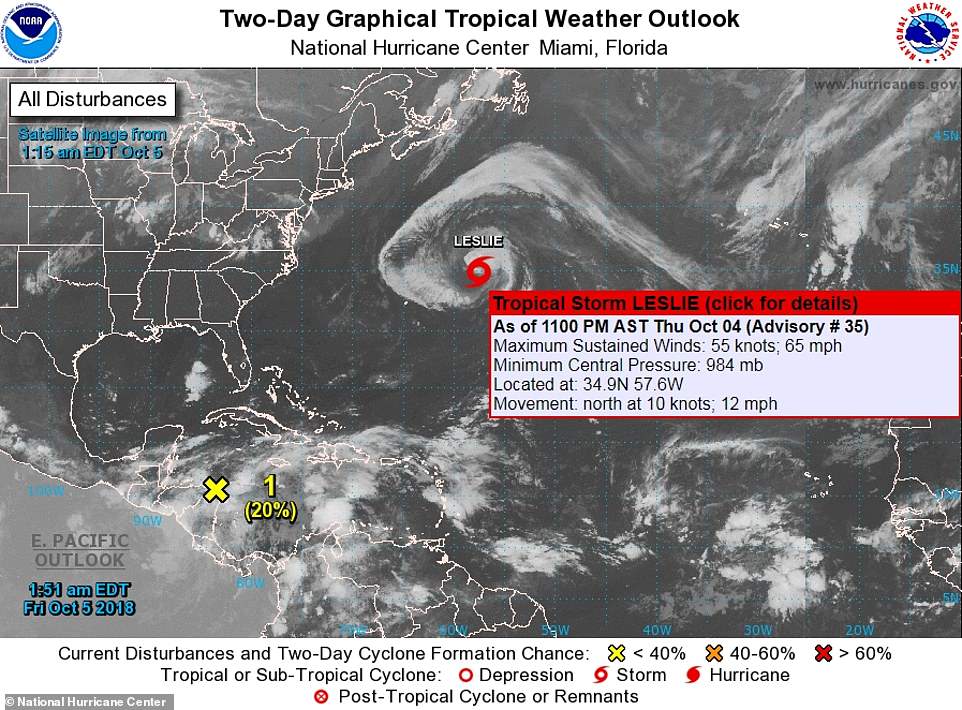 It is moving into the Atlantic and is not expected to travel towards Britain, but the tropical air will be picked up in jet streams

Met Office Forecaster Steven Keates said: ‘All of us, particularly in the South, will feel the change, which will be a shock to the system.

‘The rain from the North of the UK will start pushing south east, with downpours reaching Wales by the morning, and East Anglia and South East England by lunchtime.

‘The heavy, persistent showers will make for a miserable weekend for southerners, as a strong North easterly wind combined with rain and a lack of sunshine will make it feel markedly cold.

‘Temperatures will struggle to reach 13C.’

But he describes a much more pleasant picture up North, adding: ‘Northern England, Scotland, Wales and Northern Ireland will have a much brighter day, with sunny skies making for a nice but cold afternoon.

‘Temperatures will reach around 12C, and the lighter winds will make it a nice typical autumn day.’

The coming week will start off chilly on Monday, with temperatures ranging from 14C to 16C across the UK. 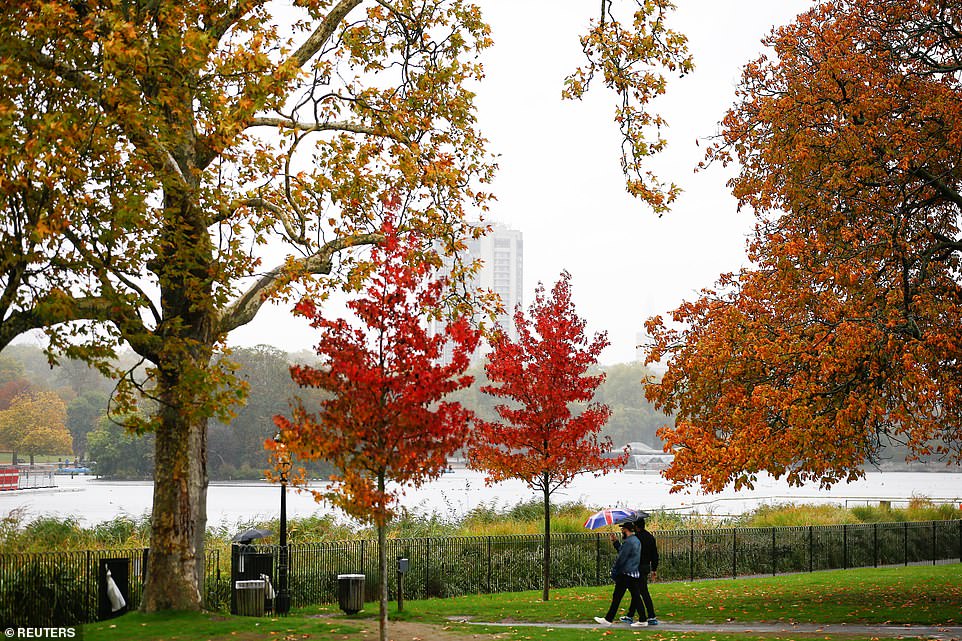 Luckily for these pedestrians, the showery weather is expected to be replaced by some autumnal sunshine early next week 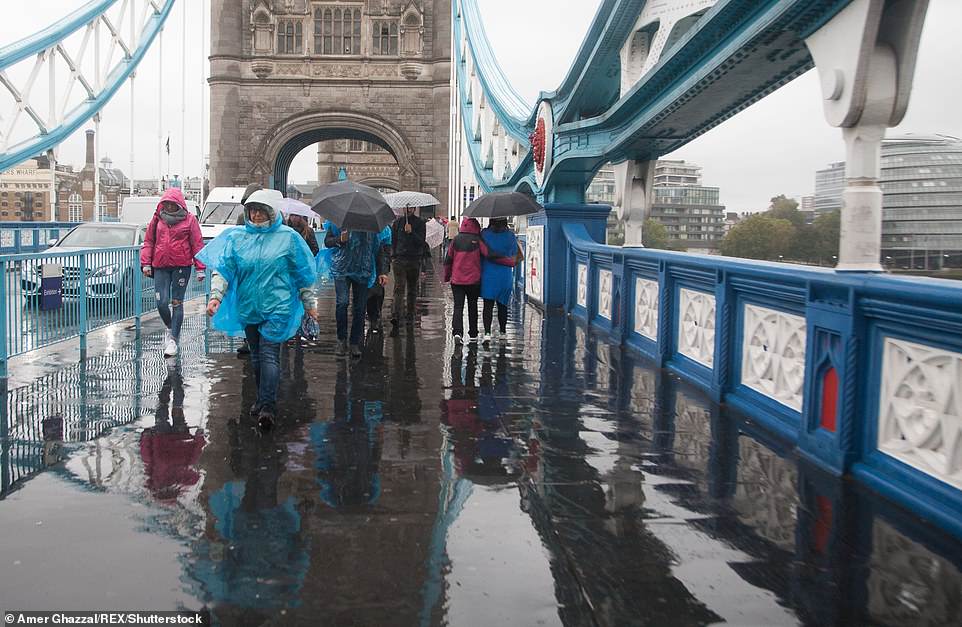 There will be outbreaks of blustery rain in northern parts of the UK, particularly heavy and continuous in northwest Scotland. Winds will be strong, reaching gale force in coastal and uplands areas. Southern parts will be mainly dry with light patchy cloud and sunny spells. A mainly gentle breeze.

Tomorrow night, strong winds and rain will continue in northern parts of the UK, though easing through the night in northern Scotland. Turning rather windy across central parts of the UK, with rain moving in to northern England and a spot of drizzle in Wales. A mainly dry night in the south with light cloud around.

On Monday and Tuesday wet and windy weather will continue in the north tomorrow. Dry in north Scotland at first, but rain moving in later. Rather cloudy in southwest England and Wales, though mainly dry. Sunny spells in the east. Rain on Tuesday across Scotland and Northern Ireland. Mainly dry with sunshine elsewhere.

boil, Britain, goes, Leslie, storm
You may also like: