The relentless spring sunshine will bring Britain’s hottest day of the year so far with temperatures expected to hit 84F (29C) before giving way to rain and thunder.

May was the sunniest month in the UK since records began, but the country is now facing a gloomy start to the summer – just as the coronavirus lockdown is being eased and people can hold barbecues in their garden.

Daytime temperatures are set to plunge to 43F (6C) this week, with some areas of the UK as cold as Greenland. However, wet weather will bring relief to water companies and parched gardens amid fears over hosepipe bans.

The last day of the warm sunshine is expected today, with western England and North Wales set to be hottest, with a possible high of 84F (29C) beating the current 2019 record of 82.7F (28.2C) set in Suffolk on May 20.

Maximum temperatures of 77F (25C) are expected widely across the rest of England and Wales today – the same as the conditions forecast in Ibiza – apart from coastal areas, where 68F (20C) to 70F (21C) is expected. 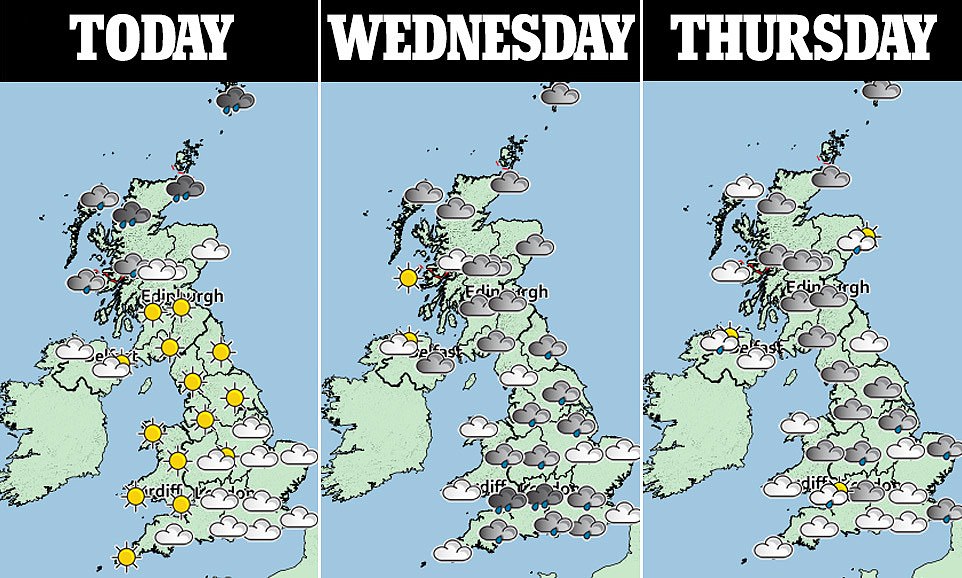 Then tomorrow, showers and thunderstorms could bring between half an inch and an inch of rain to the South West and South Wales. Patchy light rain is expected further north.

By Thursday, which is set to be mostly cloudy with some showers, just 59F (15C) to 61F (16C) is likely in most areas of England and Wales.

Parts of northern England could be colder still with 43F (6C) forecast in the central Pennines. Nuuk, the capital of Greenland, is set to reach 52F (11C).

Met Office forecaster Nicola Maxey said better conditions are likely towards the weekend. For Friday, she said: ‘There is potential for dry weather with sunny spells, although it is likely to be breezy with the chance of a shower.’

Saturday is set to be slightly cooler while Sunday is expected to be ‘rather cold’ and cloudy. Miss Maxey said the second half of June should turn warmer again, particularly in the South.

A record average of 626 hours of bright sunshine were counted over March, April and May this year, beating the previous record of 555 hours in 1948. 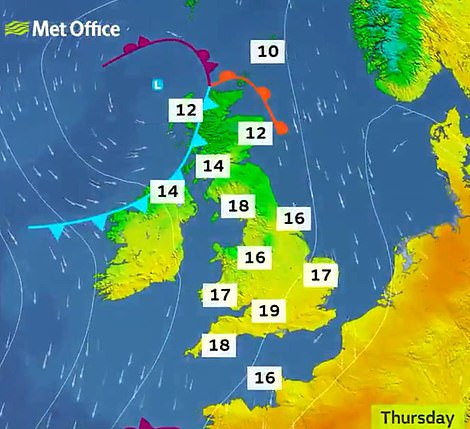 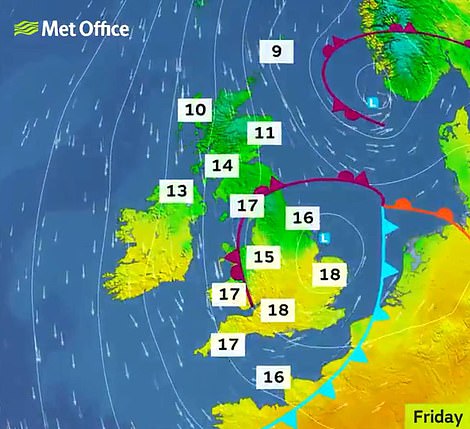 The chances of a hosepipe ban across the UK this summer have been already rated as odds-on by bookmakers, with Northern Ireland warning of a possible ban.

Sunniest May on record: How last month was a record breaker for the UK

May has been exceptionally dry and sunny with the month becoming the sunniest the UK has seen since records began, the Met Office said.

England has seen its driest May on record and Wales its second driest in records stretching back to 1862, with just 17% of average rainfall for the month for both countries.

The UK has also experienced its sunniest spring in records stretching back to 1929, with 626 hours of bright sunshine – beating the previous high of 555 hours in 1948 by more than 70 hours.

And May 2020 has been the sunniest calendar month on record with 266 hours of sunshine, beating the previous record of 265 hours in June 1957, the Met Office said.

Overall it has been the fifth driest spring for the UK and the eighth warmest.

It is a dramatic shift from the winter with its record wet February, and the Met Office said it is the largest difference in rainfall between a notably wet winter from December to February and a dry spring from March to May.

The UK’s largest water firm, United Utilities, which supplies North West England, has asked its customers to limit their use of hose pipes and sprinklers.

But Mick Ainsley of the GMB union said: ‘If there are problems with the availability of water to households after such heavy rainfall [over autumn and winter] then the water companies have to face the fact that the problem is part of the systems that they are paid to keep in tip top condition.’

The dry, sunny weather and continuing coronavirus lockdown are now putting pressures on water demand, prompting industry body Water UK to urge gardeners to avoid using sprinklers in the evening – though the wet winter means there is no prospect of hosepipe bans in the future.

Dr Mark McCarthy, the head of the Met Office’s National Climate Information Centre, said: ‘The most remarkable aspect is just how much some of the May and spring records for these climate statistics have been exceeded.

‘Exceeding the UK sunshine record is one thing, but exceeding by over 70 hours is truly exceptional. The sunshine figures for spring would even be extremely unusual for summer and only three summers would beat spring 2020 for sunshine hours.

‘The principal reason for the dry and sunny weather is the extended period of high pressure which has been centred over or close to the UK.’

In the exceptional conditions, water companies have seen a huge rise in demand for water from households, particularly in the evenings, with use up 20 per cent and some areas seeing peak demand of up to 40 per cent above normal for the time of year.

Along with cutting sprinkler use, steps to reduce water use include taking shorter showers, making sure the dishwasher is full and on an eco-setting before running it through, and reusing paddling pool water on the flowerbeds, Water UK said.

But the industry body stressed people should keep following the guidance on protecting their health during the pandemic, by making sure they wash their hands regularly. 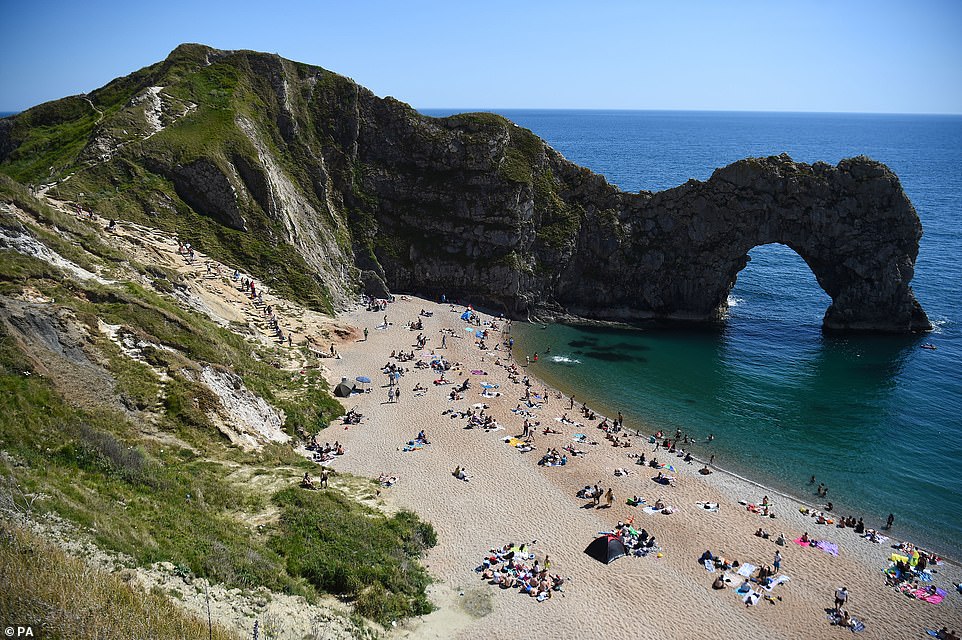 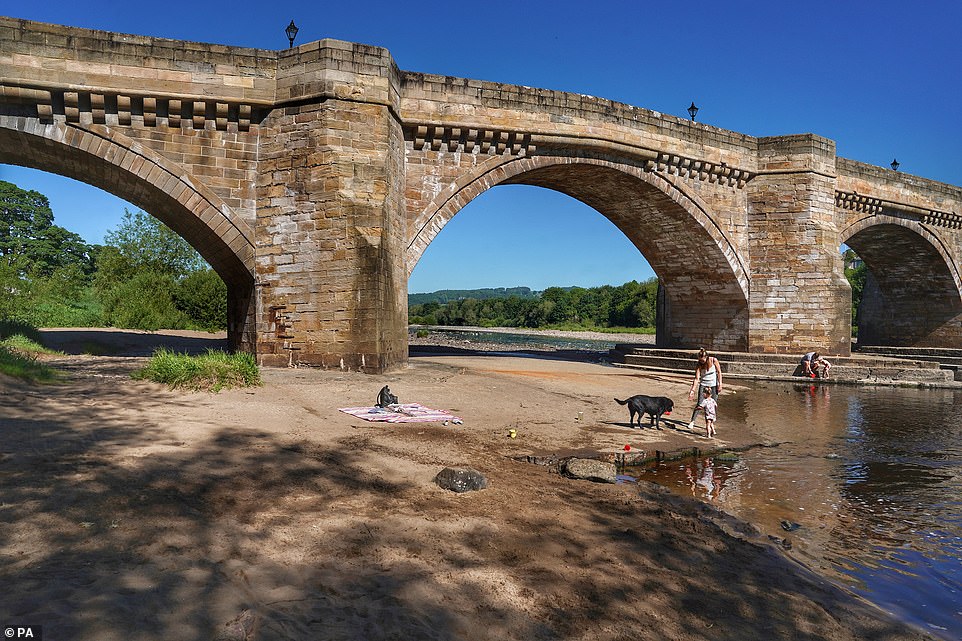 And after the wet winter, there are good supplies of water in reservoirs and there are currently no plans for hosepipe bans in the UK, Water UK said. 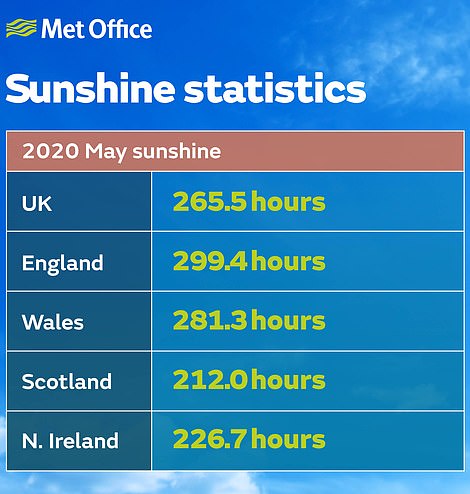 Water UK chief executive Christine McGourty added: ‘These are exceptional times and the record-breaking dry weather is a powerful reminder of what a precious, natural resource our water is.

‘With so many people at home and enjoying their gardens, water companies are seeing record demand for water, which can cause issues with water pressure. Working together, we can all make a difference right now, so let’s use water wisely.

‘We need to keep washing our hands, but make other small changes to our water use, for example cutting back on paddling pools and sprinklers, particularly at the peak times in the evening.’

Sir James Bevan, chief executive of the Environment Agency, said that in the prolonged dry weather the message to customers was to use water wisely but not to stint on hygiene measures to tackle Covid-19.

He told the Public Accounts Committee: ‘At the moment, although this is putting a lot of pressure on the water companies, the water companies are managing. But they will only be able to continue to manage if everybody is responsible in how they use water over the next few months.’

But in the committee hearing on water supply and demand, he also acknowledged that telling people to conserve water when utilities were losing so much in leaks was a problem. ‘It does undermine the ‘use water wisely’ message, so it needs to be addressed,’ he told MPs.

Britain, for, hottest, is, It’s, Set
You may also like: