British pensioner beaten and robbed after landing in South Africa

A British pensioner was pistol-whipped and robbed at gunpoint shortly after getting off a flight to South Africa on Sunday evening.

The 69-year-old man’s taxi was ambushed by three armed men at the gates of his luxury hotel in Johannesburg at around 7.30pm.

The trio ran up behind his cab as it drove through the security gates at Falstaff Boutique Hotel and pulled the doors open and aimed their guns inside.

One of the robbers opened the car boot and stole his luggage as another stole the terrified victim’s wallet and his laptop. They stole cash and valuables worth £5,350. 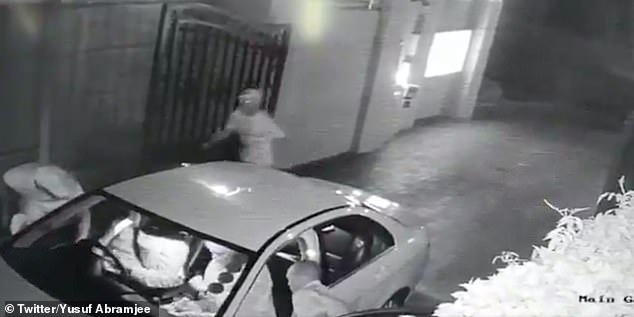 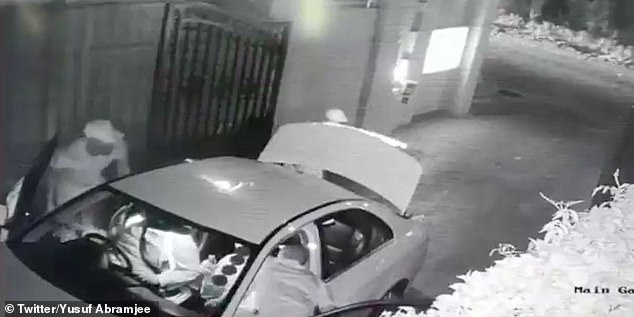 One of the robbers, his left arm outstretched, makes demands of the passenger while holding a pistol in his other hand

In all the three brazen robbers grab three items of baggage from the tourist in under a minute and then walk off through the open gates to their waiting getaway car.

A South African Police Service spokesman said that the items stolen amounted to £5,350 and said they have a team of detectives assigned to the armed robbery.

International tourists arriving at the O.R Tambo International Airport have long been the target of violent professional gangs who follow unsuspecting victims to their hotels.

Security officials believe that the gangs often have inside information relating to their targets who lay in wait for them and strike when they drive to their final destination.

The video of the robbery has gone viral on Twitter with many wondering why the taxi driver’s doors were unlocked and why he loiters at the gate after they have opened.

Many tweeted their surprise that driver had not driven straight up to the front door or been alerted by the flashing hazard lights of the robber’s car behind them or seen the robbers in his mirrors.

Zwelthu Ndlovu said: ‘The doors were unlocked? He drives pretty slow after the gates open. It stops over the sensor that detects the weight of the car so the gates can’t close’. 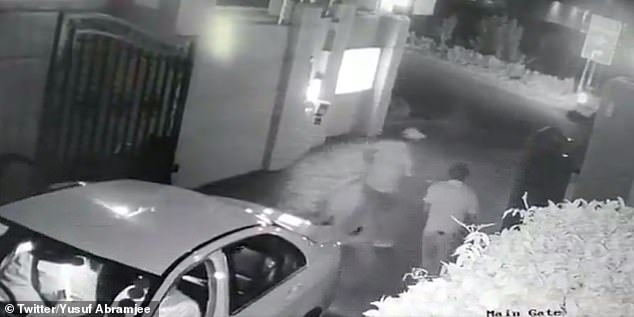 The men are seen making off with their haul of loot which amounted to £5,350 worth of cash and valuables

Others question why the hotel does not have security guards monitoring the gate to ensure guests arrive in safety.

Police Captain Brenda Muridili refused to speculate on the many similar comments on social media saying: ‘Our officers are investigating and have many lines of inquiry they are following.

‘The victim had arrived on a flight from the UK and was being dropped off by a taxi when he was approached by armed men and he was robbed of valuables worth R100,000’.

The airport is only 18 miles from the 4 star Falstaff Boutique Hotel in the upmarket area of Sandton with the UK tourist being robbed within 30 minutes of being drive away from the airport.

The hotel’s brochure promises: ‘The hotel is intimate and elegant and in a peaceful suburb where you can feel at home and relax and be yourself and have a great nosh in our English Pub’. 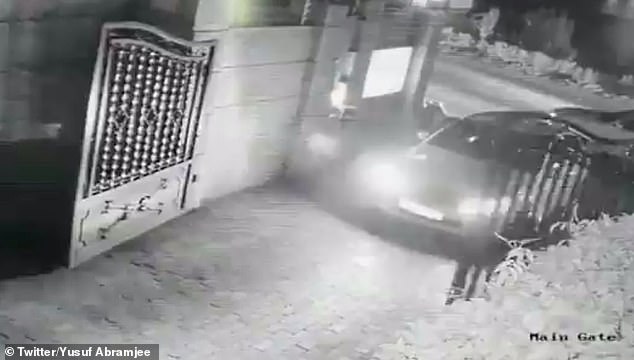 As the taxi goes through the security gate, the car full of robbers can be seen pulling up behind, its indicator light flashing 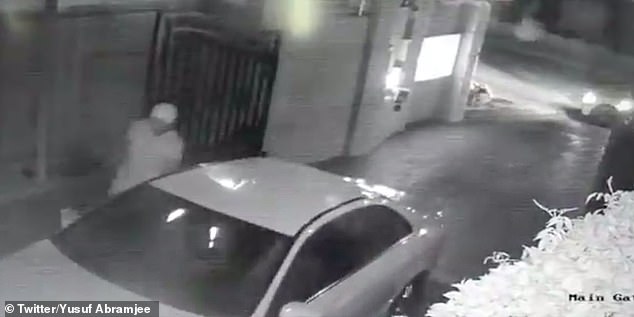 The robbery occurred at 7.30pm on Sunday and was captured on CCTV.

Wealthy tourists are regularly targeted leaving O.R.Tambo International Airport and robbed on arrival at their hotels or homes and even coach loads of tourists have been held up at gunpoint.

Twitter was ablaze with angry South African’s calling for police action and for the gang to be arrested and given heavy jail sentences to reassure visitors as the tourist season begins.

In March last year glamour model Katie Price and two her her children Junior, then 12, and Princess, then 10, were held up along with their film crew after driving out of Johannesburg. 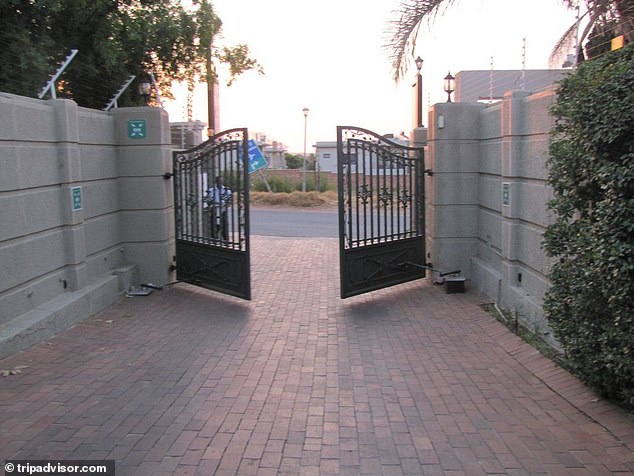 Armed carjackers ransacked their 4×4 after they had pulled up at the roadside to allow her two children to go to the toilet stealing phones, laptops, camera gear and Katie’s diamonds.

They were shocked but unhurt and between them lost items worth tens of thousands of pounds as they began the team drove to Swaziland to film TV star Katie’s fly-on-the-wall show My Crazy Life.

And, beaten, British, Pensioner, R.
You may also like: