Four British tourists have been arrested after getting into a vicious punch-up in the middle of the road in Ibiza.

The brawl started inside a taxi just outside the party resort of San Antonio around 7am on Wednesday before spilling out on to a roundabout.

A passing driver filmed two of the men hitting each other in the face as a friends tried to separate them. 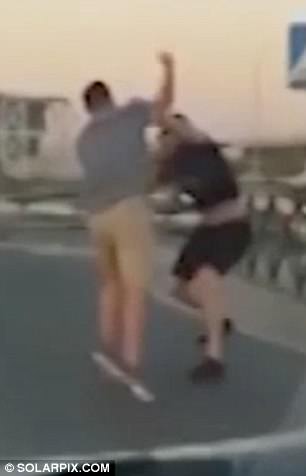 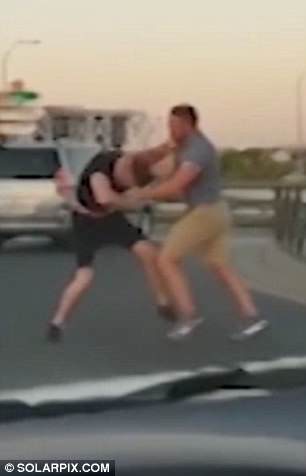 One of the men involved – wearing beige shorts and a grey top – can be seen jumping out of the taxi and hitting a second man in black shorts and a black T-shirt.

The pair continue their fight as they move towards the roundabout and cars toot their horns as they swerve to avoid them.

The man in black ends up getting the better of his opponent and pushing him back onto the taxi bonnet as he tries to throttle him.

The last of the four men to leave the taxi can be seen weighing in and putting his left hand around the throat of the tourist sprawled out on the car.

He then appears to try to separate the brawling pair as the motorist filming the fight eases past them towards the roundabout. 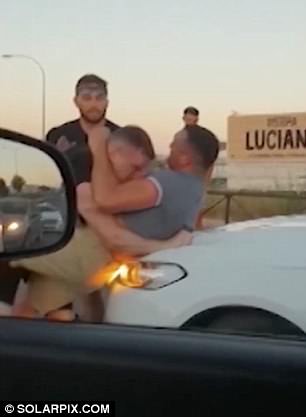 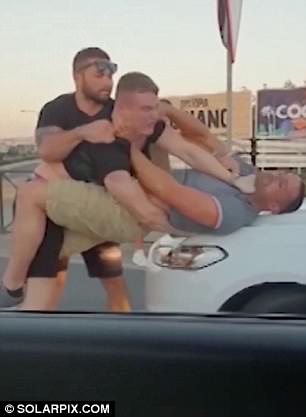 The brawl started inside a cab around 7am on Wednesday before spilling outside, where two of the men can be seen throwing punches at each-other

A spokesman for Ibiza Council confirmed the four men were British and two had been arrested at the scene by local police.

Two others fled the scene and were also arrested after tracked to the apartment where they were staying.

The spokesman said: ‘Local police in Ibiza have arrested four British tourists involved in a fight that began inside the taxi near the Sa Blanca Dona roundabout.

‘The taxi driver phoned the emergency services when the fight began.

‘Local police arrested two of the Brits on arrival and two fled the scene. One of them was subsequently arrested in the Ses Figueretes beach area and the other at the apartments where they were staying. 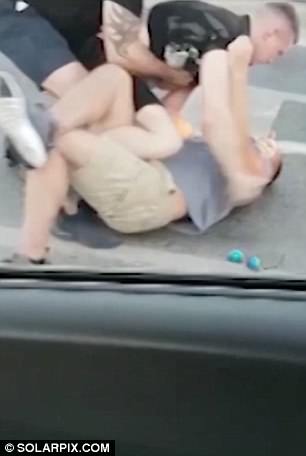 ‘The taxi driver informed the police about damage to the inside of his vehicle which will now have to be assessed.

‘The four detainees have been taken to a National Police station in Ibiza town.’

The council spokesman was not able to offer any information on why the fight started or whether the men were under the influence of drink and drugs.

The unnamed Brits are expected to be hauled before an investigating judge shortly so they can be quizzed in a closed court hearing.