Three British tourists have been killed and another is seriously injured in a horrific accident in South Africa after their vehicle crashed over a bridge and plummeted 75 feet into a river below.

The two married couples had been on their way to an airport to fly back to England after driving up the famous 450 mile Garden Route from Cape Town to Port Elizabeth on Monday afternoon.

Three of the four Brit’s were highly respected Christian charity bosses and the other was a senior teacher at elite £17,000-a-year Christ Church Cathedral School in Oxford, Oxon.

Former clergyman Peter Harris, 67, who set up the charity A Rocha International with his wife Miranda Harris, 66, was the only one of the group to survive.

Mother-of-four Miranda was killed along with their close friends Chris Naylor, 58, who is the Chief Executive Officer of A Rocha and his scholar wife Susanna Naylor, 54. 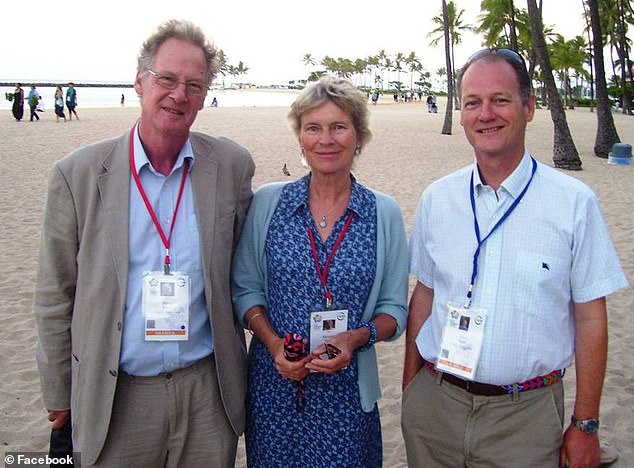 Peter Harris (left), 67, survived the crash but his wife Miranda (centre), 66, was killed along with close friend Chris Naylor (right), 58, and his wife Susanna

The upturned wreckage of the Toyota station wagon lies half submerged after crashing over the edge of the Swartkops Bridge in Port Elizabeth, South Africa 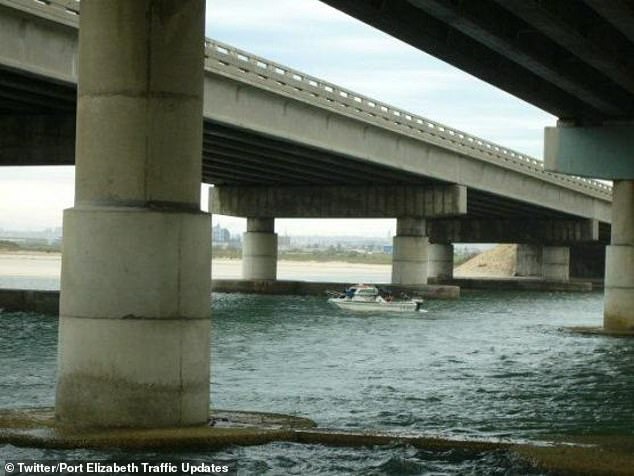 Former clergyman Peter Harris, 67, who set up the charity A Rocha International with his wife Miranda, 66, was the only one of the group to survive along with driver Thando Kalipa.

Both are critical but stable after being rushed to St George’s Hospital in Port Elizabeth after being pulled still breathing from the wreckage of their semi-submerged silver station wagon.

Peter’s wife and mother-of-four Miranda was killed along with their close friends Chris Naylor, 58, who is the Chief Executive Officer of A Rocha and his scholar wife Susanna, 54.

The foursome had been enjoying a 10 day combined adventure and working holiday in South Africa visiting A Rocha field groups as well as taking time out to enjoy wildlife safaris.

They had begun the journey home when their double cab Toyota station wagon and luggage trailer was in collision with a Chrysler Neon as they crossed the Swartkops Bridge. 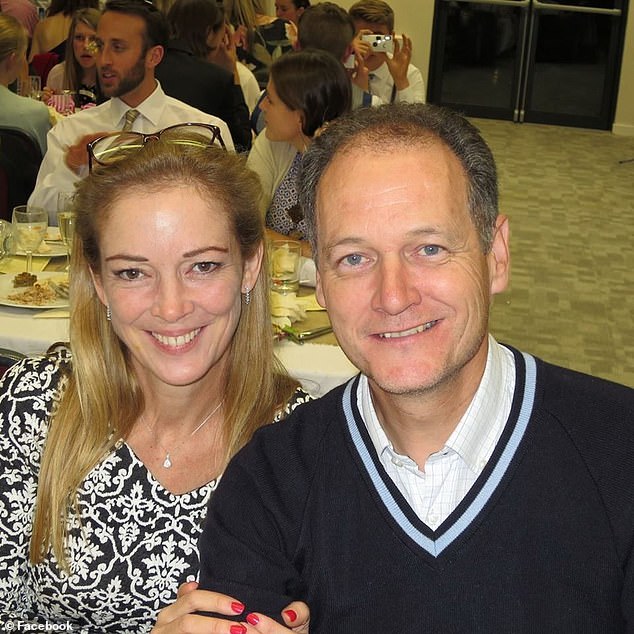 Horror crash victims Susanna Naylor, 54, and husband Chris Naylor, 58, who both died in the accident in South Africa 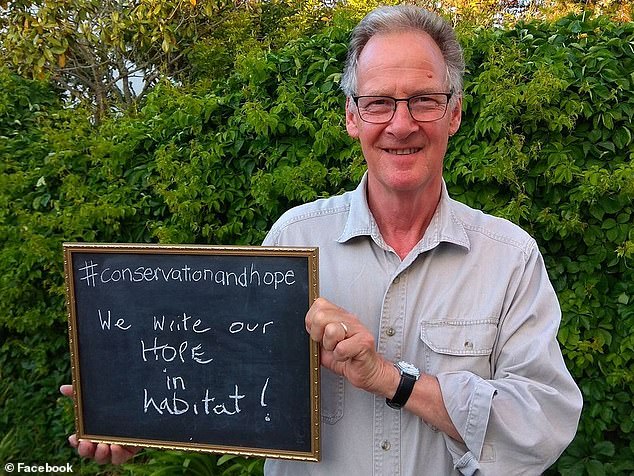 Peter Harris, 67, who was killed in the tragic car crash in Port Elizabeth, South Africa

The two vehicles were travelling in the same direction over the two lane 300m bridge when it is thought a gust of wind blew the British vehicle’s trailer into a car driving alongside them.

The resulting impact flipped the station wagon with the terrified Harris’s and Naylor’s inside over the crash barrier and plunged it 75 feet into the river below smashing onto its roof.

Fellow motorists abandoned their cars and rushed down the embankment and helped by locals waded out into the chest deep water and pulled all the occupants from the vehicle.

Tragically mother-of-three Susanna Naylor who is Head of Science at an Oxfordshire prep school and a former charity worker with A Rocha and her husband Chris were dead.

Friend Peter Harris who survived was a former English teacher at £36,000 a year Christ’s Church school in Horsham, Sussex, and a former Anglican clergyman based in Liverpool.

His wife Miranda helped him set up the A Rocha charity – which means ‘The Rock’ – which opened their first field study conservation project in Portugal 36 years ago in 1983.

Their worldwide Christian organisation has spread to over 20 countries including the USA, Brazil, South America, the Middle East, Australia, Canada and Africa and is based in the UK. 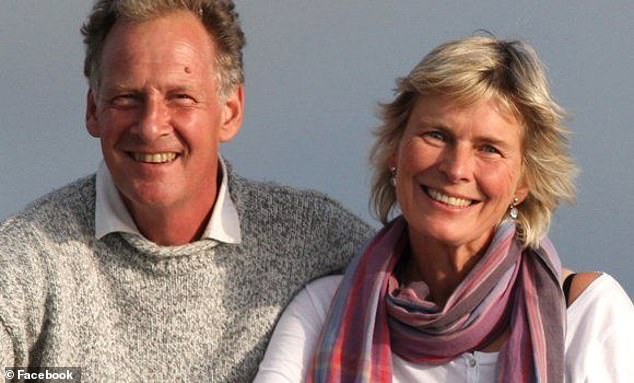 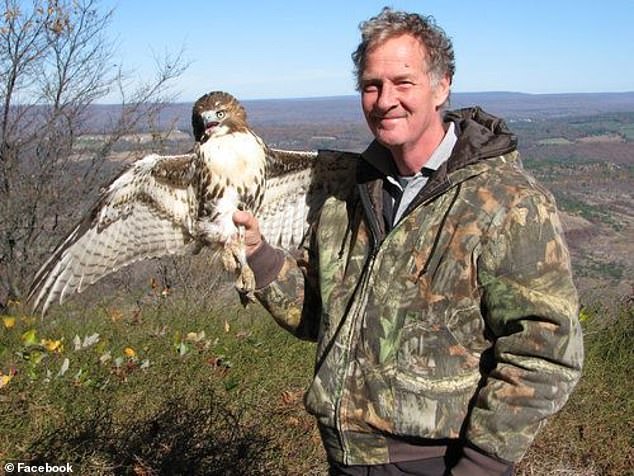 Car crash victim Peter Harris, 67, who was an ornithologist pictured here with a bird of prey

The charity has an income of £5m a year from government grants, trust funds, donations and churches and calls itself an ‘international network of environmental organisations with a Christian ethos’

The charity has 145 employees and a worldwide network of 850 volunteers and is seeking out new countries to work in.

The Harris’s had spent their life since 1983 growing the charity and moving around the world with it promoting its work living in many different countries before settling down again in the UK.

Among their many projects are the Captive Elephant Welfare Programme in India, the Atewa Forest Project in Ghana, the Kenya Bird Map Project and helping tackle the fires in the Amazon.

They live in the village of West Lavington, Wilts, in a house chosen to be close to the homes of their 4 grown up children.

Victim Chris Naylor of Oxford, Oxon, is a former science teacher who holds a Masters Degree from Cambridge University who joined the charity in 1997 and was appointed CEO in 2010.

His brilliant scholar wife Susanna earned an MA in Medicine at Cambridge University where she met him then moved south to graduate with a BA in Clinical Medicine at Oxford University.

She then graduated with an MA in Advanced Educational Practice at the Oxford Brookes University which enabled her to become a teacher and she married university sweetheart Chris in1987.

The devoted couple had been married for 32 years and after both gaining their degrees moved abroad to Kuwait to become teachers but fled after Iraq’s Saddam Hussein invaded in 1990.

When the war was over they returned to Kuwait then moved around the Middle East teaching in Jordan and Lebanon before returning to the UK in 1997 to join up with the A Rocha charity.

However Susanna missed teaching and became Head of Science at Kitebrook Prep School in the Cotswolds and had just moved to the same post at Christ Church Cathedral School when she was killed.

The historic boys school was founded by King Henry VIII in 1546 and provides choristers for English cathedrals.

The four best friends who had known each other over 25 years were being driven to the airport by a driver from the Kuzoko Lodge in the Addo Elephant National Park near Port Elizabeth.

They had spent two nights at the 15000 hectare game reserve which boasts the Big 5 of lion, leopard, buffalo, rhino and elephant enjoying daily game drives and walking safaris.

They were on the short drive to the airport when tragedy struck on the 300m long bridge over the Swartkops River below.

Eastern Cape Department of Transport spokesperson Khuselwa Rantjie said the accident happened at 11.45am on Monday and a case of culpable homicide had been opened.

The three victims were pulled from the wreckage and declared dead at the scene by a doctor and the two survivors were stretchered back up to the road and rushed to hospital.

A Rocha International spokesman said: ‘Peter and Miranda Harris, co-founders of A Rocha, and Chris Naylor who was our CEO and his wife Susanna were involved in a horrific car accident in South Africa.

‘Miranda, Chris and Susanna did not survive. Peter and the driver of the car are being treated at a local hospital and are in a stable condition and we await further news.

‘Above all, their families and friends are held in our prayers. We know that this comes as a profound shock to everyone in the A Rocha Family and to many others around the world’. 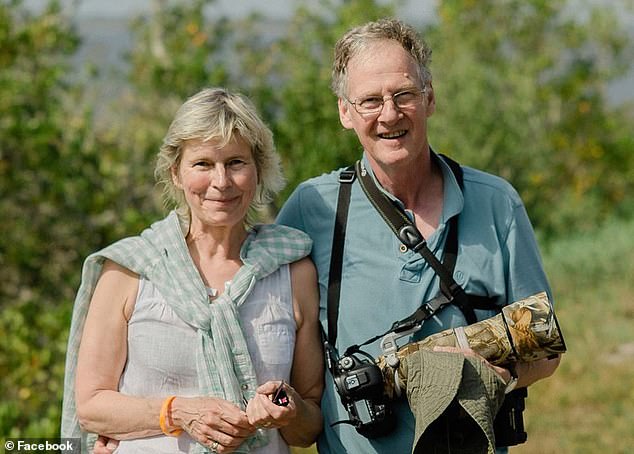 Peter Harris, 67, who survived a horrific road accident in South Africa in which his wife Miranda Harris, 66, was killed

An A Rocha member in Pietermaritzburg, South Africa, where they have a centre and who asked not to be named said: ‘I met the four of them last week and they were wonderful people.

‘The co-founder Peter said he was nuts on wild birds and said he was looking forward to photographing them at Addo and told me there were over 400 species living wild there.

‘I cannot believe that three of the nicest people have been taken from us like this and I am praying for Peter to survive. These people were all devout Christians devoted to God.

‘It can really make you wonder when people like them are taken from us in such tragic circumstances and we are all saying prayers for their children and friends in the UK’ she said.

A spokesman for Kuzuko Lodge where the four had stayed expressed their condolences to the two families involved.

The three bodies will be flown home to the UK after post mortems have been carried out to establish if they were killed by the impact with the water or from subsequent drowning.