Last summer’s catastrophic bushfires have caused platypus populations in south-eastern Australia to decline by up to 18 per cent, bolstering calls to have the species’ national conservation status changed to ‘vulnerable’.

The first study of the impact of the bushfires on platypuses also estimates about 2 per cent of Australia’s total population of the beloved species were killed in the bushfires, meaning as many as 6350 of these monotremes died. 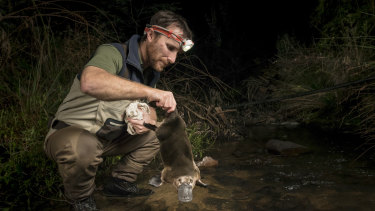 Leading Cesar ecologist and platypus researcher Joshua Griffiths returns a male platypus to a creek where it had been captured just 30 minutes earlier as part of a study.Credit:Doug Gimesy

Researchers from environmental consultancy Cesar Australia, commissioned by the Australian Conservation Foundation (ACF), found the fires burned a large area of the best-remaining platypus habitat in south-eastern Australia, affecting about 14 per cent of their habitat.

Senior wildlife ecologist Josh Griffiths and his colleagues had been undertaking widespread surveys at 142 sites, including remote forests and farmland, throughout eastern Victoria and southern New South Wales before the fires to gather data on the elusive monotreme.

“There was a real sense of grief because we knew the figure of … wildlife lost in the forest [up to 3 billion animals] and this was some of the best habitat they had remaining to them,” said Mr Griffiths.

Platypuses are somewhat buffered from a blaze, being able to retreat to rivers (although small creeks may be vapourised) or down their burrows, he said.

But after the fire they suffer from “blackwater” events, when flooding washes organic material into waterways, and a shortage of food, including the freshwater shrimp and crayfish they eat. 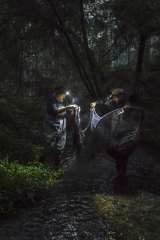 Joshua Griffiths and PhD student Tamielle Brunt pack up Fyke nets in the early morning. These were set the afternoon prior to try and capture platypusesCredit:Doug Gimesy

“We had some pretty significant rainfall that washed ash and sediment into the waterways and you get a big slug of sediment, dissolved oxygen levels and mass fish kills,” Mr Griffiths said.

A few years ago these researchers developed an easy and effective “environmental DNA” testing technique, where water samples are taken from rivers to find the tiny traces of DNA that platypuses leave behind. Citizen scientists in East Gippsland also helped to collect these water samples.

Platypuses are mostly active at night, but researchers did occasionally see them in the rivers while taking water samples or doing habitat assessment.

University of New South Wales researchers, along with the ACF, WWF-Australia and Humane Society International, this month nominated the platypus to be listed as a ‘vulnerable’ threatened species under Commonwealth and NSW processes.

Victoria’s Scientific Advisory Panel recently recommended platypuses be listed as vulnerable in that state. It concluded platypuses are "facing a high risk of extinction in the wild in the medium-term future". 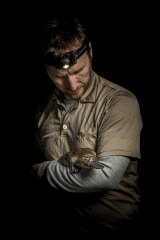 Joshua Griffiths cradles a young female platypus just before releasing it back into a stream. Credit:Doug Gimsey

Platypuses have been badly affected by the over-extraction of water from rivers, land clearing, pollution and suburban sprawl, said ACF’s nature program manager Basha Stasak. The effect of climate change in reducing rainfall in south-eastern Australia is also having an impact.

“Listing the platypus as a threatened species would be an important first step towards putting this much-loved Australian on the path to recovery," Ms Stasak said.

BUSHFIRES, on, P, platypuses, toll
You may also like: