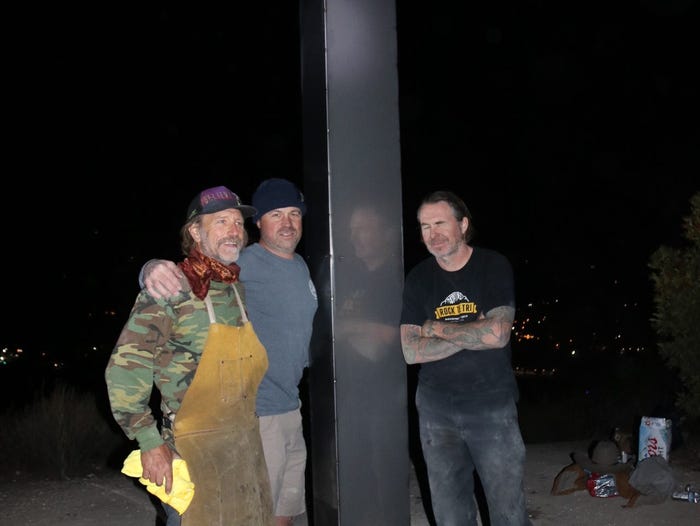 Travis Kenney and Wade McKenzie were eating enchiladas and taquitos at Pedro's Mexican restaurant in Atascadero, California, when the pair decided to build a monolith.

It was December 1, and the men were discussing the tall, metallic objects that had recently been found in Utah and Romania.

"We were talking about how bitchin' it was to see everyone out and about, and you know, where they were coming from. It was amazing that people were going that far to see it," Kenney, an artisan and builder, told Insider.

Then came his idea.

Kenney and McKenzie's monolith is now one of at least seven that have popped up around the world in the last three weeks. Named after the mysterious structures that populate Stanley Kubrick's film '2001: A Space Odyssey,' the structures have inspired fascination. A New York Magazine article even speculated, somewhat jokingly, that they're the work of aliens.

At first, the Atascadero monolith was a mystery, too. But after it got torn down, Kenney and McKenzie reinstalled it and revealed themselves as its creators.

McKenzie and Kenney picked up some steel and went to Kenney's workshop. They built the monolith with the help of Kenney's father, Randall. (The term 'monolith' is technically a misnomer, since monoliths are made of stone, not metal.)

"Three o'clock in the afternoon, we started welding this thing and building it," Kenney said.

They then called their friend Jared Riddle, who lives a 3-hour drive away in Pleasanton.

"He hauled ass down here to help us," Kenney said.

By 11 p.m., the four men had finished the triangular, roughly 400-pound metallic pillar. It consisted of a structural steel frame coated in a stainless steel skin and stood 10 feet tall.

McKenzie, Riddle, and Kenney hauled their creation two miles up a steep trail to the top of Pine Mountain. All three men are nearing 50, but regularly go mountain biking and hiking. Kenney's daughter's boyfriend, Trey Grote, followed, carrying "like 100 pounds of equipment" including jackhammers, Kenney said.

The 3rd of at least 7 monoliths

The mysterious monoliths around the world have been the subject of intense speculation since Utah state employees discovered the first one in the desert there on November 18. That initial monolith appears to have been installed in 2016 but found only recently. Since its existence was revealed, at least six other similar monuments have appeared across the world, including in the Isle of Wight, Los Padres near Atascadero, and Las Vegas. But with the exception of the Atascadero monolith, their builders remain unknown.

A leading theory reported by the New York Times suggests the Utah structure is a work by the US artist John McCracken.

A New Mexico-based artist collective called The Most Famous Artist recently hinted that it was responsible for the monoliths, and is now selling three similar structures for $45,000 apiece online. But the collective's founder, Matty Mo, has avoided directly claiming his group built or installed any monoliths. Kenney is skeptical.

"They didn't have anything to do with any of it," he said.

Kenney and McKenzie's identities were first revealed by the publication YourTango, but they didn't originally plan to come forward. Instead, they intended to anonymously complete the monolith trilogy, then remove theirs after a few days: "Put some art up there, see what people think about it, bring it back down," McKenzie said.

Kenney said he and McKenzie began biking up to the hill several times a day after the piece was installed to see their fellow residents' reactions.

"Our town got super excited about it," Kenney said.

At the monolith site, he added, there was no trace of 2020-related misery. It was a welcome break for the artists, too: McKenzie's father had died a few months prior, at least partially due to complications from COVID-19.

"Everybody's happy, talking. No politics, no COVID, all races, sizes, were walking up this hill to go see this thing," Kenney said.

The team began to reconsider their plan to take the monolith back down. Then the decision was made for them.

"Within 24 hours, some nut jobs came and took it down," McKenzie said.

The disappearance and re-emergence of the Atascadero monolith

On Thursday morning, a group of young men tore the monolith down, chanting "Christ is king!" as they erected a wooden cross in its place. They livestreamed the action.

"Christ is king in this country. We don't want illegal aliens from Mexico or outer space. So let's tear this b—- down," one man says in the video.

The men told Vice News  that they'd driven over five hours to reach the monolith. Vice also reported that footage from their car journey showed them making racist remarks and talking about white power.

"We are upset that these young men felt the need to drive five hours to come into our community and vandalize the Monolith," Atascadero mayor Heather Moreno told Vice. "The monolith was something unique and fun in an otherwise stressful time."

After learning of Moreno's frustration, McKenzie said he and Kenney reached out to her covertly.

"She kind of gives us the verbal wink, wink: 'I want it back in the same spot where it was, but I want it permanent,'" McKenzie said.

So on Friday, the group created a new monolith, this time in McKenzie's shop. It was almost identical to the first one, though a bit lighter. When they hauled it up the trail, they brought 60 bags of concrete, too.

McKenzie and Kenney installed the second monolith just before midnight, filming themselves sticking the pillar into the ground.

McKenzie's son, Chance, helped them weld the monolith to the concrete.

"We needed to let the city know that the structure we put up there was built structurally sound. It was put in the ground with 700 pounds of concrete so that it could stay there," Wade McKenzie said.

Now that the monolith is in Atascadero to stay, the team hopes it will bring tourism and commerce to the area, or at the very least some levity in a difficult year.

"What's kind of cool about the whole project is it went from '2001: A Space Odyssey' to a permanent one for the city," McKenzie said. "And you know, it just keeps morphing."