For Ray Booth, surfing is more than just a sport. It's a passion, a way of life, a therapy. Maybe even an obsession.

So when the coronavirus pandemic shut down California beaches from Mexico to Oregon last month, even that wasn't going to keep the 49-year-old Frito-Lay sales representative out of the water. 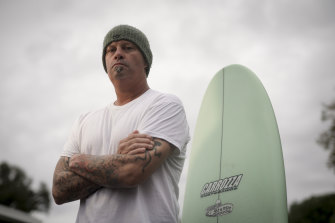 Surfer Ray Booth, pictured in Placentia, California. Up and down California’s coast, scores of surfers have been playing cat-and-mouse with authorities to sneak into the water.Credit:AP

There he was early one recent morning, carrying his board toward the ocean in his hometown of Huntington Beach, just like he's done for more than 30 years. With the pier, the beach and the parking lots closed, he had to park farther away, carry his board longer, negotiate his way around some barricades. But so what? The sun was shining, the waves were decent, and that's all a surfer needs.

"If the weather is good this weekend, I plan on going again," he said.

And he's not alone.

Up and down California's coast, scores of surfers have been playing cat-and-mouse with authorities as they sneak into the water. Or, like Booth, they just head to a shoreline where word is that authorities don't care as long as surfers keep six feet apart in the water.

"I even walked right past a lifeguard and he didn't say anything," Booth recalled. "That's how I knew it was OK."

In Hawaii, surfers have had it a little easier, with authorities shutting down beaches to sunbathers on most of the state's islands, but allowing surfers and swimmers into the water as long as they practice social distancing.

"I think surfing by its very nature reinforces social distancing," said Bruce Anderson, an epidemiologist who is director of the state's Department of Health. "I surf and and those I know who surf keep their distance from others when they're out in the water." 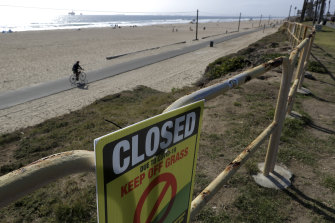 A section of Huntington Beach, California is closed to foot traffic.Credit:AP

That was a blessing to hear for Dani Kapule, who surfs the beaches on the island of Oahu every day.

"Honestly it's the only thing that's keeping me sane," she said as she stopped on a Honolulu beach to speak briefly to a reporter. "I come out here every day because if I were inside and not being active it would just suck."

New Yorker writer Willian Finnegan has described surfing in his Pulitzer Prize-winning memoir Barbarian Days: A Surfing Life as "a secret garden, not easily entered," implying those who don't venture past its gates won't ever really understand what drives people in a relentless search for the perfect wave.

Still, lifelong surfers will try to explain it to you, and when they do they pretty much say the same.

"It sounds silly but you almost have withdrawals if you don't go, you get grumpy," says Booth, who has been surfing since before he was old enough to drive. 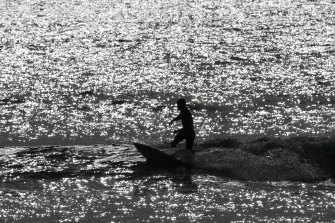 A surfer defies beach closures to ride a wave in Huntington Beach, California.Credit:AP

"It's a place of tranquility and escape," says Jason Murchison, who owns the Learn To Surf school in Huntington Beach and who has been surfing for 30 of his 36 years.

"It's awe inspiring. Just being able to sit out there and be alone with your thoughts and look at the waves break and watch sunsets and sunrises."

Both he and Booth maintain they take the pandemic seriously and would never go to a crowded beach these days.

"It's me and just one other guy out there," Murchison said minutes after climbing out of the water at Newport Beach.

"I think chances of being infected in the water are pretty low compared to being in a grocery store, wandering around in the middle of people stressing over toilet paper."

Surfers who violate Governor Gavin Newsom's beach-closure order face $US1000 ($1570) fines and possibly a year in jail, but most say they've escaped with warnings so far.

There's also been some confusion. The Governor's order applied only to state beaches, and some other public entities initially didn't close theirs.

On Wednesday, webcams operated by Surfline.com showed Northern California's popular Steamers surf spot packed with people floating side-by-side and at times almost on top of one another as they raced to catch a wave. Santa Cruz County closed the beaches to surfers later that night.

At The Wedge in Newport Beach, wave riding was banned between the hours of 10am and 5pm after local firefighters complained it was bringing too many people to the beach during those hours.

Surfline, a bible to surfing's worldwide community, has been clear in what it thinks surfers should do: "shred at home," according to its website.

One surfer who is following the rules to the letter is Surfline's director of wave forecasting.

"If the waves are decent I try to surf every day. But I haven't been in the ocean for, gosh, it's been about three weeks now," Kevin Wallis said last week.

Instead, he spends his time monitoring waves he can't ride, working out in his backyard and occasionally skateboarding – surfboard-style, of course.

In Malibu, legendary surfer Zuma Jay says disappointing waves have been keeping him out of the water as much as the pandemic. Otherwise, he says, he'd likely sneak in at midnight when no one is watching.

"The waves have been very, very small, like knee-high," he says. "That's a good size wave for Barbie and Ken, but not for Zuma Jay."

Instead, he spends his time filling online orders at his otherwise closed surf shop, attending to business as a member of the Malibu City Council where he serves under his real name, Jefferson Wagner, and looking out across the sand at a sight he says that in more than 50 years of surfing Malibu he's never seen before.