Brussels: A royal love child has demanded the title of Princess of Belgium after a 20-year fight to force the former Belgian king to recognise her.

Delphine Boel won a seven-year legal battle against Albert II, her father, who was eventually ordered to take a DNA test after constantly refusing to admit she was his daughter. 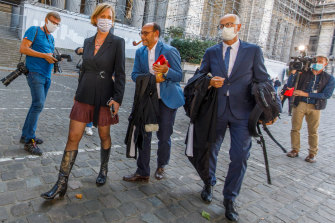 Delphine Boel and her lawyer Marc Uyttendaele, centre, leave the last hearing at the Court of Appeal in Brussels, Belgium, on Thursday.Credit:Getty Images

Boel had first asked for recognition two decades ago. Albert stepped down from the throne in 2013, which is when Boel brought her legal action. He admitted he was her father in January.

Lawyers for the 52-year-old artist and aristocrat have now lodged a demand at a Brussels court that Boel be allowed to take the title of princess, be referred to as "her Royal Highness" and bear the name of Saxe-Coburg. The title would also be extended to her children and she has demanded a share of the 86-year-old king's estate when he dies. Her half-brother Philippe is the current king.

Once again Boel was opposed by her father's lawyers, who argued that it was for the monarch, and not the court, to decide on such titles by decree. The court will hand down its judgment on October 29.

"Delphine's position isn't that she wants or doesn't want to be princess," her lawyer Marc Uyttendaele said.

"She does not want to be a child on the cheap, she wants to have exactly the same prerogatives, titles and qualities as her brothers and sisters." 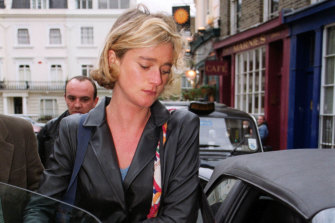 A younger Delphine Boel in London in 1999 where she has lived for more than 20 years.Credit:AP

"We assume that this case will finally end. It was painful for everyone, injuring all the parties which were involved in it, and King Albert was involved in it in spite of himself, without his asking it. So it is time for it to stop," he added.

King Albert abdicated in 2013 in favour of his son Philippe, 60, citing health reasons. He has another daughter Astrid, 58, and another son Laurent, 56.

He finally admitted he was Boel's biological father after the court ordered DNA test last January.

He only agreed to the test after the court threatened to fine him £4370 ($7696) for every day he refused and after a string of failed appeals from the king.

Jacques Boel, the man who raised her, was a successful industrialist and her mother, Baroness Sybille de Selys Longchamps, an aristocrat. 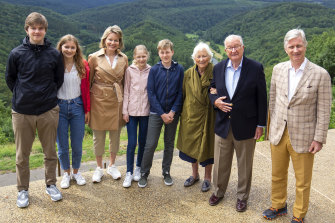 Boel's mother is reported to have had an 18-year affair with Albert before he took the throne. The then-future king was a presence in Boel's life for a time and she nicknamed him "Butterfly".

call, former, King, Me, Princess
You may also like: