Car infotainment systems and mobile phones have contributed to a ‘plateauing’ of deaths and serious injuries on Britain’s roads, ministers have warned.

Officials are alarmed that the rate of casualties has remained unchanged since 2010, despite significant improvements in the safety of vehicles.

At the moment, five people die on the roads and 68 are seriously injured every day.

The Department for Transport (DfT) yesterday announced a major review to address ‘public disquiet’ over the state of road policing.

It comes as new figures showed how Britain has the second safest roads in Europe with only Sweden recording fewer deaths per million inhabitants.

However, in a ‘call for evidence’ document, they say the failure to reduce casualties on UK roads could be a result of infotainment systems and mobile phones driving motorists to distraction. 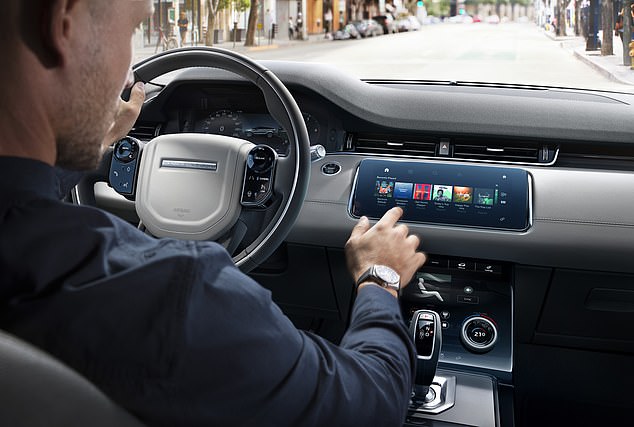 In a ‘call for evidence’ document, the Department for Transport say the failure to reduce casualties on UK roads could be a result of infotainment systems and mobile phones driving motorists to distraction. Pictured: A driver using an in car touch screen (library image) 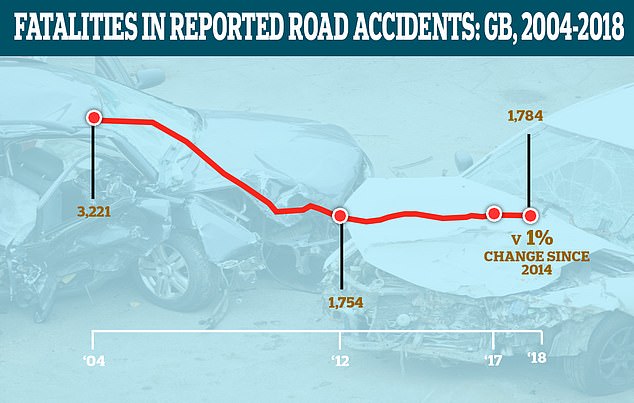 Officials are alarmed that the rate of casualties has remained unchanged since 2010, despite significant improvements in the safety of vehicles. At the moment, five people die on the roads and 68 are seriously injured every day. Picture a graph showing the figure between 2004 and 2018

They also admit laws against using mobiles at the wheel are being routinely flouted.

It says: ‘Vehicles have become inherently safer with more warning systems alerting the driver to maintenance issues and growing safety focused automation and driver assistance systems. At the same time advances in car infotainment systems and mobile phone technology mean that there are increasing sources of potential distraction for drivers.’

The Daily Mail’s End The Mobile Madness campaign has led calls for tougher penalties for drivers who use mobiles at the wheel.

New legislation was introduced in 2017 after our campaign highlighted a spate of deaths caused by reckless motorists calling or texting while driving.

However, there are concerns the laws are not being properly enforced because of plummeting numbers of traffic officers. 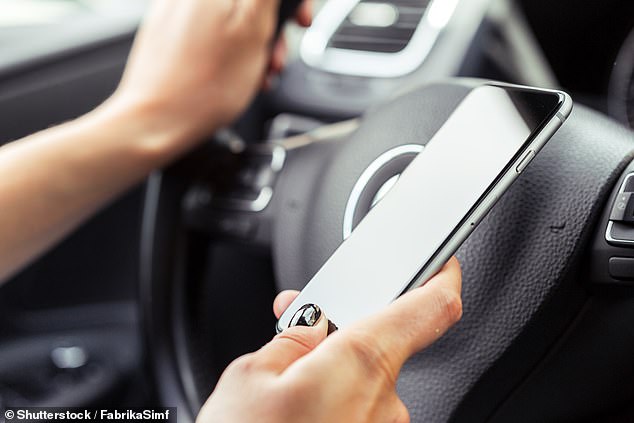 And although the new rules helped deter the menace, many drivers have escaped punishment because the law only targets those using phones for the purposes of ‘interactive communication’.

It means motorists who pick up their phone for other reasons – such as to take pictures, browse the internet or check social media – are technically not breaking the law, although ministers are in the process of updating the rules to close the loophole.

Motoring groups have also raised concerns that in-car touchscreens could be just as dangerous as using a mobile at the wheel.

In 2018 the chief executive of Highways England, Jim O’Sullivan, criticised ‘touchscreens with small, fiddly buttons’ and said the agency ‘doesn’t like them from a safety perspective’.

Tesla’s electric cars are among the growing number of models featuring cabins which are almost entirely controlled through touchscreens. 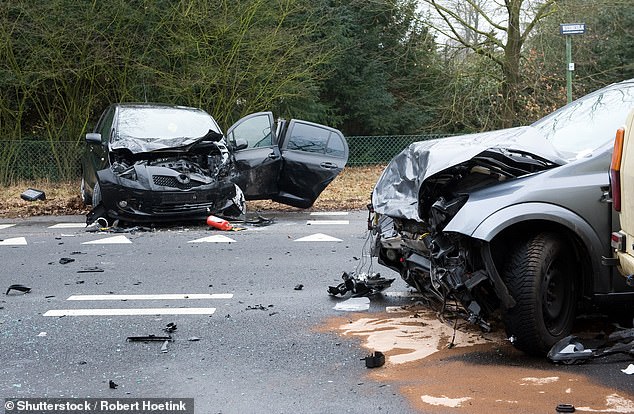 Motoring groups have also raised concerns that in-car touchscreens could be just as dangerous as using a mobile at the wheel. Pictured: Two cars crashed (library image)

While anyone caught using a mobile phone can be given six penalty points and a £200 fine, there are currently no laws restricting the use of infotainment screens.

The DfT say the lack of road police is also contributing to rising rates of other crime, including county lines drugs operations and burglary.

The document says: ‘Whether it is the illegal trafficking of people, drugs or other contraband, the road network will be used by criminals in the furtherance of their socially damaging enterprises.

‘Offenders will use the road network to facilitate the commission of crimes including smuggling and cargo theft, county lines exploitation, facilitating burglary and crimes of violence.’

David Davies, director of the Parliamentary Advisory Council for Transport Safety, said: ‘A review of roads policing is long overdue. The number of roads police officers has declined considerably, particularly over the past decade.

‘Those officers remaining often undertaken multiple roles and public safety has lost out. 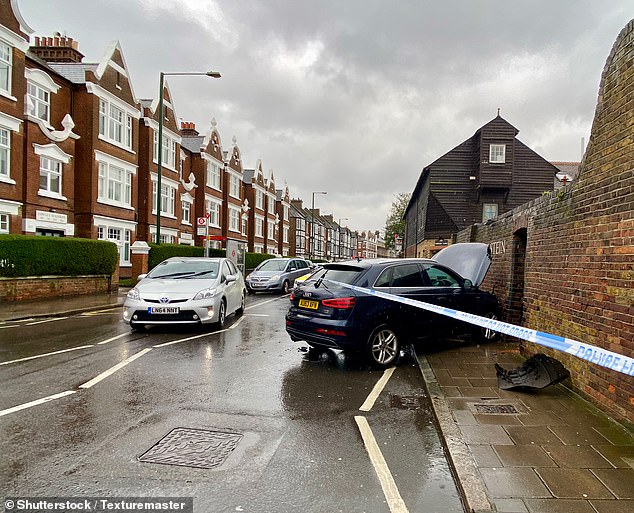 Second safest roads in Europe: Only Sweden recorded fewer traffic casualties per million inhabitants in 2017, according to a new report published this month

‘Roads policing is vital, not only to save lives but also to disrupt other criminality. There is a strong overlap in these offences and it is remarkable that successive ministers have seemed not to recognise this.’

Yesterday new figures revealed how there are 28 deaths a year on the road per million people in Britain, while in Sweden the figure is a slightly smaller 25, according to the European Automobile Manufacturers Association.

Eastern regions of Europe have the worst fatality rates on the road per million people, with Romania propping up the charts with 99 deaths.

The EU average for road casualties per million inhabitants is 49, which puts the UK way ahead of the curve.

Road deaths have fallen significantly in the last two decades, according to ACEA.

By continent, it means Europe has the safest of roads in the world.

Who has the safest roads in Europe? Road deaths per million inhabitants

The vast majority of road incidents resulting in deaths are linked to human error, the report claims,

It estimates that between 10 and 30 per cent are the result of distraction  – an issue that’s being tackled by law makers and car manufacturers with the requirement for more driver assistance systems becoming mandatory in the coming years.

This includes Intelligent Speed Assistance systems, which will be a must in all new motors from 2022 – though Volvo has already started equipping its vehicles with more intrusive speed limiters restricting its cars to no more than 112mph.

Other required features for new passenger cars in the next two years include driver drowsiness and distraction alert systems, reversing sensors or parking cameras, lane-keeping assistance and advanced emergency braking.

The European Commission expect the introduction of built-in breathalysers alongside these other driver assistance systems to save around 25,000 lives and prevent 140,000 injuries by 2038. 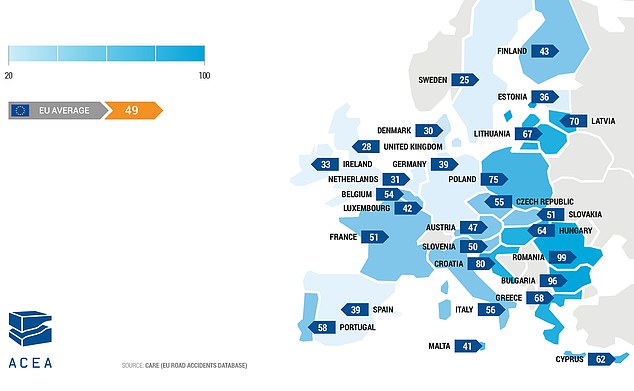 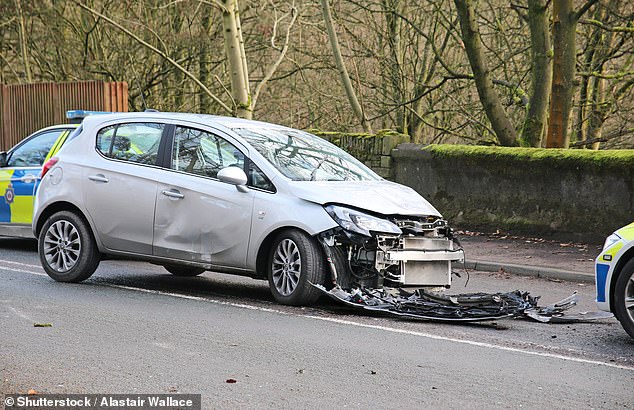 There are 28 deaths a year on the road per million people in the UK, while Sweden’s figure is 25 fatalities, according to a new report by the ACEA

EU Commissioner Elzbieta Bienkowska – previously the Polish Minister of Regional Development and Transport – said: ‘Every year, 25,000 people lose their lives on our roads. The vast majority of these accidents are caused by human error.

‘We can and must act to change this. With the new advanced safety features that will become mandatory, we can have the same kind of impact as when the safety belts were first introduced.’

While Sweden and the UK top the charts for having the safest roads, eastern Europe dominates to other end of the table.

This is caused by a combination of factors, including the poor condition of road networks and drivers using older vehicles with lower crash safety technology and performance standards.

Romania has the worst safety record with 99 road deaths per million people in the country, followed by Bulgaria (96), Croatia (80), Poland (75) and Latvia (70).

Figures released for Britain by the Department for Transport show that 1,782 were killed on Britain’s roads each year.

The statistics are for the full year 2018, when 11 fewer deaths were recorded than the year previous.

Motoring groups claimed these stats were ‘disappointing’ when released a year ago, calling for Transport Secretary Grant Shapps to make reducing the death toll on Britain’s roads one of his ‘top priorities’.

While the death toll has remained consistent for the past seven years, it is vital to point out that road casualties in the UK are among the lowest across the globe.

News of the UK’s impressive road safety statistics come as the Death By Dangerous Driving (Sentencing) Bill is set to be heard in the House of Commons on July 21, which could see those found guilty receive life sentences.

Justice Secretary Robert Buckland said: ‘We will have the time and the support of the Government to change the law in the right direction.’

And, car, info, mobiles, systems
You may also like: