Caravan of migrants are turned away for a SECOND day

Vice President Mike Pence spoke at the U.S.-Mexico border on Monday, as hundreds of Central American immigrants waited for a second day to try and apply for asylum in America.

A group of about 200 are currently waiting at the San Ysidro border crossing, after taking part in an annual caravan from the Mexico-Guatemala border to the U.S.

The group of mostly Honduran men, women and children have spent the last month crossing Mexico on foot, by bus and on top of trains.

All the while, President Trump has  derided their efforts on Twittter – saying they’re taking advantage of the country’s lax immigration laws and must be stopped. 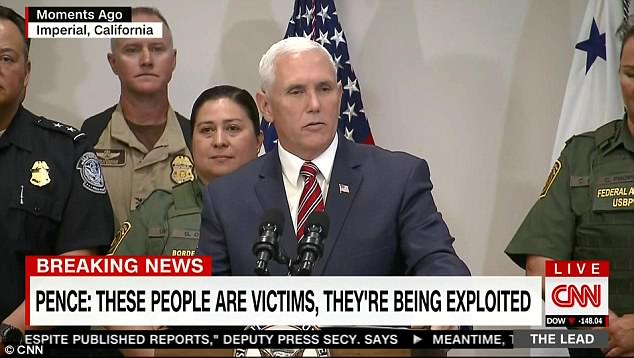 Vice President Pence was a little more sympathetic to the group when she spoke in Imperial, California Monday afternoon – about 90 miles east of San Ysidro.

‘These people are victims. They’re being exploited by open-border political activists and an agenda-driven media.

‘Men and women and children like those gathered at the border today are exploited by human smugglers, criminal and drug cartels who seize on their hardship and difficulties to undermine our laws and profit for themselves,’ Pence said.

While the caravan started out with more than 1,000 members, the group that reached the border this weekend was much smaller – about 350. An even smaller amount are deciding to petition for asylum in the U.S. – about 200. When they arrived at the San Ysidro border crossing on Sunday, the group was told that the border was at capacity and they would not be able to make their cases. The group was told the same thing again on Monday.

U.S. Customs and Border Protection Commissioner Kevin McAleenan said San Diego’s San Ysidro border crossing facility had ‘reached capacity.’ The agency said in a statement on Monday that it had no estimate when the location would accept new asylum application cases. 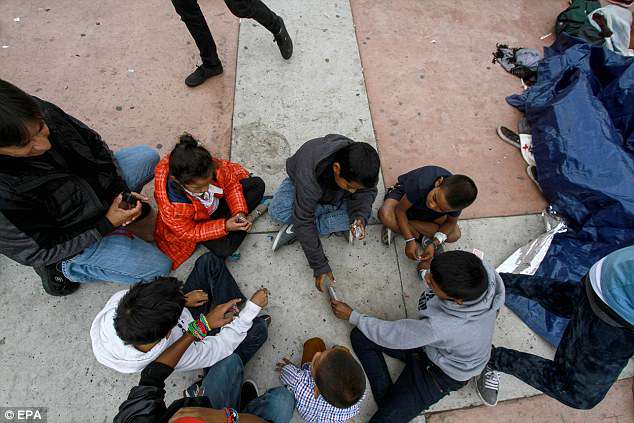 For a second straight day, customs officials said the San Ysidro border crossing was at capacity. Above, caravan children pass the time on Monday while waiting for U.S. officials to review their asylum cases 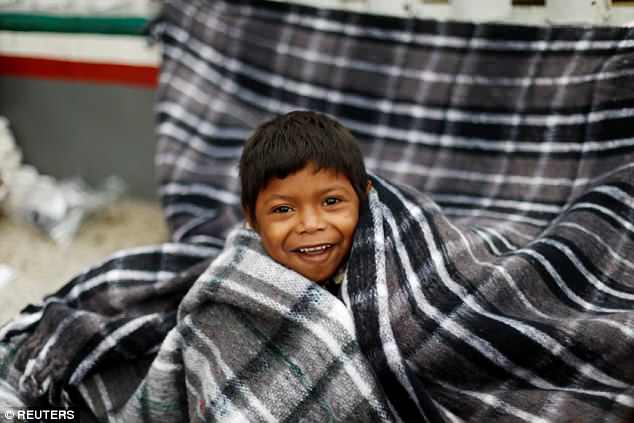 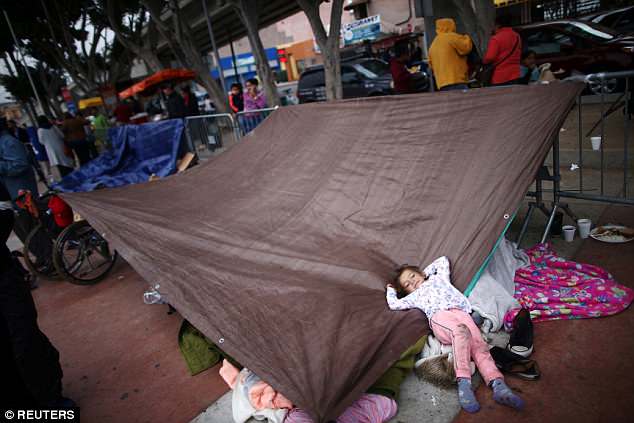 A group of about 200 slept outside the border crossing in Tijuana, Mexico overnight 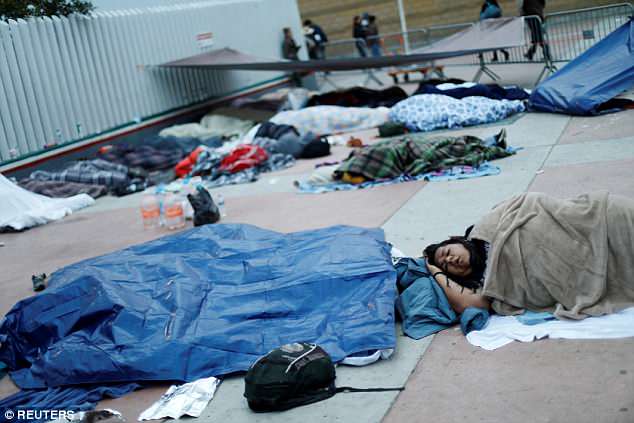 The group of migrants has spent the last month traversing Mexico by foot, bus and train. Above, a woman sleeps outside the border Monday morning 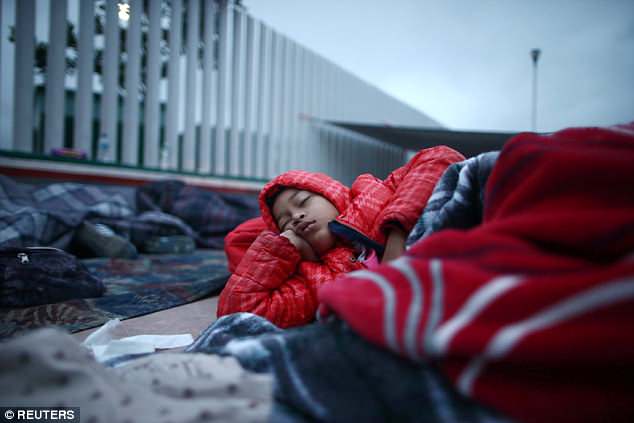 A child sleeps outside the border Monday morning, wearing a winter coat 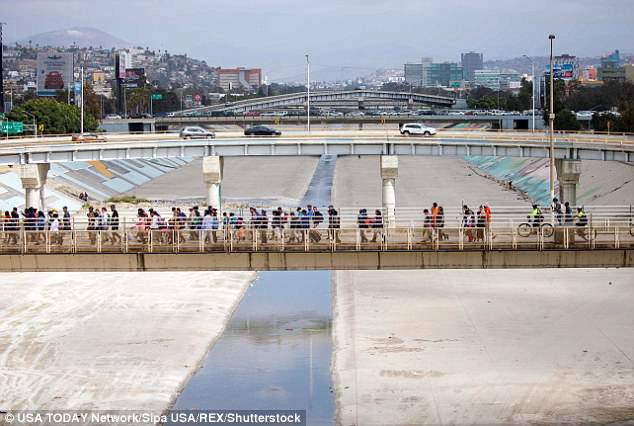 Members of the Central American caravan cross a bridge that leads to the U.S. side of the border on Monday. So far, CBP has not let the caravan onto U.S. soil 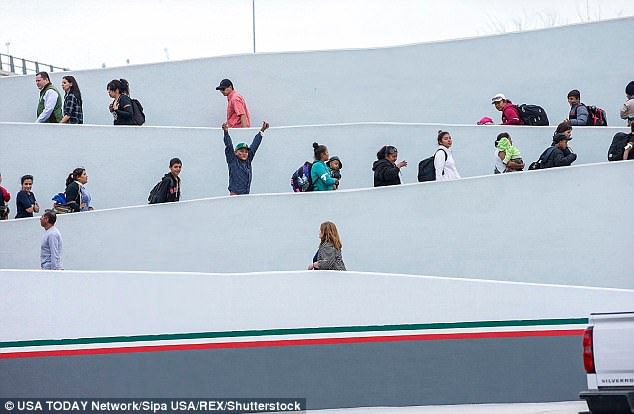 One man lifted his arms in victory as he was allowed into the border on Monday. But so far, none of the migrants have been let in to the U.S. side to have their cases reviewed

The group has gotten smaller as some members have petitioned for asylum in Mexico, while others are crossing into the U.S. illegally.

On Saturday, U.S. Customs and Border Protection issued a statement saying that in the past 24 hours ‘several groups of people associated with the Central American Caravan have illegally entered the U.S. without immigration documents by climbing over the dilapidated scrap metal border fence on either side of the San Ysidro Port of Entry’.

‘In several of these incidents, children as young as four-years-old, and in one case a pregnant female, were detected entering the United States illegally through a dark, treacherous canyon that is notorious for human and drug trafficking,’ the statement added.

The agency did not give an estimate of how many people associated with the group have crossed the border illegally or whether any were apprehended.

Another 50 asylum seekers were allowed past a gate controlled by Mexican officials Sunday to cross a long bridge but were stopped at the entrance to the U.S. inspection facility at the other end. They waited outside the building, technically on Mexican soil, without word of when U.S. officials would let them try to claim asylum. They spent the night camping on blankets and backpacks. 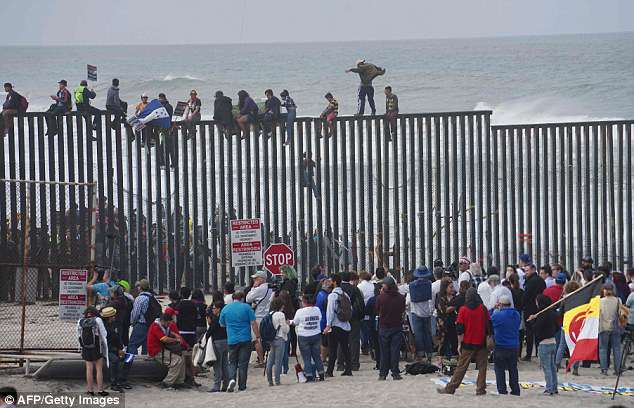 On Sunday, members of the group went to an area of the U.S. border wall that juts out into the Pacific Ocean. A few scaled the wall 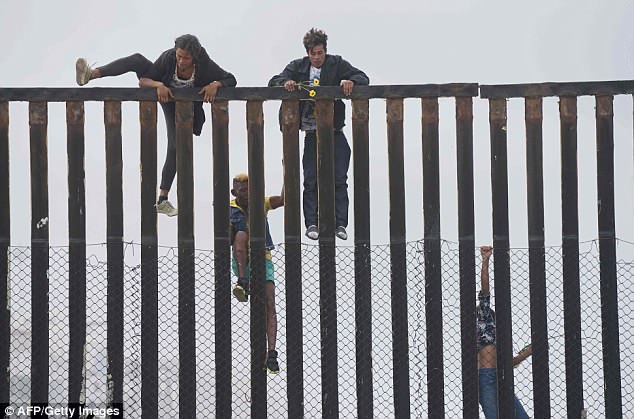 The crowd grew Monday, assembled behind metal gates that Mexican authorities erected to avoid impeding the flow of others going to the United States for work, school and recreation.

Irineo Mujica, a caravan organizer, said asylum-seekers who crossed the bridge remained in a waiting area on Mexican soil Monday. He alleged that U.S. authorities were refusing entry in an effort to dissuade people from trying.

‘When they say they reached capacity, it’s just nonsense from (U.S. authorities) so they can abandon, not attend to, and evade their responsibilities in asylum cases,’ said Mujica, of the advocacy group Pueblos Sin Fronteras.

Customs and Border Protection said Sunday that it will resume asylum processing at the San Diego crossing when it has more space and resources.

The San Ysidro border inspection facility that divides San Diego from Tijuana can hold about 300 people, meaning the bottleneck may be short-lived. The agency processed about 8,000 asylum cases from October through February at the crossing, or about 50 a day.

President Donald Trump has repeatedly criticized the caravan since it started in Mexico on March 25 near the Guatemala border and headed north to Tijuana, telling campaign supporters in an email last week that it had to be stopped. 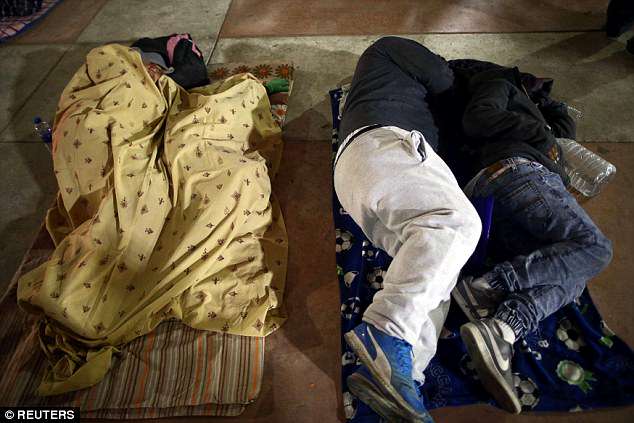 His broadsides came as his administration vowed to end what officials call ‘legal loopholes’ and ‘catch-and-release’ policies that allow people requesting asylum to be released from custody into the U.S. while their claims make their way through the courts, which can take years.

‘Catch and release is ridiculous,’ Trump said Monday at a news conference with Nigerian President Muhammadu Buhari at the White House. ‘If they touch our property, if they touch our country, essentially you catch them and you release them into our country. That’s not acceptable to anybody.’

Attorney General Jeff Sessions has called the caravan ‘a deliberate attempt to undermine our laws and overwhelm our system.’ Homeland Security Secretary Kirstjen Nielsen said asylum claims will be resolved ‘efficiently and expeditiously’ and warned that anyone making false claims could be prosecuted and said asylum seekers should seek protection in the first safe country they reach, including Mexico.

Asylum seekers did not appear to be thrown off by the delay.

Elin Orellana, a 23-year-old pregnant woman from El Salvador, said she is fleeing the MS-13 street gang, a favorite target of both Sessions and Trump because of their brutal killings committed in the United States.

She said her older sister had been killed by the gang in El Salvador, so she is attempting to join other family members in the Kansas City area.

‘Fighting on is worth it,’ she said Sunday as she camped outside the Mexican entry to the border crossing.