A group of New York beachgoers branded ‘racist MAGA supporters’ on social media after they were filmed in an altercation with Cardi B’s sister, are suing the pair for defamation.

Earlier this month the WAP singer, 27, came to the defense of younger sister Hennessy Carolina, who claimed she and her girlfriend were harassed by Trump supporters over a parking space during a beach trip in the Hamptons.

In a video of the September 6 incident shared on Instagram, Hennessy, 24, was seen engaging in a heated argument with a woman and two men, one of whom was wearing a red MAGA hat. 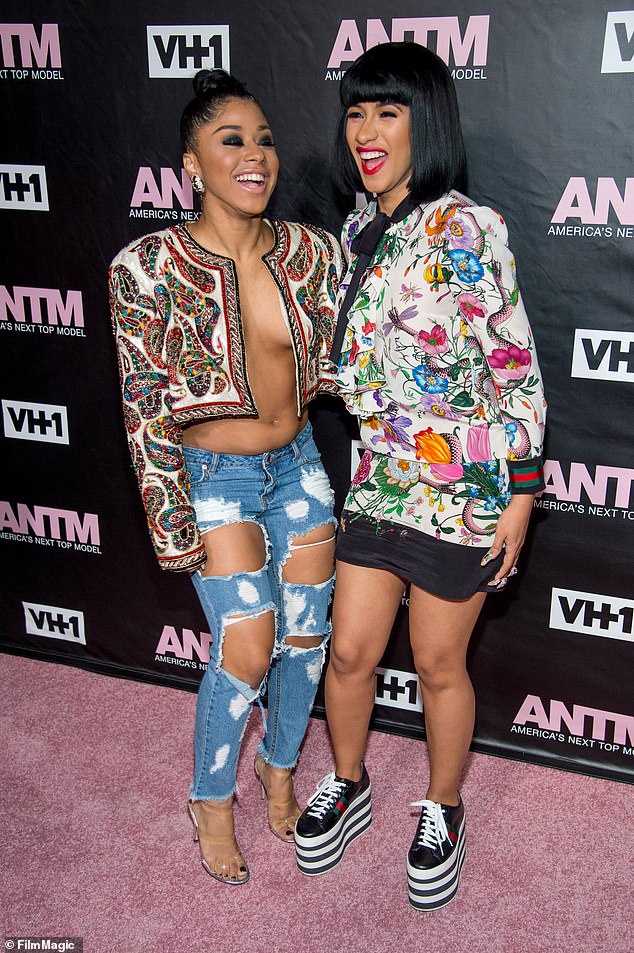 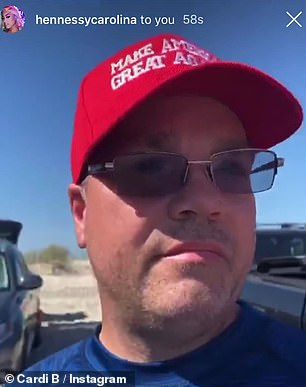 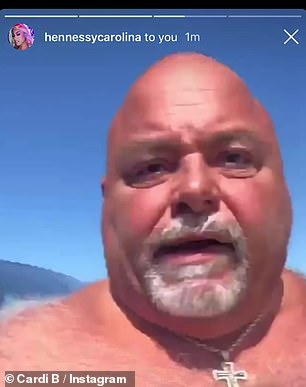 In a video shared online earlier this month, Hennessy was seen engaging in a heated back and forth with a group of beachgoers, including one man donning a ‘Make America Great Again’ cap 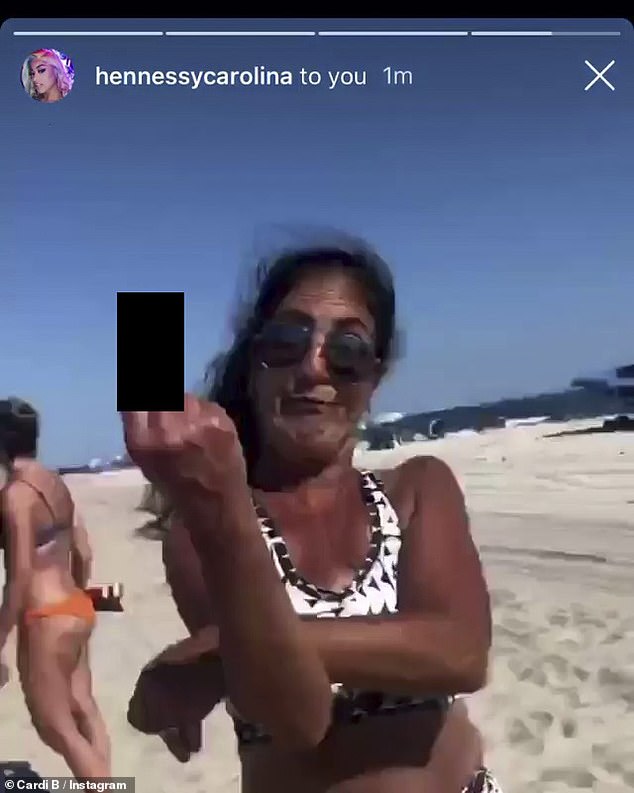 Cardi shared a video of the incident on social media, claiming her sister and her girlfriend were targeted because ‘they are a Afro/Hispanic gay couple.’ Footage showed a woman flashing her middle finger at Hennessy’s camera and then began chanting ‘Trump’ over and over again

The clip was later shared to Cardi’s 14.4million followers on Twitter, where she accused the group of targeting her sister and her girlfriend Michelle Diaz ‘because they are a Afro/Hispanic gay couple.’

‘My sister couldn’t even park her car today without this man harassing her girlfriend soon as the camera came out they started being sweet. TGIS (sic) BRAVENESS IS COMING FROM THEIR LEADERS ENERGY’, Cardi said.

‘Meanwhile not only you got racist [MAGA] supporters that are [lynching], racist cop shootings and killing black men all cause their leader make them feel like they could do so,’ claimed Cardi B in an Instagram post.

Cardi, Hennessy and Diaz have been named as defendants in a defamation lawsuit filed by the group of beachgoers in Suffolk County, ABC7 reported. 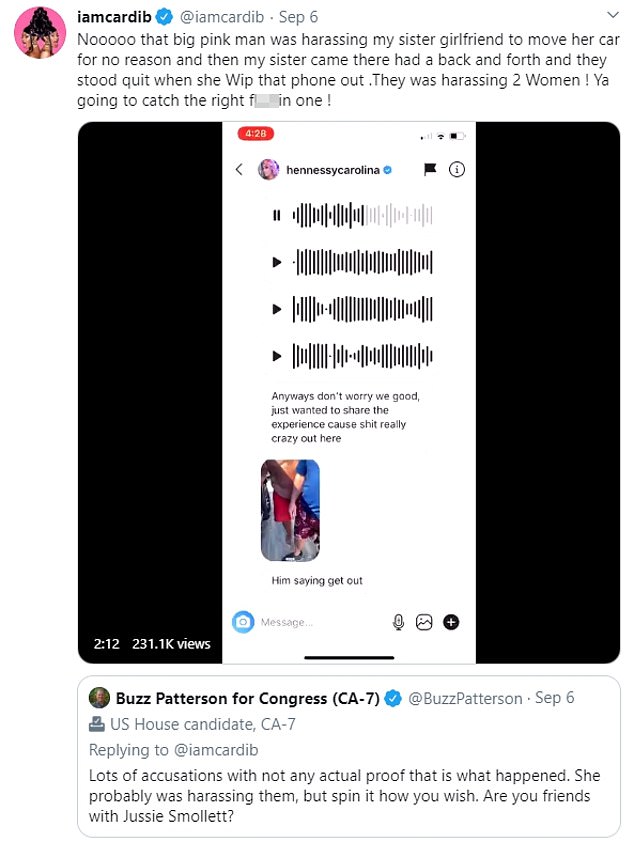 ‘These peaceful Suffolk County residents were quietly enjoying a Sunday at the Smith Point beach with their families, when rap celebrity Hennessy Carolina suddenly approached them, raging, spitting, insulting, assaulting, defaming and threatening them, all the while videotaping them because one of them wore a MAGA hat,’ beachgoers’, attorney John Ray said.

‘Then Hennessy, Cardi B and celebrity model Michelle Diaz deviously edited the videotape and published the edited version all over social media, across the world for all to see, and maliciously falsely labeled these residents and their families as ‘N…s’ and as racists,’ he added.

Ray claimed the group are now living ‘in fear’ and their reputations ‘have been ruined’ after ‘real threats of harm were made.’

The plaintiffs are expected to address the incident in a press conference on Tuesday.

The expletive-riddled footage showed two men – one donning a ‘Make America Great Again’ cap – and one woman engaging in a heated back-and-forth with Hennessy at a beach.

‘Get your vehicle out of here,’ demanded one of the alleged aggressors, to which Hennessy hastily replied: ‘Get the f**k out of my face!’

‘Ok, don’t EVER come to a female [unintelligible] while I’m not here,’ shouted Hennessy, who was referencing to her girlfriend. 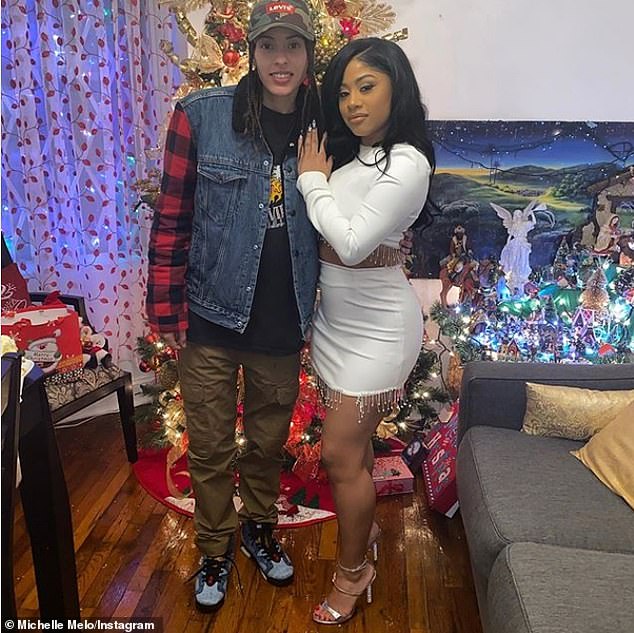 Hennessy, 24, claimed she and her girlfriend Michelle Diaz (pictured) were targeted by the group because they are an ‘Afro/Hispanic gay couple’

One man in the video, who was shirtless, insisted that he ‘did not come near [Hennessy]’ as he continued to remain uncomfortably close to her and her parked vehicle.

Hennessy shouted numerous times for the two men to ‘back the f**k off [her] car,’ which, oddly, prompts the female member of the group to approach her.

Hennessy and the woman engaged in a close shouting match for a few seconds, before the woman began slowly retreating.

‘You’re blocking some people,’ she exclaimed, to which Hennessy replied: ‘I hope you know that you will be online and your husband.’

The woman flashed her middle finger at Hennessy’s camera and then began chanting ‘Trump’ over and over again.

Hennessy, who boasts 6.8million followers, shared the entire video of the explosive interaction on her Instagram Story, which her sister Cardi B later reposted.

She returned to Instagram after the altercation gained traction online to express how ‘sad and angry’ she still was over the ‘racism’ she allegedly experienced.

b, by, Cardi, defamation, sued for
You may also like: