Paris: A survivor of the 2015 attack on satirical publication Charlie Hebdo has told a French court how the gunmen said "Allahu akbar" ("God is greatest"), then shot him with their Kalashnikov rifles.

Simon Fieschi was the first employee the two gunmen encountered when they entered the newspaper's Paris offices. He said that after being shot he lost consciousness, and the gunmen moved on to other targets.

"It was all very quick for me," said Fieschi, 36, who limped to the witness box using a crutch but declined an offer to take a seat, saying he preferred to testify standing. 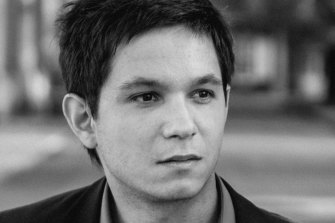 "I remember the door opening violently, and gunshots. I remember a man who said: 'Allahu akbar,' and then, 'We don't kill women'," said Fieschi, who was in charge of the publication's digital platforms.

"I lost consciousness, which is without doubt what saved my life," he said. One bullet went into his neck and damaged his spinal column, leaving him with constant pain and reduced mobility.

Fieschi was speaking in the second week of a trial of 14 alleged accomplices of the Islamist gunmen who targeted the satirical publication and a kosher supermarket, killing 17 people. The gunmen themselves were killed in subsequent police raids. 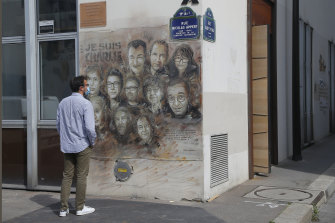 A pedestrian looks at painting by French street artist Christian Guemy, a.k.a. ‘C215’ in Paris – a tribute to the victims of the satirical newspaper Charlie Hebdo.Credit:AP

The publication was targeted by Islamist radicals, according to prosecutors, because it had published cartoons of the Prophet Mohammad. Depictions of the prophet are considered blasphemous by Muslims.

On the day of the attack, when Fieschi regained consciousness the shooting had already finished and many of his colleagues lay dead or wounded. It was not until much later that he was told what had happened to his co-workers.

"The image that stays with me is of a trail of blood in the corridor leading to the newsroom," he said in court. "At the time I didn't really understand what it meant."

Earlier this week a caricaturist who was forced at gunpoint to open the door to the extremists described the moments of sheer terror and the feelings of guilt and powerlessness she endured long afterwards.

Corinne Rey had tears in her eyes but her voice was clear. She had left the weekly editorial meeting a little early to go downstairs for a smoke when the gunmen came in the door, calling her by her pen name, Coco, and ordering her to take them to the Charlie Hebdo offices. She walked upstairs between the two men armed with assault rifles.

Only at the moment when Rey described leading them accidentally to the wrong floor of the building did she falter, crouching down in the courtroom and holding her arms over her head in a replay of her reaction as the gunmen realised her mistake.

Two of the gunmen opened fire on the group seated around the offices as soon as they entered, but told Rey they were sparing her life as a woman.

“This is something I will live with the rest of my life. I felt so powerless, felt so guilty,” she said.

Now, she said, “I expect justice to be done here. It is the law of men that rules, and not the law of God, as the terrorists would have it.”

Charlie, Gu, Hebdo, says, Survivor
You may also like: